Cameroon: A hospital at the heart of the North-West crisis

More than three years of armed violence in the English-speaking regions of North-West and South-West Cameroon have led to a humanitarian crisis, severely damaging local health systems even as medical needs soar. Access to healthcare has become a daily challenge. Today, Doctors Without Borders (MSF) is one of the few humanitarian organisations still providing medical care to people in these regions. 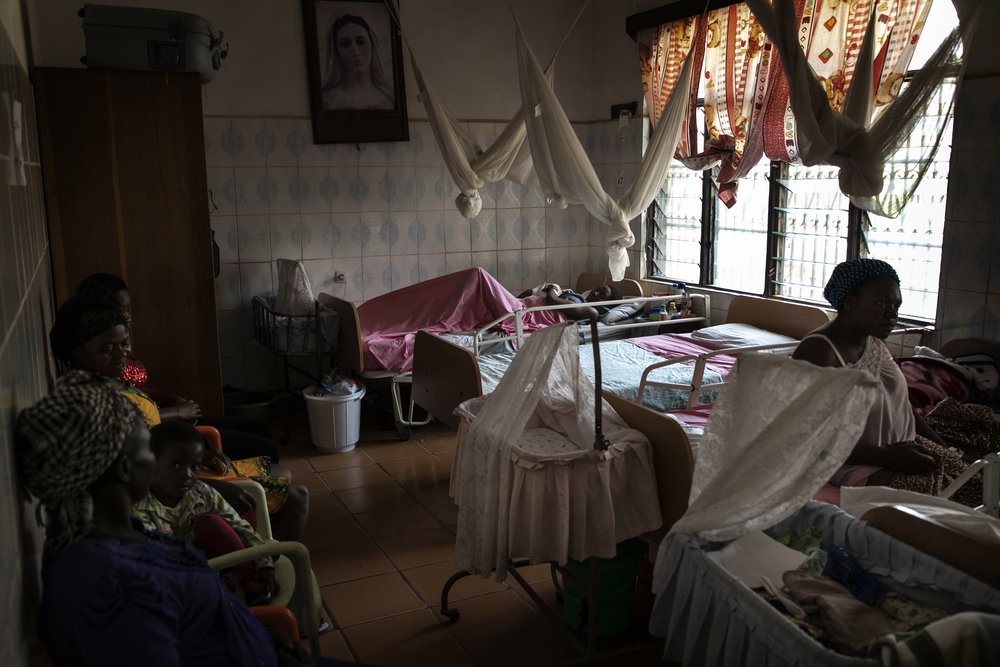 It is early on a March morning and the alleyway leading to Saint Mary Soledad hospital, in Bamenda, the capital of the North-West region, is still quiet. In front of the entrance, a few sellers, seated behind their wooden stalls, patiently await the arrival of their first customers. Under the sun, already high in the sky, everything seems calm and serene.

It is hard to believe that only the day before gunshots rang out for hours in this area. For over three years, armed violence between state and non-state armed groups has been a daily reality in North-West and South-West Cameroon, with dramatic repercussions for hundreds of thousands of people.

Acts of violence have increased and the armed raids, attacks, kidnappings, torture and sexual violence have not spared the civilian population. 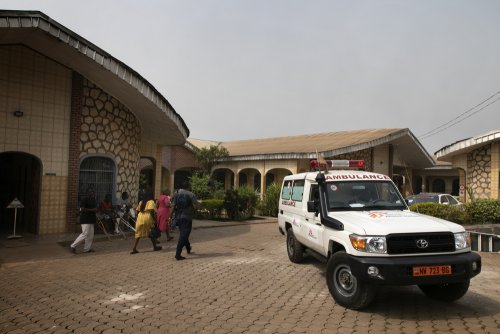 According to the latest UN statistics, nearly 680,000 people have been displaced by the violence in North-West and South-West Cameroon1 and a further 59,000 have fled to neighbouring Nigeria.

2 More than two million people need humanitarian assistance as a result of the physical and psychological consequences of the crisis. However, many are struggling to access healthcare.

“Ongoing violence and movement restrictions mean most health centres have been deserted by their staff or are no longer able to function normally,” says Shahbaz Khan, MSF project coordinator for the North-West region. “Humanitarian aid is limited due to insecurity, and people have quickly found themselves unable to find healthcare. Displaced communities, in particular, now have little or no access to healthcare and must endure alarming conditions." 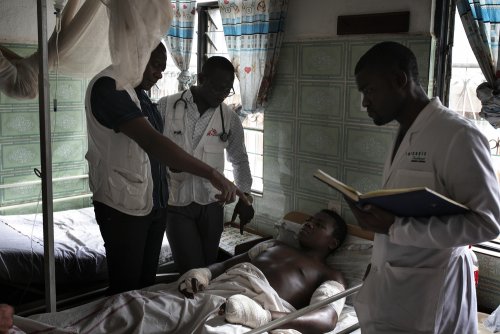 In 2018, the worsening situation prompted MSF to launch an emergency medical response in North-West Cameroon.

Saint Mary Soledad hospital is one of the facilities supported by MSF in Bamenda. In this 76-bed hospital, our teams offer free medical care to pregnant women and young children, and medical, surgical and psychological care to people who have experienced intentional and non-intentional trauma, including victims of car accidents, sexual violence, armed violence, burns and domestic accidents. 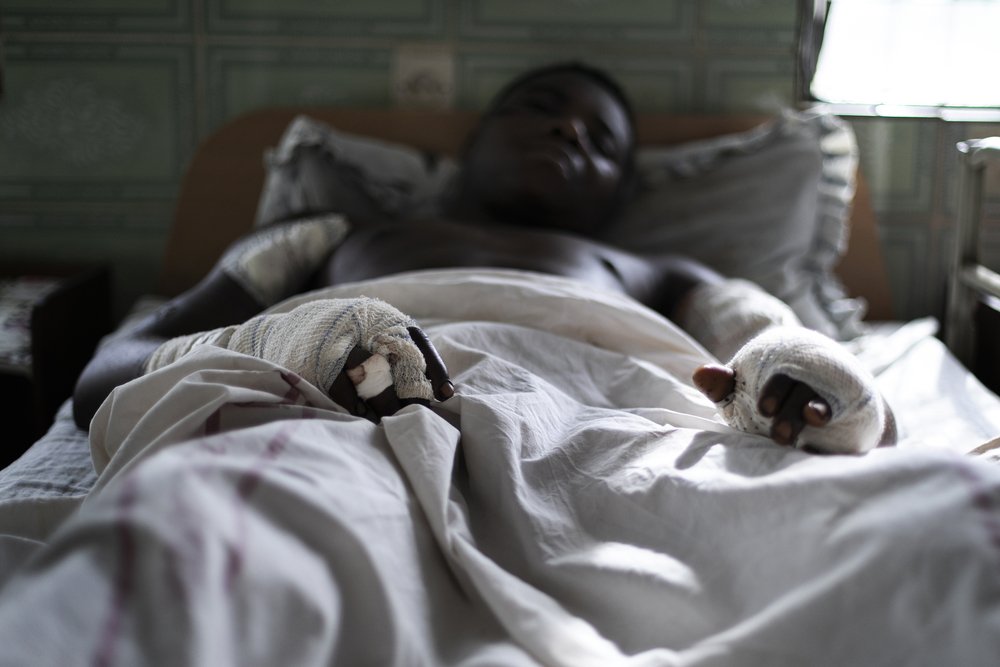 Albert Masias/MSF
A few days ago, Paul was attacked on the road by armed men who tortured him and shot him five times. He survived and is being treated by MSF doctors and surgeons at St Mary Hospital in Bamenda, North-West Cameroon.

MSF also set up a 24/7 ambulance service to transport patients in need of urgent care. These are most often childbirth and paediatric emergencies, but also include other medical conditions such as patients with perforated ulcers, severe malaria, respiratory infections or snake bites. Around five per cent of patients transported by ambulance are victims of intentional violence.

In sharp contrast to the quiet alleyway, the busy situation inside the small hospital reflects the scale of the needs and the lack of available healthcare across the region. Like every day, the facility is packed. Every bed is occupied and the outpatient consultation room is full.

"I called the MSF ambulance because I know they are the only ones who can move around during lockdowns. Fortunately, the vehicle arrived quickly. Barely an hour after calling them, my daughter was born. Without the ambulance, we could both have died." 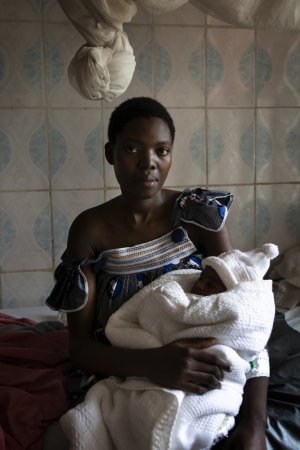 Loveline is lying in her bed in the maternity ward. She arrived early this morning to give birth to her daughter.

“I live in one of the most dangerous neighbourhoods of Bamenda. Our local clinic is no longer open”, she says. “When I felt the contractions start last night, I was really worried. Especially as movements are prohibited on Mondays in Bamenda, so I didn’t know what to do.”

Bringing Loveline to a health facility was vital as she has sickle cell disease, a blood disorder that increases the risk of death during childbirth.

"I called the MSF ambulance because I know they are the only ones who can move around during lockdowns. Fortunately, the vehicle arrived quickly. Barely an hour after calling them, my daughter was born. Without the ambulance, we could both have died." 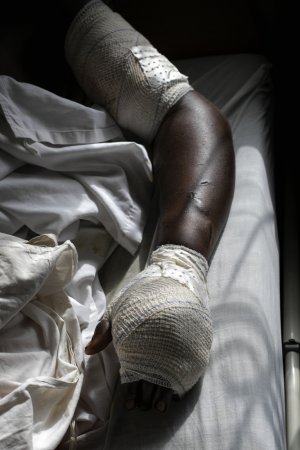 Three days earlier, Paul was also brought to Saint Mary Soledad hospital. The young farmer had been attacked by armed men who tortured and shot him several times, after accusing him of being a supporter of their enemies.

Having survived his injuries, he managed to get help from a passer-by and was taken to a public hospital. But the hospital could not provide him with care he needed, so they referred him to MSF.

"Paul arrived here with five bullets in his body," says Dr Jifon. "One in each hand, two in the arm and one in the thigh. Since his arrival, our surgeons have operated on him twice. He is now out of danger. His left hand was in a very poor condition, but we managed to save it.” 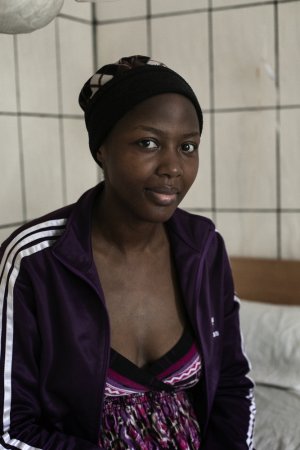 Ornella, a 27-year-old university student, was injured in a motorcycle taxi accident last November. The MSF team tried to save her leg for over three months, but in the end it had to be amputated.

"I never normally use motorcycle taxis, but I needed light bulbs so I could study and I was scared of walking that evening as there had been many attacks in my neighbourhood," she recalls.

"On the way, a car crashed into my taxi full speed. The car’s driver took me to the nearest clinic, but it was not open. We went to the regional hospital, but they didn't have an orthopaedic surgeon. Instead, they called the MSF ambulance to bring me here.”

During Ornella’s stay, MSF surgeons carried out several operations to save her leg. "Unfortunately, the damage caused by the accident was too severe and there was no alternative; we had to amputate," says Dr Jifon.

“This is always an extremely difficult decision to make given the huge social impact it will have. How to go on with studies? How to find a job? How to build a family?”

“The team here did all they could,” said Ornella “Since the amputation, everyone here, not just the psychologists, has been supporting me so much. I will leave the hospital in a few days and I hope I will be able to rebuild my future." 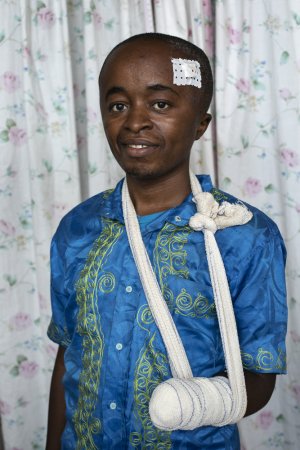 Felix, 23, will also live the rest of his life with the impact of the trauma he recently endured. Three weeks ago, Felix and his family were attacked in the village where they were sleeping, having already been forced from their home by the fighting.

His family managed to escape, but he was caught. His attackers held him on the ground and cut off his left hand with a knife before leaving him there unconscious.

"I lay bleeding on the ground for two hours before my sister dared come back for me," he says. “We hid in the forest for two weeks. I was given traditional remedies, but my arm became infected. We eventually decided to leave the bush and go to a health centre.

There, they could do nothing for me, they just put a bandage on it. The infection worsened. That’s why we came to Bamenda. On the road here, someone told us that the doctors in Saint Mary Soledad could help me."

When he arrived, Felix was very weak and had to be hospitalised for six days so that the doctors could treat the infection and begin providing psychological care. Today is the first time he has come back to the hospital for a follow-up visit since he left last week.

Given the terrible attack he suffered, Felix’s disarming smile during the medical check-up gives goosebumps. "Felix is impressive," says Dr Jifon during the follow-up visit. "His wound is healing well and there is no longer any trace of infection."

In each room, every patient’s story highlights the critical context and the urgent need to increase access to healthcare in the region. 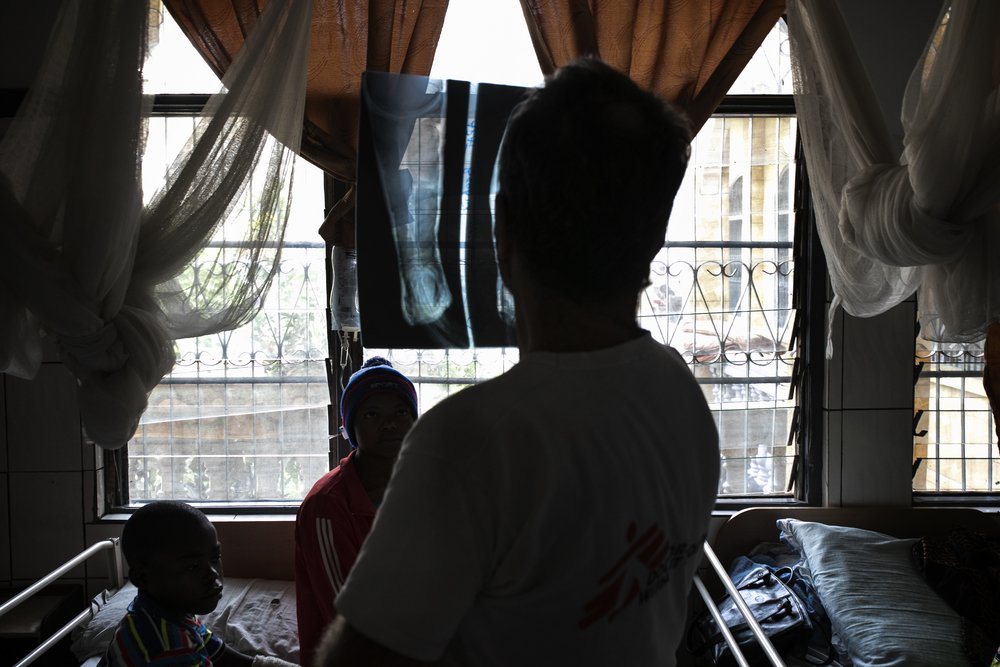 “For many of them, direct or indirect victims of the current crisis, the presence of MSF here is vital,” says Shahbaz Khan. “In this region, as in many others around the world, we are one of the too few humanitarian organisations on the ground providing healthcare to those living here. In an area marked by regular attacks on humanitarian staff, this support is hard to provide, but people know that we treat our patients impartially. Responding to urgent health needs is our only concern. Viruses, bullets and infections do not care which side of the crisis you are on. Neither do we.”

A few weeks later, the COVID-19 pandemic reached North-West Cameroon, adding another health emergency to the already dire situation. While MSF immediately started supporting the COVID-19 response, other life-saving activities at Saint Mary Soledad hospital have not stop, as calls for a ceasefire remain largely unheeded. Violence and displacement continue, in an increasingly desperate situation for the people who are paying a high price in one of the most neglected humanitarian crises in the world.