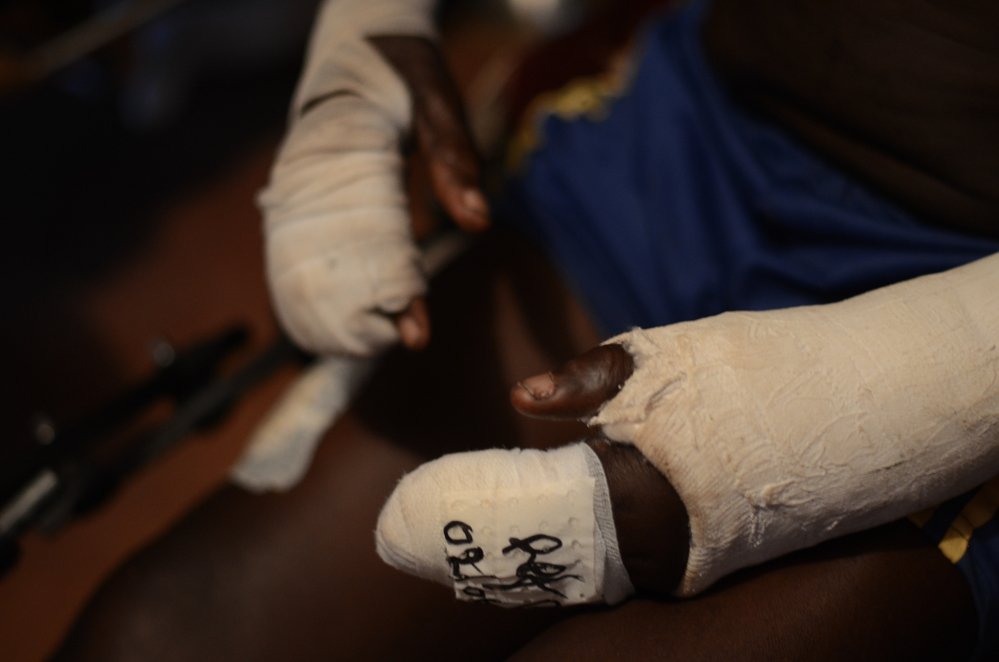 In Bria, as in other places in Central African Republic (CAR), fighting opposing various armed groups is increasingly accompanied by attacks against civilians.

We hear from patients who have survived the violence and see how MSF responded to the consequences of fighting that occurred between 15 and 18 May 2017.

Thomas is sitting in a ward in Bria hospital. All his fingers on both hands have been amputated, his left arm is broken and an external fixator supports one of his legs after machete blows cut through his thigh almost to the bone.

"It was 8 in the morning on Tuesday May 16. I was home with my family and friends staying with us. They forced their way in. Armed with machetes and clubs, they pushed the women out and beat us up. " 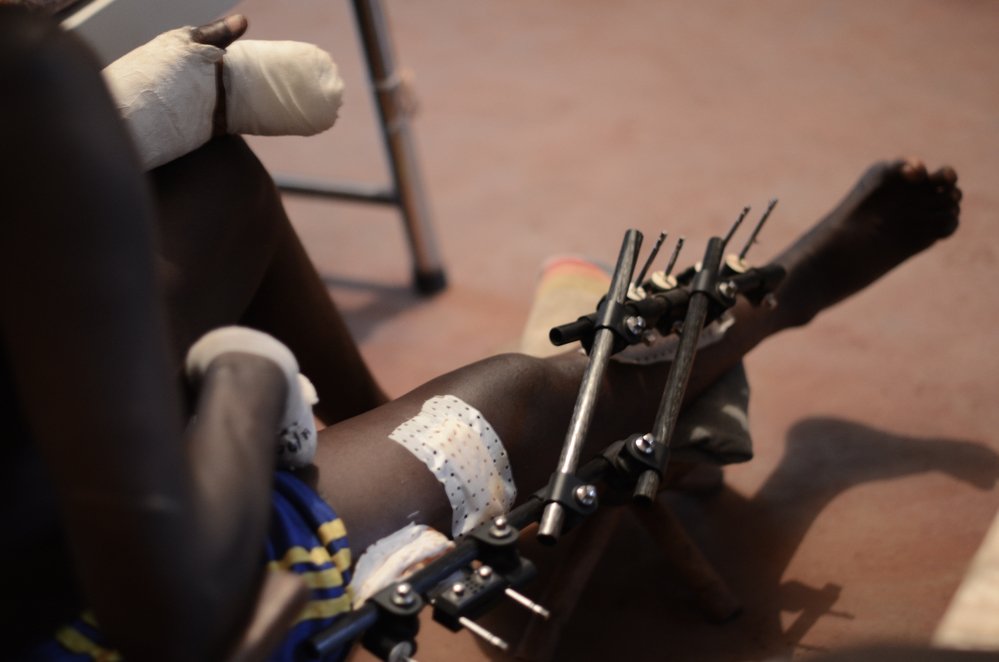 Natacha Buhler/MSF
Thomas is 65, maybe 70 years old. On Tuesday May 16 he was at home with friends and family when men armed with machetes and sticks attacked at 8 am. They accused Thomas and the other men to be Anti-Balaka. Thomas’s fingers were chopped off, his arm broken and he was hit with machetes. His leg was open to the bone. Thomas is one of the 44 wounded MSF treated at the hospital between May 15 and May 18.

"They said we were anti-Balaka, but I’ve been a safari guide for almost 40 years”, exclaims 65 or maybe 70 year-old Thomas — just one of the victims of the fighting that shook the town between 15 and 18 May 2017.

Called “sparkling Bria” because of the region’s numerous diamond mines, the town’s 47,000 inhabitants is controlled by different armed groups.

It appears that in the country there is no longer any distinction between civilians and combatants, a fact people are only too aware of and the reason why they flee at the first opportunity.

"I've lost everything. My Family and I have found refuge for now in the hospital, but if we have to leave, we'll go int othe forest. We're not going back to our neighbourhood"
thomas

Whole neighbourhoods of Bria have been emptied of their inhabitants, their houses bearing traces of the fighting: bullet holes, walls blackened by fire, homes without roofs. 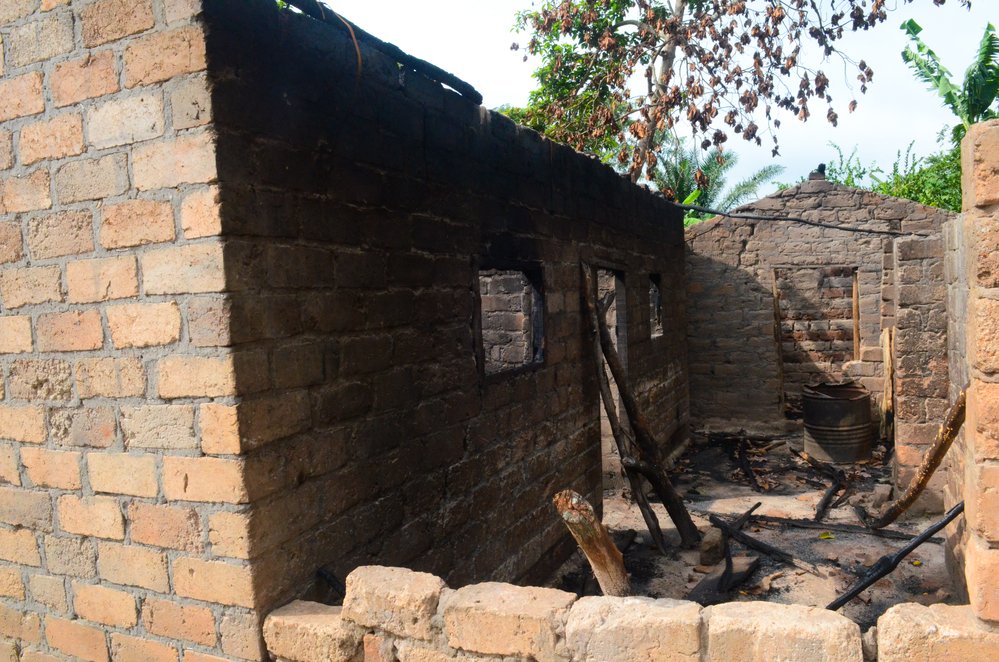 Natacha Buhler/MSF
During the May 15-18 fighting several neighbourhoods were looted and burned down. Many of the inhabitants sought refuge in PK3. They have nothing to go back too.

“I’ve lost everything. My family and I have found refuge for now in the hospital, but if we have to leave, we’ll go into the forest. We’re not going back to our neighbourhood”

Like Thomas and his family, around 6,000 people prefer to sleep overnight in the hospital compound where hospital staff co-habit with the displaced and their market stalls.

Around 41,000 people — over 85% of Bria’s population — have fled their homes. Most of these newly displaced have sought refuge in PK3 displacement site where they hope to be safe.

The camp was set up to accommodate 3,000 people after fighting broke out in November 2016; 25,000 people are there now, and their numbers continue to grow daily. 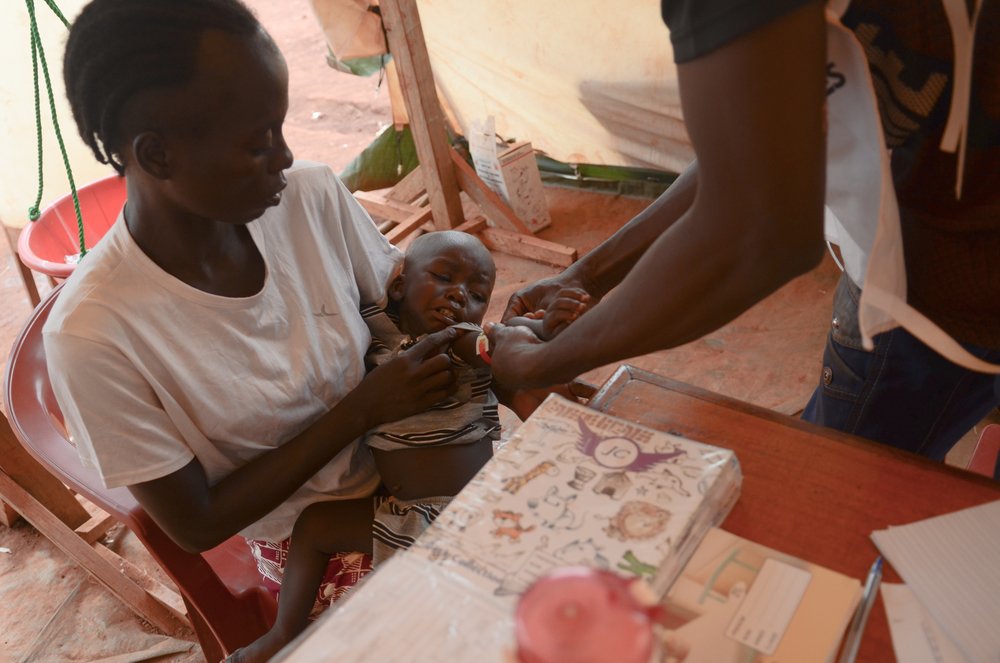 Natacha Buhler/MSF
MSF is doing mobile clinics on PK3 IDPs site six days a week. They provide care for children under 15. The main pathology is malaria, as we are in the malaria season and people are sleeping outside without protection. Severe cases are transferred to Bria hospital. The team provided 600 consultations during the two last weeks of May.

MSF has increased the mobile clinics it launched in PK3 camp last November for children under the age of 15 years. During the past two weeks, the teams have given over 600 consultations, principally for malaria.

MSF is also providing water, as the shortage of latrines and water on the site could prove catastrophic in the event of an epidemic.

The humanitarian response is slow in coming to Bria and new arrivals have yet to receive basic necessities, such as plastic sheeting and soap.

Acute paediatric cases are referred to the hospital where, between 15 and 18 May 2017, MSF treated 44 wounded patients, one of them Thomas.

These attacks against Thomas and this family are just some of a growing number of incidents in Bria and east CAR where civilians are increasingly targeted.

All the country’s communities are vulnerable in a cycle of violence that feeds on a climate of repeated attacks and reprisals.