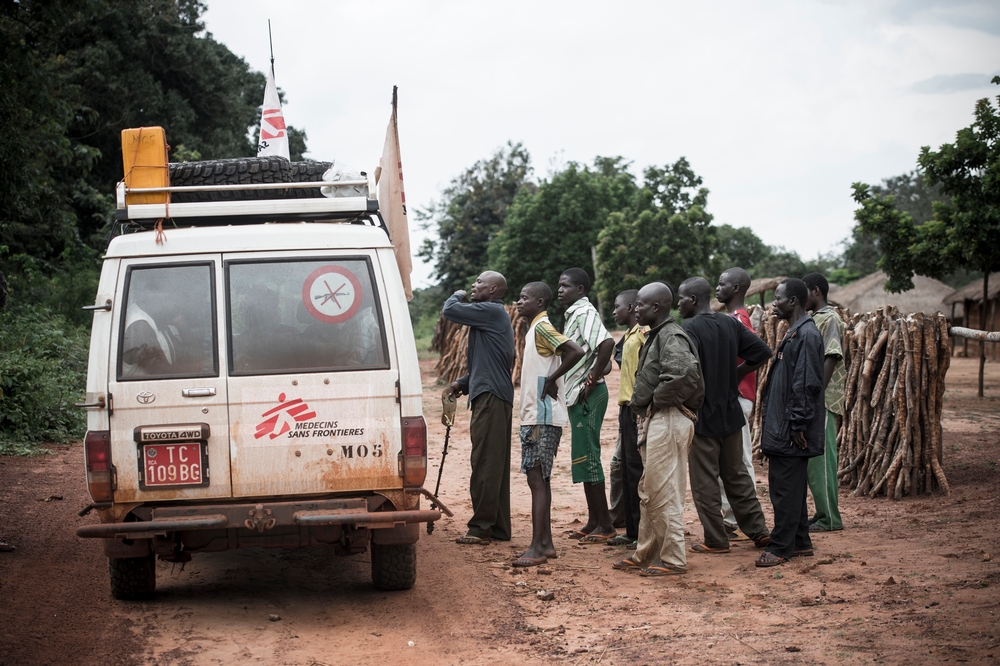 Paul Brockman has just returned from Central African Republic (CAR), where he worked as head of mission for Médecins Sans Frontières/Doctors Without Borders (MSF) for four months.
Paul came back deeply concerned by the extreme levels of violence he witnessed during his time there. Bambari, in the centre of the country, where MSF supports the surgical and pediatric wards at the regional hospital, recently joined the list of cities brutally attacked by different armed groups, again leaving people without access to medical care when they need it most.

What has happened in Bambari since mid-May?

The first new wave of heavy fighting in Bambari started on the morning of May 15. The tension in CAR is so high at the moment that it only takes one small spark for things to quickly explode. This time the trigger was the bodies of two men that were found the day before on the road south of Bambari. That evening 300 people had already moved to the hospital thinking that it could be a safe shelter. And suddenly, the next morning, we started hearing gunfire all over town and wounded began arriving at the hospital. Entire families wounded by gunshots.  During that week Bambari was in a state of war. From mid May up to mid June, 36 people were injured but MSF fears that the number is much higher, as many could not reach the hospital.
Can we still talk of a conflict between Muslims and Christians in CAR?
No, the conflict in CAR is much more complicated than a war between Muslims and Christians. There are many more active armed groups now than there were during the 2013 to 2014 conflict and the alliances between them tend to switch very quickly depending on the area. This is about more than religious tensions; it’s about access and control of resources and influence. In such a conflict, the first to suffer are always the civilian population; abandoned to their fate.
Bambari was one of the last supposedly calm towns in CAR, declared a “weapons-free zone” in 2017. Why did it explode again and so violently?
Bambari was an artificially calm island in the middle of a raging sea, surrounded by fighting. And this new wave of violence didn’t come out of a vacuum. The town seemed calm because MINUSCA [the UN stabilisation operation in CAR] forced the armed groups out of the town a year ago and declared it a city free of weapons. But that just meant those groups move to nearby villages around the city and stayed there looking for other means to make money, like taxing displaced people or stealing from them and the communities living in the area. Then on 15 May the shooting touched the city again.
Which are the main consequences for the population?
A chief concern for us in Bambari at the moment is that this explosion of violence is creating a lot of health needs among the local population. Some people took refuge in the hospital and thousands fled across the Ouaka river to areas further away from where the fighting was happening. But that put them further away from available health centres. Access to the hospital is a major concern as road blocks have temporarily prevented the sick and wounded from reaching it.
What are now the main medical needs in Bambari?
The minute you are forced from your home or from whatever shelter you have, you are more exposed to everything. Malaria is the single most common disease that we treat people for in CAR, and since many people had to flee and are sleeping in the open, the risk of being bitten by a mosquito increases exponentially. After the fighting in mid-May, our teams set up mobile clinics eight kilometres west of the town where people fleeing had sought safety. On the first day, 120 patients tested positive for malaria, out of the 165 treated that day. Two new cases of meningitis were also confirmed.
Is MSF currently able to work in Bambari and support the people there?
It is very difficult. Things got worse on May 30 when the MSF house in Bambari was robbed by armed men in the middle of the night. Thankfully, our staff there were not seriously injured. After that we decided to evacuate most of the team to Bangui, the capital. The hospital has seen two violent incursions of armed men who entered the compound without hesitation, looking for enemies among the patients or taking their own people out before other groups could come to kill them. A small MSF team remained in Bambari and, after reviewing the current security situation, we decided to send a surgical and medical team to support them and help the wounded that, right now, can’t get surgery services.  From June 15, we were able to resume both surgical and medical activities but there are still health facilities which are not functioning.
Are humanitarian workers and medical facilities not respected anymore in Bambari?
Having armed men enter and shoot in the hospital and taking patients from their beds is totally unacceptable. The hospital should be a place where everyone is welcome. People need to feel safe coming to the hospital and be sure nobody will harm them there and that’s not the case in Bambari. If that’s occurring, no one can work or be a patient there. And that’s incredibly frustrating for our teams.

DONATE TO OUR EMERGENCY FUND >