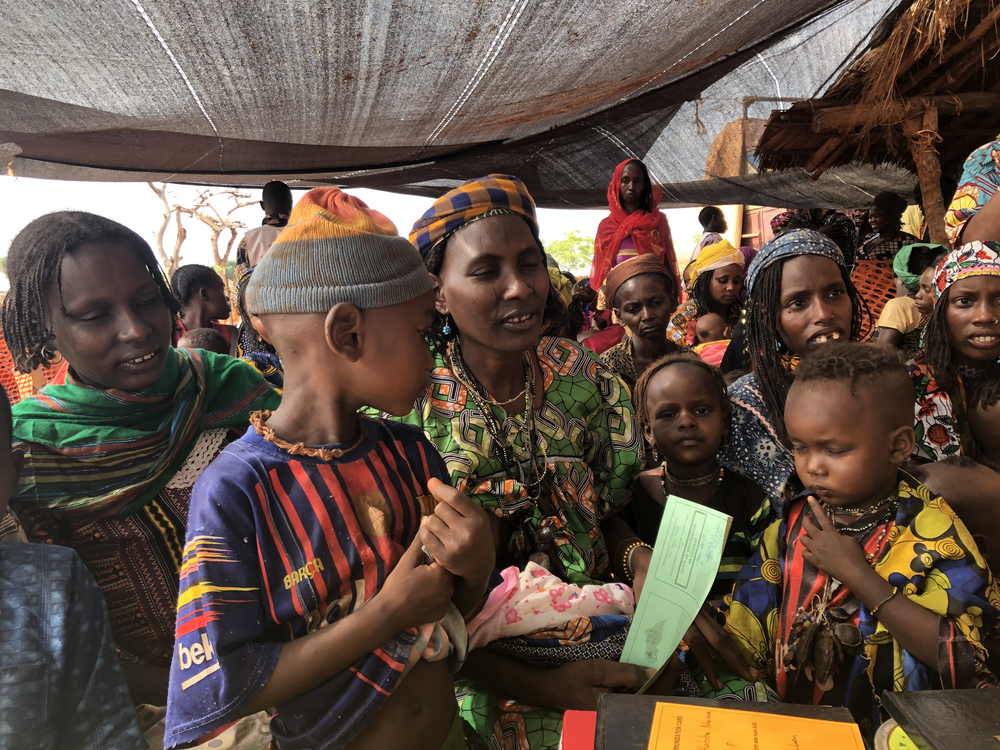 CAR: "We have not seen any doctors in Mingala for more than two years"

After more than two years without humanitarian access to Mingala, MSF has finished a two-day vaccination programme in the town. Located about 100 kilometres from Alindao, the area is difficult to access due to insecurity caused by the conflict in the Central African Republic (CAR), in addition to bad road conditions.

A large crowd gathers around the MSF vehicles. Women and children line up, waiting patiently. A few metres away, the elders sit under a mango tree in the shade. They await the start of consultations. The sub-prefect, the only local authority still present in the area, draws the attention of the audience and speaks. “This is a great day for us, a day of celebration. In more than two years we have not seen a doctor or a humanitarian worker in Mingala”. Applause.

The conflict experienced in the prefecture of Lower Kotto, one of the most populated in the country, has caused this south-eastern part of the Central African Republic to become even more isolated. Armed groups still maintain checkpoints on the roads, which have become more difficult to pass. "We travelled through ghost towns which have been burned down and whose populations were living in the jungle for fear of being attacked," recalls the coordinator of the MSF project in Lower Kotto, Talaré Diabri. At the entrance to Mingala, adults welcome the team. A few children run away in fear because they have not seen a vehicle in years.

MSF medical teams were able to vaccinate 956 children and 760 women of childbearing age over the two days and distribute more than 1610 mosquito nets to fight malaria.

Since 2013, successive peaks of violence in CAR have undermined a health system that was already very precarious, and have deprived the population of access to the most basic health care. Many children and pregnant women have not been vaccinated regularly.

For this first phase of vaccination in Mingala, MSF has administered vaccines against polio, measles, pneumococcus - which causes many respiratory infections - and yellow fever. Teams also administered the 5-in-1 vaccine that simultaneously protects against diphtheria, tetanus, whooping cough, hepatitis B and Haemophilus influenzae type b (which can cause meningitis, amongst other things).

At the same time that the nurses are vaccinating the children, a few meters away a midwife consults pregnant women and another nurse treats patients with fever and carries out tests for malaria. “Several ill people have approached us, because they thought that we could attend to everybody. We try to stabilise the most urgent cases", explains the coordinator. Although some Ministry of Health staff remain in Mingala, the only health centre in the town was destroyed and looted in an attack on the population. Without medical supplies or equipment, this health centre remains a shadow of its former self. "During malaria season and after an episode of haemorrhagic diarrhoea, I saw more than 10 deaths in children under five years old per week," says the head nurse of the health centre.

At the end of 2018, MSF launched a six-month emergency response to meet the medical needs of the population of the Alindao and Mingala health district, but it has only been until recently that the teams have managed to reach the latter population. "I hope that other humanitarian organisations will also be able reach this area of the country, which has been totally deprived of health and other basic services," concludes Omar Ahmed Abenza, MSF Head of Mission in CAR.