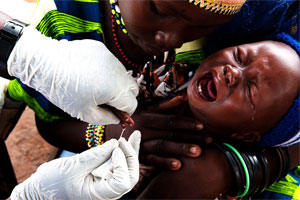 The report draws on four mortality studies conducted by MSF in the past 18 months, which reveal mortality rates in some regions at three times the emergency threshold.

The areas with the highest mortality rates are not affected by violent conflict and do not host large numbers of displaced people.

Mortality rates at this level constitute a humanitarian crisis,* and indicate that the situation is out of control.

In the report, MSF concludes that existing levels of medical assistance are nowhere near enough to meet the scale of the needs.

The report outlines the necessity for increased efforts to conduct larger medical operations that reach more of the population.

"The country’s health system has been torn apart by years of political and military instability, major organisational problems, and a lack of security in the northern and eastern regions, all of which have had a catastrophic effect on the health of the population,” says Olivier Aubry, MSF’s head of mission in the Central African Republic.

The country has the second lowest life expectancy in the world, at 48 years, and the fifth highest death rate from infectious and parasitic diseases.

So far the catastrophe has gone unnoticed by the outside world, despite its severity.

Aubry says: “Last July, in Carnot, the mortality rate for children under five was three times as high as that seen amongst under-fives in Dadaab refugee camp, in Kenya. But, in Carnot, the crisis was unknown.”

Despite the health emergency, the report argues that commitments shown by the government and by the international community are moving in the wrong direction.

The government has been scaling down its investments in health, as have international donors, while humanitarian assistance has failed to reduce the widespread medical crisis.

Both the government and international donors appear to be actually disengaging from health provision in the country.

MSF calls on all parties, including the government and the international community, to expand assistance provided for people’s health in the Central African Republic, and reminds them that if old models of assistance are not working, new ones must be created.

MSF projects support nine hospitals and 36 health centres and health posts. In almost all cases, MSF works in Ministry of Health facilities, seeking as close cooperation as is possible.

* The 'crude mortality rate' is used to define a humanitarian crisis. The emergency threshold is above one death per 10,000 people per day. (World Health Organization)