Central African Republic: Responding to emergencies amid the conflict

Since late December, the situation in Central African Republic (CAR) has quickly worsened, as clashes between a coalition of non-state armed groups and government forces supported by foreign troops, which began amid contested elections, have escalated. In response, Médecins Sans Frontières/Doctors Without Borders (MSF) have deployed emergency teams across the country to assist people affected by the violence who live in constant fear of attack by all sides. This is what our teams found in Bossembélé, Grimari and Ippy, three areas hit by the conflict: 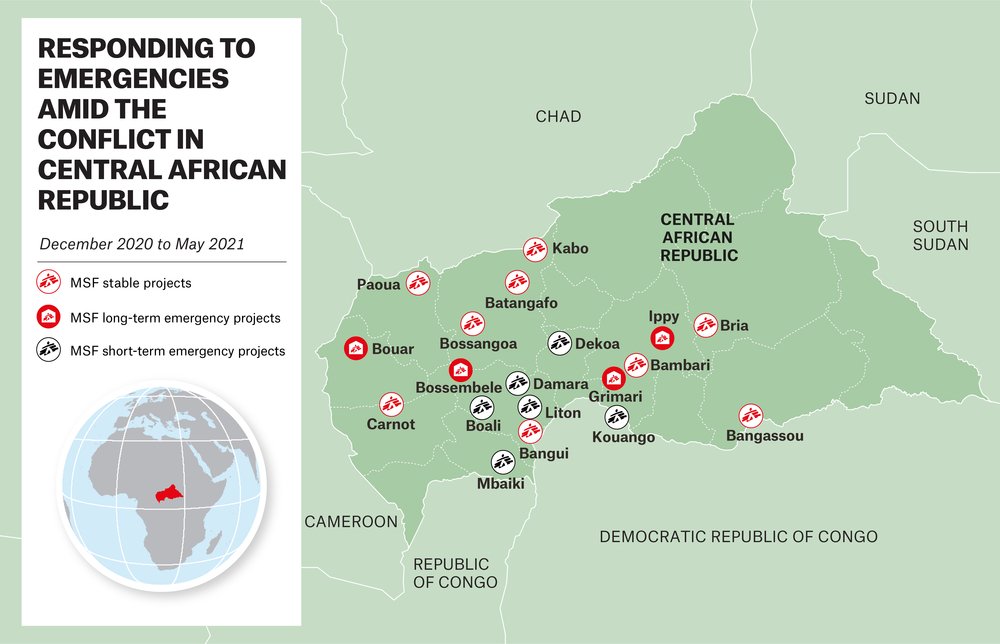 Waves of displaced people, loss of livelihoods and trauma

The upsurge of violence in CAR has uprooted whole communities and forced around 280,000 people to flee their homes since December.

MSF has witnessed and heard reports of civilians intimidated, assaulted, kidnapped and killed, and their villages pillaged and destroyed.

Certain communities, in particular Muslim and Peul groups, have been stigmatised and abused. 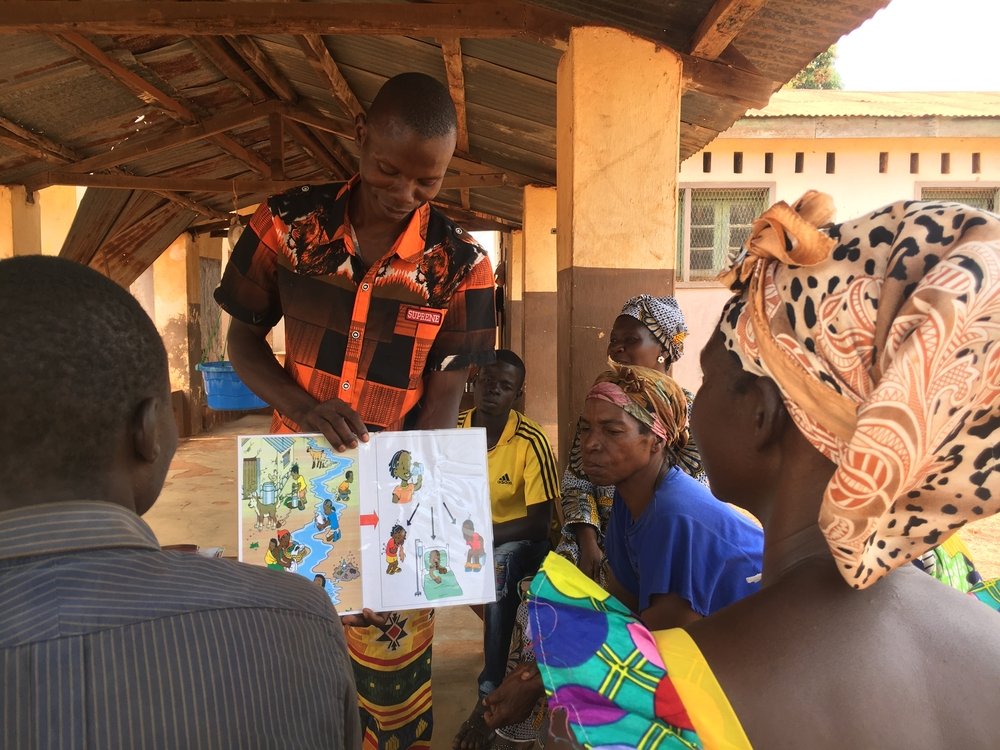 Seigneur Yves Wilikoesse
A displaced person is trained as a community agent. They will support the MSF health promotion team in the Grimari IDP site, in front of the hospital, where 8,000 people have taken refuge.

They are often forced to flee quickly, leaving everything behind. Some stay in make-shift camps or buildings in towns; others hide in the bush.

In Grimari, in central CAR, about 8,000 people sought refuge in front of the local hospital since late-December, while a further 3,000 displaced people arrived from nearby areas in mid-February for some days.

About 1,200 people took refuge near the hospital in Bossembélé, in western CAR, while the rest of its 80,000 inhabitants fled far from the main road crossing the town, and remained in the bush for up to eight weeks.

MSF teams also found 3,600 displaced people sheltering in and around the central town of Ippy.

"We heard rumours of the arrival [of armed men] and fled with our women, children and a few belongings, including crops," says Bruno, from the village of Ngreko, near Grimari.

“They forced us to fight on their side.”

When Bruno was caught hiding in the bush with two other villagers, they were taken hostage, beaten and abused.

For many, the violence has severely impacted their livelihoods.

Cattle have died or been taken by armed actors. Farmers have not been able to work in the fields due to the insecurity or because they have been forced from their villages.

Others have seen their homes burnt or destroyed.

"They said they were not there to hurt us but to take our property. They took everything from us; they destroyed everything we had. They even burnt our fields," says Sylvie, a mother of five boys from Grimari.

Many wounded people and no adequate means to treat them

On 28th December, an attack on a truck transporting civilians in Grimari, killed a number of passengers, including an MSF staff member, and injured several more.

An MSF team evacuated the wounded that were in need of surgery to the MSF-supported hospital in Bambari, 75 kilometres away, as the hospital in Grimari had neither the staff nor supplies to properly treat them.

The fighting continued in the months that followed and has taken a significant toll on civilians. 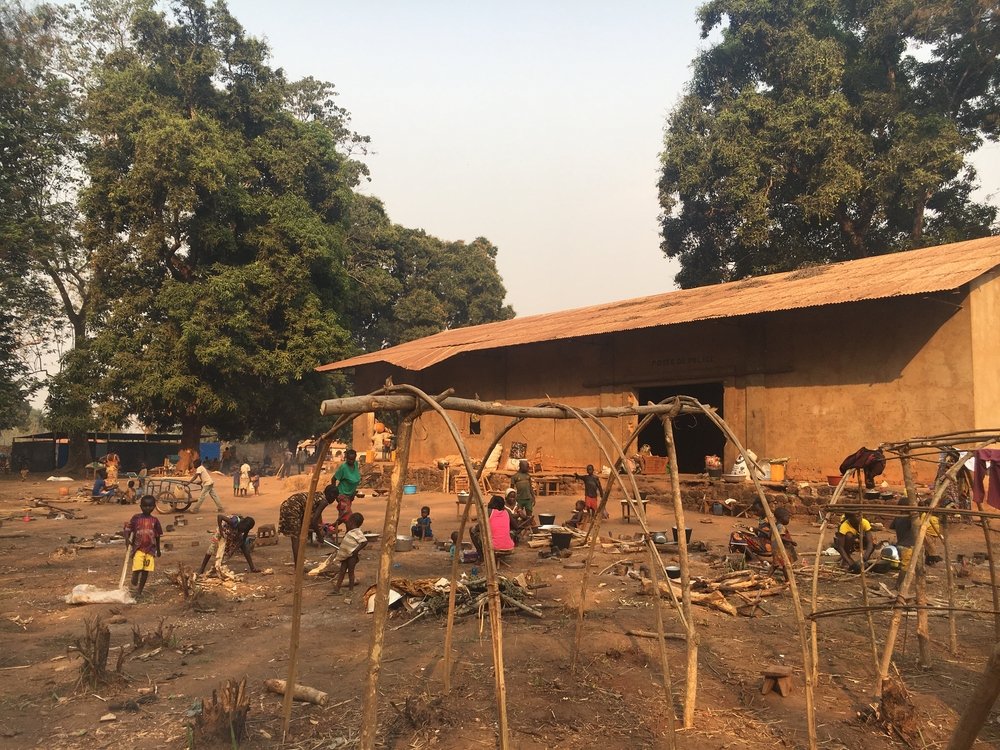 Seigneur Yves Wilikoesse
The IDP site in front of the hospital, next to which MSF emergency team is running its mobile clinic. 8,000 IDPs live here in precarious conditions with very limited access to healthcare.

Twenty-five per cent (30 out of 119) of the people with war wounds treated by MSF in Bambari since the resumption of violence came from Grimari and the surrounding area.

Heavy fighting has taken place in Bossembélé, particularly around Boali where a hydroelectric power plant provides 80 per cent of the electricity used in CAR’s capital, Bangui.

Yet, as in Grimari, people with war-wounds could not be treated in Bossembélé due to a lack of staff and adequate equipment.

Sixty-six patients had to be treated at the MSF-supported hospital in Bossangoa, 147 kilometres north.

In Ippy, the situation was the same. EURECA, the MSF emergency mobile team, treated nine people with war-wounds, including two severe cases. 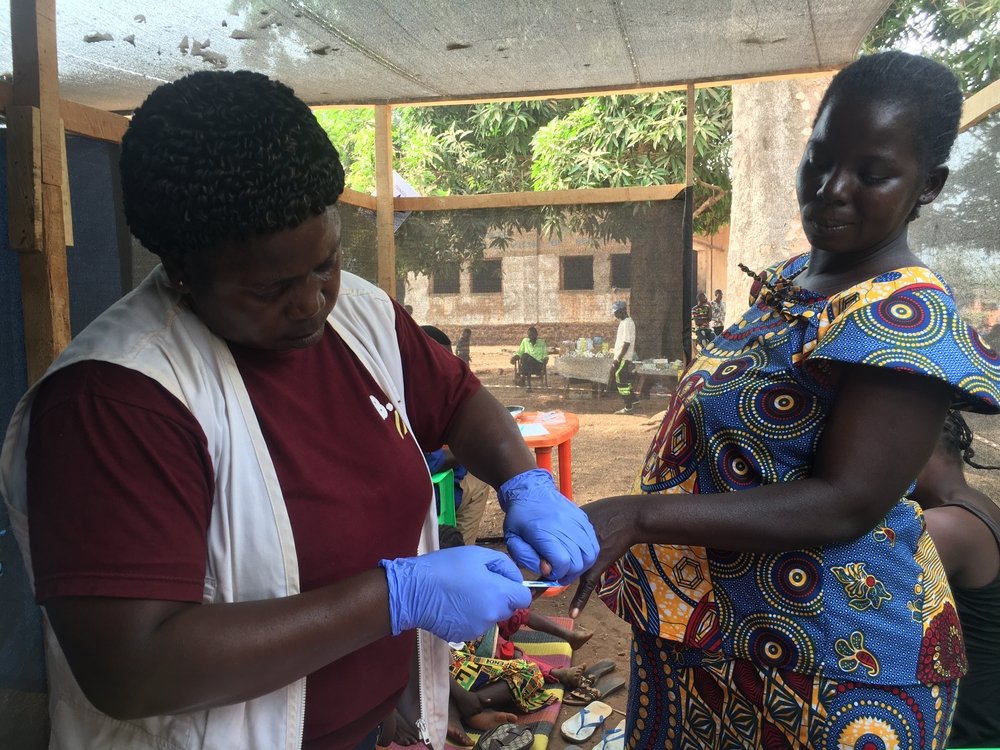 One patient had to be transferred to an MSF-supported hospital in Bria for surgery.

Responding to the persistent violence, MSF reinforced the capacity of hospitals in Grimari, Bossembélé and Ippy by putting in place mass casualty plans, training staff from the Ministry of Health and other NGOs, and donating essential medicines.

This will ensure that the medical teams can respond on their own to new influxes of patients, and respectively stabilise and treat between 20 and 30 war-wounded patients.

The violence in CAR has further damaged a health system that was already in a very precarious state.

Health centres supported by NGOs in the area around Grimari, as well as their bases, were looted after workers were temporarily evacuated at the peak of the fighting.

The conflict, as well as acts of direct violence against medical services, have severely disrupted the supply of medical resources. 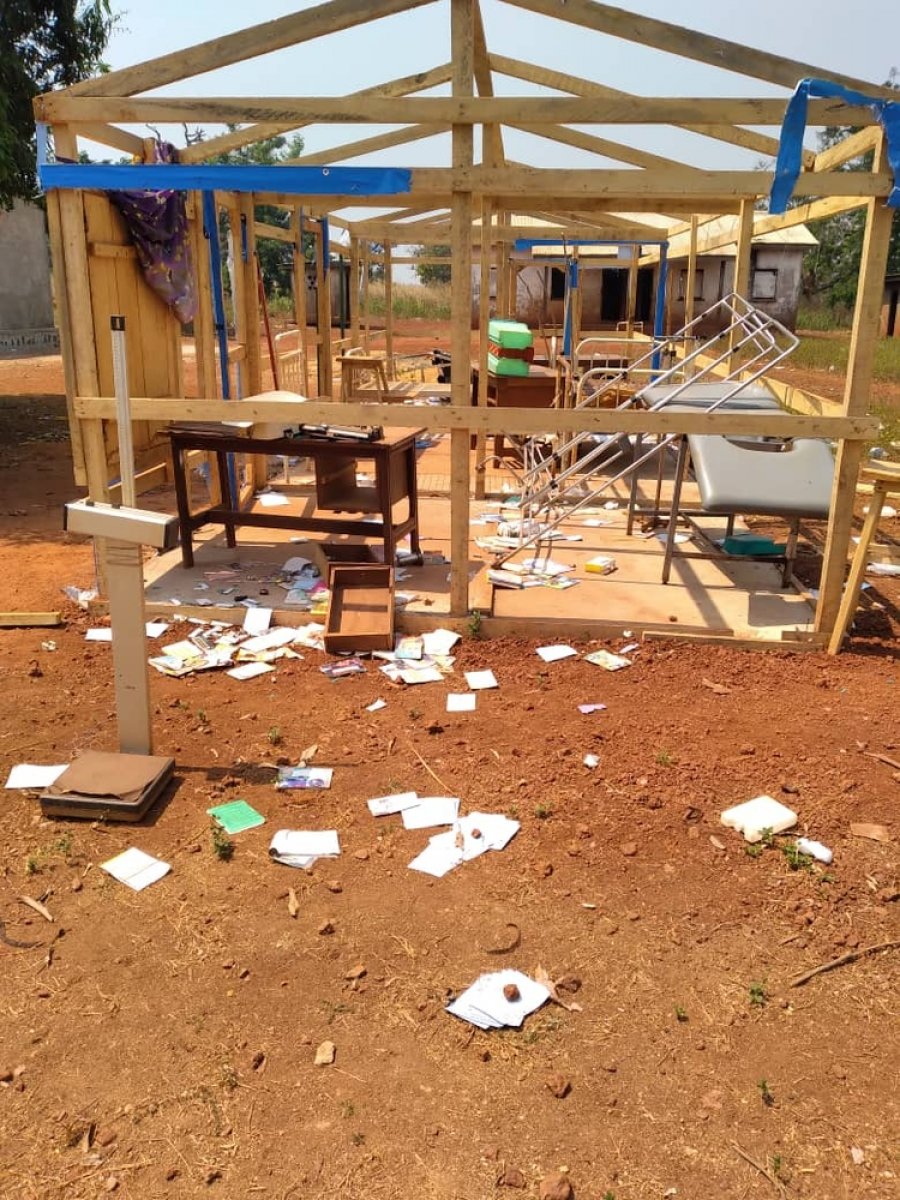 Renate Sinke
The MSF emergency team found this health centre, which had been looted and destroyed, during an exploration in the town of Bossembélé and the surrounding villages. Following this exploration, mobile clinics were set up where needs were most acute.

As a result, most of the health centres near Ippy have run out of essential medicines, including those needed to treat the main causes of death in CAR, such as malaria.

In Kouchou, a village near Ippy, MSF staff found the health centre completely pillaged and destroyed.

The same happened in Bossembélé, where many healthcare facilities were looted, often more than once and by all sides in the conflict. 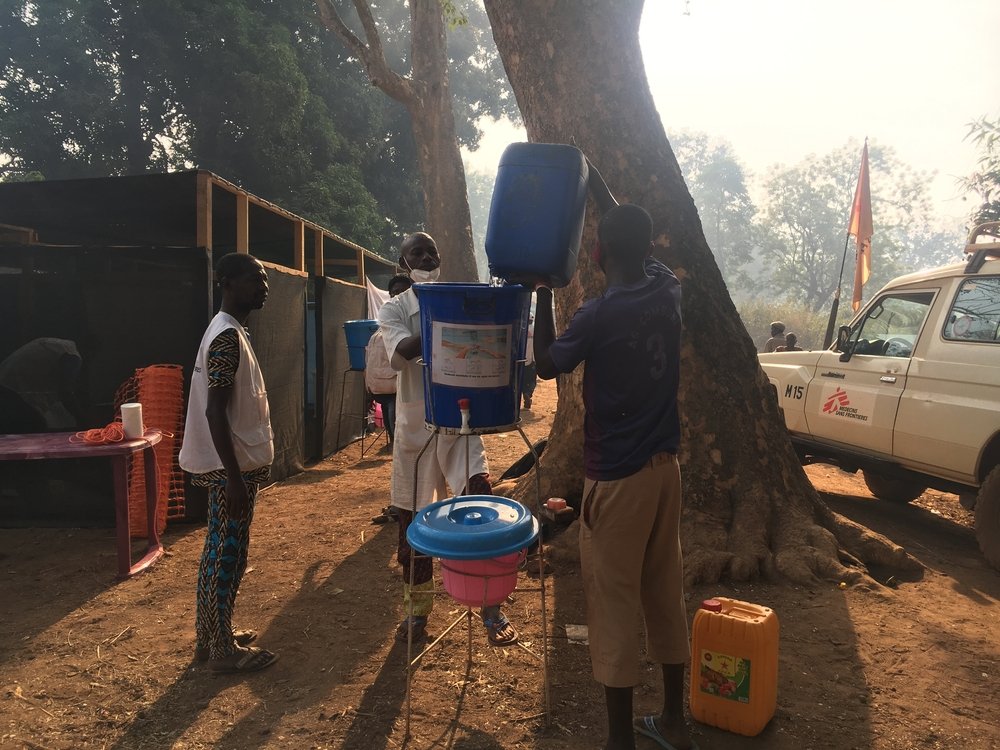 Seigneur Yves Wilikoesse
The MSF emergency team fills buckets with water for patients to wash their hands before their consultation. The mobile clinic has been set up in front of the hospital, next to a site for displaced persons who fled post-election violence in CAR.

Staff at healthcare centres throughout the region will now have to start again from scratch, as medicines, medical materials, furniture, solar panels and fridges have been either taken or damaged.

“We found the walls and roofs damaged by bullet holes, and blood stains on the walls,” said Renate Sinke, MSF emergency coordinator, about Boyali, a small village near Bossembélé.

“All parties to the conflict must respect and protect medical facilities at all times.”

In Ippy and surrounding villages, the EURECA team ran mobile clinics from early-February to early-April and has planned to conduct follow-up visits to monitor the situation and reach further villages from there.

MSF teams carried out 5,307 consultations between December and April, focusing on children under five, pregnant women and emergency cases. 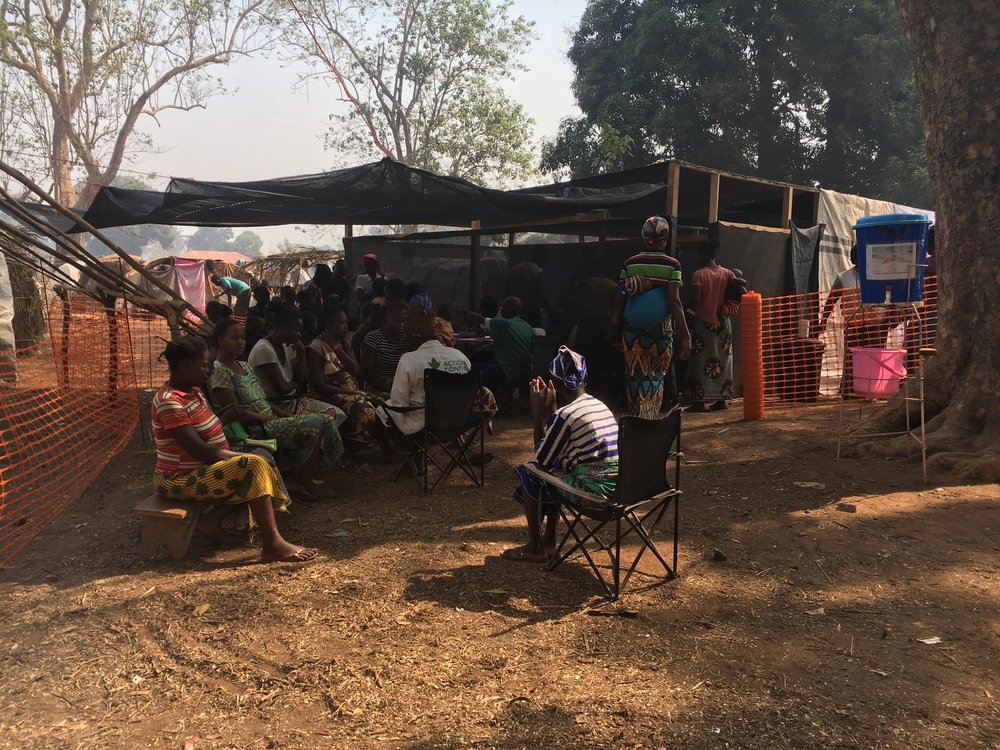 Many of the people MSF met were in dire need of medical assistance.

In Grimari and Bossembélé, more than half of the patients our teams treated had malaria (59 per cent), one of CAR’s biggest killers and main reason for consultations across the country

Other patients had parasitosis, diarrhoeal diseases and respiratory tract infections.

"I have been sick since we fled to the bush. I feel cold all the time and I have pain all through my body. I vomit constantly and have diarrhoea. The plants, the traditional medicines, helped me during the two or three weeks we spent in the bush,” said Thérèse, a displaced woman now in Grimari who unfortunately was not part of the 2,197 children, pregnant women and emergency cases to receive treatment through the MSF mobile clinic.

“When I arrived here, my condition grew worse. I can't go to the hospital because I don’t have any money. We lost everything.” 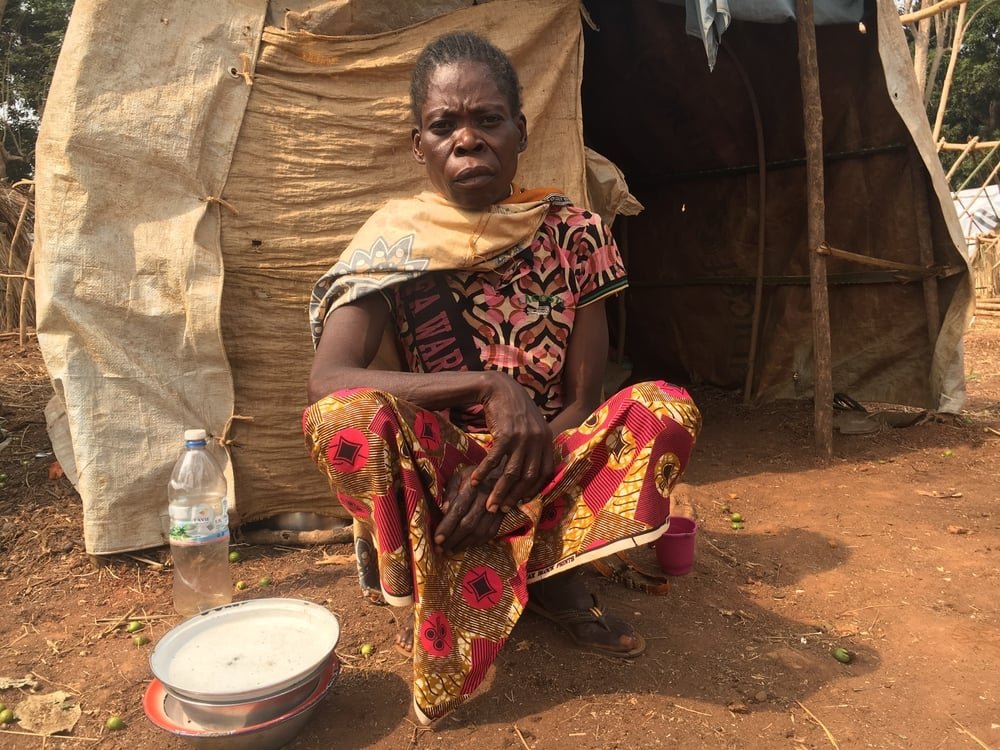 Seigneur Yves Wilikoesse
Thérèse, a displaced woman now living in Grimari: "I have been sick since we fled to the bush. I feel cold all the time; I have pain all through my body. I vomit constantly and have diarrhoea."

Establishing safe water and sanitation systems was an important part of the response.

MSF teams installed latrines and showers in the Grimari and Bossembélé hospital compounds where people took refuge and made drinking water available.

In Ippy and surrounding villages, water and sanitation activities were also conducted in the seven health centres visited and assessed by the EURECA team.

Saidou Ibrahim, a young boy aged 10 from Ippy, had fallen as a child while playing with his friends. It was a simple injury that had become seriously infected over the years.

The pain prevented him from walking and talking.

At first, his relatives were helping to pay for hospital treatment but then had to stop because they could not afford it, even though the hospital was just one kilometre from his home.

The family then resorted to traditional medicine for almost four years, but this did not help. 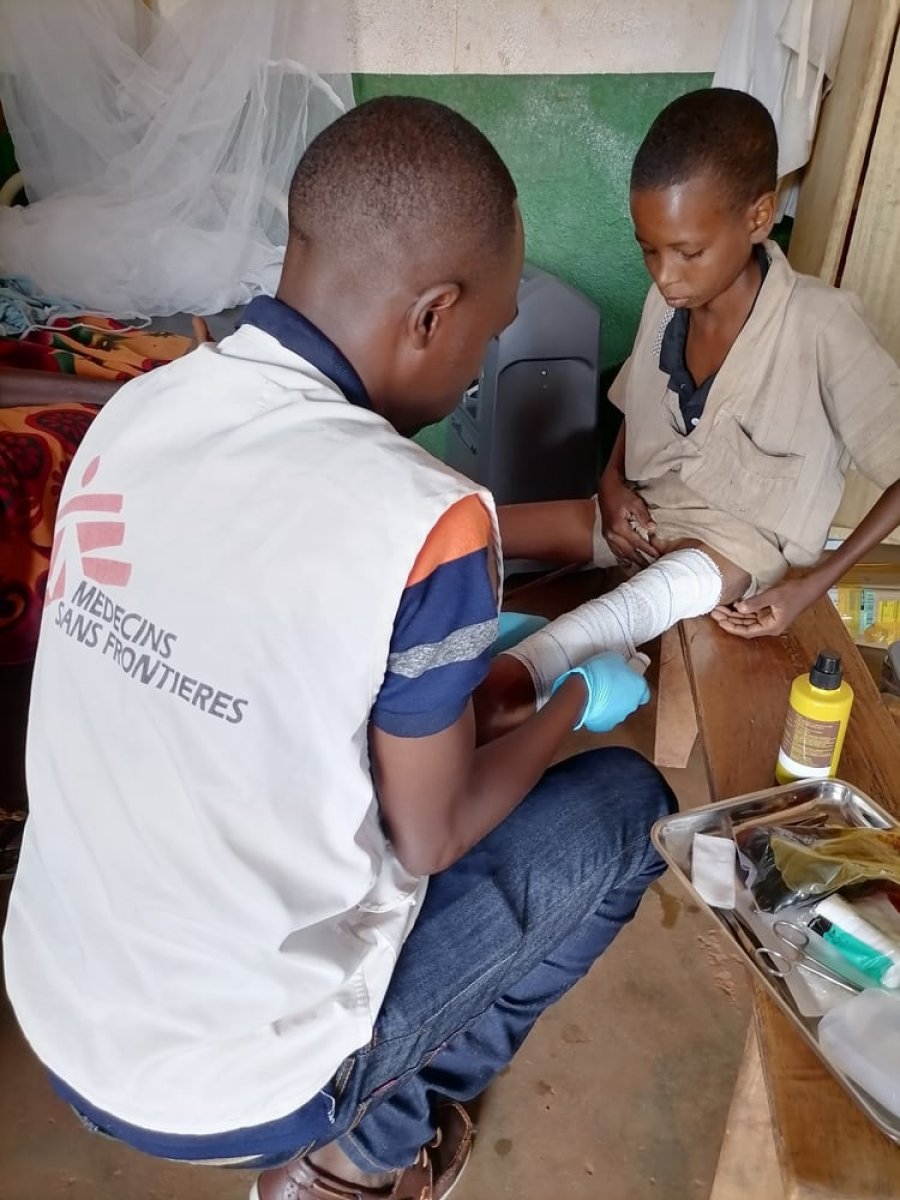 Narin Fandoglu
When he was 10 years old, Saidou Ibrahim, from Ippy, fell while playing with his friends. It was a simple injury at first, but it became severely infected in the years that followed. The pain prevented him from walking and talking.

When the MSF emergency team met Saidou at a camp for displaced people, he was in a very bad condition.

They referred him to the hospital where his dressing was changed every three days for more than two weeks.

Without this treatment, he would have lost his leg. He is now slowly recovering.

Beyond the health needs, often no other humanitarian organisations were present in the areas hit by the violence.

As a result, many displaced people lacked protection, food, adequate shelter as well as clean water and safe sanitation.

Sexual violence on the rise, including mass rapes

As it often happens during conflict, sexual violence has become widespread throughout the region.

“Women are particularly vulnerable and have found themselves caught in mass rapes perpetrated by armed actors,” says Narin Fandoglu, the coordinator of the emergency response team EURECA.

In and around Ippy, MSF provided medical and psychological care to 29 survivors of sexual violence. 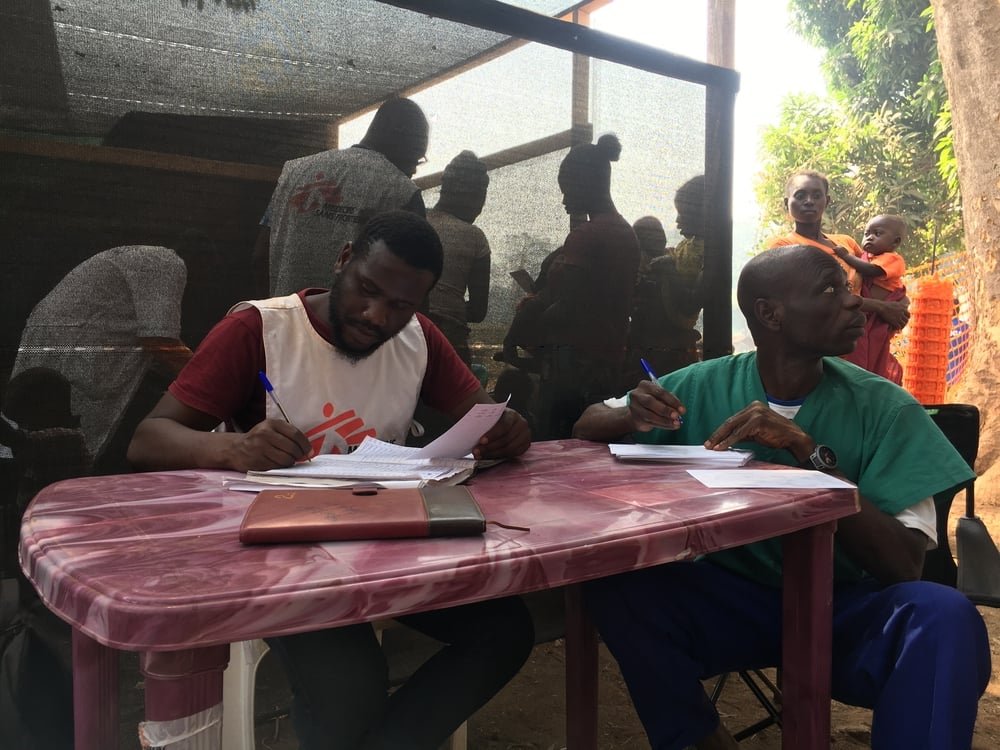 Seigneur Yves Wilikoesse
The MSF emergency team in Grimari is preparing its mobile clinic before patients arrive. This mobile clinic is located in front of the hospital, next to a site for internally displaced persons who fled post-electoral violence in CAR.

This included 21 women who were raped as part of two mass rapes, which took place at the same location and only two weeks apart.

In Grimari and Bossembélé, MSF treated 16 survivors of sexual violence. We also trained hospital staff to respond to patients who have suffered sexual violence and donated drugs and materials to support this.

Less than half of the survivors of sexual violence seen by MSF staff arrived within 72 hours after the event.

This is concerning, as receiving medical care in the first three days after a sexual assault greatly reduces the risk of unwanted pregnancies and the transmission of diseases, including HIV.

"This is just the tip of the iceberg," says Narin.

Many women do not come to us because they are afraid of reprisals, either from their perpetrators or from their own community

Narin Fandoglu, the coordinator of the emergency response team EURECA

“The legal procedure is also a lengthy process that is not accessible from the provinces. This discourages people.”

In Grimari, MSF has organised group discussions to raise awareness on this issue and reduce stigma among communities.