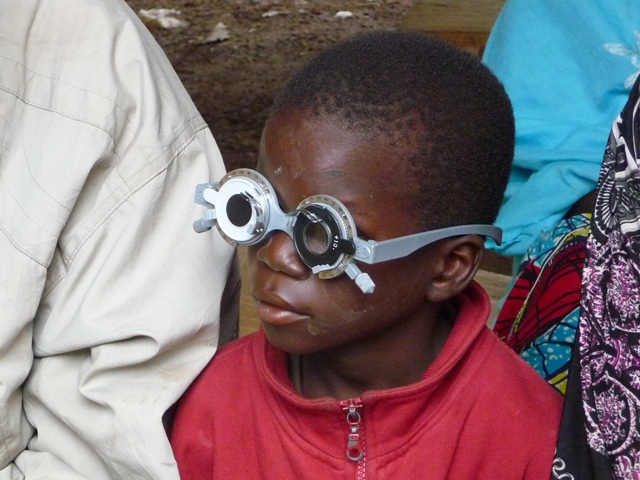 The treatment was provided completely free of charge to the patients, and over a two-week period, 53 people had their sight restored through surgery.

“There hadn’t been anything like this in Boguila in recent years,” explains Project Coordinator, Jane-Ann McKenna.   “There are only five ophthalmologists in the whole country, and they are based in the capital, over 400 kilometres away.  We spoke to the community, the mayor, religious leaders, and put an announcement on the local radio station.  People were excited and really appreciated that MSF was addressing eye health problems.”

One patient at the camp was 64-year old Pierre Mberna “I heard the information on the community radio of Paoua.  The radio announced that doctors would come here to Boguila to operate on people who suffered with cataracts. ..It has been nine years that I’ve suffered with this illness.”

Pre-screening of patients in advance of the camp was carried out by MSF’s Nurse Supervisor, and a register of potential candidates for surgery was drawn up. In mid-June the four-person CBM team arrived in Boguila, led by ophthalmologist, Dr. Yacoub.

McKenna continues, “When Dr. Yacoub arrived, the word spread really quickly.  More than 200 people turned up for consultations.  Some of these were patients we had already screened and had advised to come back to meet with the surgeon.  But many people just came when word spread that the surgeon had arrived.”

The CBM team worked late into the evenings to ensure that everyone who had turned up was seen.  “They were very committed.  At one point, Dr. Yacoub was doing consultations by candlelight,” says McKenna.  In total 53 people, mostly suffering from cataracts, were deemed suitable for surgery.  Other patients identified as suffering optic nerve atrophy and retinal problems received medication.

The logistical set up of the camp required further cooperation. “We made the operating theatre solely available for eye surgeries for the two-week period,” McKenna explains.  “That meant we had to convert our emergency room into the hospital’s operating theatre and move around some other services.  But luckily we have a lot of space so it was manageable.”

The surgical patients were hospitalised for three days, and MSF provided accommodation on-site “In our compound we have a whole area sectioned off specifically for medical camps.  This area has water points, toilets, and washing areas.  So we set up two tents there with about 25 beds where the patients and their caretakers could stay.”

50-year old, Abdoulaye Astha underwent the surgery “Before, I could not move because I had my eyes closed.  It was impossible even to go to the market.   Now I see well.  God is good.”   “I have headaches but I am well,” declares 40-year old Josephine after her operation, “I don’t fall in holes anymore.”

One of the youngest patients to be operated on was 10 year-old Merci Feikouti.  His father brought him to the camp “He had this illness at the age of four months...a whitish liquid was coming out of his eye.  Most often he could not see.  He had to open and close his eyes, and only one eye was in a good state.”

Dr. Yacoub describes Merci’s operation “This case really touched me.  This little child had almost lost his sight completely.  After the surgery he is now able to tell the difference between a black person and a white person!  He is not only healed, but now he can go to school and contribute to the development of the country.  I’m really pleased with the outcome.”

Plans already underway for next year

With the first camp successfully completed, plans are underway to host another camp next year as reports from the patients indicate that there are many people in their home villages suffering from eye problems.  “The community were very happy that we ran this camp,” says McKenna.   “The impact of this surgery on peoples’ lives is huge.”

"I see even further than before,” reports Pierre Mberna after his surgery, “I say thank you to the doctor who saved us.  Thank you very much.”