Central America: The effects of state policies on people who flee their homes 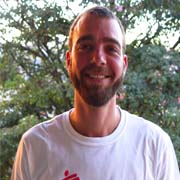 Samuel Almeida is Médecins Sans Frontières/Doctors Without Borders (MSF) Advocacy Manager for the MSF Regional Mission in Mexico and Central America. MSF provides services in the cities of Reynosa and Matamoros on the Mexican border with the US, and in the cities of Tegucigalpa and Choloma in Honduras.

There has been a lot of attention in recent months on migration to the USA from Central America. Whilst many people will have seen recent US government measures aimed at reducing migration through its southern border, the humanitarian crisis that has affected the Central American region for decades continues to be neglected.

Médecins Sans Frontières/Doctors Without Borders (MSF) provides comprehensive health care in both Mexico and Honduras, including medical care, mental health services, social work, and health promotion; aiming to reduce the gaps in the existing public healthcare coverage. In the Honduran capital, Tegucigalpa, our work is mostly related to victims of violence, with a focus on sexual violence. In the city of Choloma our project works with sexual and reproductive care, running a maternity centre in collaboration with the Minister of Health. Recently, we also began an intervention to respond to the current dengue epidemic affecting the northern area of the country.

In the coming months, we will be starting a project in Guatemala. Over the past 20 years, there has been an increase in chronic kidney disease in agricultural communities, which are not associated with the traditional factors. This disease has become an important public health problem and is observed in several countries in Central America and Asia. During our exploratory mission, a few potential causes have been identified, such as the use of harmful pesticides in the plantations, and extreme working conditions which do not allow workers to have appropriate rest and hydration.

As for Northern Mexico, we provide care to the local population who have been victims of violence, focusing on mental health services. Finally, in both Mexico and Honduras we provide care for returnee migrants deported from the US, and to some refugees, migrants and asylum seekers on their way to the US.

Our patients face many challenges on their route to the US. This population is particularly targeted by criminal organised groups and face kidnappings, sexual violence, and physical and psychological violence. On top of that, we also hear reports of the poor conditions they are subjected to in the US prior to deportation. Often, they are kept in very cold rooms for weeks, with limited access to medical care, quality food, clothes or blankets. Additionally, some of them are transferred to federal prisons, where they are kept with convicted felons when their only alleged “crime” was to cross a border. We hear reports of people witnessing, or being subject to, violence by other inmates in these facilities. Finally, when Hondurans are deported back to their country they are handcuffed throughout the flight. All of these experiences have a negative impact on their physical and psychological wellbeing; during an already traumatising process.

As a medical humanitarian organisation, not only should MSF provide medical care services but we must also draw attention to the plight of the populations we serve. Often MSF works in neglected contexts and working closely with the communities we serve comes with the added responsibility to try to contribute to changing the situation. We want to leave the countries we work in in a better situation than when we first came in. By advocating against harmful policies MSF tries to alleviate the suffering of people and contribute to positive change.

For example, current US policies put migrants, asylum seekers, refugees, and returnees at great risk. MSF has systematically called for an end to so-called zero tolerance policies against migrants. For instance, the US government’s decision not to recognise gang violence and domestic violence as legitimate grounds for asylum is not only against international law but is also immoral. MSF welcomes the recent suspension of that decision by a US court in December, and we hope that other harmful policies will also change. Many people leave their countries because they fear for their lives, and simply have no other option. By denying access, or indeed deporting them back to their place of origin, the US administration shows very little regard for the grave dangers they face. It is similarly dangerous to force asylum seekers to wait in Mexico as their asylum claims are processed in the US, where they are in a particularly vulnerable situation and are often targeted by organised criminal groups.

Equally, on several occasions we have drawn the attention of the US authorities to the risks returnees face when deported to Reynosa at night. Reynosa is one of the most dangerous cities in Mexico, and returnees arrive late at night. The US could easily deport them in the morning and avoid subjecting them to additional, avoidable risks.

Recently the US administration has been misusing MSF data to justify building a wall, which is completely contrary to what we believe. What we witness here is a humanitarian crisis, and it’s happening because governments have been unable to respond properly to migration. Reforming the policies that put people at risk is the only humane thing to do.