In the Mexican border city of Reynosa, people seeking safety in the US are trapped in a violent conflict

On the banks of the Rio Grande, in the Mexican state of Tamaulipas, lies the border city of Reynosa. Home to more than 600,000 people, Reynosa is a common way station for many Central American migrants hoping to gain entry to the US.

It’s also one of the most violent cities in Mexico, convulsed by conflict between criminal cartels vying for territory.

The presence of Mexican military police in the streets does little to ease the tension, which takes a heavy psychological toll on both permanent residents and migrants passing through.

“If you scratch the surface a bit, everyone here in the city has been a victim of violence, either directly or indirectly,” says MSF psychologist Violeta Elizabeth Perez Quintero.

Here, MSF teams provide medical and psychological care, along with social services, to both local and migrant communities.

"We were told by the criminal groups that we had to pay the ‘war tax.’ We couldn’t afford to pay anymore – we only sold bread. My son, Josue, was threatened. We were told that if we couldn’t pay we would be killed."

It’s nearing 37 degrees Celsius under a cloudless mid-July sky when the MSF mobile clinic team arrives at the Senda de Vida migrant shelter on the bank of the Rio Grande. Founded in 2000, this Christian shelter has grown from a single house to a modest compound, and more housing is under construction.

With little national funding available to aid people on the move, and an international response commensurate with the scale of the displacement crisis absent in Central America, Christian groups and small, local charities have stepped in to fill the wide gaps in services.

MSF teams have been providing mental, social, and physical health consultations to the migrants sheltering here for around a year and a half. 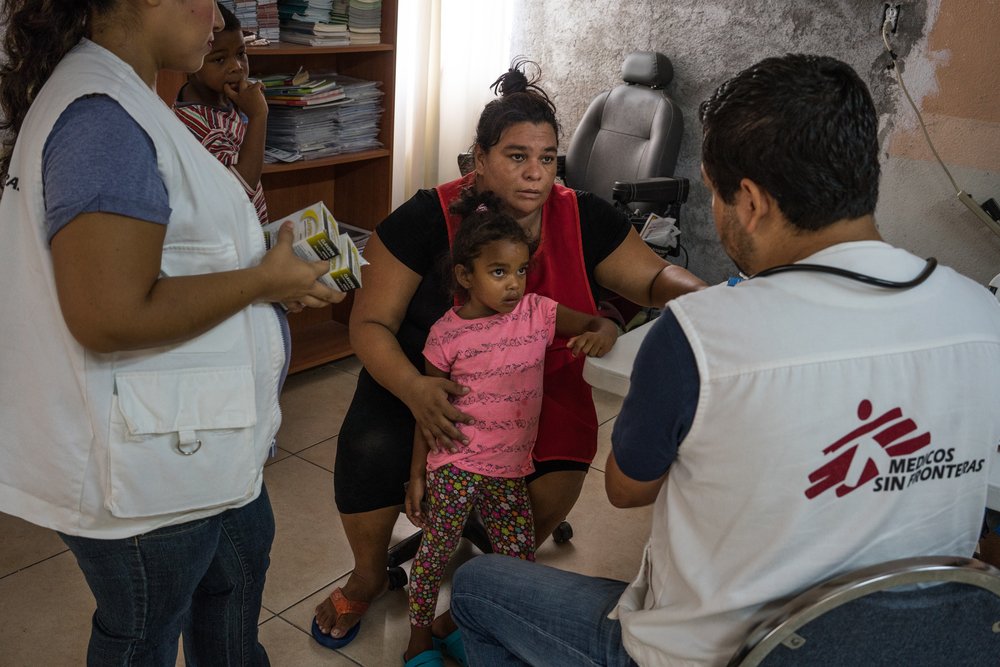 Dominic Bracco
Honduran migrant Piedad holds her daughter during a consultation with an MSF team in Reynosa, Mexico.

Thirty-two-year-old Piedad waits in the blistering heat in the complex’s concrete courtyard with her three-year-old daughter, Dayli. The girl has been suffering from an ear infection, so Piedad has brought her to see one of the MSF doctors.

Her three sons – 15-year-old Josue, eight-year-old Eddy, and seven-year-old Jairo – kick a soccer ball back and forth in the shade of one of the shelter buildings.

“I used to run a bakery in Triunfo de la Cruz, Honduras,” says Piedad. “But we were told by the maras [criminal groups known for drug and human trafficking] that we had to pay the ‘war tax.’ We couldn’t afford to pay anymore – we only sold bread. My son, Josue, was threatened. We were told that if we couldn’t pay we would be killed.”

There’s no avoiding violence in Honduras, even at home. The streets of major cities like Tegucigalpa and San Pedro Sula are gripped by crime and conflict.

Domestic and sexual violence are also widespread, with women and children bearing the brunt. Corruption, fear of retribution, and limited access to essential health services often leave victims with no protection and few choices but to leave home. 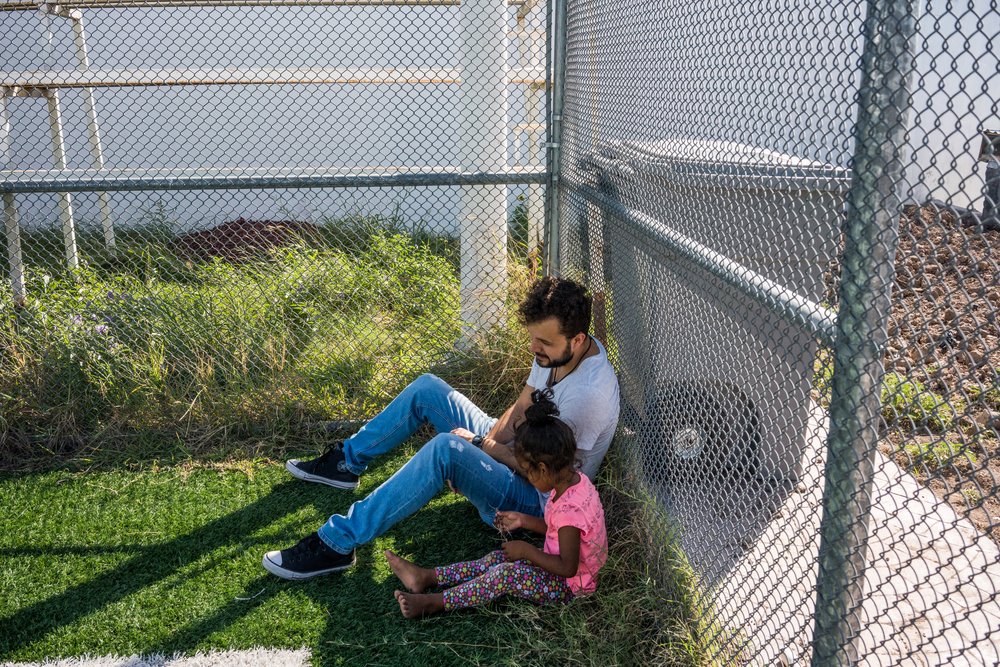 On 15 April, 2018, Piedad, her husband, and their children did just that. They set off on foot for the Guatemalan border in hopes of reaching safety in the US.

Eventually they caught a bus to Tenosique, Mexico, where they were assaulted and robbed of their identification documents. They arrived at a migrant shelter known as ‘La 72’.

“We saw MSF in the migrant shelter in Tenosique,” says Piedad. “They gave us counselling and medicine for my children, and medical care and advice.”

“I think the United States needs to listen to what people are going through... Narcotrafficking, kidnapping, gangs – people are dying in Honduras.”

From there they continued on the path north, walking and catching buses where they could. “In some cities we had to beg for money to buy bus tickets or food,” she says. “We slept in the hills or on the outskirts of towns. There were days when we didn’t eat or drink any water.”

They stopped in Coatzacoalcos, where they again received care from an MSF team. Finally, they reached Reynosa, where they sought out Senda de Vida, which they had learned about on their journey.

They had also heard that they might have better luck crossing the border if they travelled separately, with Piedad accompanying her sons and her husband accompanying Dayli.

So Piedad set off with the boys, heading for the bridge over the river while her husband and daughter remained at Senda de Vida. “It was a terrible experience,” she remembers. “We first met with US immigration and asked for refugee status. But we were denied, and they told us to wait. We stood in the sun for four hours. Finally, Mexican immigration agents came and asked if they could take us. The Americans said yes.”

“We can’t be here forever”

Without the papers that had been stolen in Tenosique, Piedad could not prove who she was or where she’d come from.

She and her two younger sons were brought back to Reynosa and held in a jail cell. Josue, her eldest son, was held separately in a detention centre for minors.

She had no idea where he had been taken, or what had become of him, for seven days. Finally, on the eighth day, Mexican immigration officials reviewed Piedad’s one remaining document, a paper from the consulate that proved the family had planned to apply for a humanitarian visa in Mexico.

She was released and reunited with her family at Senda de Vida. They have now been living at the shelter for two months, essentially stuck in limbo. Returning to Honduras is impossible, but the prospects of making it to the US grow dimmer by the day.

“I know we can’t be here forever,” Piedad says. “I’m the cook here now. And my husband has day jobs, but he only makes 150 pesos a day [about 6,5€]. That’s nothing. We can’t find a place to live, we can’t send our kids to school. I just want a better future for them.” 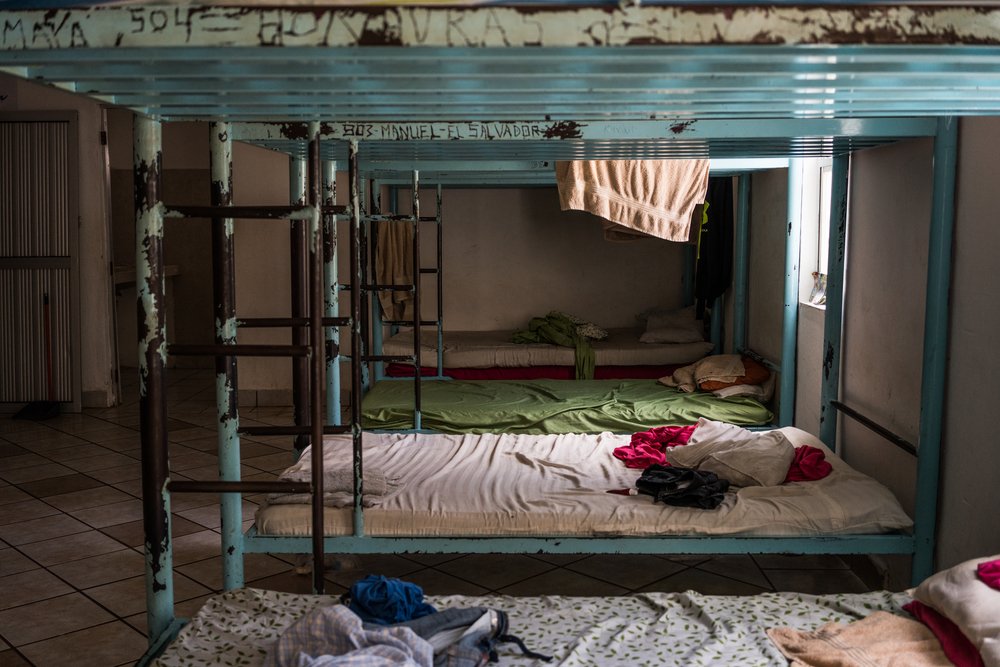 Dominic Bracco
Graffiti carved into bunk beds by children from El Salvador and Honduras at a facility in Reynosa, where child migrants caught by Mexican immigration officials are held until deportation.

The family has been working with a legal counsellor here at the shelter, but there aren’t many options available for people in their position.

A Mexican humanitarian visa would allow them to stay in the country but would complicate finding work there.

“Right now I don’t know what we’ll do next,” she says, shaking her head. “But my idea is still to cross to the US.” On the opposite end of the compound, another family sits on the concrete steps of Senda de Vida’s administrative building, where MSF has installed a small clinic the mobile team uses for consultations.

“The United States needs to listen”

They too find themselves trapped here in Reynosa after being denied asylum at the US border. “I was kidnapped in Honduras,” says Carlos. “Thank God, I escaped, but they wanted to kidnap my daughters and wife as well.”

He says they did not even need to think about the decision to leave: “We were in danger.” They were aware there could be further risks along the way. 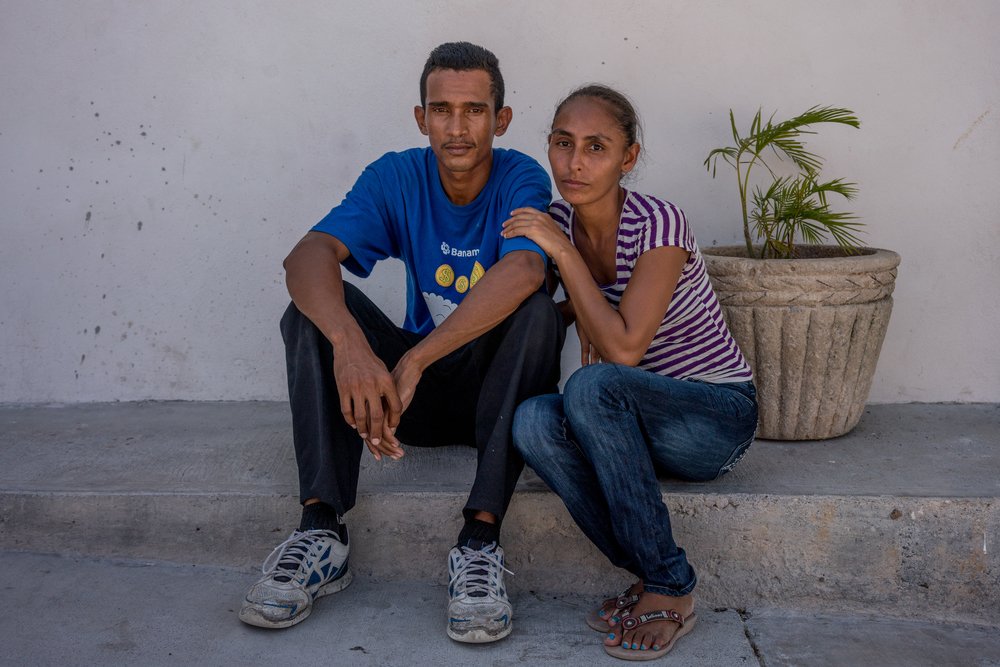 Dominic Bracco
Carlos and Ruth fled Honduras with their children after Carlos was kidnapped and escaped.

“We came to Mexico by bus,” says Carlos. “We went through Guatemala, but it’s difficult to go through there, too. Getting into Mexico is even worse. There are kidnappings, rapes . . .”

“We’ve suffered so much in Mexico,” says Ruth, stroking her daughter’s hair. “We stayed in the bus station, sleeping with our kids. There were times when we didn’t have anything to eat.”

Ruth and Carlos don’t know where they will go from here, but they know it won’t be back to their home country, where the rest of their extended family still lives.

“We can’t live in Honduras,” Carlos says flatly. “I’d like us to have a home of our own, but it was necessary to leave there. They threatened my children.”

The family has a temporary permit to stay in Mexico and can be referred to legal aid through MSF’s psychosocial care programme.

But their future here, stuck between a home they can’t return to and a haven closed off to them, remains desperate.

“I think the United States needs to listen to what people are going through,” says Carlos. “Narcotrafficking, kidnapping, gangs – people are dying in Honduras.”

He knows that some people may be crossing the border to find work or, as he says, “just to check it out.”

But for Carlos and his family, the painful decision to leave was forced on them. “Only we know how we feel. Only we know what we’ve been through.”

Our work with refugees and displaced people >

Some 500,000 people flee Honduras, Guatemala and El Salvador annually, displaced by threats, extortion, forced gang recruitment, and homicide rates that rival those in countries at war.

Many have no choice but to undertake a hazardous journey north, risking serious injuries and even death along the way, with hopes of reaching safety in the United States. They continue to do so despite the Trump administration’s efforts to step up deportations and dismantle legal protections for refugees and asylum seekers in the US.

The physical and mental health consequences of this unfolding disaster have gone largely unnoticed by the international community. In response, MSF, long active in the region, is scaling up activities to provide medical and psychosocial care, running projects at hospitals and clinics and in migrant shelters along the routes north.

Teams are also working to adapt the services on offer to better serve growing numbers of people on the move.