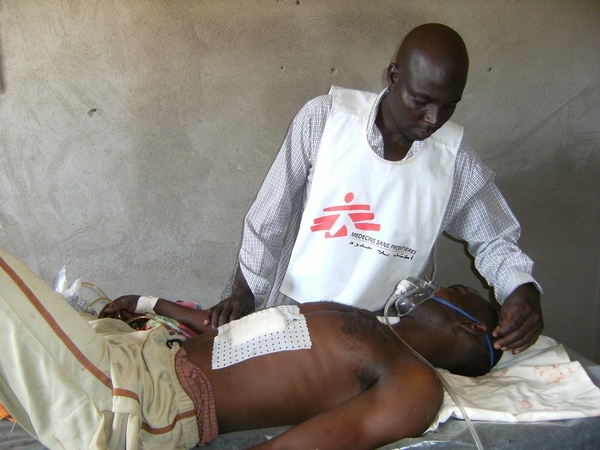 Médecins Sans Frontières is responding to a fresh wave of violence that has broken out in some areas of Sudan’s Darfur region along the border with Chad. In the past week, MSF teams have treated 30 new injured patients, 13 of whom suffered from gunshot wounds, and were evacuated to the nearby town of Abeche for emergency surgery. It is the largest wave of wounded Médecins Sans Frontières has seen in the last two months.

"Some of my family members died; my oldest brother lost two children; my aunt lost one child and in all the confusion, another child disappeared.  To this day we don’t know if the child is alive or dead. " - 25-year old patient at the Médecins Sans Frontières emergency project

In April, Médecins Sans Frontières opened an emergency project in Tissi, in south eastern Chad, to provide medical and humanitarian assistance to Sudanese refugees and Chadian returnees affected by the fighting in Darfur. The humanitarian crisis is a direct result of the deteriorating security situation in some areas of Central Darfur, which has displaced an estimated 50,000 people to Chad since the beginning of the year.

“In the past three months Médecins Sans Frontières has treated more than 80 patients for gunshot wounds.

The level of violence is extremely concerning and our team is frequently working around the clock to stabilize and refer patients with severe injuries,” says Jason Mills, Médecins Sans Frontières Head of Mission in Chad.

Médecins Sans Frontières is running a health facility in the town of Tissi, where, in addition to the wounded, more than 3,500 people have been treated for ailments such as diarrhoea, respiratory tract infections and malnutrition.

Because of the onset of the rainy season, the team is also worried about the approaching malaria season. Médecins Sans Frontières is now holding malaria prevention sessions for local residents, and with the help of a network of community health workers, is monitoring the general health situation for the local population in Tissi town, as well as returnees who have settled in surrounding villages.

Healthcare in the camp

A second Médecins Sans Frontières team is now providing primary health care in the Ab Gadam refugee camp, 20 kilometres west of Tissi, where 17,000 refugees have been relocated by the United Nations High Commission for Refugees.

In early August, Médecins Sans Frontières will open an in-patient department to provide secondary health care in the camp for the next two months.

Due to the rain, poor road conditions have made it difficult for water trucks to reach the Ab Gadam camp, leaving refugees with little or no potable water. In mid-July the situation reached a crisis point when the amount of water available dropped below one litre, per person, per day, well below the humanitarian standard of 20 litres per person, per day.

On July 21, the Médecins Sans Frontières team was able to rehabilitate a dam close to the camp and distribute 200,000 litres in the following three days, raising the quantity of of water to 7 litres, per person, per day by July 23rd.

“Médecins Sans Frontières is expending considerable effort to improve the water supply in the camp, and to build latrines in order to prevent outbreaks of cholera and hepatitis-E,” says Turid Piening, MSF Health Advisor for Chad.

Despite the logistical challenges, Médecins Sans Frontières plans to continue its emergency response in the Tissi area at least until the end of the rainy season in October.