What’s the situation in east Chad, and more specifically in Ouadddaï Region?

Abderahman Ibet: On the socio-economic level, most people in the east of the country live in extreme poverty. Families often live off agriculture, so when there’s not enough rain their living conditions can deteriorate very rapidly. Land is shared between herders, who need it for their cattle, and pastoralists who need it for their fields. But, with less and less arable land, there are fewer crops and that creates tensions. Other economic issues are instrumental in destabilising the region. For example, exporting millet – a staple in east Chad – to the Gulf States is also pushing up food prices.

Regarding Chad’s economy, Abéché is the biggest city in the east. It’s situated on the commercial road connecting the country to Sudan. Everything arriving from Arab countries passes through Sudan, Abéché and from there to Nigeria. We’re seeing a surge in insecurity, as armed robbers and thieves are present in the area. The huge numbers of people panning for gold are also contributing to creating a climate of instability in Abéché. Crime and violence are surging.

Abdoulaye Ould Mohamedou: Security along the border with Sudan is a problem. Inter-communal conflicts are common in neighbouring Darfur and trigger massive population displacements. In January 2022, for example, we witnessed the arrival of over 6,000 people fleeing the violence in Sudan.

Abderahman Ibet: The influx of such large numbers of refugees that began in 2003 has destabilised the local population. When they first got here, they used a large part of the arable land and benefited from humanitarian aid, food in particular. It wasn’t the case for many Chadians, so it sparked tensions between the host population and the refugees.

What do MSF’s teams do in Adré? What’s the situation concerning access to medical care? 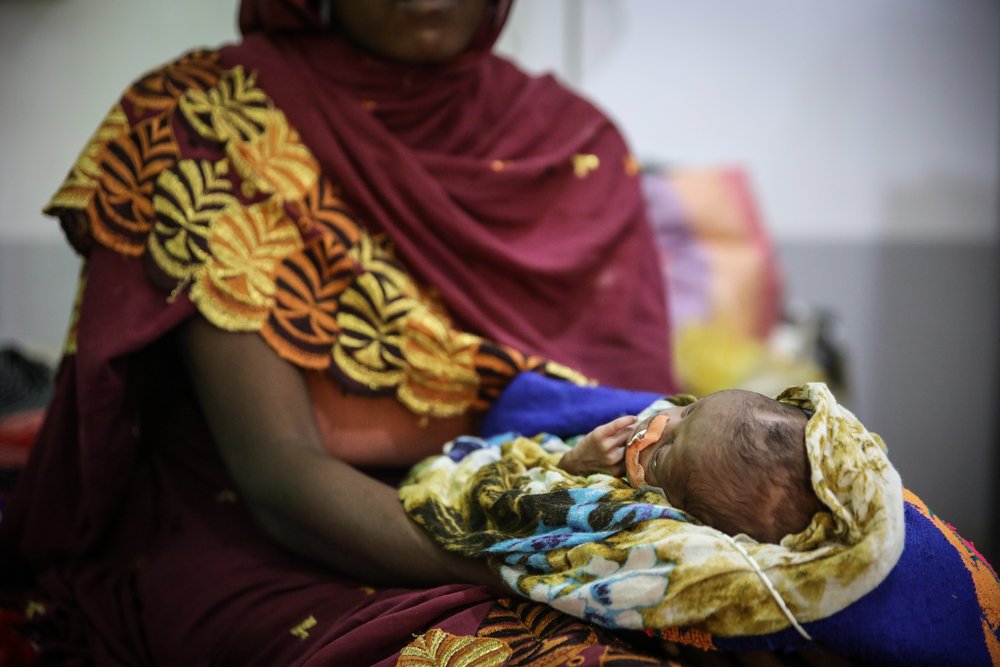 Mohammad Ghannam/MSF
Child malnutrition remains an everyday emergency in Adre, eastern Chad. The threat of the neighboring conflict in Sudanese Darfur keeps hanging over the area while people endures dire living conditions with limited access to food and basic services.

Abdoulaye Ould Mohamedou: MSF’s current project in Adré was launched in August 2021. Its purpose is not only to assist the district with paediatric consultations for under-15-year-olds, but also to be pre-positioned near the border should there be a mass influx of wounded casualties. This district borders west Darfur where periodic episodes of violence force people to flee to Chad.

We treat an average of 1,000 patients in the emergency room every month. During malnutrition peaks we hospitalise around 10 a day, which is the case right now. 80% of outpatient consultations are for malnourished children and 60% of admissions to the inpatient department are children suffering from severe acute malnutrition. 50 of the paediatric department’s beds are allocated to their care.

During the rainy season, it’s harder for people to reach medical facilities. For example, we’ve noticed in the centres we assist in Mahamata and Ibouta that when water levels rise in wadis (stream beds) families can’t get through to attend outpatient nutrition treatment appointments. This has a direct impact on the health of malnourished children.

There are also issues with quality of care because we don’t have enough qualified personnel and equipment. And we’re unable to offer all the specialities or access to certain biological tests and paraclinic exams, such as radiology.

''We treat an average of 1,000 patients in the emergency room every month. During malnutrition peaks we hospitalise around 10 a day, which is the case right now. 80% of outpatient consultations are for malnourished children and 60% of admissions to the inpatient department are children suffering from severe acute malnutrition.''

Abderahman Ibet: I worked on the Adré project before, and I remember that when families heard MSF was offering free paediatric treatment, the number of children receiving care increased substantially compared to previous years. People travel long distances because treatment is free. We have Sudanese refugees coming from the other side of the border in Adikon to get their children treated in the paediatric department MSF supports. 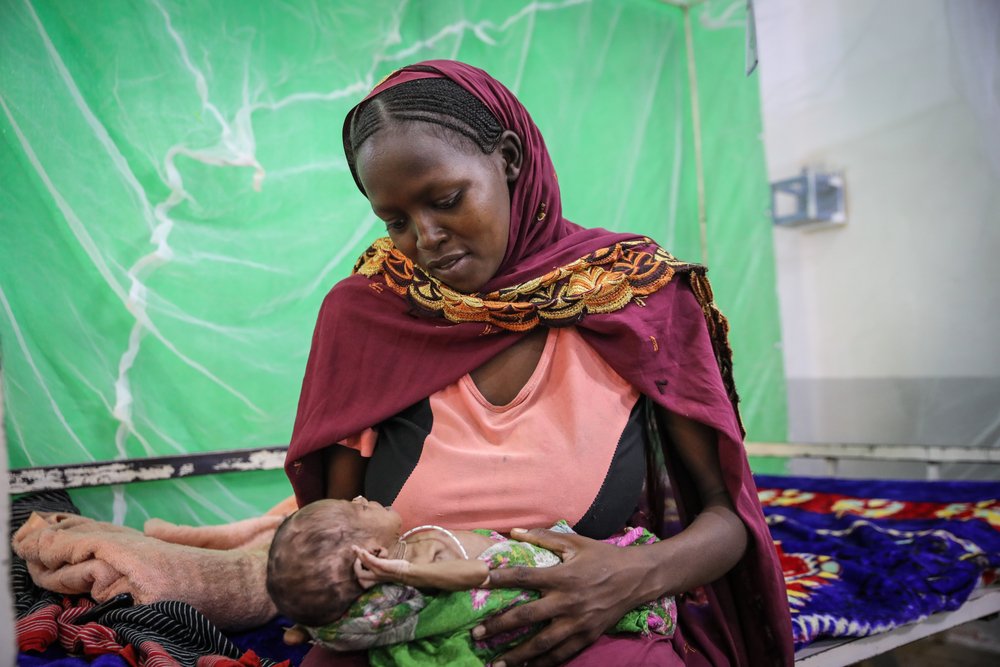 Mohammad Ghannam/MSF
Mashkutra is 19, she's the mother of 33-days old Maisa, who was born prematurely. Maisa was admitted to Adré hospital for severe acute malnutrition. “I can't breastfeed her, and we don’t have any money as her father is unemployed”, the mother said. Child malnutrition remains an everyday emergency in Adre, eastern Chad. The threat of the neighboring conflict in Sudanese Darfur keeps hanging over the area while people endures dire living conditions with limited access to food and basic services. 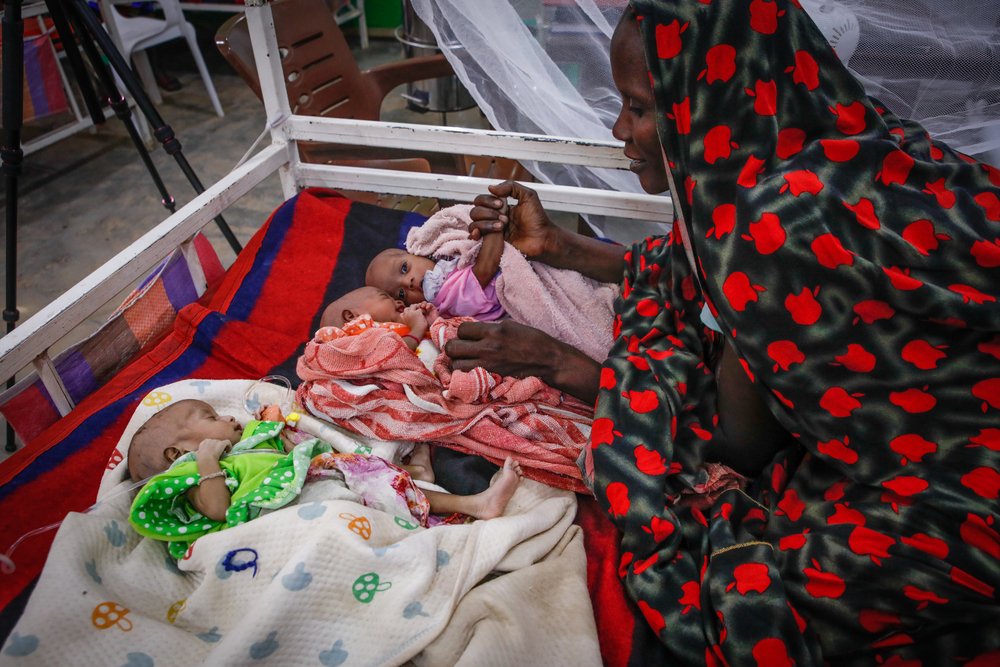 Mohammad Ghannam/MSF
Fatima came with her sister Makkah to Adré hospital. Makkah is 25, she is the mother of 21 days old triplet girls Sa’adiah, Souad and Masoudah. They come from a village called Echbarra, and they came to Adré hospital because the triplets are suffering from malnutrition.

What are the challenges in Adré district?

Abderahman Ibet: Everything’s really expensive and children don’t get enough to eat. At the same time, they suffer from other diseases, like malaria, and don’t receive treatment because their parents don’t have the money to pay for it. There are many cases of malnutrition and children struggle to recover. Even the big cities, like Abéché and N’Djamena, are seeing a sharp increase in malnutrition.

Abdoulaye Ould Mohamedou: Mothers lament the fact that they have no money. These are people who live off traditional, non-intensive agriculture that relies heavily on rain. They earn a little cash from livestock breeding, but families here are really very poor.

This is a remote district and accessing resources, which are limited anyway, is a challenge. During the rainy season water levels in the wadis rise, which prevents people from moving around. One of the causes of malnutrition in the area is the problem of access that impacts supplies and food prices. 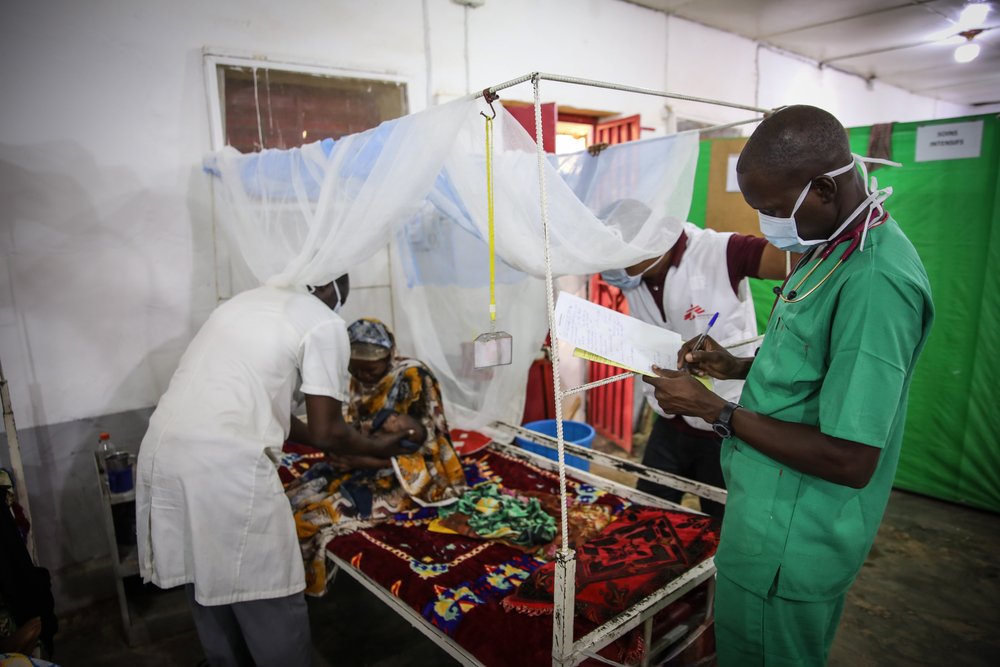 Abderahman Ibet: Clean water is a huge challenge too. Not all families in the big cities have access to it. Even though Abéché is a major urban centre, people use rainwater. Further east, in districts like Adré, people use well water, but because it’s untested, they have no idea of its quality. There’s no clean water whatsoever in the villages, so everyone drinks wadi water.

Today, the true face of east Chad - that of an impoverished population who struggle to find work, who subsist solely on what they harvest, the countless out-of-school children - is invisible. This is a population that is suffering, and because we do not get to see the true face of the region, there is a lack of funding.