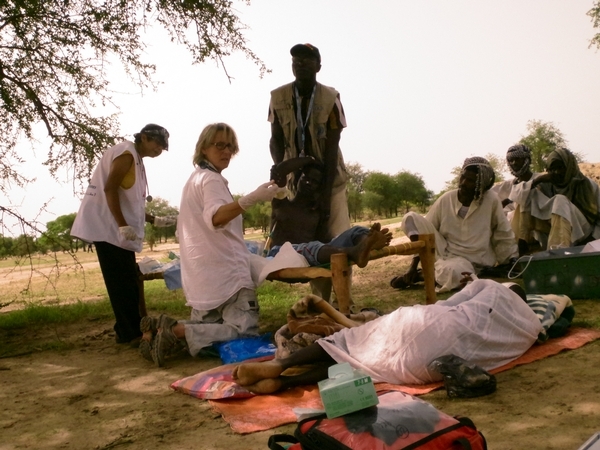 Tens of thousands of refugees and returnees in Chad, who have fled violent clashes in neighbouring Darfur since early January, are still desperately in need of clean water, proper shelter and access to healthcare, according to the international medical organization Médecins Sans Frontières/Doctors Without Borders (MSF).

Before the arrival of Médecins Sans Frontières in early April, Tissi had no functioning hospital. Médecins Sans Frontières is now running a health center in Tissi, a health post in Um Dukkum and mobile clinic services to Gadar and Ab Gadam. To date, medical teams have consulted 4,700 patients, including refugees, returnees and local people at all three locations, and more than 200 children have been treated for malnutrition at inpatient and outpatient feeding centers.

Since Médecins Sans Frontières began supporting the Tissi hospital, 24% of all admissions have been violence related.

“We  remain concerned about those who are unable to reach the camps in Chad and are either exposed to ongoing violence or have no access to humanitarian assistance”, says Tom Roth, Chad Médecins Sans Frontières Operation Manager.

Médecins Sans Frontières is also concerned about the deteriorating condition of more than 22,000 Chadians who had previously fled to Darfur to escape from violence in Chad. They qualify for only limited aid. Most of the returnees and refugees are female-headed households with a large number of youths and children under the age of five, who are particularly vulnerable.

Médecins Sans Frontières has increased its non-food item (NFI) distribution, with a recent distribution of 2,500 NFI kits to returnees in different locations, and is directly supporting the Ab Gadam refugee camp by building 200 latrines and providing water trucking service. The situation in the camp remains critical with 10 liters of water distributed daily to each person, which is half the recommended minimum amount universally recognized to cover basic needs.

“As the rainy season begins, we are concerned that insufficient access to clean water, hygiene facilities and latrines could lead to an outbreak of diseases, such as cholera”, says Jason Mills, Head of Mission in Chad.

“We are also seeing increasing levels of malnutrition and fear that the limited food assistance to returnees could exacerbate the situation.”

In response to the relocation of refugees from Tissi to Ab Gadam, 30 kilometers away, MSF has split its team up to react to the urgent needs of the camp, and will remain in the area to provide emergency response until the end of the rainy season in November.