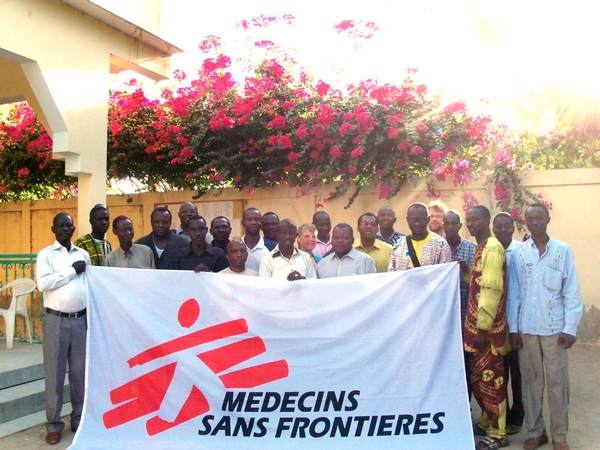 Médecins Sans Frontières (MSF) has just marked 30 years in Chad. Three decades ago, medical teams arrived in the country to provide aid to people displaced by civil war and to support the national health system which had been destabilised by the armed conflict. Today, in the bustling capital of N’Djamena, MSF team members ­– both old and new – are celebrating the anniversary.

For stock manager Timoleon Mallah Malandjigue, 2012 marks 25 years of service with MSF. “I joined in 1987 as a driver,” says the father-of-three, “and after three months I became a logistician.”

During his long career, Timo has seen MSF’s mission in Chad grow. “MSF did a lot of things in Mayo Kebi and Logone, in the southwest of the country. The hospital in Doba had some buildings, but they needed equipment and systems to provide healthcare to the local people,” says Timo. “MSF worked with the Ministry of Health to improve this situation.”

Forging links with the local population and the Ministry of Health has been a feature of MSF’s work in Chad since the early days. “At this time, to help people understand what MSF was, we recruited some co-ordinators to go to the furthest villages,” says Timo. “The community participation really helped, and today local people are managing some of the health centres by themselves.”

MSF’s programmes have expanded considerably in recent years. “MSF has focused more and more on emergencies,” Timo says. “When refugees from Sudan and Central African Republic arrived in the east and south, they benefited from MSF’s support, but the local Chadian population received assistance as well.”

The past year has been particularly busy, with MSF running eight separate projects in 12 locations. This has included support to the Ministry of Health hospital in the town of Am Timan, in southeastern Chad, where the team delivered 1,700 babies, admitted almost 2,000 under-fives, and enrolled more than 5,000 children in a feeding programme. MSF also set up a tuberculosis programme, with 88 patients starting treatment.

When the conflict in neighbouring Libya began, MSF’s response capacity was put to the test as thousands of Chadian migrant workers flooded across the border. MSF provided short-term medical support to three health centres in the north of the country, treating more than 3,000 returnees.

At the end of 2011, MSF led a meningitis vaccination campaign in Mandelia district, 50 km from the capital, using a new vaccine known as the MenAfrivac. The mass vaccination campaign saw more than 100,000 people inoculated – equivalent to a coverage rate of 91 percent. The revolutionary new low-cost vaccine protects people from the disease for ten years as well as reducing the spread of the meningitis bacteria.

In early 2012, MSF’s teams in Chad are preparing for possible new emergencies. With a potentially devastating drought hitting the Sahel region, tackling a major nutrition crisis is likely to be a priority, while outbreaks of cholera and measles are also expected.

After 30 years, MSF continues to have an impact on the lives of many Chadians – including its own staff. “Without realising it, MSF has had a very positive impact on my behaviour,” says Timo. “Today I can’t pass by an injured person and not help him. The same if I see an ill person on a cart, I will help him to go to the nearest health centre. These kinds of actions became natural, and it’s because of my work with MSF. The humanitarian spirit lives in me.”