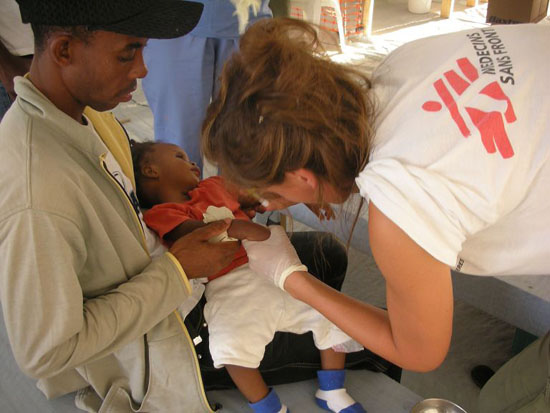 Cholera Emergency in Haiti far from over

The cholera epidemic in Haiti has stabilized in the Artibonite region, the epicentre of the outbreak,  but continues to spread in the Northern and Southern parts of the country. The emergency is not over and every department in the country is now affected.  Overall, MSF has more than 4,000 staff members working on cholera in Haiti, and they have treated more than 75,000 patients since the start of the epidemic. Some 13,000 new patients presented in one week in mid-December across the country.

“In places where we’ve been able to effectively communicate with communities, we have seen some stabilization and even some decrease in the numbers of new cases,” said Delphine Chedorge, MSF’s head of mission in Haiti. “This is a crucial aspect of the cholera response, because people need to know what they are dealing with, what they can do to help people who have contracted the disease, how they can avoid contracting it in the first place.”

MSF continues to operate 47 Cholera Treatment Centers (CTCs) throughout Haiti and is planning on opening more in the near future to serve areas that are newly confronting the disease. CTCs should open soon in the southern towns of Les Cayes and Jeremie, while additional exploratory missions and communications programs—in order to educate populations about the nature of and treatment for cholera—are being conducted elsewhere in the same region.

In Port-au-Prince, there was a big spike in the case load in mid-December, when traffic in the capital was snarled and mobility limited during the days of unrest that followed the announcement of the preliminary results for the presidential elections. Overall, the numbers at MSF’s CTCs in the city jumped from 2,000 new cases to 4,100 cases  though the rate of progression has since slowed as the situation in the capital stabilized. Overall, MSF’s cholera teams have treated more than 21,000 people in the capital in the past two months.

In the Nord department, there were more than 3,500 new cases in one week, but there wasn’t the same kind of rapid increase as there was in Port-au-Prince, and overall, the situation in the department seems to be stabilizing as the numbers of new cases plateau.

Haiti 2010 © Aurelie Baumel/MSF
Haiti 2010 © Aurelie Baumel/MSF
In the Nord Ouest department, MSF has treated approximately 7,000 people, but the caseload seems to be stabilizing there as well. The same goes for the northern parts of the Artibonite region, where the epidemic began. In the southern part of Artibonite, the numbers actually began to drop last week. Overall, there were 1,200 new cases in the whole of Artibonite, pushing the totals there above 26,000.

The overall case fatality rate remains below two percent, but MSF continue to press efforts to educate communities  - particularly those where the disease is just now appearing - about cholera, its causes, and its treatment in hopes of assuaging fears and helping people understand why new CTC are crucial to treat patients and arrest the spread of the disease.

“It is hardly surprising that people would be anxious about cholera when it appears in their communities for the first time,” says Delphine Chedorge. “But as we tend to the new cases that present at our programmes and that our assessment teams find in areas that haven’t had medical services until now, we also need to make people understand that opening new CTCs in or near their towns and villages can help stop the spread of the disease, protecting their communities, rather than endangering them.”