Cholera in northern Syria: another challenge in an already precarious humanitarian situation

It is 9 am in the war-ravaged but still bustling city of Raqqa in northeast Syria. Fatina, who is originally from Aleppo, is lying on her bed in an MSF-supported Cholera Treatment Unit (CTU). She is still feeling weak, so a nurse is helping her drink an oral rehydration solution (ORS) from a cup as she recovers from cholera, a disease that hasn’t been seen in Syria for over a decade. Fatina came to visit her son who moved to the city after fleeing the fighting in the northwest of the country ten years ago. But her hopes of a happy reunion were quickly dashed after she became ill shortly after arriving. Now she is getting ready to see her family but it’s not in-person, it’s the next best thing, through a video call from a service provided by the CTU to minimize the number of visitors and help stem the spread of the bacteria.

“I came to Raqqa to visit my son several days ago, and then I found myself here”, said Fatina. Having survived the conflict that has battered the region since 2011, Fatina found a new threat looming. “I was first hospitalized at Raqqa National hospital by my family. My condition got worse; I was suffering from a severe headache, diarrhea, and uncontrollable vomiting when I arrived at the CTU. I am not sure why I got so sick, but it felt like I was dying”. 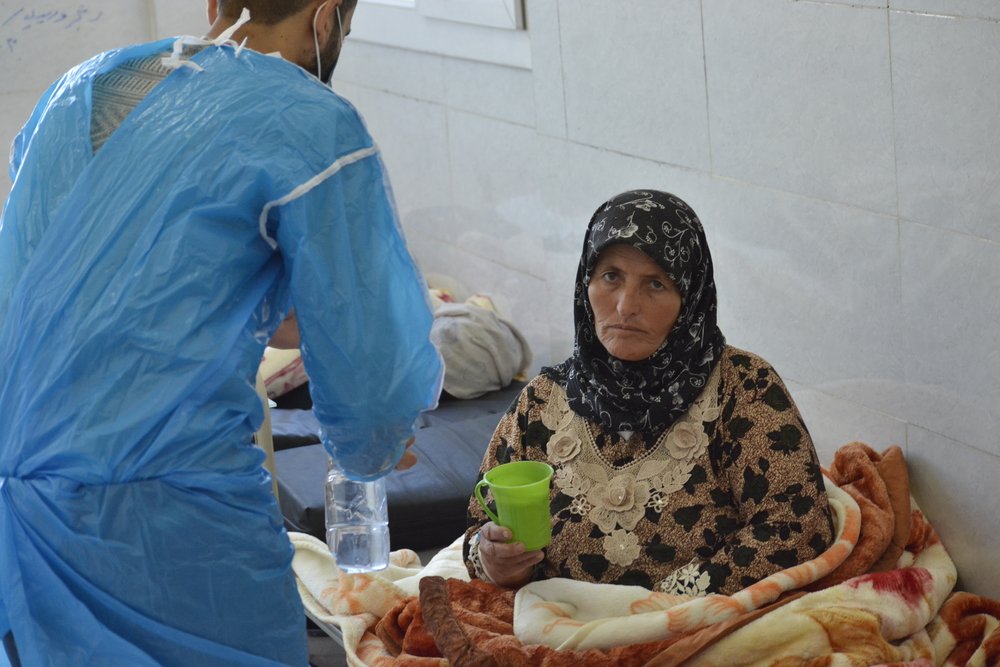 In northeast Syria, MSF is responding to the outbreak in partnership with local health authorities, including providing support to a cholera treatment Unit (CTU) in Raqqa. The centre in Raqqa used to be a COVID-19 hospital but laid quiet for months, as the number of patients in critical condition dwindled and a dedicated facility was no longer deemed necessary. Now the lights are back on, and a reassuring reception team sits at the front desk greeting patients on arrival. Several cleaners are maintaining the hygiene at the clinic, mopping floors and wiping down surfaces, clearly understanding the importance of disinfection after having worked during COVID-19 when the wards were over-run with patients.

Since the cholera outbreak was first declared in September, MSF has treated more than 3000 suspected cholera cases in the northeast. With water levels in the Euphrates diminishing due to a prolonged drought, and many communities resorting to compromised sources such as the river or open canals to fetch their water, the danger of a full-blown cholera outbreak remains, particularly with the local health infrastructure having been decimated by 11 years of conflict. 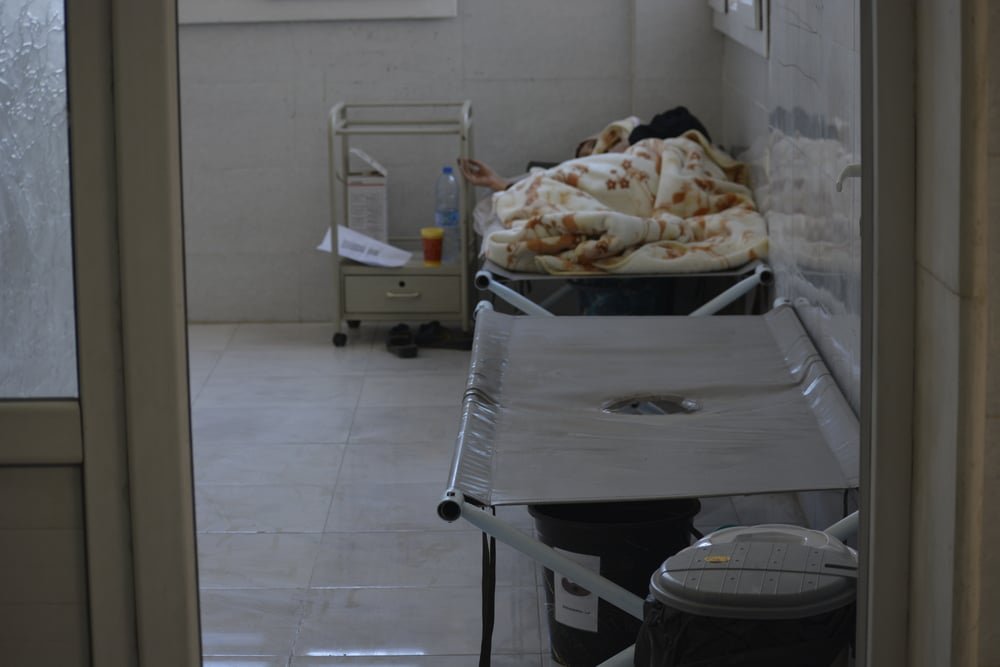 In Idlib governorate, in northwestern Syria, Alaa Hassan, 30, arrived at the MSF-supported 24-bed Cholera Treatment Unit (CTU), the only unit currently activated in the area, exhausted and ill. “At first, I thought it was just a normal intestine infection, but within hours, my vomiting and diarrhea worsened, I almost passed out, and my blood pressure suddenly dropped”, said Alaa. Her mother-in-law had similar symptoms, but they didn’t know the source of the infection. "I heard about the spread of cholera in Syria, but I did not expect to catch it and suffer from such serious symptoms,” she added. Two days after she was admitted to the CTU, and not long after receiving treatment, all her symptoms had resolved.

In northern Idlib, MSF is also supporting another CTU, and two others in Afrin and Al-Bab, northern Aleppo, in partnership with Al-Ameen Organization. In addition, we are also running and supporting four Oral Rehydration Points (ORP) as the first step in treatment, for patients who are showing symptoms, but aren’t at the stage that they’d require hospitalization. Around 300 patients have been treated in the ORP’s and 220 patients in the CTU’s in northern Idlib, approximately 20% of whom were considered to have severe symptoms. Most of these severe cases were due to a delay in seeking treatment.

First linked to the contaminated water from the Euphrates River and the severe water shortage in the north of Syria, cholera first emerged in Deir ez-Zur, then traveled along the Euphrates to Raqqa and to Aleppo in the northwest before quickly spreading across the country. 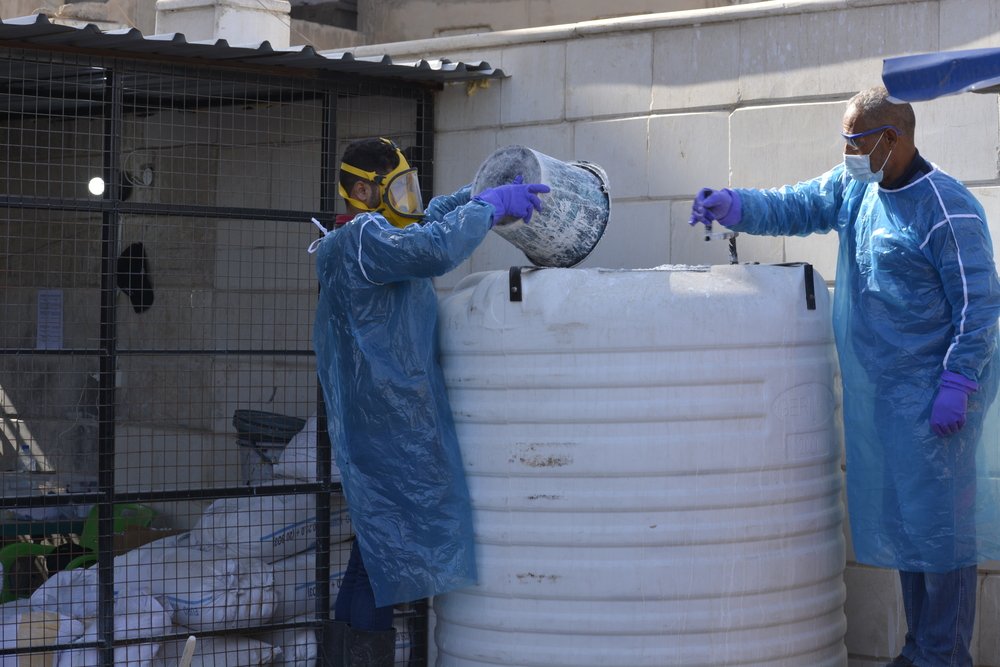 Dalal and her sick son Saleh, who are from the countryside of Raqqa, a few hours' drive away, were referred to the Cholera Treatment Unit in Raqqa just one day ago. She desperately made her way to the centre with her severely ill baby, using public transport, and travelling on a minibus. With her baby losing fluids, and getting fainter by the minute, the journey felt like it would never end. A mother of eight, she had to leave her other children with their father.

“I have 8 kids, my son, 5-month-old Saleh, is the youngest,” said Dalal, who sits on a bed with her son who is peacefully sleeping at the CTU. ‘He had severe diarrhea a week ago. I thought it might be because of the sheep’s milk but his health deteriorated. I brought him to this centre and thanks to God, he is feeling much better now”. 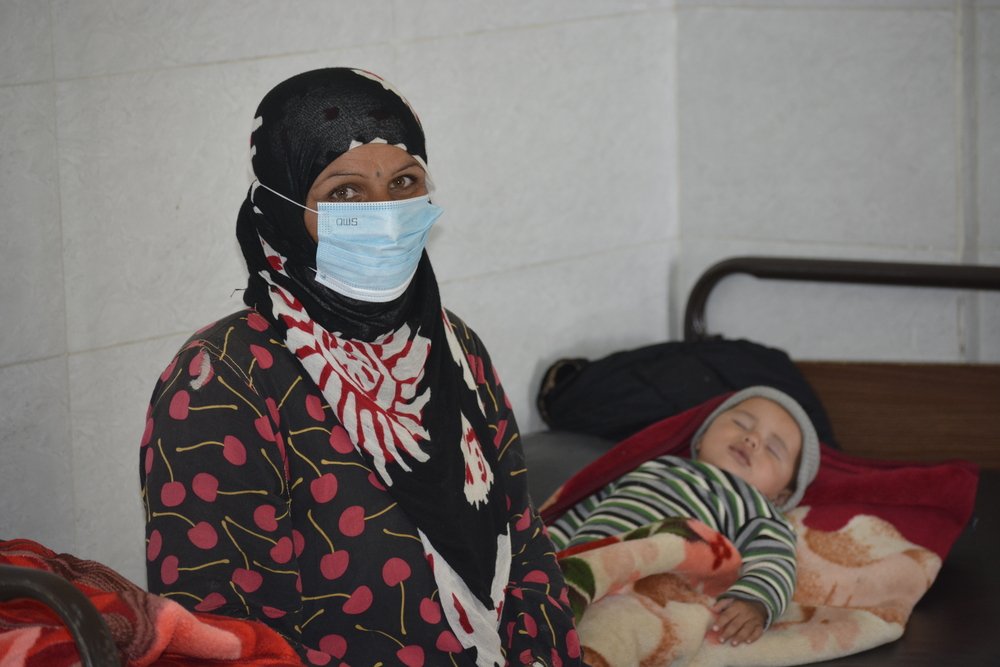 Azad Mourad/MSF
Dalal and her son were treated at the new MSF-supported cholera treatment centre in Raqqa, northeast Syria.03 November 2022

Ahmad Ali is from the Raqqa CTU Health Promotion Team. He is one of a group of community health workers in Northeast and Northwest Syria who are on-hand to visit patients in their rooms and meet with families to talk about their concerns and answer their questions. They also explain how to recognize the early symptoms of cholera, and what to do if someone suspects that they or a family member has caught the disease. 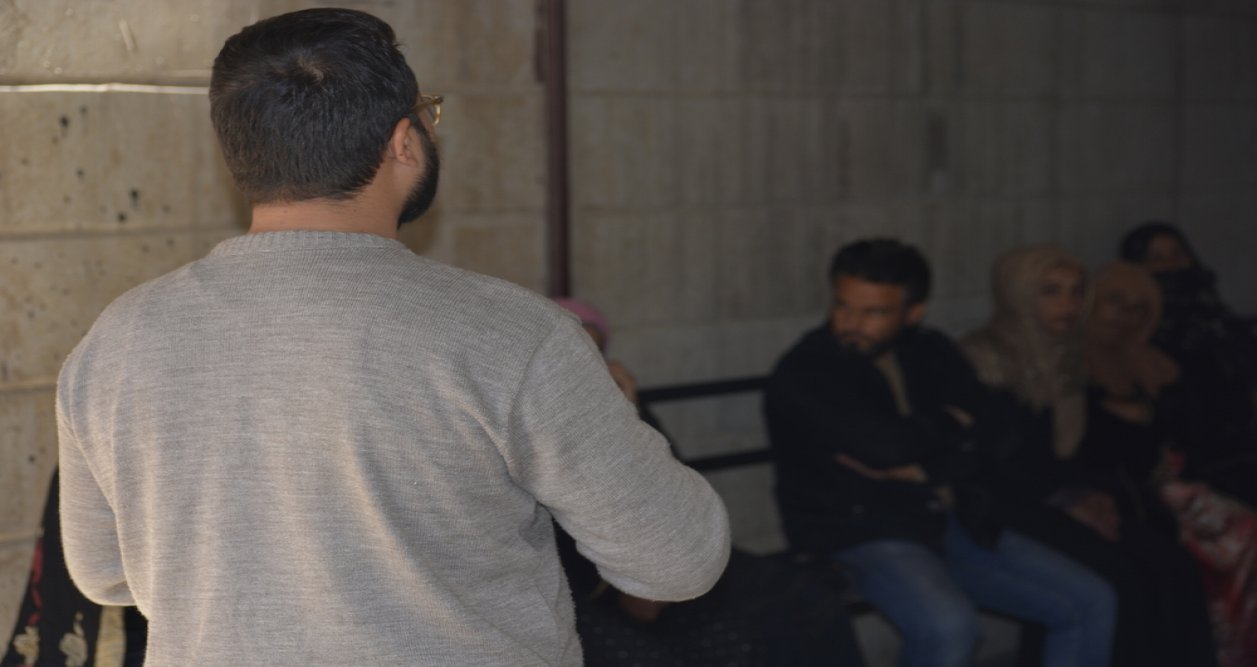 “Some families in the rural areas in Raqqa were telling me that they were using the water directly from open canals or the river for their household needs and for drinking. This water is contaminated and unsafe and when the nearby water plant isn’t functioning, people will naturally look for other resources, which leads to contracting the disease”, said Ahmad.

“We used to see 25 patients on average every day, but [in northeast Syria] cases have markedly decreased. People now know better how to protect themselves and their families from infection,” Ahmad added. While northern Syria faces another harsh winter, amid an already unstable security situation, local communities are doing everything they can to help curtail the outbreak, so it doesn’t add another layer of complexity to an already precarious humanitarian situation.