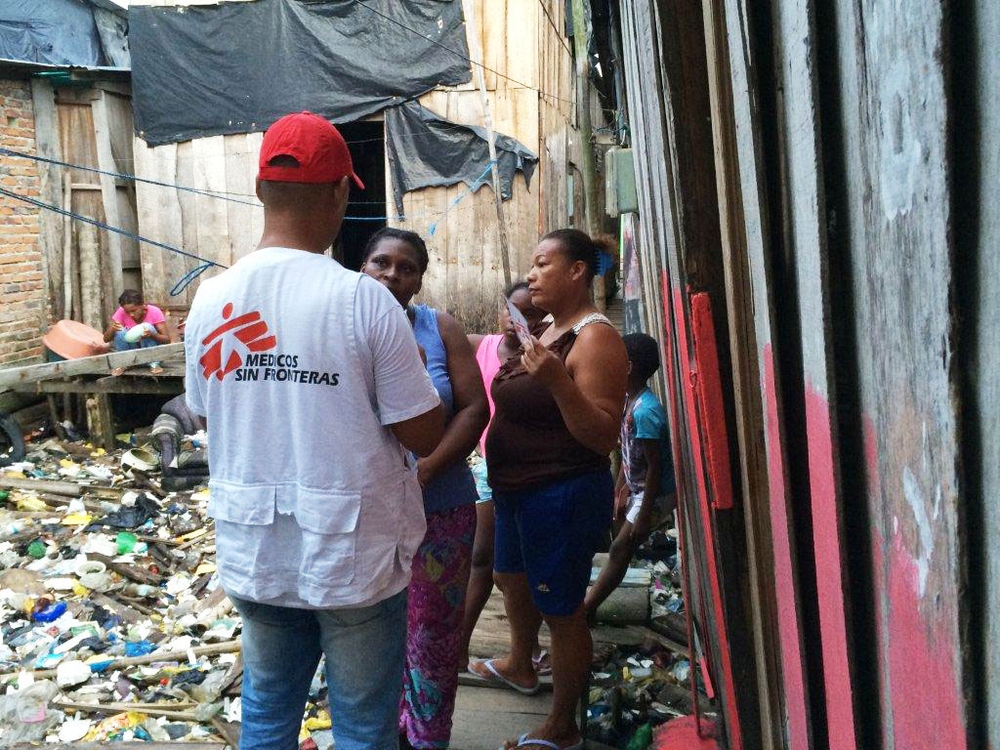 Colombia: The disease that doubles you over

We walked across a narrow bridge made of old boards corroded by time and salt water, surrounded by humble, austere houses.

This is Tumaco, a city in the south-west of the Colombian department of Nariño, where the general state of abandonment is plainly seen.

Chikungunya disease; 'bent over with pain'

People receive us with interest, wanting to know about this Chikungunya disease, whose exotic name comes from the African language Makonde – it was first detected in Tanzania in 1952 – and means ‘bent over with pain’, in reference to sufferers’ stooped appearance because of the joint pain it causes.

This little-known virus causes high fever and severe pain in joints after being bitten by an infected mosquito. In Colombia, it has already affected 208,044 people so far this year, according to the National Institutes of Health. The first cases were recorded in September 2014.

The team from Médecins Sans Frontières/Doctors Without Borders (MSF) and the Nariño Departmental Institute of Health continue their tour of this impoverished neighbourhood to raise awareness of the disease among inhabitants.

They go from house to house, instructing them to cover food and drinking water and clear away items that might suffer some type of damage when they leave their houses for at least half an hour so that they can be sprayed. 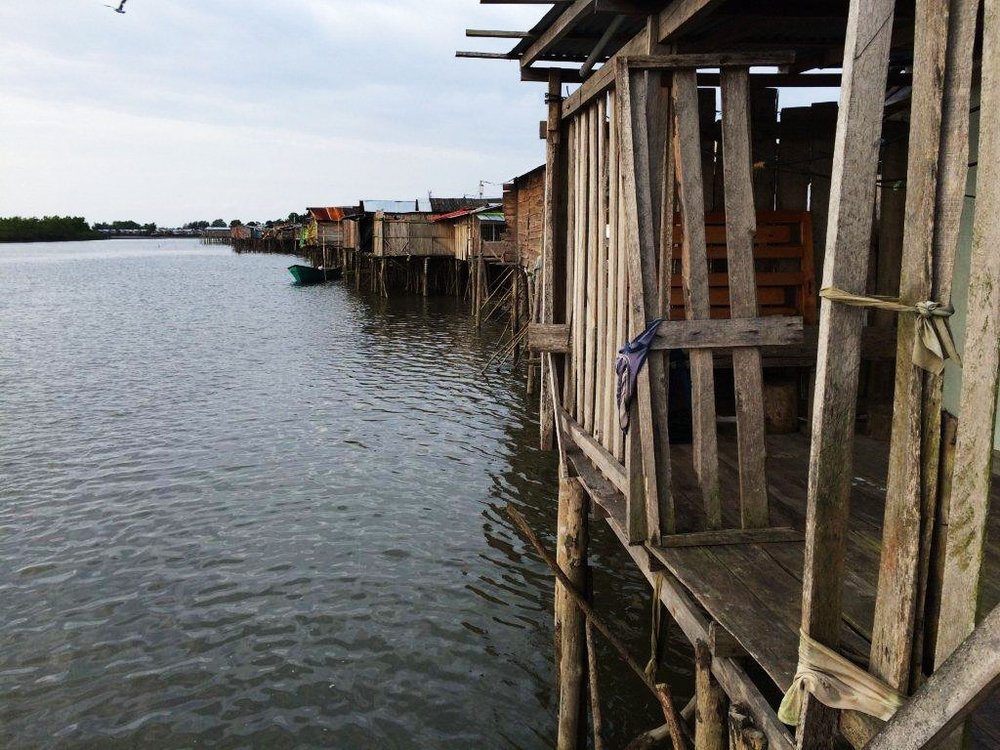 MSF
The most vulnerable villages in Tumaco are built on stilts over water. Seeing as mosquitos congregate around stagnant water, the proximity of mosquito breeding sites to human habitation is a significant risk factor for Chikungunya.

"Everyday I wake up with a new and intense pain"

In a humble abode, an elderly lady who is lying in bed, alone, distressed, looking both sad and in pain tells us that she has been suffering for a month:

“Since last month I have been dragging my feet when I walk around the house, as if they were made of iron, and every day I wake up with a new and intense pain. In all this time there has not been a day when I don’t have a fever, my head doesn’t hurt or I don’t wake up with swollen hands and ankles. I also suffer from sore shoulders, knees and neck, and itching all over my body. But what makes me panic most is the flaking I have on the soles of my feet and my elbows, as if I was a fish.”

These are the symptoms of Chikungunya, which has now accumulated 930 cases in Nariño since 2014, although the number is probably much higher since most sufferers are not diagnosed, as they do not take the specific test.

Manual spraying for vector control in the most vulnerable neighbourhoods, where the houses are built on stilts over water, has been carried out in 10,000 homes, protecting about 50,000 people.

In addition to the spraying, MSF has trained emergency medical personnel in several hospitals in clinical diagnosis, treatment and epidemiological reports.

The MSF team has also explained to pharmacists the complications of mismanagement and the need to refer the sick to health centres.

The role of the pharmacist in Colombian culture

In Colombian culture, the pharmacist plays a key role, as it is the person that patients feel close to and that they can call on because they trust them, whereas the doctor is perceived as being an unapproachable and distant figure.

This situation is more pronounced in Tumaco, partly because of the difficulties in getting healthcare.

In local pharmacies, people find an immediate and effective response to a large percentage of their minor ailments. 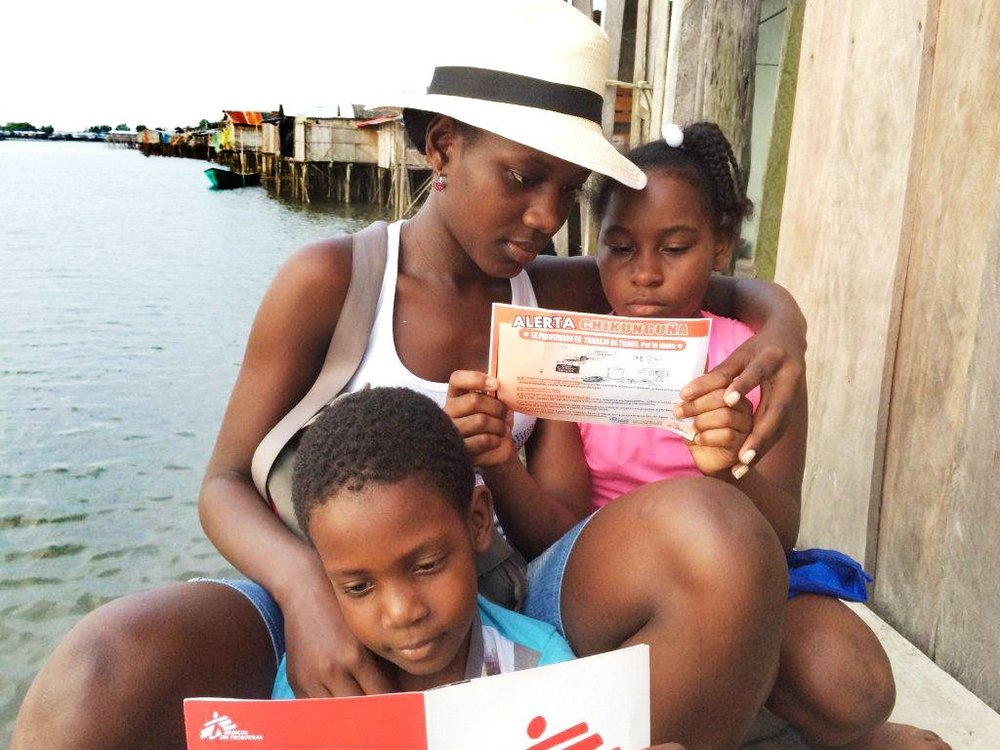 With the epidemic of Chikungunya, people have felt that the long waits in the emergency department only to return home with a dose of acetaminophen (paracetamol) do not justify the sacrifice of going through this ordeal, and they are looking for alternative pharmaceutical remedies to their severe pains.

Unfortunately, in this case there is little knowledge of the disease as it is a new disease in our country for pharmacists and health workers.

Therefore, another element of the organisation’s response has been the donation of 600 tests to help diagnose this emergent disease and help sufferers get the proper treatment.

A painful, viral disease with no specific treatment available

Chikungunya is a viral disease transmitted to humans by infected mosquitoes. It causes fever and severe joint pain. Joint pain is often debilitating and can vary in duration. Most patients recover fully, but in some cases joint pain may persist for several months, or even years. Other symptoms include muscle pain, headache, nausea, fatigue and rash.

The disease shares some clinical signs with dengue, and can be misdiagnosed in areas where dengue is common.

There is no specific antiviral drug treatment for Chikungunya. Treatment is directed primarily at relieving the symptoms. There is no commercial Chikungunya vaccine.

The proximity of mosquito breeding sites to human habitation is a significant risk factor for Chikungunya.

In 2007, disease transmission was reported for the first time in a localised outbreak in north-eastern Italy. Outbreaks have since been recorded in France and Croatia.