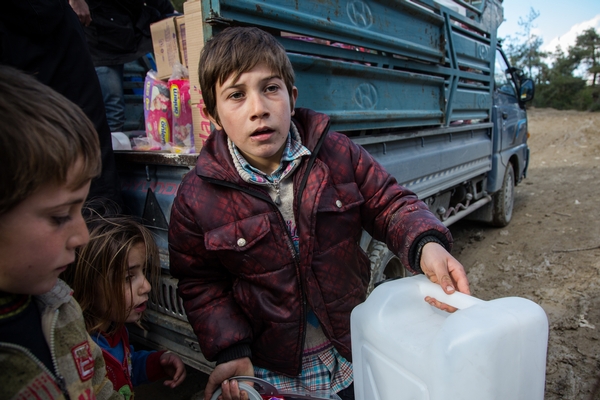 The access granted to chemical weapons inspectors in Syria is a sign of what can be achieved if enough of the right energy is channelled in the right way.

But moral responsibility doesn’t stop with the first signs of success in dismantling chemical weapons – in fact that’s just the start. Undoubtedly, reducing the potential impact of such weapons is a positive move.

However, Syrian people are now presented with the absurd situation of inspectors freely driving through many areas of desperate need, while the ambulances, food and drug supplies organised by humanitarian organisations are blocked.

Reports from areas under siege suggest communities are desperate for food and have almost entirely run out of even the most basic medical supplies. The recent confirmation by the World Health Organisation (WHO) of polio cases is symptomatic of the deterioration of what once was a highly-functioning system of healthcare.

Earlier this year Médecins Sans Frontières teams vaccinated 75,000 children to stem a measles outbreak. Both patients and medical workers in Syria today are facing severe challenges as almost 60 per cent of the hospitals are now damaged or destroyed.

Arrested and tortured for treating patients

Syria 2013 © Nicole Tung
A boy carries a jerry can and blankets away from the MSF distribution truck in northern Syria. Syria 2013 © Nicole Tung
The adversity is heightened because of the lack of skilled medical workers remaining in the country; since the beginning of the war, health workers have been targeted. Médecins Sans Frontières has heard many accounts of Syrian medics being arrested and tortured for treating patients. As one orthopaedic surgeon explained, “Being caught with patients is like being caught with a weapon.”

As the war continues, the numbers of people in need of medical care is rising. In the space of just two weeks, one of our field hospitals launched nine mass casualty incidents. This is when the influx of wounded patients exceeds the capacity of the hospital because they all arrive together, and with injuries so severe that many need life-saving treatment at the same time.

Skull fractures, crushed limbs, gunshot and shrapnel wounds are typical injuries that medical staff in Syria have to deal with.

It is easy to forget that in the midst of explosions there are also patients who are indirect victims of the war – toddlers who have been severely scalded by pots of boiling water in overcrowded IDP (internally displaced persons) camps; asthmatic children who come to our emergency room for oxygen because inhalers are no longer available; pregnant women in need of emergency c-sections as they haven’t been able to get pre-natal checkups.

Médecins Sans Frontières is running six hospitals, two health centres and several mobile clinic programmes inside Syria; this is not easy, but shows that it is possible. We are able to keep working in these areas through a persistent process of dialogue.

Our teams have to explain to everyone in the areas we work in that Médecins Sans Frontières is medical organisation and that we are there with one simple aim – to treat anyone that needs medical attention.

We emphasise that we don’t take any government funding for our work in Syria in order to remain completely free of any political agendas.

Occasionally when we feel this is not well understood, we have to temporarily reduce our teams for their safety, continue talking, and then return to a full strength medical and logistical team when we are confident that our presence as a neutral, impartial humanitarian organisation is accepted.

The lack of respect for humanitarian workers makes the job of negotiating access slow and painstaking. It is virtually impossible for medical aid to cross front lines because of the mistrust of anything coming from the other side, and the blockages around enclave areas have so far been unbreakable.

Influential countries gathered around a table, thrashed out an agreement on chemical weapons and put it into practice. They have shown it can be done, the same must happen now for humanitarian aid, especially medical care for people caught up in conflict and to afford some protection and respect for medical staff on the ground.

Jane-Ann McKenna is the Director of Médecins Sans Frontières/Doctors Without Borders Ireland. She has recently returned from a field visit to Jordan and Iraqi Kurdistan where she conducted a humanitarian assessment of Syrian refugees’ needs in neighbouring countries.

For the latest updates on Médecins Sans Frontières' work in Syria visit our Emergency Appeal.

This op-ed was first published in thejournal.ie on 2nd November 2013.