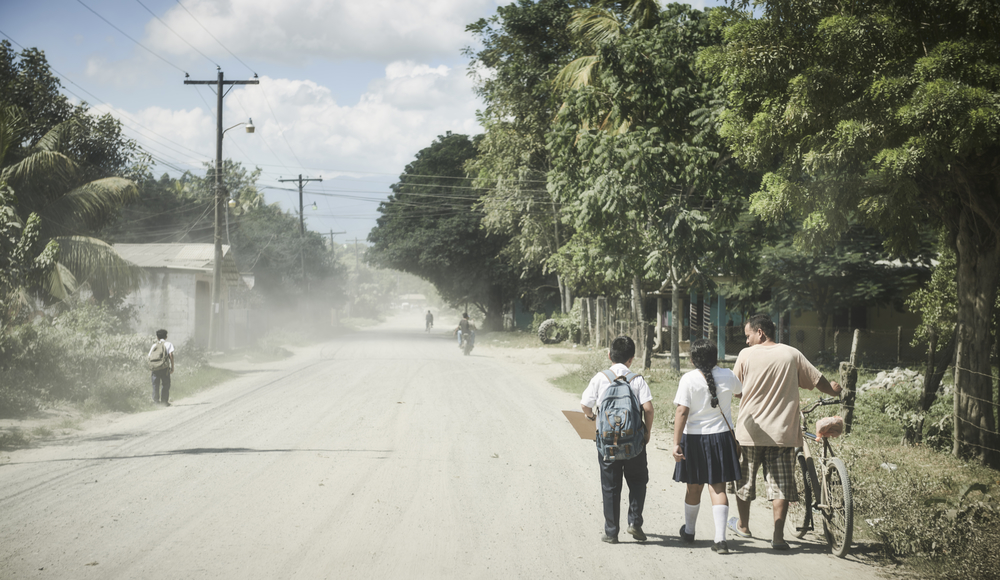 The consequences of violence in Honduras

Violence is an ever-present part of life in Honduras, which has one of the highest rates of homicide in the world. The atmosphere of tension and fear on the streets seeps into homes as well, often manifesting in domestic and sexual violence. Here, Honduran Médecins Sans Frontières / Doctors Without Borders (MSF) patients describe their experiences, both within the country and on the treacherous journey north through Mexico.

*Patient names have been changed to protect anonymity.

Mayelli’s life has been marked by violence since she was very young. Orphaned at the age of three when her parents were murdered by gang members, she was adopted by relatives. Her cousin, she says, began sexually abusing her when she was eight years old. No one did anything to stop it.

When she became a teenager she left her family, but, with few opportunities, fell in with gang members, including a man who became her partner. The two moved in together, but soon after he became physically abusive and tried to kill her. She struggled to make ends meet running a simple food cart until her partner took everything: her business, her savings, even all her clothing.

“I had nowhere to go and ended up living on the streets,” she says. With no other options, she decided to leave Honduras and head north, aiming to reach the United States, leaving her young son with relatives. She knew the risks involved with making the journey, but says she had no choice. “I had to leave because I did not have a job,” she says.

For now she’s staying at the Casa del Migrante migrant shelter in Coatzacoalcos, Mexico, where she received mental health attention from MSF and resting before continuing on her route. “I have experienced very hard situations,” she says. “I would like to have wings to fly.”

MSF has worked with migrants and refugees in Mexico since 2012. Currently, we seek to improve access to medical and psychological care for people along the migratory routes, prioritizing assistance to unaccompanied minors, women traveling alone, and victims of direct violence.

"Everything became a nightmare"

Arturo* wears a disguise to his therapy sessions with an MSF psychologist in Tegucigalpa, for fear that he might be recognized on the street by one of the attackers who destroyed his life. These days he doesn’t like to talk, and he neglects eating and bathing. He wakes up in the night screaming for his life, and has tried to commit suicide. His outbursts of anger frighten his family.

As a child, Arturo was the survivor of physical and verbal abuse at the hands of his father. At 13 he decided he couldn’t take it anymore and left home. Eventually he joined a group of football, and felt that he had found a family. Then, one day, the head of the group told Arturo that he had to kill a friend of Arturo’s.

When Arturo refused, he was told to disappear. Fearing for his life, he left Honduras. "I went illegally to the United States,” he says. “I took 15,000 lempiras [about 610 USD] that I had saved. But I could not cross [the border.] I was in Mexico for a while, then I had to come back to Honduras.”

Even after leaving the country and returning, the gang found him. They tried to extort him, but when Arturo couldn’t come up with the money they wanted. He went into hiding again, changing his address, but they tracked him down again. He was kidnapped and taken to what he calls a “crazy house” where the gang members tortured him.

They cut him with weapon in his pelvis and performed a satanic ritual. He was stripped and sexually assaulted. Eventually he lost consciousness.

After the torture, his next memory is of an unknown woman calling a taxi to take him to the hospital. When he arrived, he was asked what had happened to him and said only that he’d been attacked. He was referred to an MSF clinic, where he is currently receiving psychosocial care.

In Tegucigalpa, MSF’s “priority service”, run in collaboration with the Honduran Ministry of Health, provides emergency medical and psychological assistance to survivors of violence, including sexual violence. This free, confidential, one-stop service is available in three different locations in Tegucigalpa, including the city's main hospital. Medical treatment for rape includes post-exposure prophylaxis to prevent HIV and hepatitis B infections and the treatment of other sexually transmitted infections, such as syphilis and gonorrhea. Patients also receive counseling, group therapy, and psychological first aid.

"I just do not know if I'm pregnant"

It was a morning like any other in the clinic, while the MSF doctor was in medical consultation a thin, very shy and crestfallen teenager entered. Cecilia*, barely 14 years old, said, "I do not know if I'm pregnant." Invite her to talk about her case. I told her it was in confidence. When I consulted her general information, she told me that she did not know when she was born, that she had never had a birthday and that she only knew that she was 14 years old, because her father had told her. She never went to school, she could not read or write. When they delved a little deeper, the girl told her that her sister had taken her to a "crazy house”. What is that? I asked her. She answered that it was a mareros (gang) house. There she had sex with the gang leader, but she did not know exactly why. It was not the first time that happened, three years ago, while walking home a man had taken her to a mountain to abuse her. I arrived at his house, bleeding, dirty and disoriented." "The case of Cecilia – says the doctor – unfortunately is not isolated and represents the situation of many teenagers in Honduras, being a clear sign of the current social crisis. As a woman, in a country with many challenges in terms of gender equity; as an afrodescendant in a culture that fights against racism day by day and as a doctor, in a system where health has so many limitations and much to move forward, cases like Cecilia's reinforce my desire to advance and collaborate in education for this population of women (with emphasis on adolescents) of very scarce resources who do not have access, especially in the area of ​​sexual and reproductive health, or access to knowledge of their reproductive rights."

In March 2017, Médecins Sans Frontières (MSF) began working at a Mother and Child Clinic (CMI) in Choloma, a rapidly expanding industrial city in the department of Cortés, in northern Honduras, which is notorious for its high levels of violence. Before MSF opened the project, there were few health facilities to meet the needs of women in the area. Many pregnant women did not receive prenatal care and delivery services were extremely limited. The result was a high rate of medical complications among women of reproductive age.

MSF teams in Choloma provide family planning services, ante-natal and post-natal consultations, deliveries and offer psychosocial support to survivors of violence, including those who have suffered sexual violence.

our work in honduras >