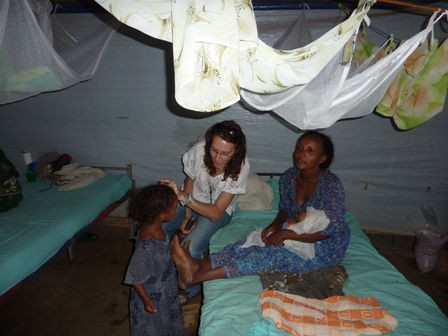 The cradle of humanity

Continuing our series on the outstanding efforts of Irish doctors abroad, Pat Kelly spoke to Dr Mary O’Brien of MSF about her work in Abdurafi, Ethiopia.

Located in East Africa, Ethiopia has an almost unique profile among African countries. An ex-monarchy, the country has had to contend with drought, famine, coups, uprisings and border wars.  Approximately twice the size of Texas, the country is landlocked and many areas suffer from water shortages due to water-intensive farming and poor management of resources.  Other issues facing Ethiopia include desertification, deforestation and soil erosion, and susceptibility to earthquakes in the Great Rift Valley.

MSF has a presence in the small, rural farming community of Abdurafi in northwestern Ethiopia.  One of the main challenges in working there is the oppressive heat, which can reach temperatures in the high 40s on a regular basis.  During the wet season, the area is totally cut off and communication is limited to satellite phone.

Combined with high infection risk from a wide range of diseases and a HIV infection rate that is far above the national average, providing healthcare presents extreme challenges to doctors working on the ground.  The country itself still contains certain areas where rituals and ceremonies have changed very little in over 1,000 years, in a part of the world often referred to by many as ‘The Cradle of Humanity’.

Dr Mary O’Brien spoke to the Medical Independent about how her training and previous work in Sudan prepared her for her recent stint in Ethiopia and the particular difficulties she and her colleagues faced in Abdurafi, where malnutrition and isolation often add to the challenges.

Where did you work before going to Ethiopia, and what is your specialty?

I was working as a sessional GP in Cork for two years prior to going to Ethiopia. I finished my GP training in Liverpool in 2007.

How long have you been working with MSF and how long was your most recent stint?

What were the main types of illnesses you were treating?

Our in-patient facility concentrated mostly on Kala Azar (KA) (visceral leishmaniasis); HIV-related illness; TB and malnutrition. We had many in-patients with HIV, KA and TB combined.  These patients were extremely complicated to treat and often took months to recover.  In the outreach setting, we were also supporting health posts in providing basic healthcare.

What were the main infection risks?

All kinds of infectious diseases are found in this area from vaccine-preventable diseases like tetanus, polio and measles, to tropical diseases like malaria and KA.

KA is a chronic and potentially-fatal parasitic disease of the viscera (particularly the liver, spleen, bone marrow and lymph nodes) due to infection by a parasite carried by the sand fly.  Abdurafi is also situated in the sub-Saharan meningitis belt.  HIV and associated opportunistic infections were a big part of our workload.  Unfortunately, the HIV positivity rate in Abdurafi is much higher than the national average due to the high numbers of migrant workers who come to this area for a few months every year to harvest the cash crop, sesame.

What was the length of your average working day there and what did it entail?

Each day can be quite varied, depending on the time of the year, considering the different disease peak seasons that we have, e.g. malaria in wet season, malnutrition in hunger-gap season and KA from September until January.  We started in the morning at 8am with a ward round on all in-patients; this was followed by admitting any new patients up to lunchtime at 12.

After lunch, at 2pm I usually did some office work (report-writing, supply management etc) before returning to the clinic for evening admissions and review of any critical patients or to catch up on any procedures that were remaining from the morning round.

Dinner was 6.30 and after this, more office work if needed or a welcome cold beer.  The Ethiopian MD and I rotated night shift duty. At quieter times of the year, we organised teaching sessions for local healthcare workers.

What were the conditions on the ground where you were based?

The main thing about Abdurafi is the incredible heat. The temperatures are regularly in the mid or late 40s, which makes it a difficult place to work and live, both for the local population, who were mostly migrants, and for us.  It is a very remote, isolated area with poor access to the outside world and only satellite phone communication.  In the wet season, it is completely cut off, with access only by a gruelling day-long ride in a tractor.

Was there a particular case/patient you treated there who had a significant impact on you?

I recall a family who came who were extremely poor.  The mother was malnourished and had pulmonary TB, the nine-month-old baby boy was severely malnourished, weighing only 2.5kg.  The older brother, aged about six, had KA (high fevers daily, extreme wasting) and the dad, who was underweight, had malaria when he arrived.

To make this story worse, they told us later that there was another brother in the family, a boy aged about 12, who had died one week before they arrived to the clinic from what they described as “a swollen knee and fevers”.  They all recovered very well and stayed in the clinic for about two months, looking healthy and happy heading home.  It is so lovely to see the smile coming back to the faces of patients.

How has your other experience of working overseas prepared you for Ethiopia?

I worked in South Sudan for 19 months. In Sudan, the weather conditions were similar and I also worked a lot with leishmaniasis there.  The northern-western part of Ethiopia, however, has a much more stable environment with no risk in terms of security, making it a nice place to work and live.

How did you cope on a personal level?

I tried to go jogging in the early morning before it got too hot. I found this very refreshing and a great way to start into the day.  There was a nice river nearby where you could go for a refreshing swim, which was always a great relief from the heat

Was there a sense of hopelessness among the people you were treating?

Not at all – the Ethiopian people have a great sense of hope and pride and are extremely hard-working. Many of our patients are resettlers.  The government offers a programme to move people from very barren, mountainous areas to areas like Abdurafi, where it is possible to cultivate some crops.

Many of these people suffer with chronic malnutrition when they arrive and they are looking for an opportunity to improve their future prospects, although it is difficult for them in the first years and of course they too hate the heat.

MSF has identified this group of resettlers as a particularly vulnerable group and aims to help to support them with healthcare in the first year of their arrival.

There are many improvements happening in our area, with plans to build roads and plans to build a government hospital.
For the moment, it remains an area of high morbidity.  More specifically related to KA, it is a disease that is usually treatable, if there is access to quality early diagnosis and treatment, which are two fields in which MSF tries to extend its support.  However, the treatment can be extremely painful and long, and that is why MSF, in collaboration with other actors, aims at developing alternative treatment solutions.