Cyclone Idai, Mozambique: "Beneath the waters, you will find us"

A. is a 26-year-old nurse working with MSF in Mozambique. She and her children survived Cyclone Idai, but her husband was killed. Despite the tragedy, she cares for patients in the most remote areas of Mozambique, in communities devasted by the effects of the cyclone. This is her story.

“I was born in a little town, but moved to Nhamatanda to study to become a nurse. I met my husband at a football match, right here on this field where we land the helicopter to run our mobile clinics. He was studying to become a teacher. We used to organise matches between nursing and education students, and in one of these games we met and fell in love.

In 2015, we graduated and married soon after, and we moved to his house to raise our family close to his parents. We had our son, who is now two years old, and my husband helped me raise my two older daughters from my first marriage.

My husband got a job as a teacher in Buzi district and moved away from home to teach elementary school. He used to come every month to see us, and he was so proud of his work teaching children to become better citizens. I took care of the house, and worked here and there to make ends meet. We were happy.

On 14 March this year, everything changed.

We already knew bad weather was coming as we heard on the radio the news of the cyclone. But nothing could have prepared us for what happened. My husband called us just before it hit to ask how we were and to tell us to be safe. He was so concerned, but we told him we would take care. He said he would do the same and said he loved us. That was the last time we spoke.

At 10 pm it started raining. I can’t explain to you what it was like, but never in my life, nor in my parents’ and grandparents’ lives, had anyone seen rain like that. The water started to rise in our house and furniture was floating. I put my children on our kitchen table so they wouldn’t get wet and prayed as I was so afraid. I thought of my husband.

Everything I know about his fate comes from his colleagues and friends who were with him that night. They say the water started to rise in the school until it reached their necks and they had to swim to the roof. But soon the roof was also covered in water, and the current was strong. People had to swim to the closest trees and pray that the tree they reached would resist the winds and the water. My husband and many others climbed the wrong tree. It fell into the water and he was carried away in the currents. He had been clinging to the tree for many, many hours and had no more strength to swim. Many children from the school died in this way as their arms were weak.

The day after, many bodies washed up on the shore in Beira. After two days of no news from him, his brothers went to the beach to search among those bodies for my husband. They spent a whole day under the sun but never found him. Those who were found were the blessed ones, as their families had a chance to say goodbye – I never had this opportunity.

I spent two days in bed after what happened, unable to move or to do anything. My house was destroyed, my husband was gone, my life had changed entirely in one night. One morning it hit me – I was unemployed, alone, with three children. I had to fight. 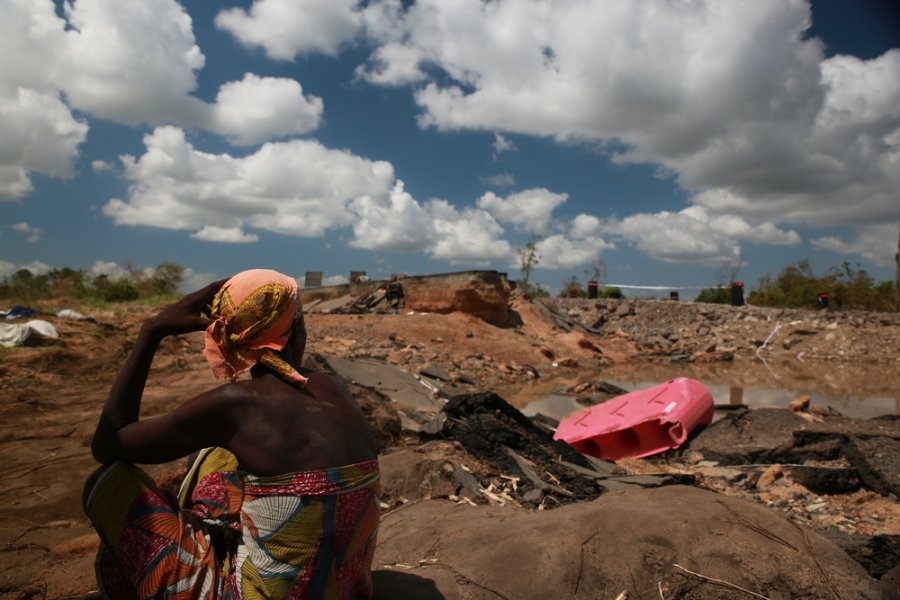 Mohammad Ghannam/MSF
Destructions of the road after cyclone Idai in Mozambique.

A lot of my strength to move on comes from being a nurse. A nurse has to be strong. We see sadness and pain every day, and it is our role in the world to support and treat. How can I cry when it is my job to comfort those who suffer? This tragedy has not only hit me or my home; so many around us have suffered and lost so much. I will never forget, but I will move on, not only for myself but for others.

My job in MSF takes me to places where people have lost much more than me, and makes me realise how this has affected my people. When those in your country watch the landscape from a helicopter, you see the flooded areas and the torn trees, but there is a lot you can’t see. Beneath the waters, below the broken branches, you will find us – our stories and our sadness and our resolve to live.

I still haven’t told my son that his father is dead. I can’t find the strength to do it, even if I try. He is so small. When he asks me to call his dad, I call one of his uncles and make him pretend to be his father. My dream is for my children to study and finish school. Sometimes I let myself dream of rebuilding our home, and maybe even adding a small shop to sell groceries to my neighbours. I hope my husband will be proud of what we become after he is gone.”