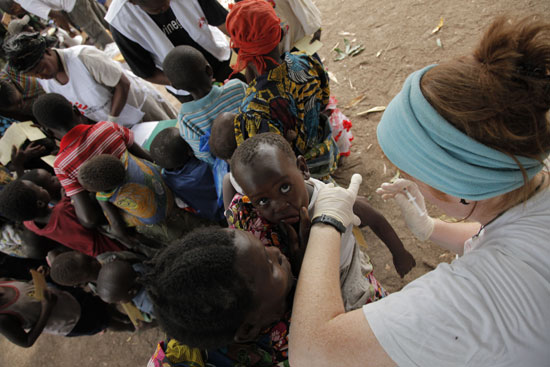 Democratic Republic of Congo: Alarm as Measles epidemic spirals 'out of control'

Over the past six months a measles epidemic has been sweeping through the Democratic Republic of Congo (DRC). Médecins Sans Frontières (MSF) is raising the alarm and calling for concerted action to halt the spread of the disease.

“The measles epidemic is spiralling out of control,” says Gaël Hankenne, MSF head of Mission in the DRC. “Since September 2010 we have vaccinated more than 1.5 million children in response to the crisis. But the disease is spreading like wildfire. All parties involved in health in the DRC must now make this epidemic a national priority.”

Over the past months MSF has provided a complete emergency response (treatment, vaccination and epidemiology) in Katanga, Kasaï Occidental and South-Kivu. New outbreaks have flared up in Bandundu, Kasaï Oriental and Maniema provinces, and the epidemic is rapidly moving north.

The treatment and vaccination needs are huge and the requirements in terms of human resources, finances and logistical capacity mean that MSF cannot be the only organisation providing a hands-on response throughout the entire country. “We are asking the Ministry of Health to launch a response immediately to outbreaks that occur in the other provinces or in any new health zone that is affected,” says Geza Harzi, MSF head of mission in Katanga.

“At the same time, we are asking international donors and institutions, and health organisations with activities in the DRC – particularly UN agencies (such as the WHO and UNICEF) and NGOs – to take action immediately. We request that they either release emergency funding or take hands-on action as part of the epidemic response. If this international response is not rapid, it will be impossible to check the spread of measles in the DRC.”

Measles is an extremely contagious disease that can cause medical complications such as pneumonia, malnutrition, severe dehydration, ear infections and eye infections that can lead to blindness. Mortality rates vary considerably depending on the context. When a population has not been vaccinated, measles can kill between 1 and 15 percent of afflicted children. Among vulnerable groups (such as people who have been displaced or are malnourished), the mortality rate can rise to 25 percent if people have limited healthcare, as is the case in many health zones in the DRC.

MSF is expanding its emergency response in three provinces: Tshikapa in Kasaï Occidental province, at Fizi in South-Kivu province and at Kolwezi and Likasi in Katanga province. More than a million children will be protected by these emergency vaccinations. “Since September 2010 we have counted more than 21,000 measles cases in the DRC,” says Hankenne. “Concerted action needs to happen right now.”