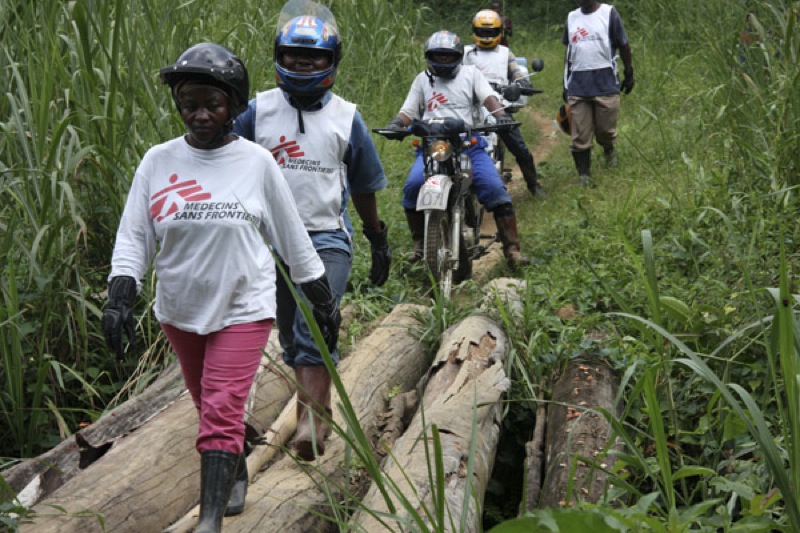 In North Kivu, in the east of the Democratic Republic of Congo violent conflict persists between government forces and an array of military groups. Around the town of Pinga, the frontlines between different armed actors constantly shift, and local people are trapped in the middle. Those displaced from their villages by the fighting hide in makeshift shelters in the forest, not knowing where the next danger will come from and often cut off from all medical care.

Tom de Kok is a project coordinator and has recently returned from North Kivu, “I met people whose villages had been burnt to the ground by one military group or another; they had run into the bush and were living with trees over the top of them and no mosquito nets.  The malaria – I’d never seen anything like it.”  Tom's first field mission for MSF was in Pakistan after the earthquake in 2005. Since then he has worked for MSF in Darfur and in Iraq and has completed two field missions in the Democratic Republic of Congo.

For some people around Pinga, even travelling to town for basic provisions is too dangerous, as they run the risk of robbery, extortion and harassment. “In one village I came across, people had no salt. We’re a medical organisation, but we can still barely imagine that people are desperate to get salt,” Tom says.

Huge health needs
In such an insecure and unstable environment, where many lack the most basic of necessities, people’s health needs are huge. Despite the enormous challenges of working in a conflict zone, across shifting frontlines, MSF is running a therapeutic feeding centre for malnourished children in Pinga town, supporting two health centres in the surrounding area, and running mobile clinics on motorbikes. MSF staff in Pinga carried out 40,000 consultations in 2010.

Continual conflict
“Most people – even old people – don’t know what it’s like to live without conflict, it has always been part of daily life. But still, the people who live in Pinga town have a far different experience from somebody who lives just five kilometres away, on the other side of the frontline. Whole villages are often burnt to the ground by non-government militias to deter nearby government forces from advancing and occupying them. When this happens, the villagers are forced to hide in the forest in makeshift shelters, without mosquito nets.”  explains Tom.

Trying to cross the frontline
To get medical care or reach the hospital in Pinga town, villagers “have to cross frontlines and land controlled by different military groups. They are accused by all sides of being sympathisers. If they follow the main road they’ll run into checkpoints. And if they take a back road through the woods, they’re going to run into the military – either government or non-government forces – and then they’ll be forced to explain why they’re travelling on the back road and it will look even more suspicious. When there’s all-out fighting, the military suspects everybody. These are serious cases: these are parents with a dying infant who has got malaria maybe with anaemic complications. They’ll move, they’ll get harassed, they’ll turn around and the result is their child won’t make it.”

Mobile clinic by motorbike
With so many people prevented from going to find a doctor, MSF’s mobile teams are crossing the frontlines themselves, and travelling on motorbikes into the dense bush to find the sick and traumatised people who are so desperately in need of help. “Road conditions are horrible; we do our mobile clinics with motorcycle convoys because cars can’t go there.”

Transferring patients
For many patients, on-the-spot treatment is not enough, and they need to be transferred to the nearest hospital, which may be across two frontlines and territory controlled by three different warring groups. In these cases, “the endeavour of trying to transfer a patient is about as lifesaving as the medical care itself. We cannot just transport sick patients on motorbikes for hours over rough terrain – children cannot hold on, neither can pregnant women. We fill out a referral form and try to get them to meet us at the checkpoint so we can cross together with them. We tell the armed men at checkpoints the names of those patients who will attempt to cross that day, and we tell them we will follow up on these people. But still, some never arrive at our clinics on the other side of the frontline.” MSF teams are trying to find ways around these difficulties.

Treating rape survivors
MSF also provides specialised medical care to women and girls who have been raped. Treatment includes post-exposure prophylaxis, which can help protect against the HIV virus and other sexually transmitted infections. Sexual violence is a terrible part of the war in eastern Congo that is perpetrated by military groups on all sides of the conflict. Many women are afraid to seek treatment because of fear of being stigmatised by their families. They also risk further harassment when attempting to cross military checkpoints in search of medical care. In 2010, the team provided specialised medical care to more than 200 women and girls who managed to reach MSF’s clinics against all the odds.

Maternal healthcare
Providing maternal healthcare is another major priority, as women living in the bush who suffer complications during pregnancy and childbirth have no access to doctors or trained midwives. In and around Pinga in 2010, MSF carried out 4,000 antenatal consultations and 65 babies were delivered within an MSF facility.

MSF’s added value
Despite the difficulties of travelling by motorbike on muddy jungle tracks, of being held up at checkpoints, of negotiating access across frontlines and having to deal with various armed groups, MSF is capable of working in these conditions. “Our reputation on the ground is better than good. We’ve got the maximum amount of space you could have under these difficult circumstances. We are still reaching people in need and our work is respected across the lines.”