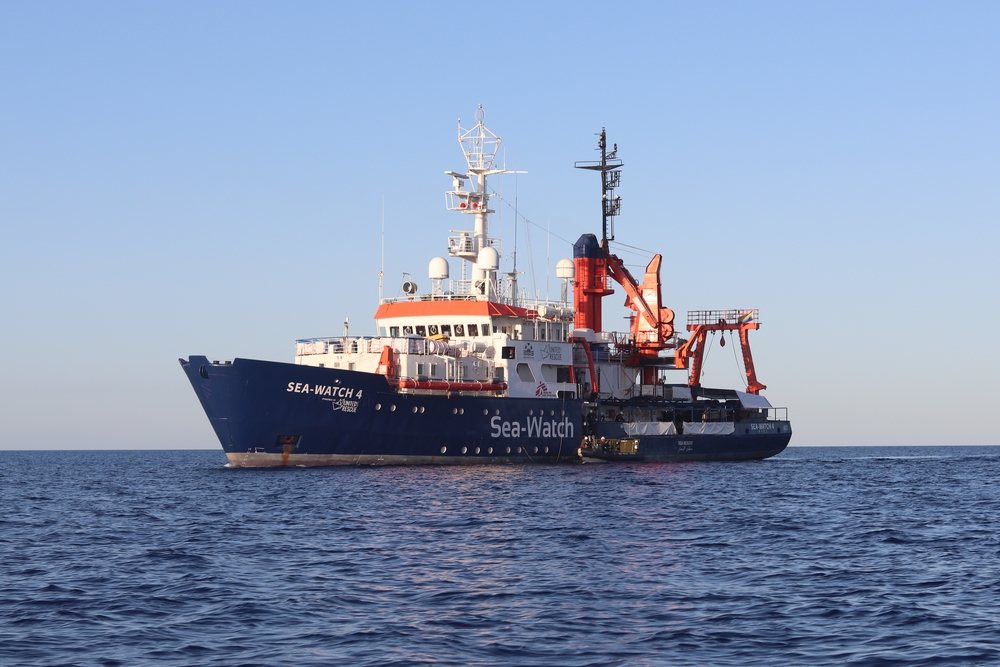 20 September 2020, Amsterdam/Palermo - Misuse of maritime law is providing a smoke-screen for a political decision to prevent rescue ships from saving lives in the Mediterranean, declares Médecins Sans Frontières, as the Sea-Watch 4 becomes the fifth NGO ship to be immobilised by Italian port authorities in less than five months. 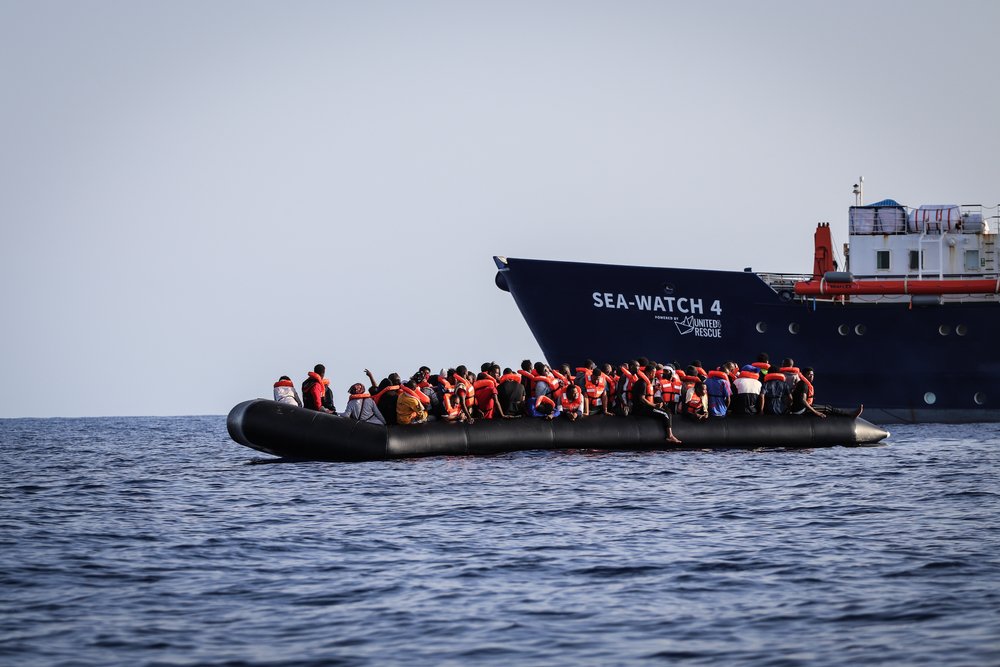 During its maiden lifesaving voyage, Sea-Watch 4 rescued 354 people. Among them were 227 men, as well as 98 unaccompanied teenagers, families, women travelling alone, people with disabilities, pregnant mothers and children the youngest less than two years old. 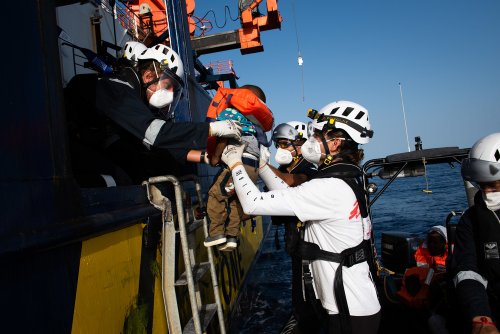 Chris Grodotzki/Sea-Watch.org
Securing lives at risk at sea, rescue crew distributed life vests, before bringing everyone safely on board. All survivors were triaged by MSF medics and assisted by the Sea-Watch protection team upon embarkation.

The MSF medical team on board provided 551 consultations, treating many people for fuel exposure and intoxication, caused by fumes from the petrol used to power the engines and the corrosive cocktail of saltwater mixed with gasoline.

One teenager sustained chemical burns so severe he had to be medically evacuated.

“The violent reality people have escaped, and the dangers of the journey they are forced to take in order to seek safety, was evidenced by the wounds we treated,” said Barbara Deck, MSF medical project coordinator on board.

“Yet, from the boy now deaf as result of a punch to the head by armed men, to the father who carries the scars of melted plastic branded on his skin while in Libya, the resilience we witnessed was humbling.

"As we treat our patients on board, it is devastating to know that European governments are doing everything they can to prevent these vulnerable people from being provided with this lifesaving care."

The decision by the Italian authorities to detain Sea-Watch 4 is all the more reprehensible given that the ship was instructed by the Maltese authorities to take on board more people from the search and rescue ship Louise Michel after it was forced to call for help while in the Maltese search and rescue region. At the same time Italian coast guard vessels were on scene and evacuated 50 vulnerable people from the over 200 people onboard. 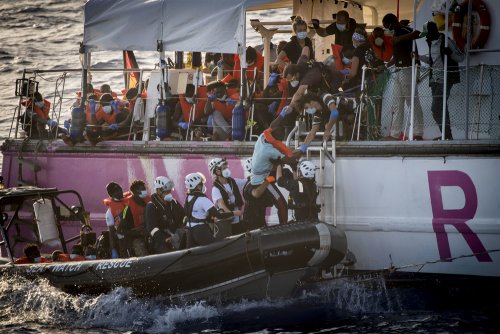 Sea Watch 4 has altered course toward MV Louise Michel, the ship had a number of rescued people over its capacity.

The Sea-Watch 4 is only at sea because of the absence of state-led search and rescue capacity at the world’s deadliest sea border.

MSF and other NGOs are simply trying to fill the deadly gap left by European states.August registered the highest number of fatalities in the central Mediterranean so far this year, with 111 people reported dead or missing.

In the most recent shipwreck off the Libyan coast on 15 September, over 20 people were reported missing presumed dead and in another shipwreck on 17 August, 45 migrants and refugees died bringing the overall total for this year to 379.

We are accused of “systematically” saving people

"Once a rescue ship enters an Italian port, it is subjected to a lengthy and overzealous inspection until some insignificant irregularities are found. It took 11 hours of inspection on the Sea-Watch 4 yesterday to come up with sufficient infractions to prevent the ship from sailing out of the port of Palermo,” said Ellen van der Velden, MSF operational manager for Search and Rescue.

"Legitimate maritime procedures are being manipulated and abused by Italian authorities. Inspections of NGO vessels have become a way to block search and rescue efforts"

"We are accused of “systematically” saving people,criticised for having too many life jackets on board and scrutinised over the sewage system. Meanwhile the obligation for every ship to provide assistance to boats in distress is completely disregarded. 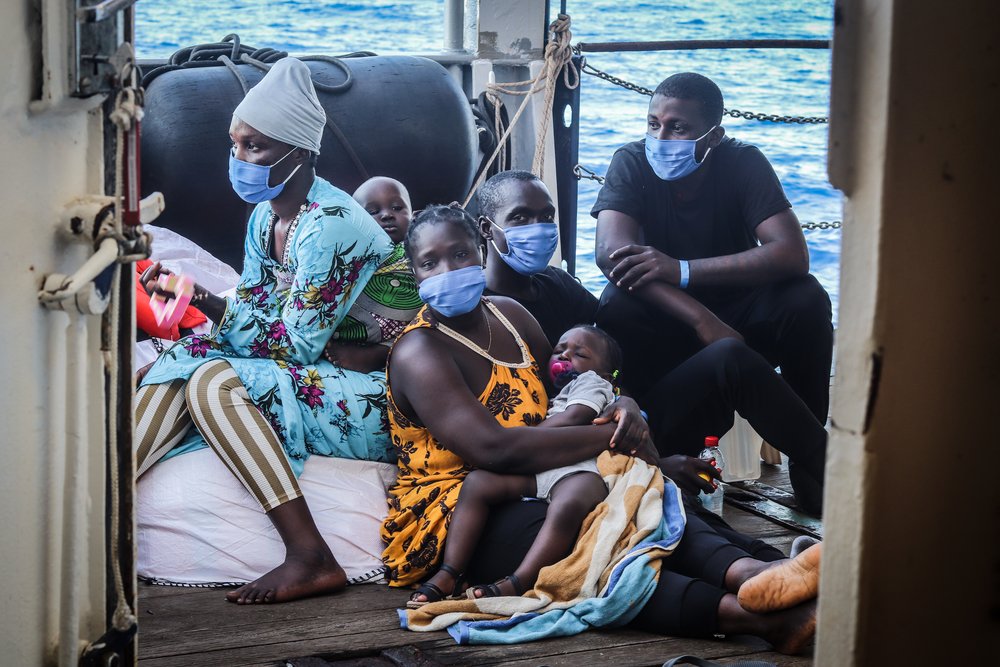 MSF/Hannah Wallace Bowman
Life on board.

This is the Italian authorities playing dirty, attempting to incriminate and stop humanitarian organisations who are doing nothing more than trying to save lives at sea as per international maritime law, while tearing up the rule-book on their own obligations, chiefly to provide assistance to boats in distress. And this with the assent, if not full endorsement, of European states,” added van der Velden.

Not only are European states are failing to provide search and rescue capacity, but they have co-opted the Libyan coast guard to police the Central Mediterranean. Since the beginning of 2020, almost 8,000 refugees and migrants have been intercepted at sea and forced back to Libya - a 32 per cent increase in comparison with the same period last year as the number of people held in official detention centres in the country continues to grow. Despite the fact that we know Libya is not a safe place.

Preventing rescues at sea to trap, push back & abandon people

Across the Mediterranean, from preventing rescues at sea to purposely holding people in  Moria refugee camp, the EUs current approach to migration is to systematically trap, push back and abandon people; whether that is leaving them to die at sea or trapping thousands of men, women and children in appalling conditions in camps on the Greek islands. 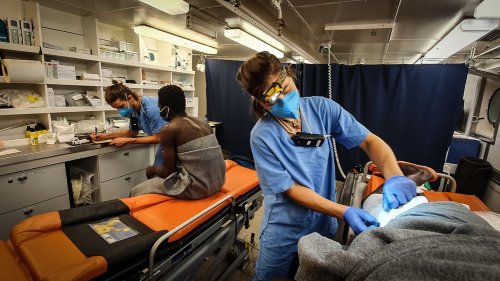 MSF/Hannah Wallace Bowman
Sea Watch 4 has altered course toward MV Louise Michel, the ship had a number of rescued people over its capacity.

As the European Union heralds its new pact on migration set to be launched on 23 September, organisations such as MSF are dealing with the human cost of such inhumane policies.

This latest move by the Italian authorities suggests this pact will manifest more of the same, casting a shadow on the pledge even before it is made public.

EU member states are disregarding their legal and moral duty to save lives, opting instead to impose abusively bureaucratic and administrative measures on yet another lifesaving ship. A decision to further decimate already limited search and rescue capacity in the central Mediterranean will have devastating consequences for those in desperate need of assistance and inevitably result in more lives lost. Sea-Watch 4 must urgently be released so that it can recommence life-saving search and rescue in the Central Mediterranean and the ongoing attacks on NGO’s trying to provide assistance to desperate people must stop.

Sea-Watch 4 is the fifth ship to be detained by Italian authorities in the last five months. After each one of the ships was subjected to a Port State Control, the Italian coast guard announced it had discovered “irregularities of a technical and operational nature to the extent that they risk compromising not only the safety of the crew but also of those who have been or could be rescued” on all five ships. 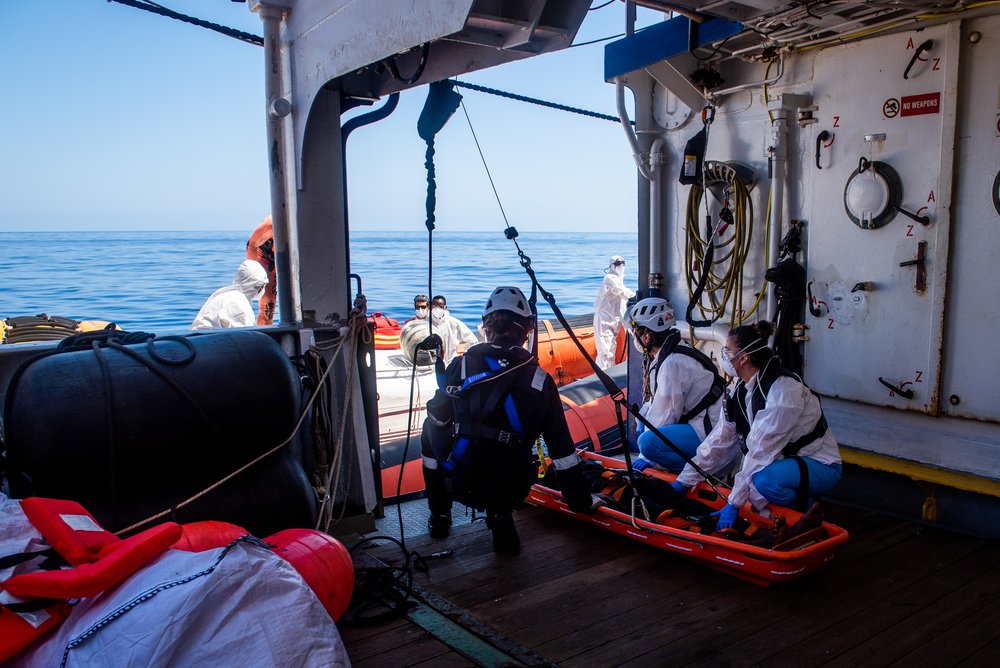 A teenage boy was evacuated from SeaWatch4 for fuel burns, caused by exposure to gasoline & salt water in the boat he was rescued from 2 days ago. MSF stabilised the patient, but the severity of his condition exceeded capacity of emergency facilities on board.

On 5 May, the German-flagged ship Alan Kurdi operated by Sea-Eye was the first one this year to be detained at the port of Palermo in Sicily after the ship completed a mandatory quarantine following the disembarkation of 150 rescued people in Sicily. On 6 May, the Spanish-flagged Aita Mari operated by Salvamento Marítimo Humanitario was also detained, followed by the detaining of Sea-Watch 3 in the port of Porto Empedocle on 8 July.

On 22 July, Ocean Viking of SOS mediterranee was also detained in Porto Empedocle after an 11-hour Port State Control. Another rescue vessel, the Iuventa operated by the German aid group Jugend Rettet was detained by Italian authorities in August 2017, after it was accused of “facilitating the irregular entry” of migrants into Italy and is still blocked.

The detainment of Sea-Watch 4 is just the latest blow in a campaign of criminalisation against search and rescue NGOs. Amid accusations of colluding with smugglers, criminal investigations and judicial proceedings against MSF, (including on way it managed waste on board) in 2018 the organisation had to stop its search and rescue operations on board the Aquarius, a ship operated in partnership with SOS MEDITERRANEE, after it lost its flag twice in two months at the instigation of Italian authorities.

Such decision was the result of a sustained campaign, spearheaded by the Italian government and backed by other European states, to delegitimise, slander and obstruct aid organisations providing assistance to vulnerable people.