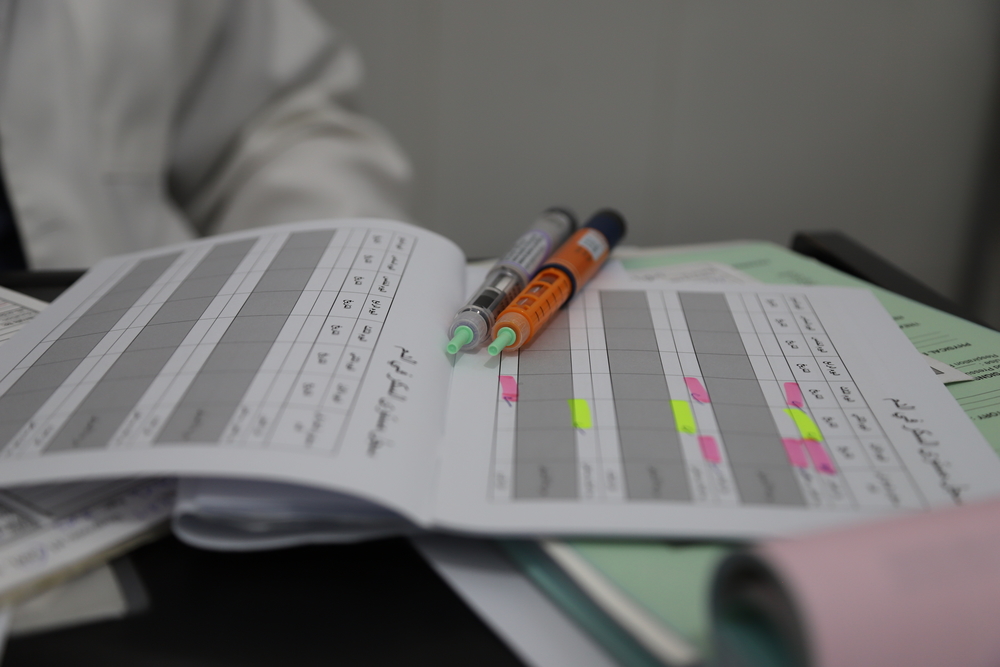 Diabetes: 100 years after the discovery of insulin, governments and health leaders have a crucial opportunity to support a new global resolution on diabetes and insulin access

MSF calls for ambitious targets for diagnosis, treatment and control of diabetes, in line with the 90-90-90 targets for HIV, and transparency on insulin pricing to ensure affordable access.

Geneva, 12 May 2021 – As a new global resolution on “Diabetes prevention and management, including access to insulin,” undergoes negotiations this week ahead of the World Health Assembly, Médecins Sans Frontières/Doctors Without Borders (MSF) today welcomed the discussions on the resolution, and called on all countries to strongly support this critical opportunity to boost access to treatment for people living with diabetes everywhere.

MSF urged governments and health leaders to set global targets for diabetes reflecting the 90-90-90 goals used in the global HIV response, to facilitate access to diagnosis, treatment, and ensure control of the disease; and ensure transparency of pricing of all types of insulin and the bundle of medical supplies required to inject and monitor this lifesaving treatment.

Focusing on prevention and treatment

The negotiations on the resolution, proposed by Russia, are ongoing and expected to end by 14 May, followed by a formal presentation of this resolution at the World Health Assembly, 24 May to 1 June.

The resolution focuses on prevention and treatment, including access to insulin, and aims to ensure that availability of insulin becomes an integral part of all countries’ national strategic policies for diabetes. 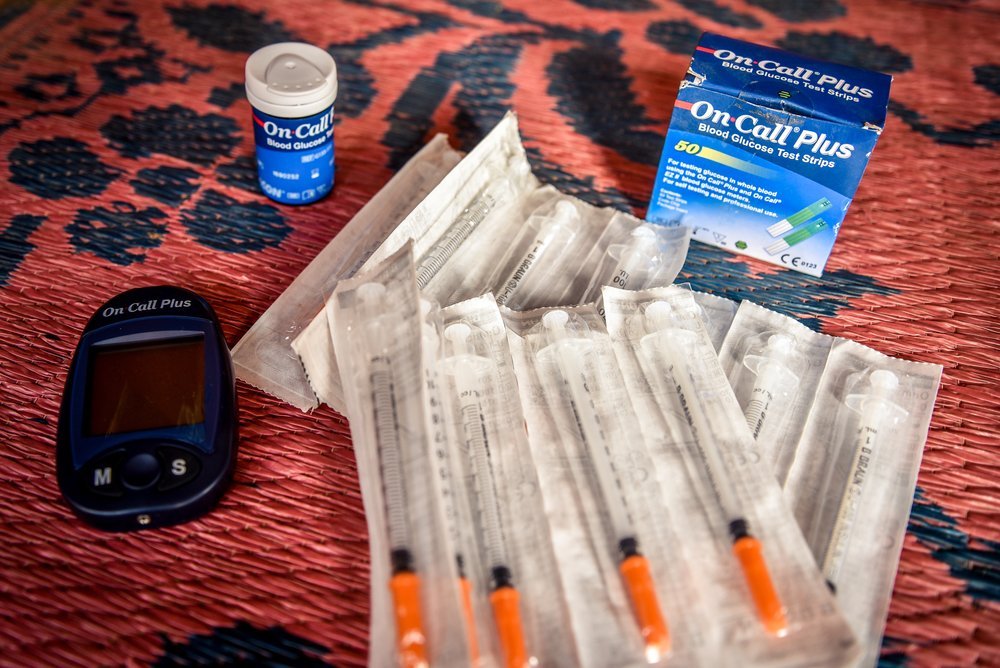 Paul Odongo/MSF
A treatment kit for patients with type 1 diabetes including a glucometer and glucometer strips, needles, insulin among others.

It also seeks to establish a mechanism for holding all countries accountable for reporting on global targets for the diagnosis, treatment and control of diabetes to demonstrate an increase in access to diagnosis and treatment for diabetes.

"Diabetes is a chronic, progressive disease that can be controlled with effective treatment and affects nearly half a billion people worldwide"

MSF calls for setting global targets for diagnosing, treating and controlling diabetes in line with the 90-90-90 target established for HIV/AIDS, which has been successful in driving healthcare workers, national programmes and donors towards these goals for diagnosis, treatment and control of HIV.

The targets need to be disaggregated for both type 1 and type 2 diabetes to ensure that the needs of people living with type 1 diabetes, where access to insulin is a matter of life or death, are not neglected.

“The tools to manage diabetes have existed for decades, but access remains a huge challenge in the absence of political will,” said Dr Helen Bygrave, Chronic Diseases Advisor for MSF’s Access Campaign.

"It is indefensible that half of adults with diabetes remain undiagnosed, and only half of people requiring insulin treatment have access to it"

"Taking cues from the momentum gained through the 90-90-90 targets in HIV treatment programmes, it is time for governments to set similar ambitious global targets to improve access to diagnosis and treatment of diabetes for all, and control of the disease in order to prevent the serious complications that we see in many people today.”

This year is the centenary of the discovery of insulin – the scientists who discovered it 100 years ago sold the original patent for one dollar, with the intention of ensuring universal access.

Yet, for people requiring insulin, a combination of factors, including high prices, contribute to preventing access to treatment. 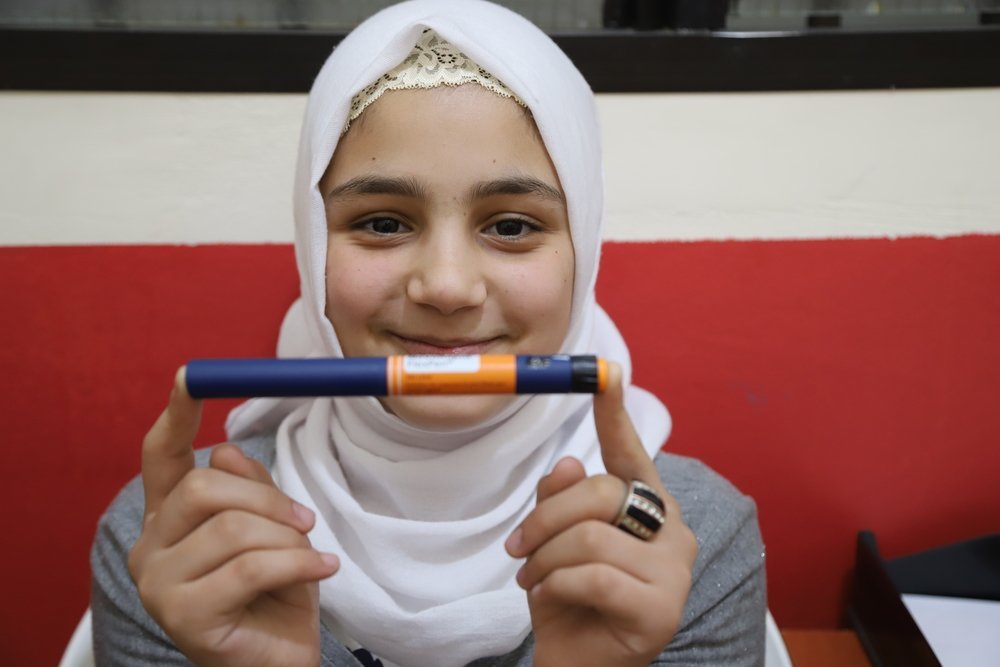 Jinane Saad/MSF
Sidra is a 12 year old affected by diabetes type I. She was admitted to Médecins Sans Frontières’ clinic (MSF) in Shatila Camp, South Beirut, where she is provided with insulin pens.

Actual prices vary significantly among countries and health sectors and are often not publicly known; corporate pricing practices are opaque and difficult to understand.

According to a 2017 study, the median government procurement prices of different types of human and analogue insulin in 10mL vials were between $6 and $34.

In non-communicable disease (NCD) programmes, insulin ranks among the top five most expensive medicines and has been an issue when considering the number of people MSF is able to treat.

A chronic and progressive disease

“Without insulin, people living with type 1 diabetes will be extremely ill and die within days to weeks,” said Dr Abdulmalik Wanyama, Hospital Director for MSF’s Dgahaley Project in Kenya.

“We witness this often in our projects, where patients arrive in our emergency rooms simply because they are unable to access insulin on time, or had to end up rationing its use."

"We really hope this resolution prioritises transparency in the pricing of insulin and the bundle of medical supplies required to inject it and monitor blood glucose levels. This is vital for supporting low- and middle-income countries in planning and implementing diabetes treatment programmes.”

Diabetes is a chronic, progressive disease that can be controlled with effective treatment and affects nearly half a billion people worldwide.

"It is estimated that by 2045 the number of people with diabetes will rise globally by 51%, with the largest increase predicted in Africa (143%)"

While the probability of premature deaths from any of the other four main NCDs, including cardiovascular diseases, cancers and chronic respiratory diseases, has decreased by 18% globally between 2000-2016, the risk of premature death from diabetes showed a 5% increase during the same period.

“Having a specific resolution on diabetes in the centenary year of the discovery of insulin would not only signal political commitment to treat this disease but would also lay the foundation to prevent the further escalation of complications such as cardio-vascular and renal disease, and reduce the impact of COVID-19 on this vulnerable population,” said Bygrave.