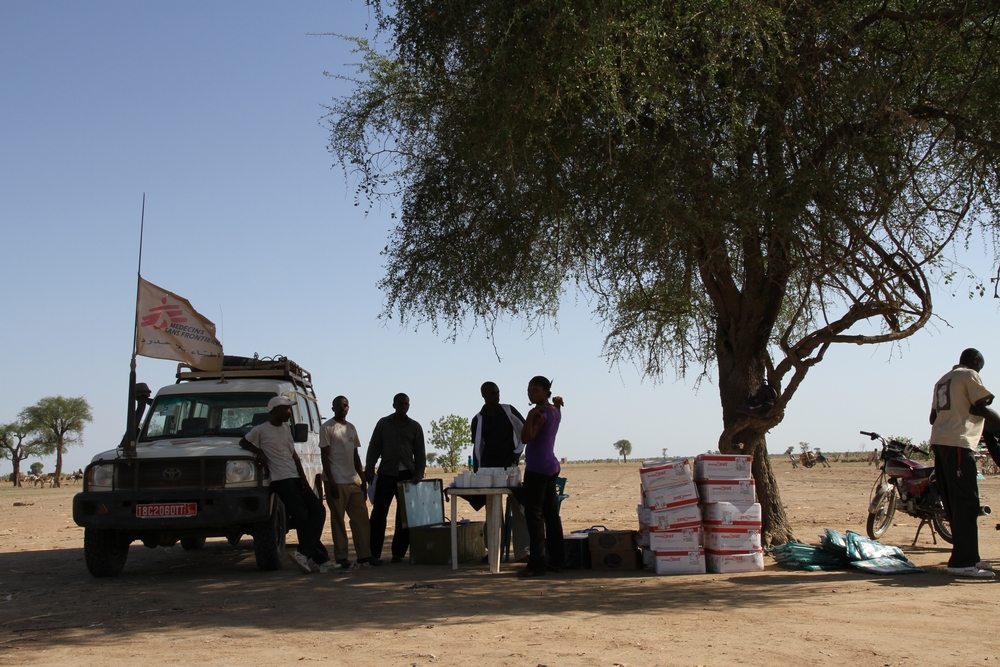 From the dispensary to Chad - Louise Keane in 'Irish Pharmacist'

In 2013, pharmacist Louise Keane made the difficult decision to take a break from her coveted role as a hospital pharmacist and give nine months of her life to helping to improve the lives of some of the world’s poorest people in Chad.

Having spent 20 years working in pharmacy, 10 of which were spent working within the Defence Forces, Keane had always had it in the back of her mind that someday she would love to contribute overseas and last year took the plunge to make it a reality. “Working overseas would have always been something in the back of my mind, but sometimes when you are running

along on the treadmill, it is easier to just keep going. I had spent ten years in the army and had tried to get overseas, but pharmacists rarely had the opportunity to go on things like that and so it didn’t happen, but I think the idea stayed at the back of my mind until it reached a point where I just said, ok, I’m going to try to do this now,” explains Keane.

In November 2012, the Tralee pharmacist started looking at what options she had for working on a mission overseas and subsequently applied to work with Médecins Sans Frontières (MSF). Much to her surprise she was interviewed for a role in January 2013, accepted for her first project in March and flew out to Chad for her first mission in May of the same year, becoming the second Irish pharmacist to work overseas with MSF.

Although Keane was always anxious to work overseas, she admits that departing Irish soil for Chad last May was ‘scary as hell.’ “As this was my first mission, I was pretty green and you do go with your own preconceived notions of what things will be like, but you just don’t really know. MSF try to prepare you before you go and I took part in a week-long course in Europe with other medical and logistical staff where they try to give you scenarios about what life will be like,” she explains.

Despite all the preparations and training however, Keane said that it was only when she was in Chad that she got a real insight into just how different life was there.

“Security was a big thing. While things were quite calm when I was there you absolutely had to have a security plan and you couldn’t go two minutes down the road without radioing someone to tell them where you are. When travelling you would always need to travel in a convoy of two and radio regularly to let people know you were ok. You know that you just can’t go anywhere by yourself,” she explained.

Living conditions were also very different for Keane who says that while they were lucky to have water and electricity a lot of the time at the camp, the conditions were basic and a big culture shock to those used to toilets and warm showers. “Everything was concrete and we had drop toilets.

We were very lucky to have two showers in the camp, which ran water from overhead and were a very big deal.

You had your own room most of the time, but often shared it with lizards and frogs, which I didn’t mind, but also rats. I didn’t like the rats. We had luxuries though and in the evening I would often watch a DVD on my laptop.

We were also very lucky in that we managed to get Internet in the new pharmacy and I was even able to Skype home a few times which was a real luxury, but also helped everyone at home to know you were ok,” she said.

Keane’s role in Chad involved the set-up of a new pharmacy, which would amalgamate work from three other pharmacy locations.

Here, she was responsible for putting systems in place to ensure the smooth running of the pharmacy into the future.

While this might seem like a challenging task even in the best of environments, setting up a pharmacy in Chad brought a whole new set of mammoth demands with it.

“Getting drugs on a shelf wasn’t easy and you weren’t going to be putting in your order in the morning and getting it in the afternoon like here. MSF do not source medicines locally because of the risk of counterfeit drugs and so everything you needed had to be shipped from Europe and stock is ordered just twice a year,’ she explained.

To ensure there is no wastage or overstock, Keane explained that MSF have a list of essential medicines, which is refined for each project depending on the needs of that location, and as the main focus in Chad was on child and maternal health, their drug supply was based around this.

“You had the medicines you needed for the programme you were running and dispensing is quite methodically done so there is no wastage. Every month you would track what is being used and give feedback to prescribers, especially, for example if a lot of a certain drug was being used you would ask why so that you could forecast if there was an outbreak or you would need emergency supplies and then you would work out your forecasted monthly consumption (FMC). In points

I felt more like a forensic accountant than a pharmacist.” said Keane. A simple thing like keeping stock cool was also a mammoth task.

“One of the highlights for us in the new pharmacy was that we got a fridge for the pharmacy. Previously fridge stock had to be kept in cool boxes with ice packs and these ice packs had to be changed three times a week and you would have to drive 20 minutes to do so,” she said.

While in Chad, Keane experienced first hand just what happens when there is an epidemic. “While I was there, there was a malaria epidemic. The FMCs were just not right and an emergency response had to be initiated. We all know about malaria, but seeing it was something else. People were dying. Children were dying. The whole place was torn apart from it.

“Seeing how MSF responded in an emergency was an experience as this is what they do best. Mobile clinics were brought over to respond to those who couldn’t access treatment,” she explained.

The thing that struck Keane most while she was in Chad though was not the conditions, the security fears, the poverty or the illness but the unwavering warmth in the people she met. “Since I’ve come home, I have to say I have missed the warmth in people. Here people seem sullen by comparison. In Chad people were smiling all the time. There’s a huge problem with malnutrition there and women in particular have such a difficult time there and yet the people I met were so friendly and warm.

The people I worked with would shake your hand every morning, even though they saw you the day before and would ask how you are, how your family are. It was a privilege to work with these people,” she said.

Keane returned to Ireland in January and admits that she had a lot of big decisions to make, but after much soul searching and discussions, she has decided that she has more to give and is about to take up a nine month post with MSF in Amsterdam as a procurement pharmacist where she will be involved in efforts to source, store and ship medicines necessary for MSF to carry out its missions.

Asked if she would recommend working with MSF to other pharmacists, Keane said she is extremely glad that she took the plunge to join MSF and that she would definitely recommend the experience to others, but said anyone thinking of getting involved should do as much research as they can before they go.

“I am so glad I did it, but I would say do your research, look at things like the MSF video blogs which give you an idea of what working and living conditions are like, talk to someone who has been there and if it is still something you want to do then definitely pursue it.”