“Do we have a future?” One year after the Beirut blast, situation in Lebanon has got much worse

Lebanon has been in a state of emergency since late-2019, rocked by economic crisis, political instability and social tensions, and hit hard by the COVID-19 pandemic. On top of these came the devastating explosion which rocked Beirut on 4 August 2020. One year later, people are in increasing need of humanitarian aid.

Half of Lebanon’s population live in extreme poverty, with many barely able to afford food or medicine. Fawziyya Al-Sahili is one of them Fawziyya Al-Sahili stands in her kitchen in north-eastern Lebanon stirring a vegetable stew. “My neighbours brought me this meal yesterday, otherwise we wouldn't have any fresh vegetables,” she says. “We haven't eaten meat for a year. With my son's salary we can only afford bread, beans and lentils. That's the way it is now.” 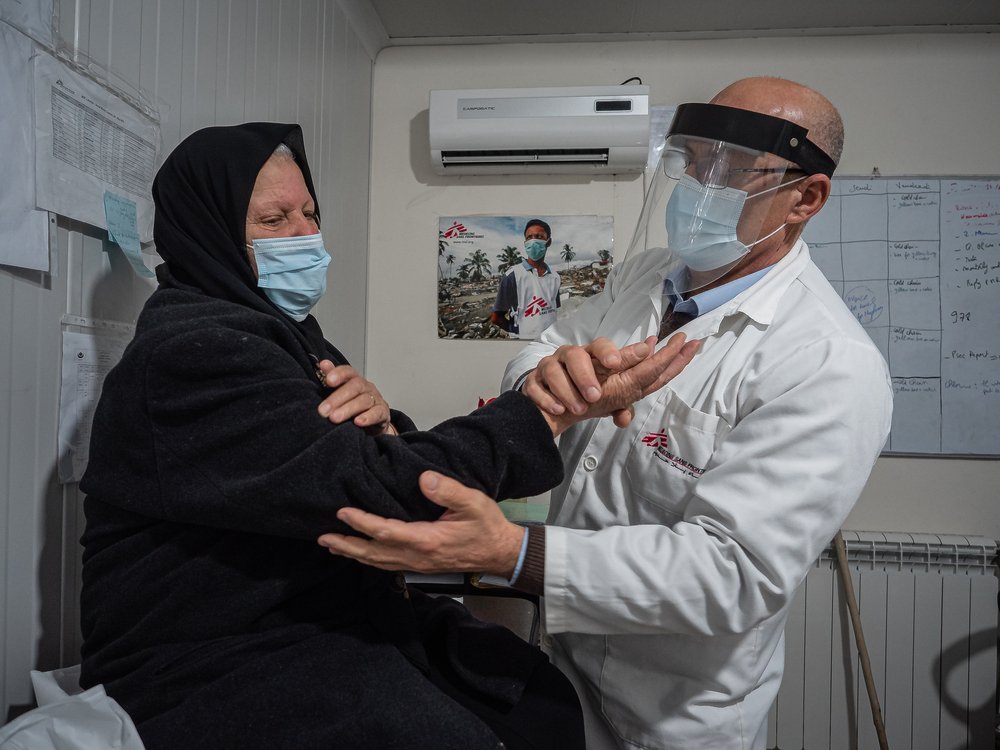 Tariq Keblaoui
Fawziyya Al-Sahili, 64, suffers from high blood pressure, diabetes (and osteoporosis). She regularly visits the MSF clinic in Hermel where she is examined and given the right medication. Her family is suffering from the economic crisis.The fridge is empty. Neighbors and family help out and send food or other important items. Bulgur, beans and lentils are mostly eaten. Meat and fruit hadn't been around for over a year.

The 64 year old woman has high blood pressure and diabetes, and needs to eat a healthy diet with lots of fruits and vegetables. But these foods are often out of reach for her and her family. One of her sons works in a shop where he earns 10,000 Lebanese pounds each day – less than US$1 at today’s informal exchange rate. Her other son is unemployed. The three of them live together in an unfinished house that they can’t afford to complete.

For the past two years she visits MSF’s clinic near her house in the north Lebanese town of Hermel, for regular check-ups and to collect the medications and insulin she needs for her treatment.

Fawziyya and her family are part of the half of Lebanon's population now living in extreme poverty. Since 2019, this small country on the eastern coast of the Mediterranean has been hit hard by an economic crisis, rising inflation, political instability, and COVID-19 pandemic. On top of all these came the explosion which rocked the capital, Beirut, on 4 August 2020. 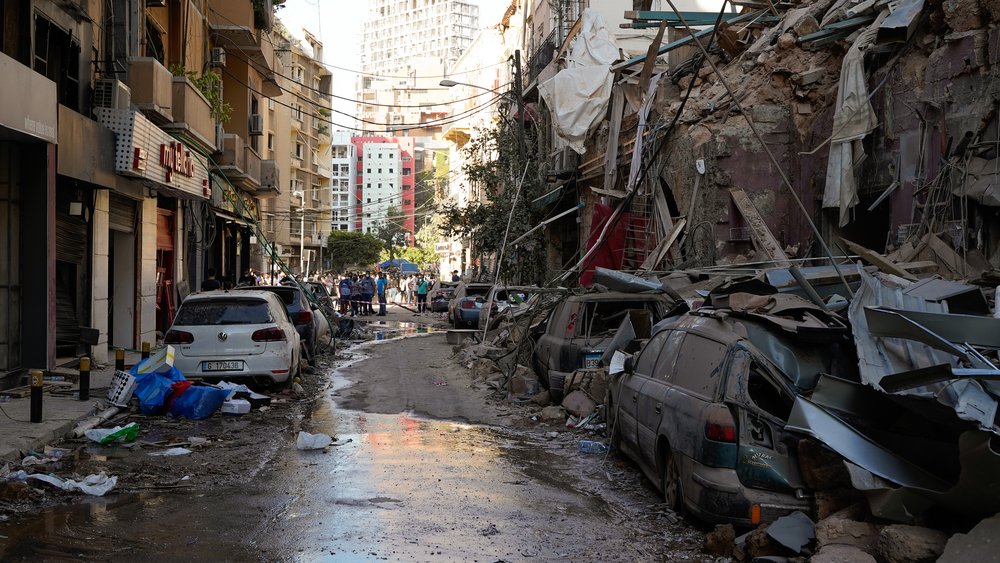 Mohamad Cheblak/MSF
Severely damaged building in the historic neighborhood of Gemmaye in Beirut. Thousands of apartments and shops in Beirut were damaged due to the explosion which caused shattering to the glass windows and wooden doors. Beirut's streets were covered by debris and broken glass.

The huge explosion in the port area had devastating effects: close to 200 people were killed, more than 6,000 were injured and tens of thousands lost their homes. It also destroyed a number of public facilities, including hospitals, and badly damaged the central warehouse of the health authority, disrupting access to medicines, especially for elderly people and patients with chronic diseases.

In the wake of the explosion, MSF teams donated first aid kits to the Lebanese civil defense and medical supplies and masks to the Lebanese Red Cross. MSF teams in three locations – Karantina, Mar Mkhayel and Khandak – treated more than 1,800 patients with wounds caused by the blast and 4,500 patients with chronic diseases who needed medical support. 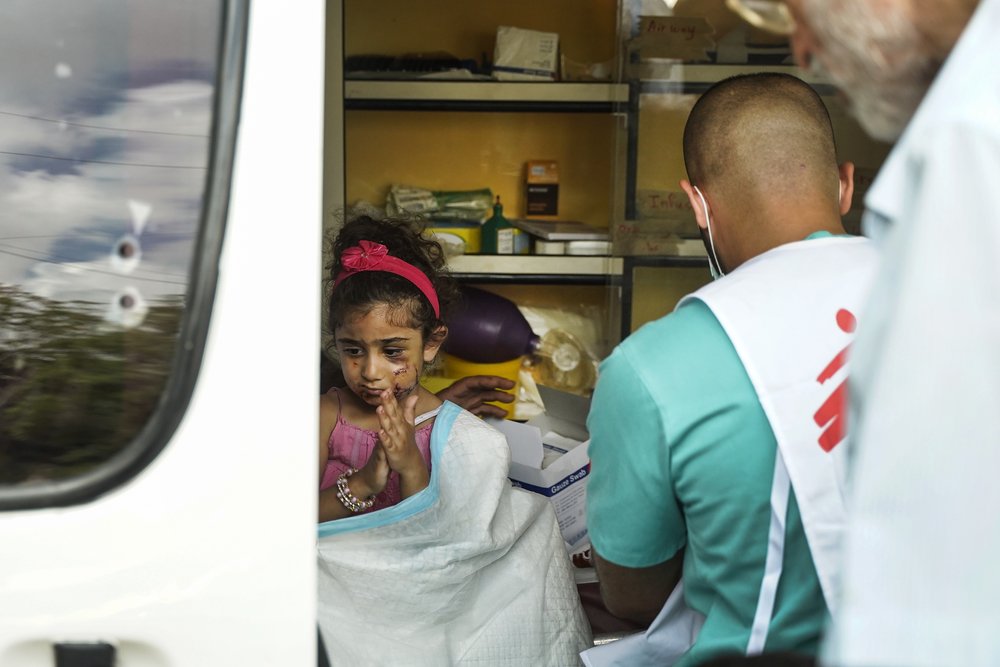 Mohamad Cheblak/MSF
Samar is 3 years old. She came with her father to the MSF medical point to receive wound care. Samar was going with her father out of their building on the day of the explosion and the steal gate caused her facial injuries and burns. She already had reconstructive plastic surgery.

In the weeks following the explosion, several public hospitals were almost at capacity due to high numbers of patients with COVID-19. People injured in the explosion rushed to reach hospitals without taking preventative measures, as coronavirus was the least of their worries.

With numbers of COVID-19 patients rocketing, Lebanon was put under lockdown for several weeks. Even before the pandemic, the public health system faced regular bottlenecks in drugs and medical supplies as a result of the economic crisis. Post-pandemic, the situation grew even worse.

One year after the Beirut explosion the people’s need for medical and psychological help is still enormous. At the same time, a visit to the doctor has become a luxury for many people due to the cost of private healthcare. “The health system in Lebanon is highly privatized so more and more people cannot afford medication or see a doctor,” says Hammoud al-Shall, MSF assistant project coordinator. “People have to decide whether to spend their money on food or drugs. The prices of both are up to five times what they used to be."

'I wanted to buy paracetamol, but the pharmacist didn't have it. We tried three other pharmacies, but it was nowhere to be found.The drug is no longer available n Lebanon.

Fawziyya needed pain medication but found it impossible even to get hold of even the most basic drugs, like paracetamol “I fell and then I had such a headache,” she says. “I wanted to buy paracetamol, but the pharmacist didn't have it. We tried three other pharmacies, but it was nowhere to be found. The drug is no longer available in Lebanon.”

Such shortages of medications are challenging, even for organisations like MSF. It is difficult for local companies to import medicines into the country, so MSF teams now import the most essential ones themselves. The escalating fuel crisis has increased transportation costs, affecting both stocks of medical supplies and patients trying to reach medical care.

Many people in Lebanon – both Lebanese and refugees – already struggle with stress and psychological trauma connected with war or displacement. Now, deteriorating living conditions are proving an additional burden and impacting their mental health. Numerous patients who seek psychological help from MSF suffer from depression, anxiety or despair. 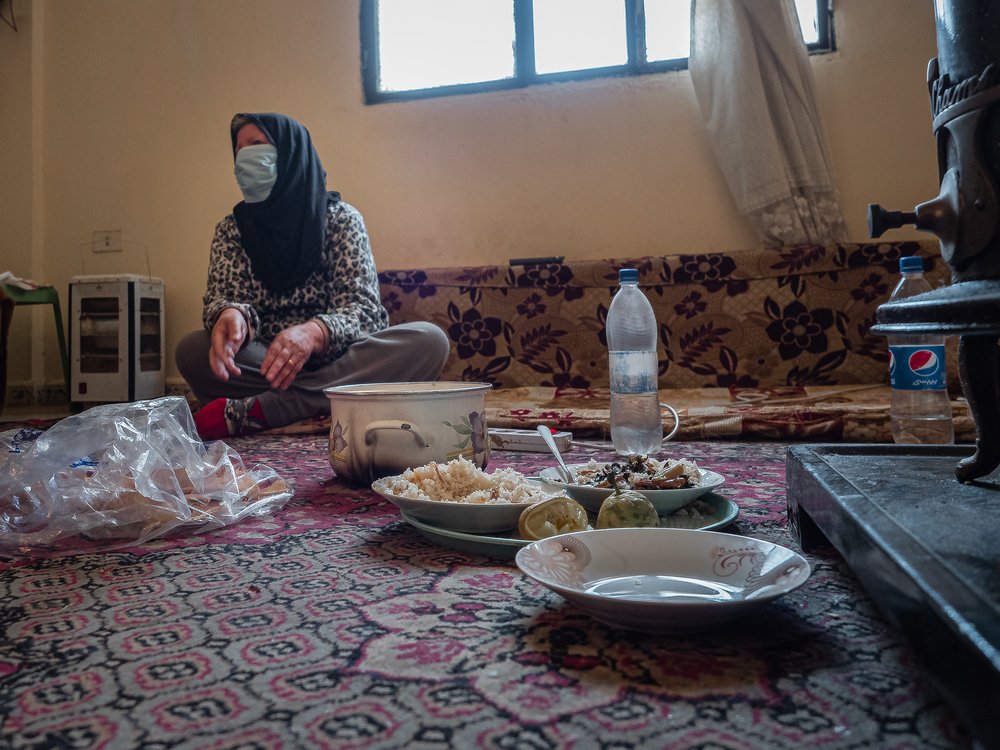 Tariq Keblaoui
Fawziyya has seen many crises in Lebanon. Despite the really difficult situation at the moment, she has hope that one day things will improve again. Sticking together and being patient is her motto. She is grateful for the aid she receives via the MSF clinic.

Fawziyya Al-Sahili worries about her family’s future. She’s particularly concerned about her son who is out of work. He also attends MSF’s clinic in Hermel, where he receives psychosocial support.

The meal now ready, Fawziyya sits on the carpet with plates of rice, white bread, and vegetable stew in front of her. Her anxiety about the future is ever-present, but she has not lost all hope yet. There is solidarity amongst the Lebanese people and she feels supported by her community – not just the neighbours who bring her food, but the social workers and t doctors in MSF’s clinic where her family gets the free medical, psychosocial care and medications they need.