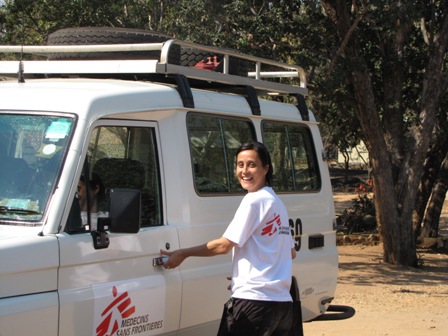 While most doctors in Ireland rarely see patients die, Dr Sarah Taaffe, 31, endures the awful anguish of losing one of her tiny charges on average three times a week.

This article appeared in the Sunday Independent on 08.08.10.  The full text can be viewed on the Irish Independent website

It is the most depressing aspect of her work, but seeing so many other children come back from the brink makes her task rewarding.

Sarah, who grew up in Skerries, is one of those rare, unselfishly focused people who truly makes a difference on this planet. As a child she had wanted to be a vet but, following a harrowing programme on the Ethiopian famine, she decided to become a doctor. "When I saw the faces of the children and the hopelessness of the mothers, I thought that it was not right."

Following years of study, Sarah did her internship at Dublin and Drogheda. Subsequently she practised paediatrics for six years and worked in the National Maternity Hospital, Our Lady's Children's Hospital, and in Temple Street -- "the best hospital in the world". She also spent six months in Uganda working with HIV-positive children and three months studying tropical medicine in Peru.

Sarah got a taste for Africa when she was just 18, volunteering at an orphanage in Khayelitsha near Cape Town. "We did educational workshops and I just loved it. I kept going back during the holidays," she says.

Then, last March, this determined young woman packed her bags and headed for Zimbabwe to begin to fully realise her ambitions.

Working for Medecins Sans Frontieres (MSF) -- Doctors Without Borders -- Sarah is based in Bulawayo, Zimbabwe's second largest city, where she works alongside 63 nationals and five expats. She is the only Irish person on the staff.

"We work to a set schedule, which can actually be quite unpredictable," she says. "The main hospital has a 220-bed paediatric section. I do ward rounds then I go to the clinic."

The majority of the cases Sarah sees are HIV/Aids related. "At the moment 1.3 million of a population of 13 million is HIV positive," she explains. "That is one of the highest prevalences in the world."

According to the World Health Organisation (WHO), as of December 2008, some 33.4 million people worldwide were infected with HIV. There were 2.7 million new infections, while two million people died of the pandemic in that year. Two-thirds of cases occurred in sub-Saharan Africa. Tuberculosis (TB) was the main cause of death among people with advanced HIV.

She says they are heartened by the fact that the government is "scaling up" access to ARVs and other HIV medications.

"We have lots of challenges," she says. "There is a unilateral goal to deliver the medication to the patients -- in this, everyone is on the same page."

Sarah says their work is performed within the Zimbabwean state system. "We have a team of doctors, nurses, counsellors, educators and communicators. Collectively, we work towards delivering a service that attends to the needs of the patients," she says.

She explains that they also have teams of educators who, through educational programmes about HIV, help overcome the stigma of the disease.

Reducing that stigma is a crucial step toward the goal of increasing the number of people who are aware of their medical status, in addition to preventing further infections by encouraging safe sex and lessening the chances of mother-to-baby infection. Sarah says that while most HIV-positive children get the virus from their mothers, that risk can be greatly reduced.

"We promote breastfeeding. Without access to clean water, formula feeding is not safe," Sarah explains. "In conjunction with the right medical treatment, many babies are born HIV-free. To see the face of a [HIV-positive] mother who hears that news [that her baby is virus-free] is one of the best feelings in the world. Then you can directly see the impact that we are having."

Sarah and her colleagues face innumerable issues in dealing with the pandemic, not least of these being the problems of food provision. "Often the head of the family falls sick with HIV and can't work. That affects food security, which leads to malnutrition, which makes their children more vulnerable to infection such as TB. It becomes a vicious cycle," she says. "We're seeing patients from a medical point of view, but HIV trickles into every area of society and we track it."

Sarah says that despite their best efforts they lose about three babies and children each week. "Because we have so many patients, the ones doing well are seen by the nurses," she explains. "So I see the really sick ones -- those who are badly malnourished and not growing. Some days we have 50. It's so hard to see children dying. It's always wrong. What stays with me are their big eyes and the fact that they are expressionless and so quiet. That's so unnatural for a toddler. It really, really upsets me. The best way to manage HIV is to prevent it, to avoid the little ones becoming sick at all."

However, for Sarah, there is a bright side to all this. "When they get the right nutritional [and medical] support, they soon start to respond and then they begin to play; that is truly amazing," she says, smiling. "There are also daily triumphs when previously malnourished kids come back to the clinic looking so much better."

Compromised children are given high-calorie milk and a highly nutritional, peanut-based food. However, funding has slowed because of the recession, she says: "So food support is being affected. Yet, a child in Zimbabwe could be fed for a week on the cost of a cup of coffee in Dublin."

Sarah says her situation is made easier by the kindness of the local people. "Zimbabweans are famous for their warmth," she says. "I meet elderly women who come from miles away to bring their [orphaned] grandchildren to the clinic. They can barely walk or put food on the table, yet they worry about me. Amazing."

There is also the fact that she is passionate about what she does. "Working with MSF is such a privilege," Sarah says. "I have days when I am utterly exhausted, but I see myself doing this for many future missions. Then the phone calls from the Irish mammy and daddy also help -- I realise how lucky I am to have parents."