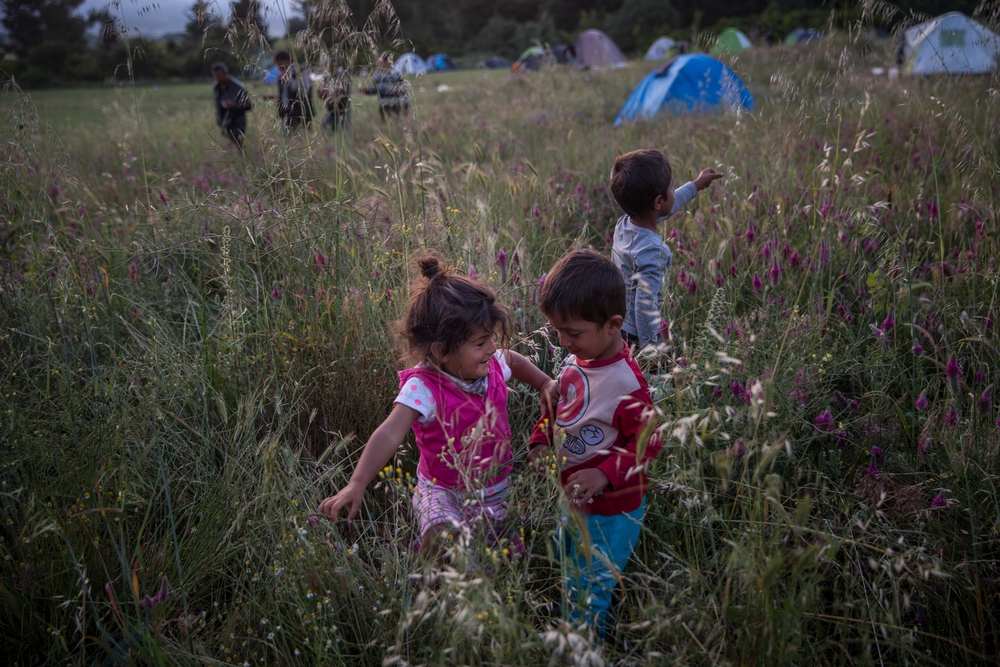 Dr Conor Kenny has been working with Médecins Sans Frontières (MSF) at the Idomeni refugee camp where thousands of refugees and migrants have been camped out in recent months. On 24 May Greek police arrived to evict everyone from the camp. Many volunteers and journalists were not allowed into the camp during the forced eviction, but Dr Kenny and the MSF team had limited access.

The spectacular sunrise over the Bélles mountains which gives light to those enduring this dark chapter in Europe's history was interrupted by large police battalions filing through the entrance of Idomeni camp. One by one, each tent was systematically opened by groups of [riot] police and residents were told to pack their things and board buses destined for official camps across northern Greece.

Gathering up their meagre possessions, the procession of refugees marched peacefully through the gauntlet of police towards the waiting coaches.

Jodi Hilton/Pulitzer Center on Crisis Reporting
Portrait of an Iranian Kurdish family who are living at an abandoned hotel near Idomeni Camp in Greece.

One well-dressed family of five stood out in the demoralised crowd. Led by a father who was clearly resolute in his decision to remain dignified in this undignified situation, he marched with his family towards the open luggage bay beneath the bus. The eerie silence that had filled the air since daybreak was broken by a bulldozer demolishing their makeshift shelter behind them.

Made of wood from tree branches and covered with blankets, it had been their home for 3 months. Other families followed. A three year old girl stumbled through a field of poppies and long grass, trying to keep up with her teenage brother. Despite his size, he was struggling to balance the wheelbarrow carrying their belongings.

Jodi Hilton/Pulitzer Center on Crisis Reporting
A digger removes tents and rubbish during the evacuation of Idomeni Camp in Greece.

Many refugees came to our clinic that day. Some rushed in before boarding the buses, ‘Will we have a doctor there?’, ‘Where can I get my medications?’. Most came not for medical assistance, but to try to make sense of what was happening. The mood was sombre. Many came to thank us. Many came to cry. Some were scared. Others were confused.

‘Where will they send us?’, ‘What are the camps like?’, ‘Will we have food?’. Tragically, we have no answers to their questions. We have not been involved in the government’s plans. We are learning what’s happening, as it happens.

We know initial reports suggest many of these new camps are no better than Idomeni, and several are worse.

This is just the latest chapter in a series of events that have stripped these people of all sense of power and control over their lives. We finish the shift feeling low, uncertain of what will happen next and anxious about the futures of the people we have come to know well over the past few months.