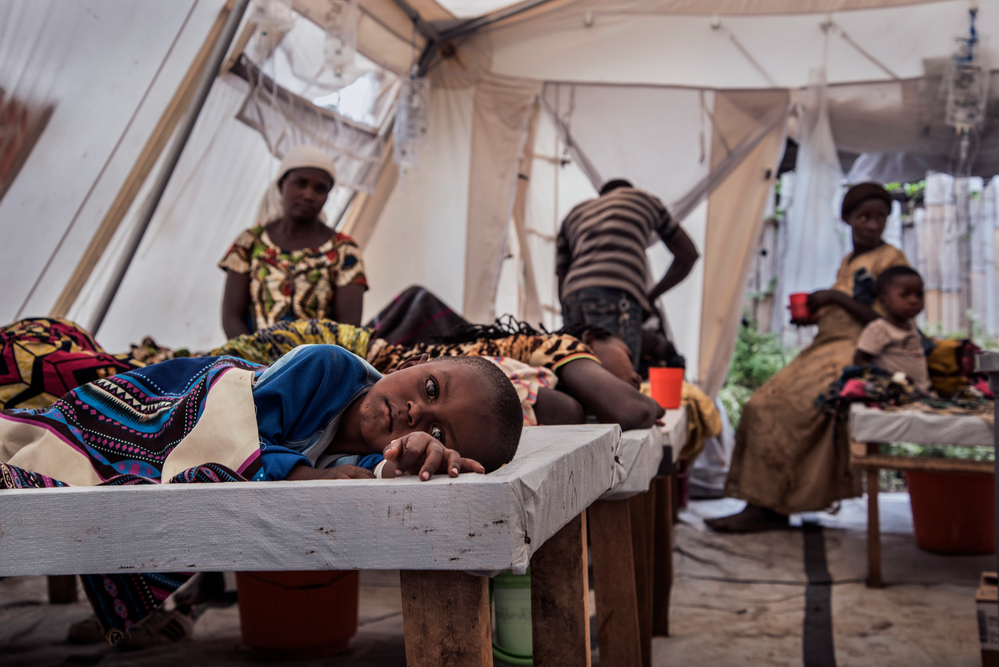 A cholera epidemic is surging through South Kivu, with more than 1200 patients treated by a Médecins Sans Frontières (MSF) since late July. The region’s poorly-equipped health centres are overwhelmed and there is a high risk that the situation will spiral out of control.

At the cholera treatment centre in Minova, Elisabeth Chihemba sits quietly next to her three-year-old son, Elris Kamo. The child barely moves as a thin tube feeds fluids directly into his veins. Elisabeth and Elris are in the area reserved for the most severe cases.

All around them, rows of beds are filled with children, lying or sitting listlessly as their mothers weave in and out of the tent, some wringing mops, others trying to encourage their children to drink. Here and there are beds with shrunken adults.

This August morning, the waiting room at Minova cholera treatment centre is full. Patients in an extreme stage of dehydration – mostly children – are swiftly put on intravenous fluids; others, after a quick triage, are whisked away to one of three treatment areas, depending on their degree of infection. As this routine unfolds, relatives huddled outside look on anxiously. 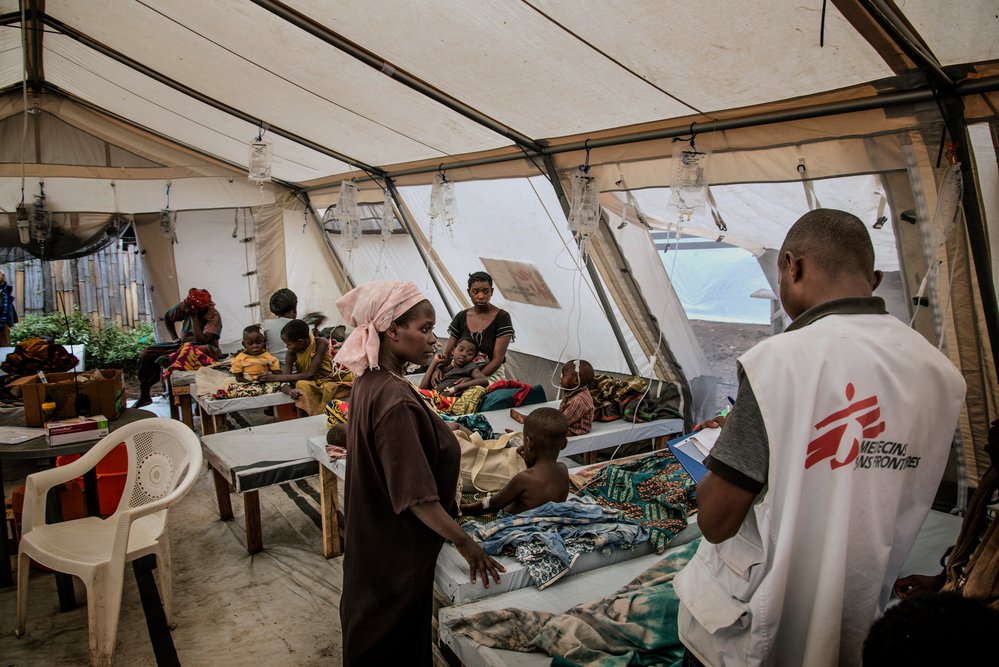 Arjun Claire
Area reserved for the most serious patients at the Cholera Treatment Centre in Minova.

When an MSF team arrived in Minova to assess the situation, they found the main health centre struggling to manage the situation.

“There were only 19 beds for 46 patients and several people were sprawled on the floor in extremely unhygienic conditions,” says MSF emergency coordinator Aude Thomet. 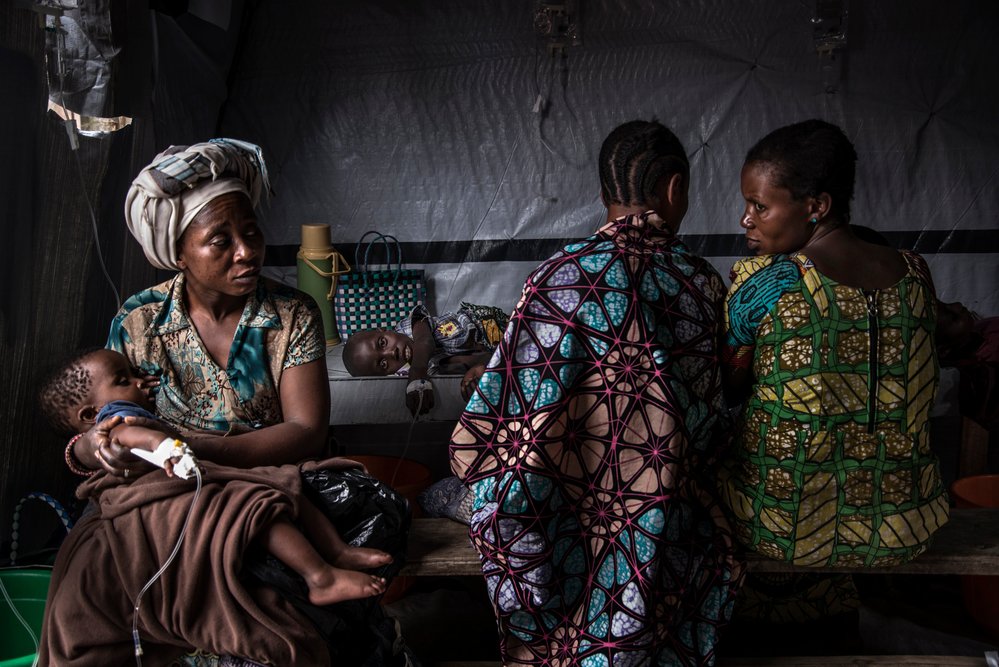 Arjun Claire
A group of woman at the triage room of the cholera treatment centre in Minova.

“There was only one nurse present, with no system for triage. The regional health authorities had little or no intravenous fluids, oral rehydration solution or chlorine to treat water, all of which are essential to contain cholera.”

Faced with patient numbers doubling from one day to the next, MSF responded rapidly, bringing the cholera treatment centre up to international standards, adding more than 100 beds, and bringing in essential supplies and experienced staff to manage the epidemic.

It is currently dry season in Democratic Republic of Congo (DRC), causing a severe water shortage which provided the spark for the epidemic to explode. Minova’s close commercial ties with neighbouring Goma are likely to have brought the disease to this area. Only 40 km apart, people move between the two towns frequently, making it easy for an infected person to spread cholera from one to the other. 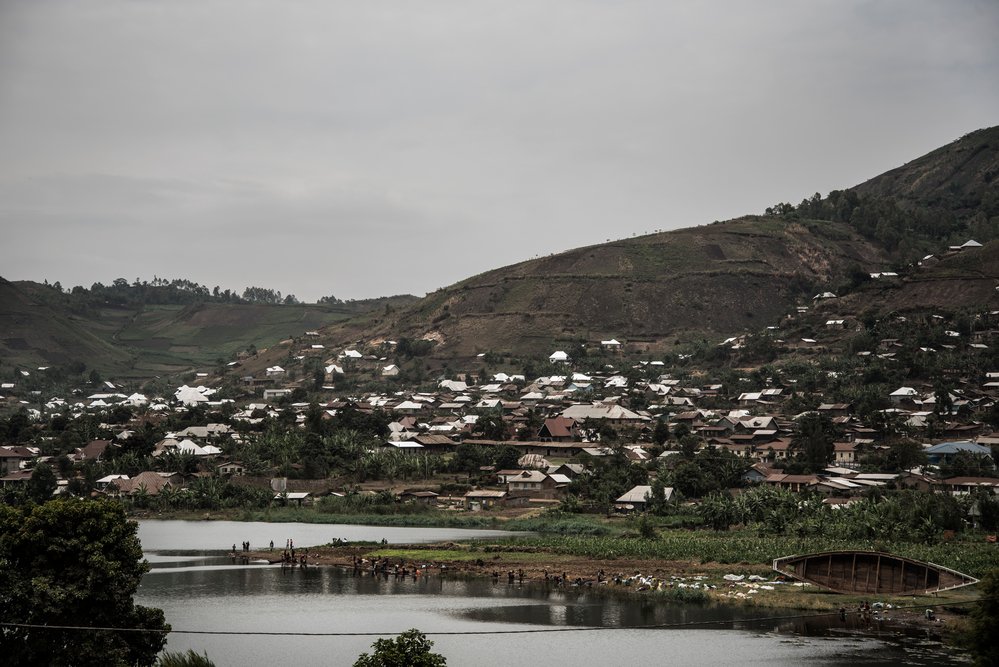 Arjun Claire
Minova sits next to Lake Kivu, which is likely to be contaminated. But despite knowing that it may harbor contagious microbes, many people have no option but to draw water from it.

In the bylanes of Minova, the intensity of the water crisis is stark. Alleys are packed with children, adolescents and women carrying yellow jerry cans to try and fill with water.

“Minova does not have clean water”, says Elisabeth. “Morning and evening, I have to travel for over an hour to get drinking water from one of the few functioning taps in the town. For the rest, I draw water from the lake like many others.” 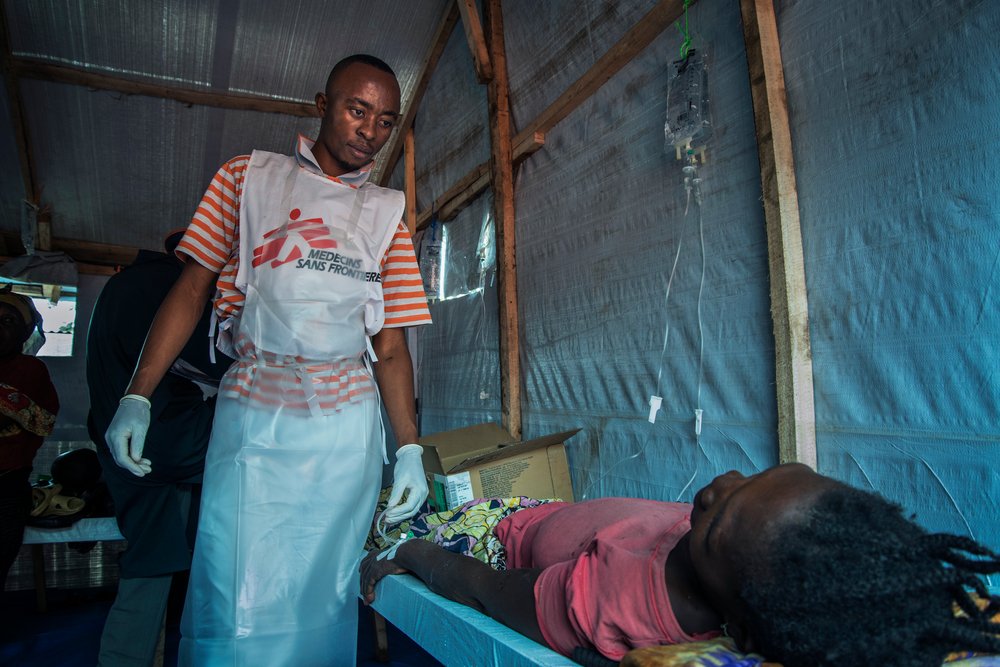 Arjun Claire
A MSF nurse attends to a patient at the cholera treatment centre in Minova.

The lakewater in Minova is likely to be contaminated. But despite knowing that it may harbour contagious microbes, many people have no option but to draw water from it. MSF medical records show that more than 50 percent of patients in Minova cholera treatment centre come from that part of town which lies closest to the lake and furthest from sources of clean water.

A dozen chlorination points where lakewater can be made safe have been set up by local health authorities working with the Red Cross. But these are nowhere near enough for the 200,000 people who live in the area.

“To stop the epidemic spiralling out of control, there’s an urgent need to reinforce preventive activities,” says Francesco Otero y Villar, MSF general coordinator in DRC. “More chlorination points need to be set up, affected areas need to be sprayed with chlorine immediately and a mass awareness campaign needs to be launched. At the same time, arrangements must be made to increase the supply of clean water and equip health centres with the necessary supplies to treat cholera patients.” 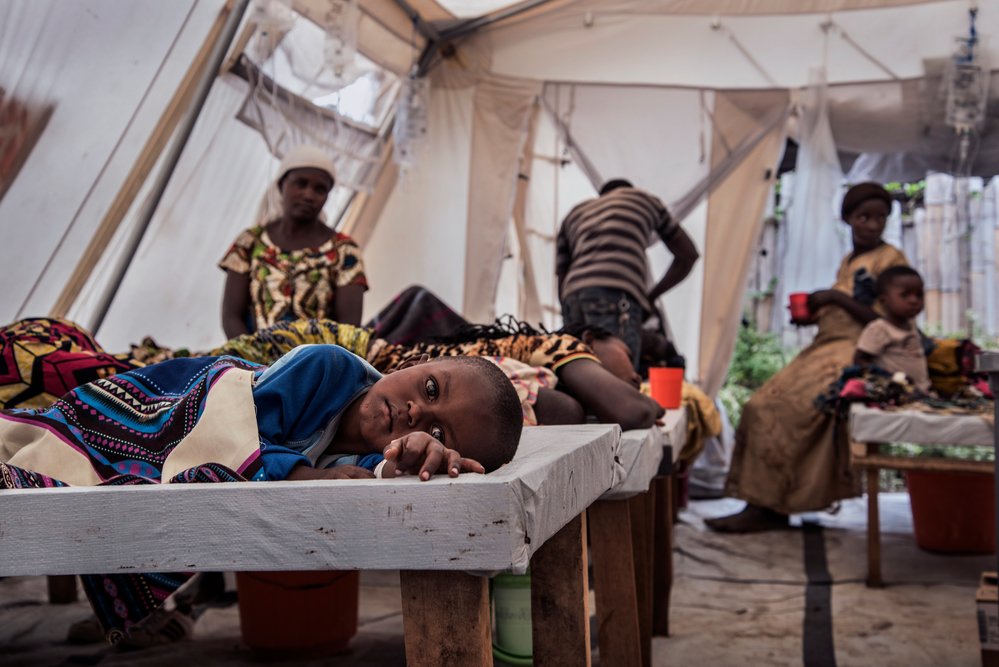 Arjun Claire
Three-year-old Salomon looks on as he undergoes treatment for cholera at the general hospital in Minova.

With few aid organisations working in South Kivu, mobilising resources and organisations has been difficult, delaying the response. MSF has extended its support to health centres in the towns of Bulenga and Bukavu, where the number of cholera cases continues to rise. A few community organisations are also trying to respond but, with limited finances, their range of activities is limited. 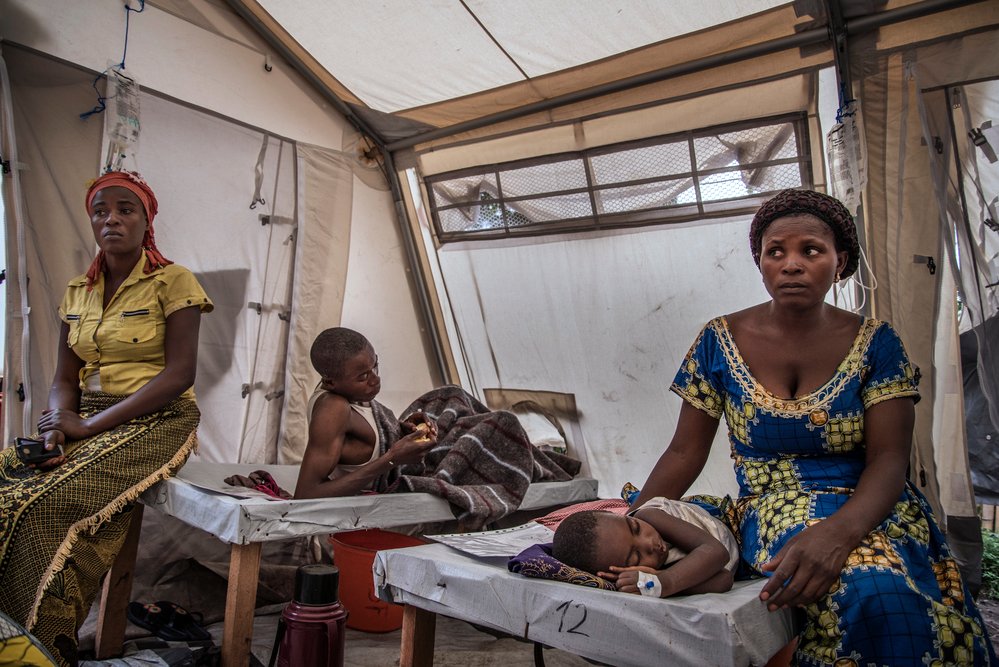 Arjun Claire
Elisabeth Chihemba sits quietly next to her three-year-old son, Elris Kamo, who is suffering from severe dehydration and is barely able to move.

One day on, Elisabeth’s son, Elris, is showing little sign of improvement. He is moving a bit, but still appears weak and his eyelids droop. “He vomited four times last night and twice already this morning,” says Elisabeth.

Meanwhile, new patients continue to arrive at the cholera treatment centre. With roughly equal numbers of people arriving and being discharged each day, patient numbers are relatively stable.

There are currently some 70 patients under care in Minova, 67 in Bukavu, 22 in Baraka and 18 in Bulenga. Since early August, MSF has treated close to 1200 people for the disease.

By evening, Elris has stopped vomiting and his eyes are wide open. The IV line feeding him fluids has been removed. Elris will be kept under observation for another day before he moves onto the next treatment stage, where he will need less intensive care.

“I feel better now that he is gradually improving,” says Elisabeth. “If it continues like this, I hope we’ll be home in another two days.”

more on our work in drc >