One new case has been confirmed from the city of Mbandaka, which has a population of more than a million and is a busy port city on the Congo River

MSF emergency teams are on the ground responding to the current outbreak of Ebola in the north of Democratic Republic of Congo (DRC).

Ebola is a serious infectious illness that causes internal bleeding and often proves fatal. It can spread rapidly through contact with small amounts of bodily fluid and its early flu-like symptoms are not always obvious.

According to the DRC Ministry of Health on 24 May, since the beginning of the epidemic, 52 people who have presented symptoms of haemorrhagic fever, 31 confirmed as Ebola, and 22 deaths have been reported. To tackle the epidemic and limit as much as possible the risk of it spreading, Médecins Sans Frontières (MSF) is stepping up its response in the affected areas (Mbandaka and Bikoro).

MSF Emergency teams are already on site and have set up an isolation zone in Mbandaka’s main hospital (5 beds) and one in Bikoro hospital (10 beds).

Teams are also setting up two Ebola Treatment Centres (ETCs) in Mbandaka and Bikoro, with 20 beds each.

Among the MSF staff on the ground are some of the organisation’s most experienced Ebola field workers, including medical personnel, experts in infection control and logisticians. 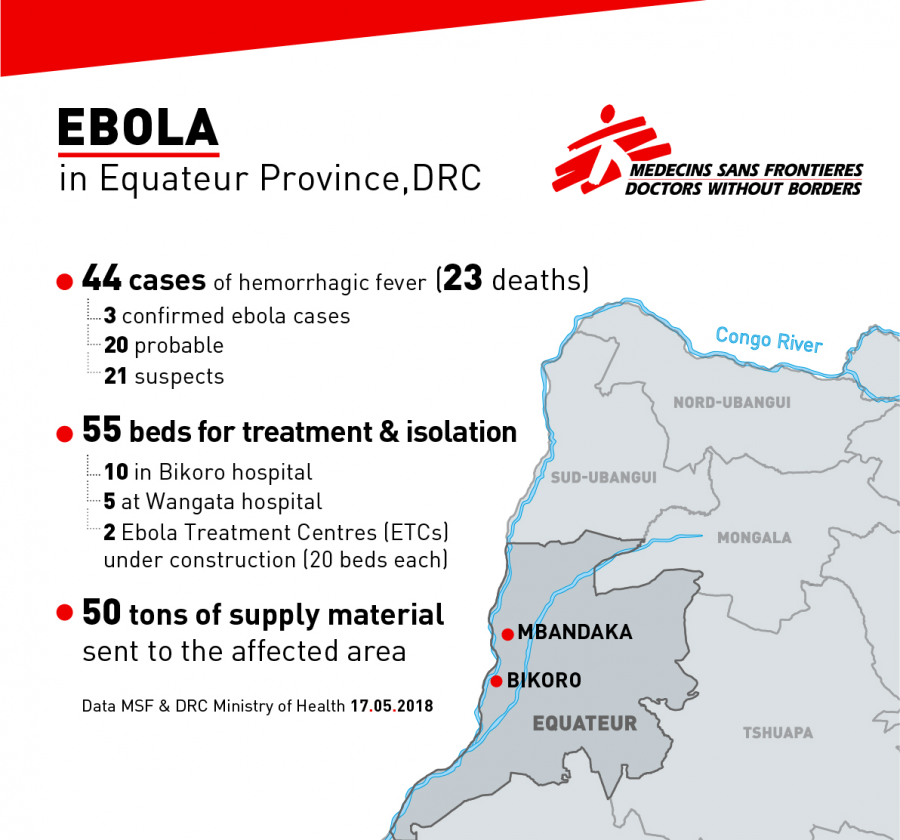 “This is the ninth Ebola outbreak in Congo in the last 40 years. So far, all of them have occurred in remote and isolated areas, as was the case last year in Likati, when the epidemic didn’t spread.” explains Henry Gray, MSF Emergency Coordinator in Mbandaka.

“With the new case confirmed in Mbandaka, the scenario has changed, and it has become most serious and worrying, since the disease is now affecting an urban area. It is paramount to trace the suspect case in order to have a clearer view on how it reached the city. We are working closely with the Ministry of Health and the other organizations in the field to implement a coordinated, tailored and rapid response to stop the spread of Ebola.”

MSF and its research arm (Epicentre) are working closely with the Ministry of Health and the World Health Organization (WHO) on the implementation of the Ebola vaccine rVSVDG-ZEBOV-GP as an additional measure to control the outbreak.

Whilst the strategy is being put in place, the “pillars” of an Ebola intervention must continue in order to stem the spread of the disease. These include