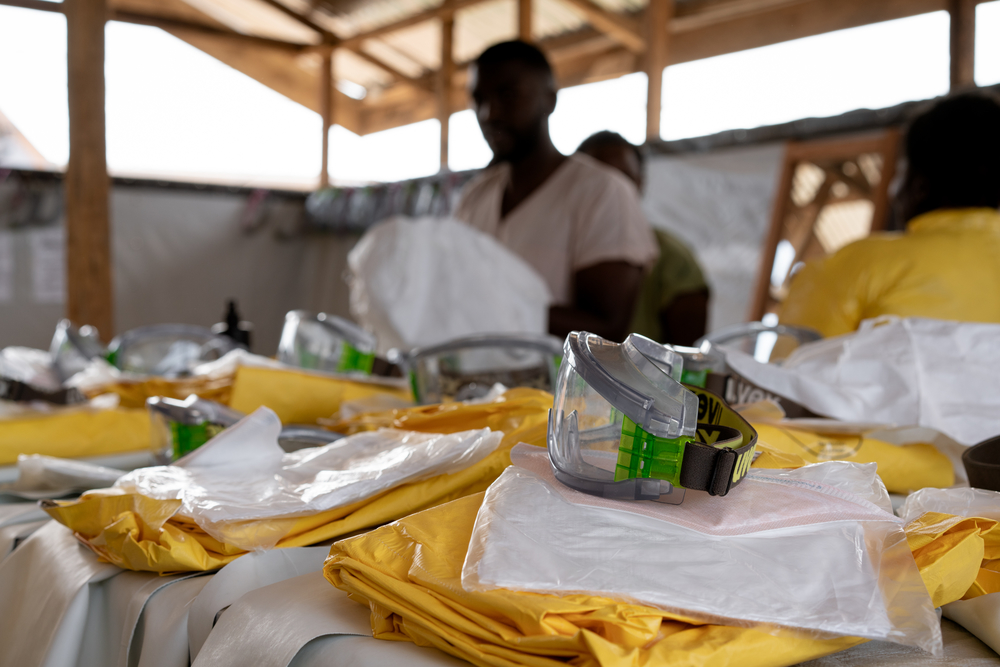 DRC: To gain control of the Ebola epidemic, the response must look beyond Ebola.

As the outbreak in eastern DRC enters its nine month and almost 700 people have died from the disease, the number of new cases has soared over the past few weeks. One of the main reasons for the struggles of the response may be its failure to adapt to the population’s needs.

“In this epidemic, rather than just one big epicentre, we see multiple small clusters all over the place – and we’re finding it difficult to track them and predict where the next one is going to happen. It feels like we’re running behind the outbreak, like we’re not in control” admits Dr Natalie Roberts, Emergency Manager at Médecins Sans Frontières (MSF). She recently came back from North Kivu, eastern DRC, where over 1,100 people have fallen sick with Ebola and over 60 percent of them have died, since the epidemic broke out in August last year. Her words express a well-known issue for the organisations working under the lead of the Ministry of Health: while Ebola Treatment Centres (ETCs) and Transit Centres (TCs) are filled with patients, almost 90 percent of whom turn out to be ill from something other than Ebola, new confirmed cases appear outside the epidemiologists’ radars, seemingly out of the blue.

The number of new infection soared in March, passing from 26 to 72 per week over the course of the month. Over the past few weeks, half of the people confirmed as positive to the virus had no connections with previously known Ebola patients and almost half of the new Ebola cases are confirmed only post-mortem: people die without the specialist care that could have helped them, despite usually visiting multiple health facilities.

A solid grasp of the “chain of transmission” allows early identification and admission to care for those who may be ill. It also helps in understanding how the virus spreads, improving the chances of controlling the outbreak. Facing an uphill struggle on this front, the Ebola response system has adopted an exceedingly conservative approach to the management of new alerts: people who present even the vaguest symptoms compatible with the disease are hospitalised in dedicated centres to be tested, even when there is a low probability that they actually have Ebola. 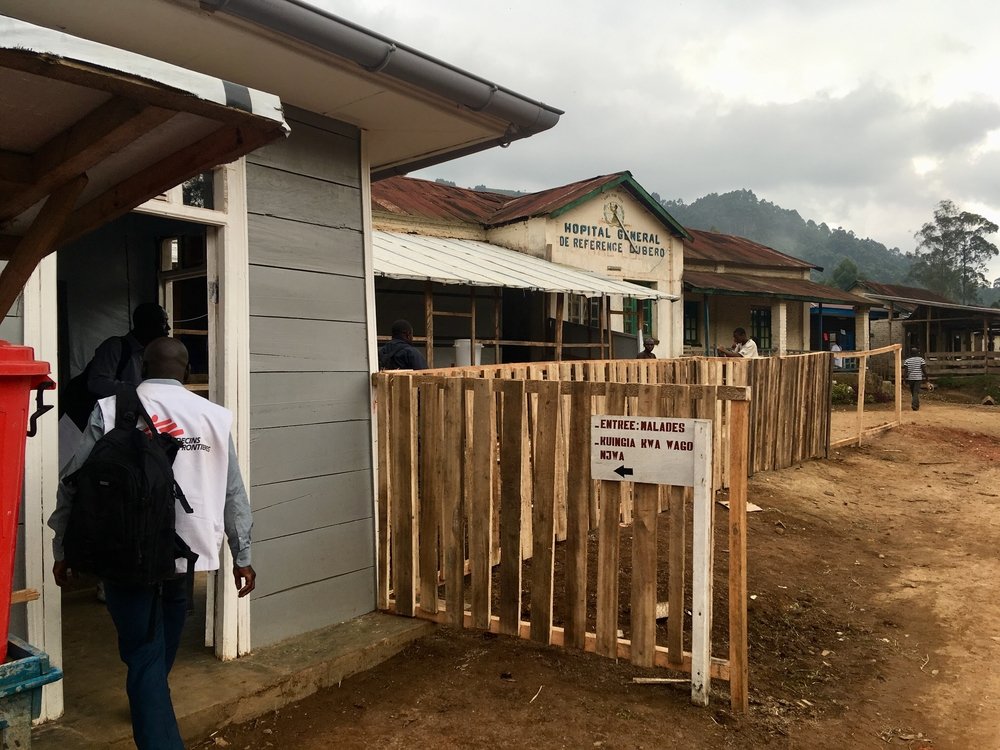 “Most of the patients admitted in these centres have not been tested for Ebola yet. They may have symptoms of the disease, but these symptoms are shared by other health issues common in the region, including malaria” says Dr Roberts. “What happens is that the majority of these patients don’t have Ebola, but they end up spending two or three days in the centres before they’re allowed to leave. If they have an illness other than Ebola, they’re not necessarily being treated appropriately for it.”

The fear of being forcibly hospitalised adds to the poor perception of ETCs among the population: these structures are associated with a deadly disease, a regime of isolation and the use of protective equipment that makes staff unrecognisable and intimidating. Despite efforts to make them more accessible, such as the use of see-through partitions and enhanced proximity between patients and visitors, what happens beyond the entrances of ETCs remains shrouded in mystery for the community. As a consequence, potentially sick people often do their best to avoid them – even if they suspect they might have contracted the disease. The result is a vicious circle in which one’s reluctance to be admitted in an ETC is met with increased determination by the response to make sure no suspect cases fall through the cracks, leading to yet more reluctance and mistrust from the population.

“ETCs are specialised to treat confirmed Ebola patients, but people go to ordinary general health centres when they develop symptoms of illness because that’s what they know, that’s where they’ve always gone to seek healthcare” says Dr Roberts. Health centres and hospitals, she points out, offer the assurance that one will be treated for whatever illness they have; Ebola-dedicated structures don’t inspire the same confidence. Meanwhile, local health facilities, having no access to testing on-site, find it almost impossible to decide which of their many patients showing symptoms of infectious disease should be referred to a specialist Ebola centre, and which should be treated for more common illnesses.

A damning side-effect of this is that poorly equipped health facilities become a gateway for the virus, turning de facto into accelerators of the epidemic. While health workers are largely protected by an unlicensed but promising vaccine (offered to frontline workers under a specific, WHO-approved protocol also available to contacts of confirmed cases), patient-to-patient transmission seems to be an alarmingly recurring problem. A patient that is admitted to a health facility for a case of malaria or pneumonia, or to give birth, may share a room or medical equipment with one who is later confirmed as having Ebola. As a week often passes by between the onset of the symptoms and the confirmation of the disease, an infected patient may have been in contact with many other patients in multiple health facilities, making it almost impossible to trace all the contacts. Finally, a contaminated health structure becomes a non-functional health structure, reducing access to healthcare for the general population.

This disconnection between the Ebola intervention and the health-seeking preferences of the population has been a stumbling block so far, which may have contributed to the persistence of the outbreak and the fact that after a relative lull in the transmission, the number of newly infected people has increased again, wiping out hopes that the epidemic might end soon. “I think there’s a real risk to see a significant increase in cases” says Dr Roberts. “If a cluster of the outbreak spreads to another large urban population, such as Goma, we risk an explosion.”

How does one break this vicious circle? With a new strategy, according to Dr Roberts, who mentions the MSF work in Lubero, North Kivu, as a step in a new direction. “Our approach there is to integrate the activity in the existing health system: to help health centres in detecting signs of Ebola along other illnesses and having a level of hygiene that prevents the spread of disease among patients. Then, two scenarios apply. If a patient isn’t critically ill but might have Ebola, blood tests can be taken in the health centre or even at home. If they show signs of severe illness, they are sent to the hospital, in a specially adapted isolation-resuscitation area, where we can treat other illnesses with similar symptoms, such as bacterial sepsis or severe malaria. During this initial management, we take a blood test for Ebola and send it to the nearest lab facility, in Butembo. This way, we only admit patients to Ebola centres when we definitely know they have Ebola, and we make sure they receive a level of care adapted to the severity of their illness.” Limiting referrals to the ETC and offering more comprehensive and individualised care, says Dr Roberts, will encourage people to participate in the response.

Equally needed is a more effective message about the benefits of reporting to health centres as early as signs of illness appear. “We want people to understand that whatever their illness, outcomes are always better if you get treated earlier. It’s the same situation for Ebola as we see with septicaemia or malaria. If patients wait until they become very unwell before they seek treatment, then their chances of dying are higher.” Should laboratory tests confirm that a patient has Ebola, says Dr Roberts, it should be made very clear that a timely transfer to a dedicated structure to receive specialist care can increase chances of survival.

“Ebola is a very scary disease” concludes Dr Roberts. “It’s normal for people to be very afraid and not really understand the measures that are put in place to fight the spread of the virus. They don’t see how the current response benefits them and feel that it’s not working. They’re unable to decide about their own healthcare. We have to respond to that and try different approaches to manage both the Ebola epidemic and the healthcare of the population.”