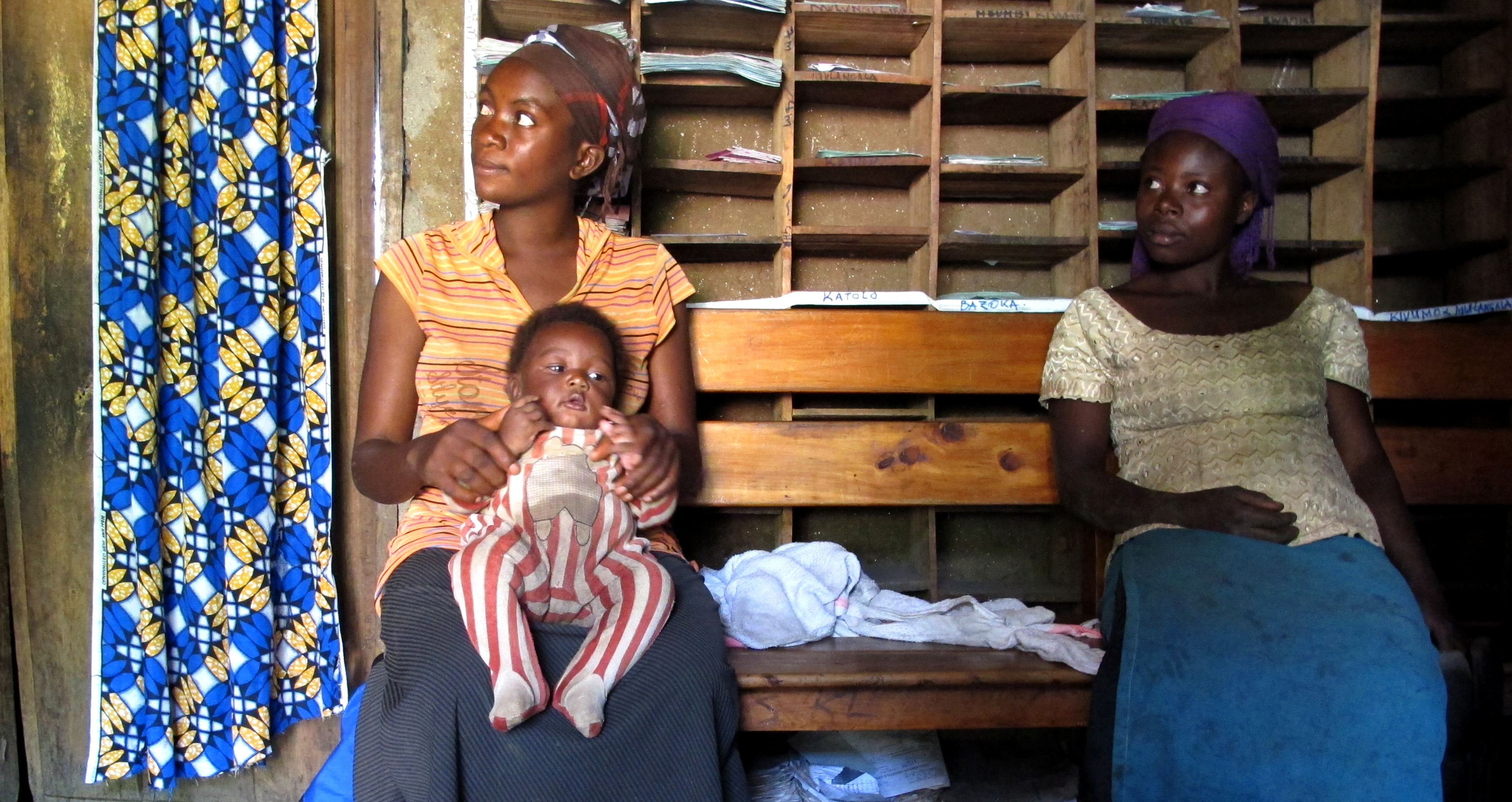 DRC: One less mother every 25 minutes

In the Democratic Republic of Congo (DRC), 21,000 women died last year due to complications during pregnancy and childbirth. Literally, one thousand times more than in Spain.

“This child had a miraculous escape. A few more minutes and there would have been no one to resuscitate him,” explains Carolina Jiménez, medical coordinator of the Médecins Sans Frontières (MSF) mission in Minova. On the banks of Lake Kivu, the area separates Rwanda and the Democratic Republic of Congo (DRC).

A few minutes ago, a woman crying in pain arrived at the very modest, dark, mud-brick health centre where Jiménez and other members of MSF are holding a meeting with the staff to go over the case of a mother who had died in childbirth the week before. Suddenly, Jiménez and her MSF colleague, Dr Fidel Kiza, hurry out of the tiny office to go and help attend to a mother in labour.

Little Zawadi has just been born but is not breathing and resuscitation is needed. His mother has already given birth to five children, including at least one c-section. It was a high-risk pregnancy, and besides, the mother arrived too late. 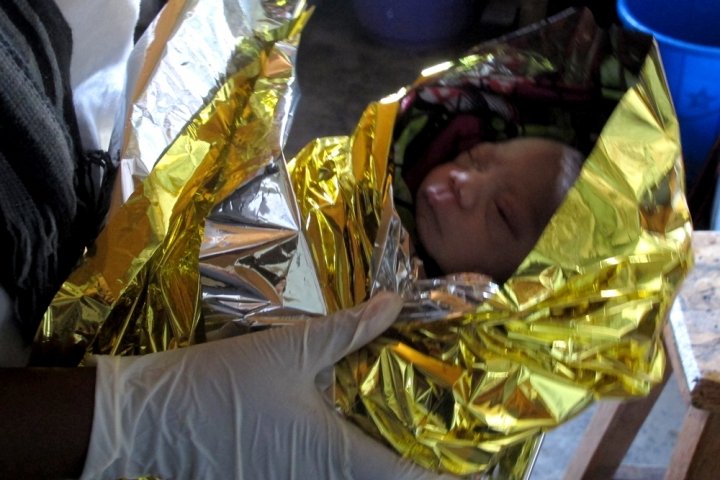 Pau Miranda/MSF
Zawadi had to be resuscitated after his mother arrived very late to the health center and delivery became very risky for both mother and son.

“The head of the baby was almost out and he was about to suffocate,” says the doctor a few minutes later. Now, everybody smiles. Mother and child are fine but the risk for both of them was very high.

Complications during pregnancy and childbirth

The episode is commonplace across the country, yet the outcome is not always as good as thisone.

According to the World Health Organization, 21,000 women died last year in DRC due to complications during pregnancy and childbirth. That is one every 25 minutes. That is, literally, one thousand times more than in Spain, for example. And babies also die. More than 100,000 newborns (almost 5 % of the country’s total) die at birth or just after.

“The three delays in maternal health identified in the 1990s apply perfectly to Congo,” says Patricia Lledó, MSF gynaecologist and expert in reproductive health. “The first one refers to the delay in making a decision because women fail to see that there is something wrong in their pregnancy, or they do, but for cultural reasons, do not ask for help. The second delay affects their arrival to the health centre, which in Congo poses an enormous risk for women due to geographic constraints, the lack of road infrastructure, and the insecurity in some areas. And the third delay is in receiving proper, timely care at health centre level because of the lack of human or material resources,” she explains.

One of the main results of the important shortages in the local health system is that health facilities are difficult to reach. According to UN figures for 2004, DRC barely had one doctor per every 10,000 inhabitants – for instance, 33 times fewer doctors than Spain – and most of them work in big cities. The lack of health infrastructure means that mothers who decide to go and deliver at a health centre have to walk for many hours before reaching the nearest medical facility. Manishimue, 20, had to walk for four hours from her birthplace, Chambombo, to the health centre in Shanjé just before giving birth to her second child. Now, she is lying on a bed in this small maternity centre located in the so-called Hauts Plateaux in Minova, about 40 kilometres from Lake Kivu. “They sometimes arrive from as far away as Bunyakiri, an eight-hour walk,” says Jackson, a member of the awareness-raising team in this remote and not easily accessible area. 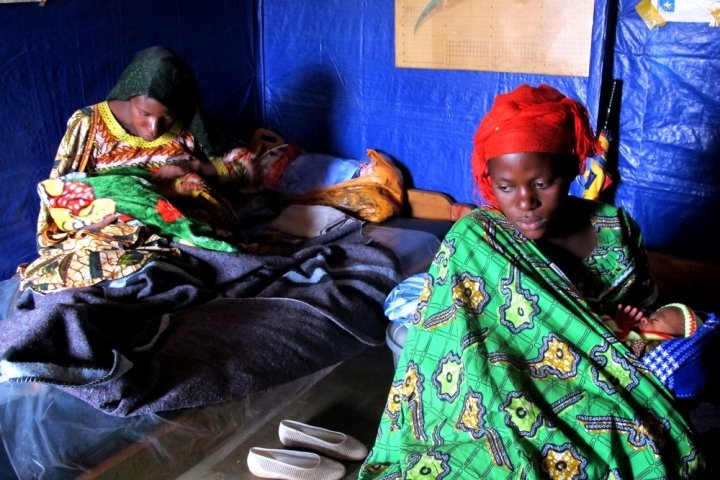 Pau Miranda/MSF
Mahirue (left) and Manishimue (right) had to walk for hours to get to the tiny maternity in MSF supported Shanje health center toget assistance durnig their deliveries.

The mountainous Hauts Plateaux area rises to above 2,000 metres and is very cold and humid. “They sometimes have a closer health centre, but they know that in the MSF-supported centres they will receive quality care for free,” he adds.

The 1,000 francs (a little more than one dollar) it costs for a consultation can be a problem in one of the poorest countries in the world, where the per capita annual income is barely US $400 (Kenya’s is $930 and the average for Europe is $34,000) and over half of the population live below the poverty threshold. The lack of resources also applies when it comes to buying costly drugs that many patients cannot afford. That creates room for irregular drugs that usually do not comply with security and quality controls.

Braving the transport difficulties, high-risk patients are referred to Numbi, where there is a better prepared health centre, and cases requiring surgery or transfusions are transferred to Minova – a more than two-hour motorcycle ride along a mountain road quite risky for any passenger, but even more so for a pregnant woman.

But while the problem posed by access difficulties is not easy to solve, the delay caused by traditions and practices that are deeply rooted in local communities (especially in rural areas) is even harder to address. “In the towns, you can see a little progress but most of the population live in rural areas and are stuck in a backwardness stemming from poverty and illiteracy,” says Dr Dina Dunya, a member of the MSF national staff in Minova.

Beliefs such as the fact that wealth is measured by the number of children a woman has, or that a mother who does not give birth at home like her ancestors is a weak person still very much prevail. To cap it all, there are a good many traditional healers in a region where diseases are thought to be witchcraft.

Cultural factors make Congolese women so dependent on their extended families that sometimes they cannot leave, even for a few days to go and give birth at a health centre. “In Congo, women lack decision-making power with regards to their health, they need permission from their husbands even to go and see a doctor,” explains Dunya, an expert in sexual and reproductive health.

Barbara, 25, was born in Hauts Plateaux, and came to Minova when she was pregnant with her fifth child to attend the antenatal clinics. At the health centre, she was advised to stay at a home for women with high-risk pregnancies, but a few days before her due date she left for her home. “I was close to it, about one hour’s walk, and had to look after my children,” she says.

When her labour pains started, her neighbours took her to hospital, but the situation was extremely serious. “Her uterus was ruptured, probably due to a previous c-section scar, and the child was partially out. It was a high-risk situation,” recalls Carolina Jiménez. The hospital teams in Minova managed to extract the baby, but the mother almost bled to death.

Three surgical interventions and blood transfusions were needed to stop the bleeding. “It was a miracle, she barely managed to survive,” Jiménez explains. Today, Barbara is slowly recovering at the hospital in Goma, the biggest city in the area. She still complains of pains in her abdomen and the incident has not been without consequences. She can hardly hold small Rahema, yet she wants to go home to “look after her family”.

Pau Miranda/MSF
Safi came to Numbi health center to have her newborn baby.

Despite the enormous difficulties, the efforts made by the authorities and the humanitarian stakeholders in DRC have succeeded in slowly increasing the number of young mothers that are aware of the need to go to the health centres before and during childbirth to avoid having to hope for a miracle. Safi is at the maternity unit in Numbi after delivering her fifth child.

“I have delivered all my children in health centres. Before, having your children at home without any medical care whatsoever was seen as something perfectly normal. However, more and more young women realise that here we and our babies are properly looked after. This is what we have to do.”