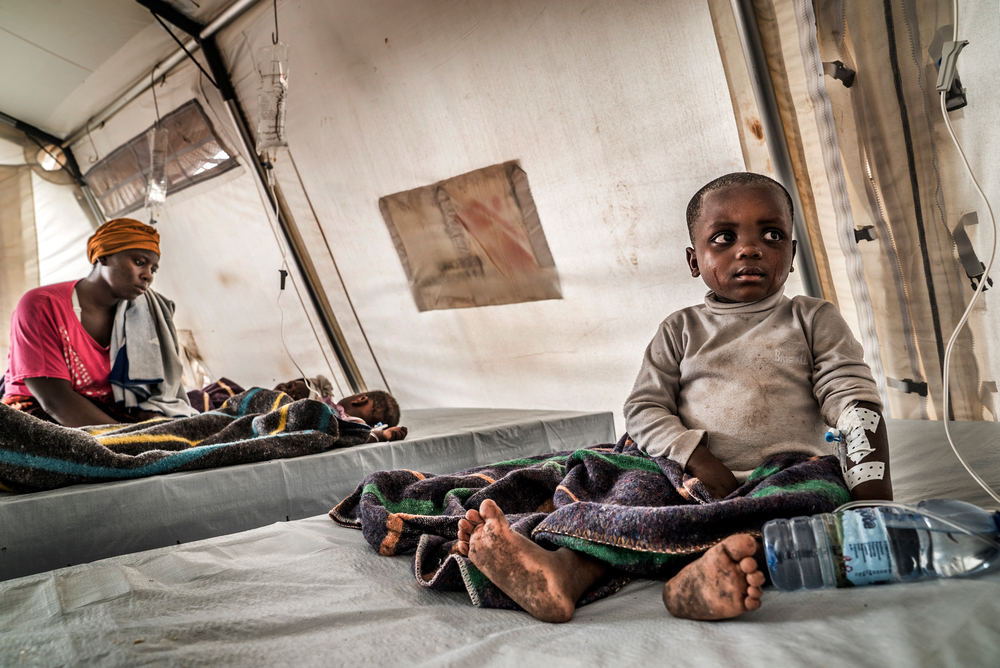 DRC: One of the most severe cholera epidemics in recent years

Aline Kaendo knew how to keep her five-year-old son Aristide safe from cholera at home.

“We treat the water at home, but the children play in the lake, perhaps drink from it while they play, share food and if they have bought it in the street, it may not have been prepared hygienically.

“They pick up fruit and eat it straight away. There are many ways in which my son could have become ill.”

Aline, 22, received all the right information to avoid her son contracting cholera: wash your hands, keep toilets clean, treat the drinking water, clean fruit and vegetables, but even then Aristide fell ill.

When Aristide became sick, Aline took him directly to the Cholera Treatment Centre (CTC) that Médecins Sans Frontières/Doctors Without Borders (MSF) has established in the city of Minova, South Kivu, in the east of Democratic Republic of Congo (DRC).

Cholera is widespread across DRC and, with more than 18,000 cases treated by MSF this year, (38,000 cases registered in the country), it is estimated that it will still take many weeks to bring it under control.

While in some areas the number of cholera patients is going down or remains the same, new cases are appearing in towns where cholera has never been recorded before. 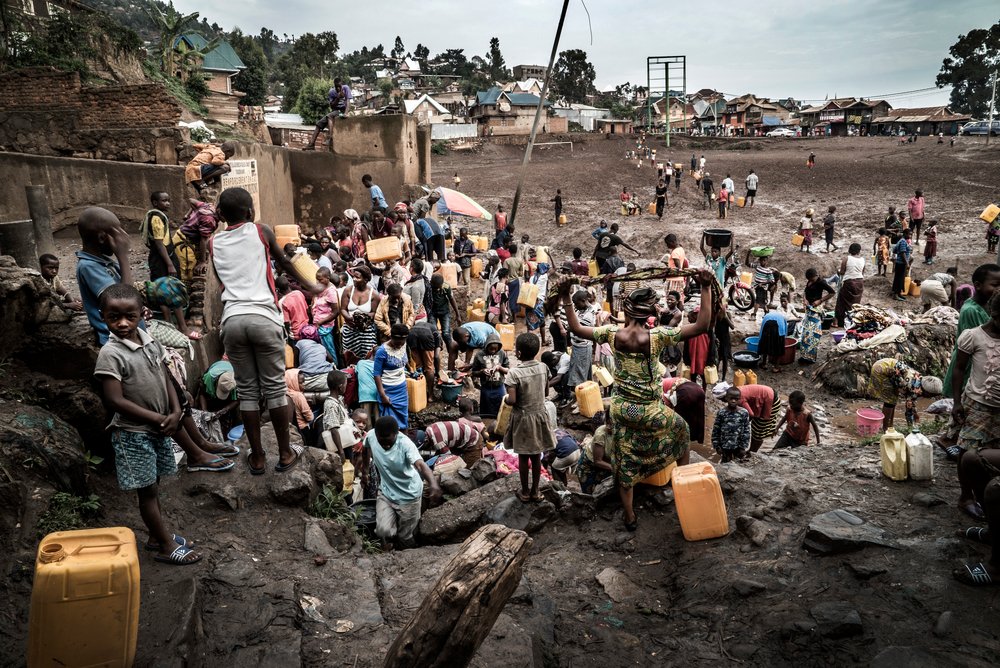 Marta Soszynska/MSF
People fetch water in the Funu district of Bukavu early on a Sunday morning. In Bukavu most people still don´t have access to running water. Many rely on wa-ter from lake Kivu or surrounding rivers and streams.

The persistence of cholera in 21 of the country's 26 provinces is unprecedented in the history of the disease in DRC.

Aline took Aristide directly to the Minova CTC because many of her neighbours had to take the same route and be there on the same days – a minimum of four – in order to be treated properly.

As of 11 October, there were 21 patients being treated at this CTC. A few weeks ago, at its peak, 50 to 55 new patients were admitted every day.

Aline lives in Budondo, close to Lake Kivu, a lake that dominates the region of South Kivu, and which also carries the potentially deadly disease.

“One of the main reasons why cholera has increased in such a way this year is the drought that has affected the country,” explains Francisco Otero, MSF's country manager in DRC.

“Wells have dried up or lowered in level and many people have been forced to collect water from unsafe sources, such as lake or rivers, because the authorities are not able to provide safe drinking water to the population.

“The response to cholera cannot only be medical treatment, it is also necessary to work on development to provide adequate water and sanitation to the population.

“Until that happens, cholera will remain a real threat.” 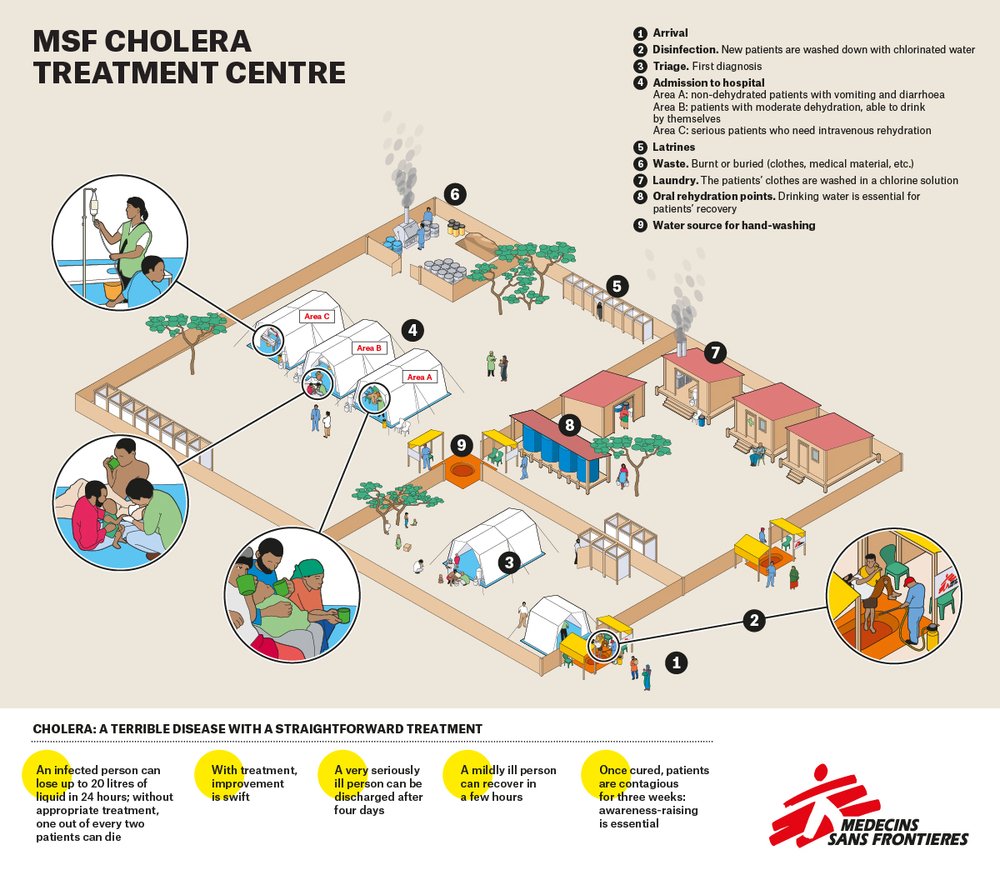 Another cause of the rapid spread of the disease is that it has infiltrated densely populated cities.

The capital of North Kivu, Goma, also served by Lake Kivu, has been affected, as have Minova and Bukavu, the capital of South Kivu, where cases have been found in many neighbourhoods.

In these cities, MSF is working to treat patients with cholera.

In many cases cholera devastatingly affects children under the age of five, but recently cases of older children with cholera have been detected in centres managed by MSF.

“We believe that the start of school has also contributed to the spread of cholera; more children over six are becoming infected now than they were a month ago,” explains Innocent Kunywana, MSF emergency department coordinator in the province, in charge of our response to the epidemic

“This may be due to the fact that students are exposed to contaminated food or drink on the way to school.” 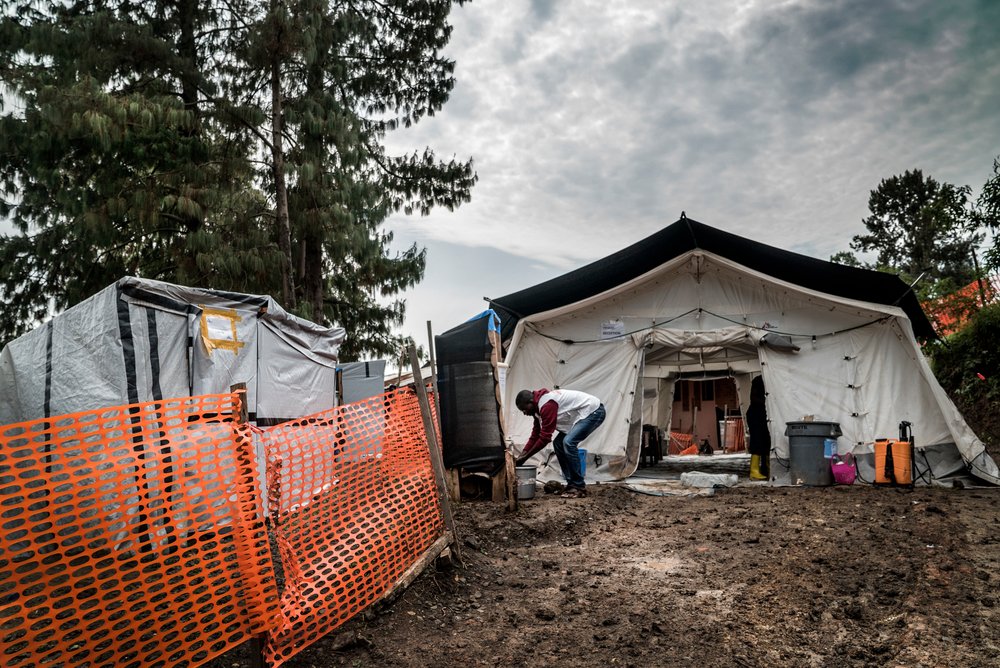 Marta Soszynska/MSF
Doctor Innocent washes his hands in front of the CTC tent, set up by MSF during the peak of the cholera epidemic in Bukavu, South Kivu. The big cities around lake Kivu: Minova, Bukavu and Goma were the first places affected by the epidemic.

This was confirmed by Jacqueline Niganda. Her son Awezaye, aged 10, became ill with very violent diarrhoea.

They collect water from a “poorly built” source she says, adding that Awezaye has to walk over an hour to get to school, “and there I cannot control what he does, eats or drinks.”

Before MSF arrived, they didn’t let you leave if you didn’t have the money to pay
RESSANCEMENT KISAKALABA   PATIENT AT MSF'S CTC ON THE ISLAND OF IDJWI

One reason that cholera continues to spread across DRC is the erratic prevention and information response to the population.

Cholera is endemic in several DRC provinces and sporadic cases are a regular occurrence. Despite this, health workers often do not know how to treat it.

“We have found some hospitals where cholera patients were mixed with other patients. Or the beds had no fluid drainage holes (those affected can lose up to ten litres of fluid via vomiting and diarrhoea), so the risk of infection to their companions or other patients was very high,” adds Kunywana.

Kahindo Chiraba travelled to Minova with her sick son. In Nyamasasa, her village, the water sources are damaged, so she collects water from a river, “in not very good conditions” and with no chlorination points (where people collect water, tablets are distributed to treat it).

Compounding this, those living in the village have not been informed about the dangers of untreated water. 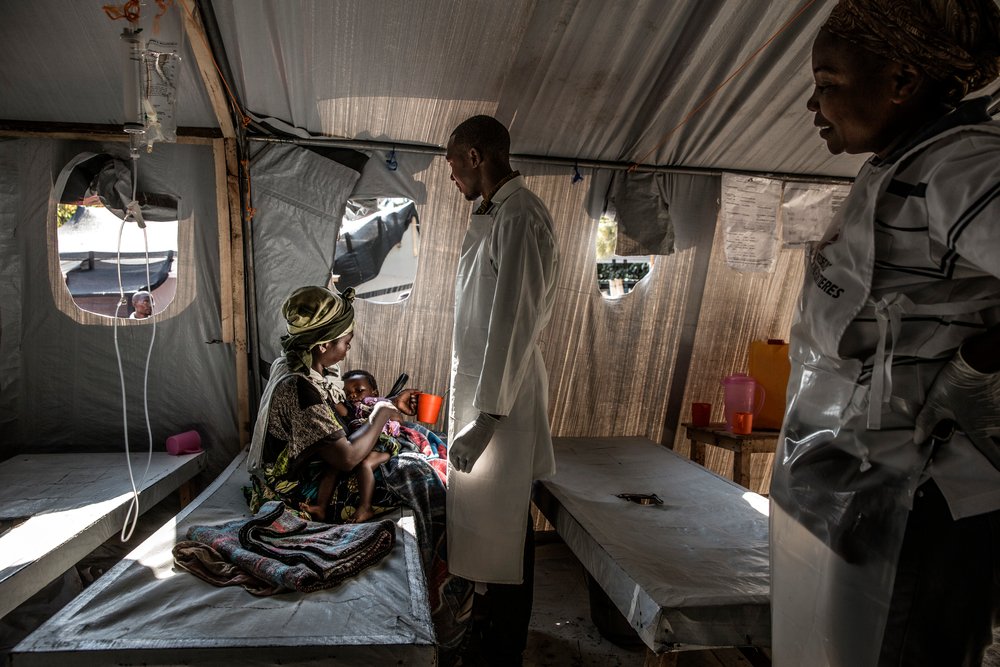 Marta Soszynska/MSF
MSF staff check on Madeleine Kidolo and her one-year-old son, Mapenzi. They have just arrived at the CTC in Minova.

She says that months ago, in August, some strangers promised they would come to explain how to prevent the spread of the disease, but that they never returned. Many people in her village have become ill.

“According to the Ministry of Health regulations, the treatment of cholera should be free, but sometimes hospitals are not provisioned for this.

“They must buy the materials and medicines themselves and operate with a cost recovery system. To ensure they don’t end up losing money, they often charge the patient all the same”, adds Francisco Otero, MSF's country manager in DRC.

“Before MSF arrived, they didn’t let you leave if you didn’t have the money to pay,” explains Ressancement Kisakalaba, a patient finishing his course of treatment at the MSF CTC on the island of Idjwi.

“A friend had to act as a guarantor or the head of the village had to be held liable and say that you would pay the bill and only then the hospital agreed to discharge you.”

Ressancement, a 42-year-old farmer with nine children, lives on an islet called Ntaligeza, situated across from Idjwi, which is accessed by canoe.

After he went to the toilet with diarrhoea four times in 10 minutes, he decided to cross over to Idjwi and travel to the CTC.

Idjwi was the last centre opened by MSF in South Kivu. About four tonnes of material were sent by boat in order to erect tents, isolate patients, install beds and develop a treatment system according to the severity of the patients.

It will still take weeks to control the epidemic around Idjwi.

Both North and South Kivu, which border Rwanda and are thousands of kilometres away from the country's capital, Kinshasa, remain affected by a two-decade conflict and a multiplicity of armed groups dominating much of the region.

Despite this, says Francisco Otero, “we see how there are increasingly few non-government organisations (NGOs), less presence of agencies and humanitarian aid organisations capable of dealing with emergencies of this type with sufficient and adequate means, especially in South Kivu.”

“Despite the enormous need, the violence, and the regular displacements of much of the population as they flee conflict, South Kivu is being gradually abandoned. 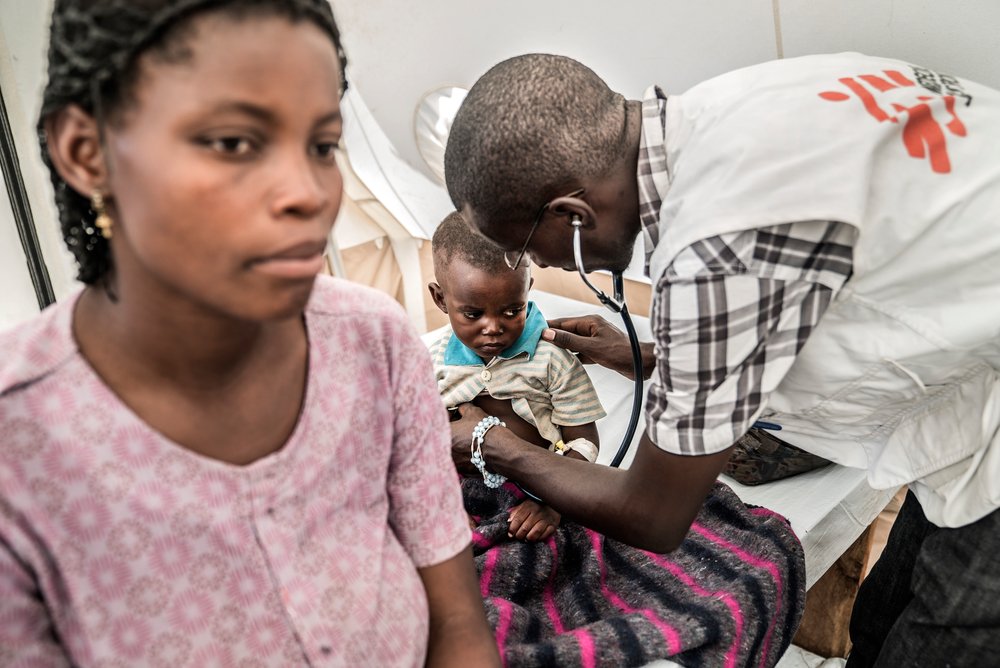 Marta Soszynska/MSF
Doctor Innocent examines a child in cholera treatment center in Kihumba, located in the northern tip of Idwji island on the lake Kivu.

“This year we saw a measles epidemic, we see it every day when helping displaced people and it has been shown again in this cholera epidemic.

“These situations are going to be repeated and will get worse if this situation is not reversed.

“The United Nations has raised the emergency level for the province to the maximum, level 3.

“We’ll have to see how this translates in the territory.”