Drought and malnutrition in the south of Madagascar: MSF starts emergency activities

The food lean season, which usually ends in April, is becoming more critical every year in the desert regions of southern Madagascar. Three consecutive years of drought have severely affected harvests and access to food, in a context now marked by the Covid-19 pandemic, which has led to a drop in seasonal jobs and other sources of income linked to tourism.

From December onwards, violent sand winds also covered part of the arable land and food used during the lean season, such as cactus fruit. As a result, the chronic food and nutrition crisis, known on the island as "kéré", is currently hitting the inhabitants even harder.

Since last week, an MSF team of medical and logistical staff has been working in the Amboasary district in the Anosy region to assess the situation and the activities the organisation could implement to help respond to the emergency. 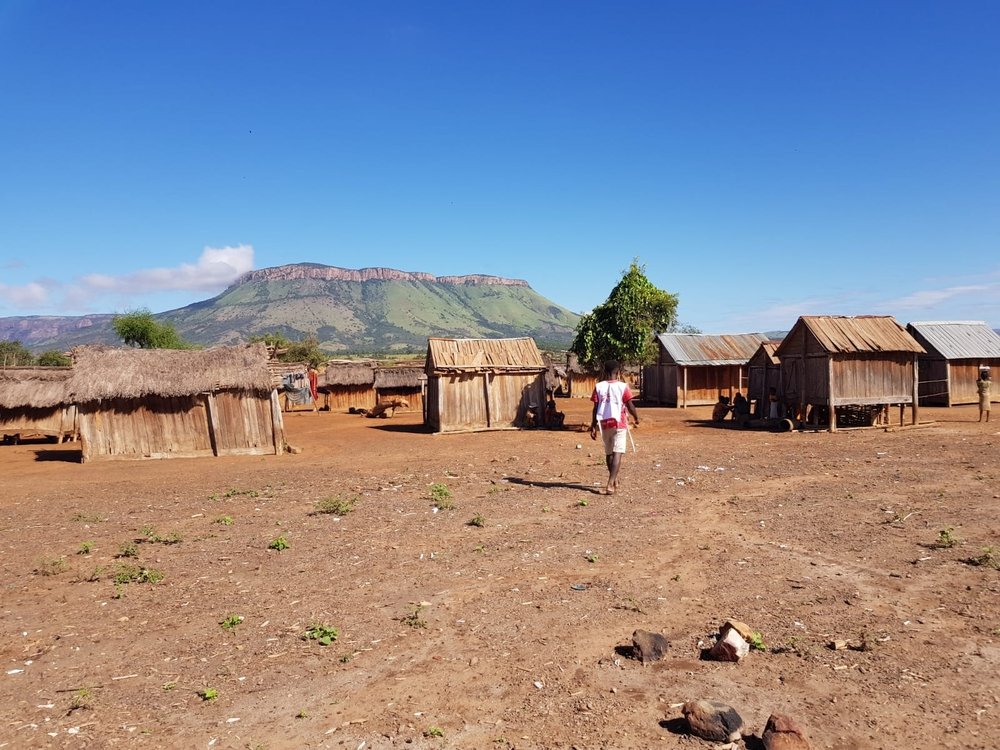 It is estimated that there are around 280,000 people in this district, which is one of the most affected.

The situation can be very heterogeneous from one part of the district to another, the villages are scattered and the distances are long and complicated to cover due to the tracks conditions and the geology of the area.

Logistical constraints represent a major obstacle to the deployment of humanitarian aid, both in terms of supply and delivery of equipment and the movement of teams. 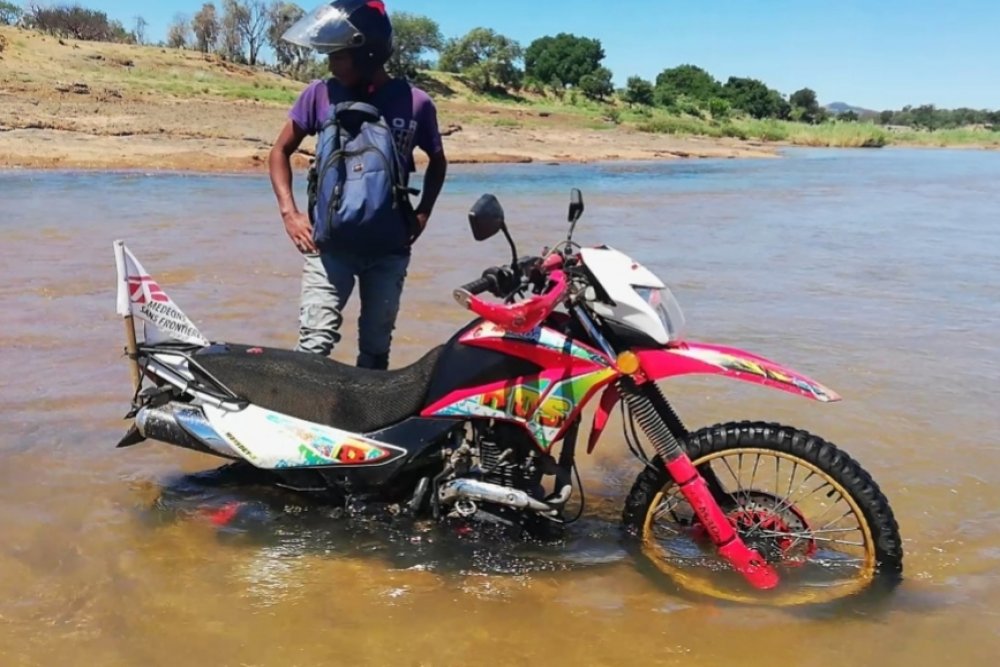 Our teams are currently present in the Ranobe commune, where they are carrying out screening and treatment activities for acute malnutrition in children, adolescents and adults. 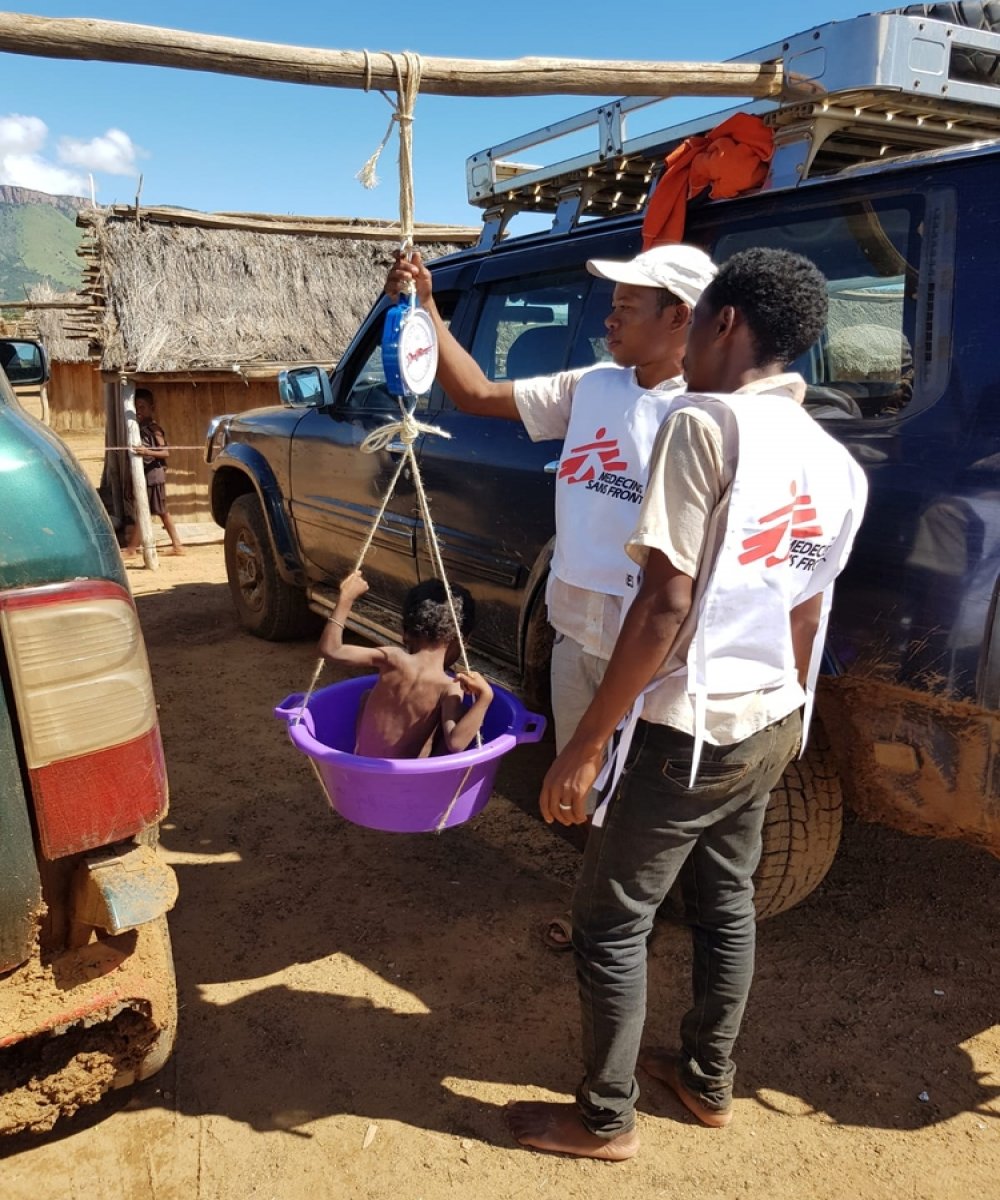 MSF
Mobile clinic in Ankamena. The food hunger season, which usually ends in April, is becoming more critical each year in the desert regions of southern Madagascar.

In Ankamena, a village in Ranobe commune, the first health centre is a day's walk away.

680 people attended the nutritional screening, and 137 were subsequently treated and will be followed up as part of the emergency medico-nutritional programme that MSF is launching in the region.

Among them, more than ten are children over 10 years old and adults. 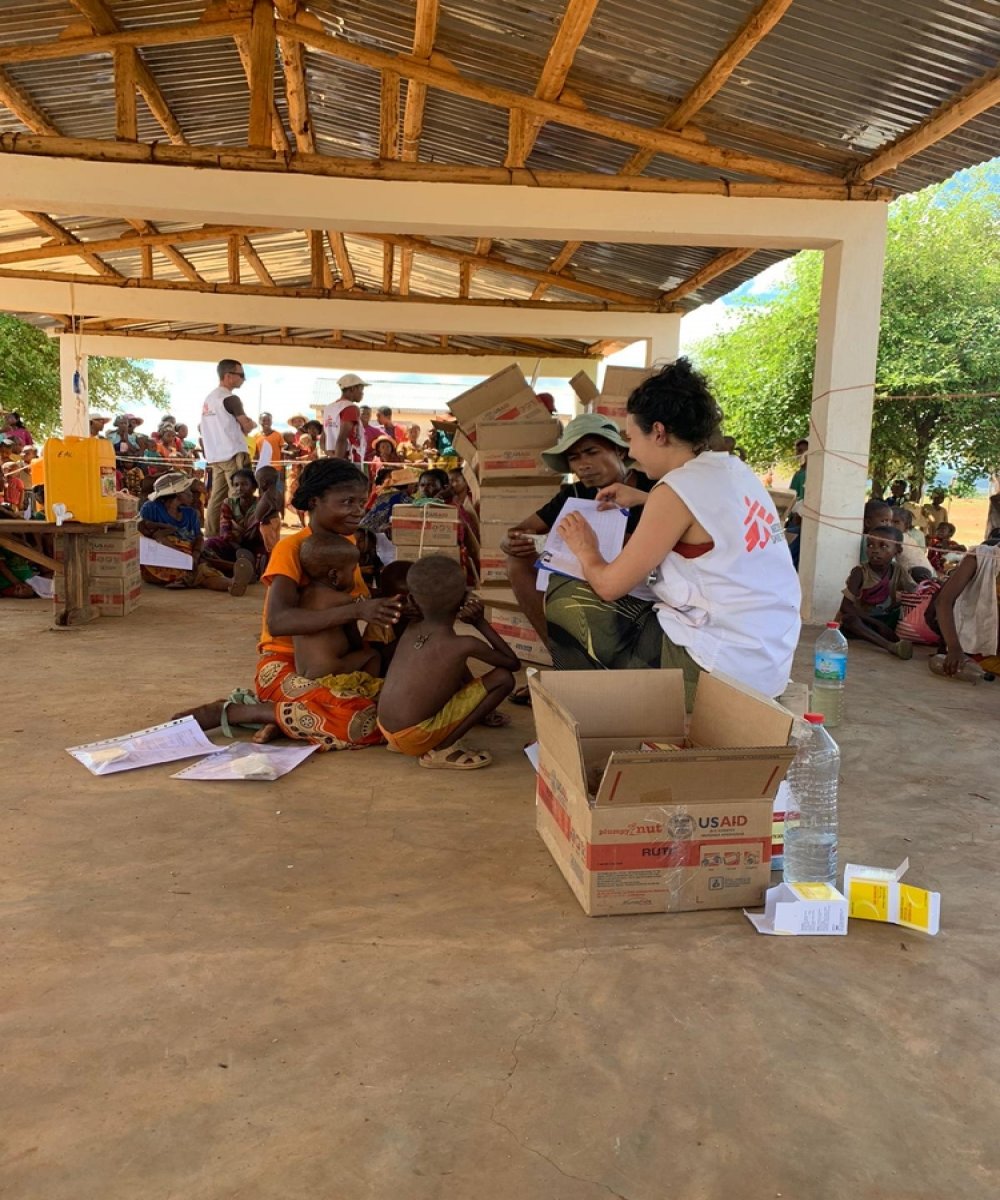 In the main town of Ranobe, screening and treatment of malnutrition are continuing, and more than a hundred people have already been included in the programme.

The presence of several families whose members, both children and adults, are severely malnourished, testifies to the extreme precariousness of the situation, even if it is still too early for us to establish a more complete picture at the commune level. 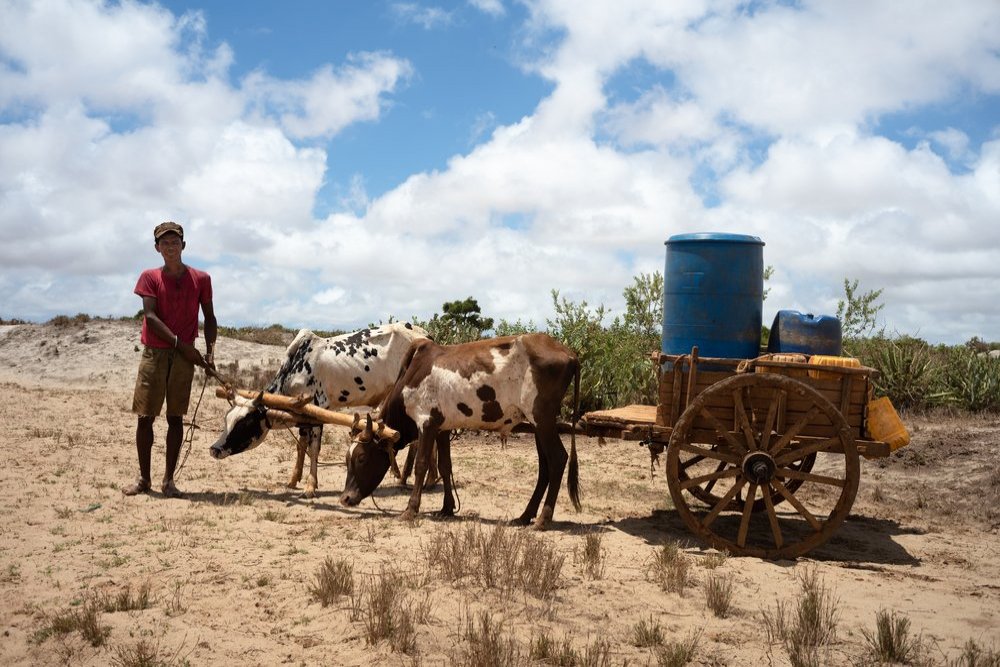 Ainga Razafy/MSF
After a light rain, this young man travelled more than an hour with his cart in the hope of finding water for his family of ten. The well was unfortunately empty. He will have to go to the city to finally buy the precious water.

Cases of intestinal parasitosis and diarrhoea are the other pathologies most frequently encountered by our team during these first days of activities. 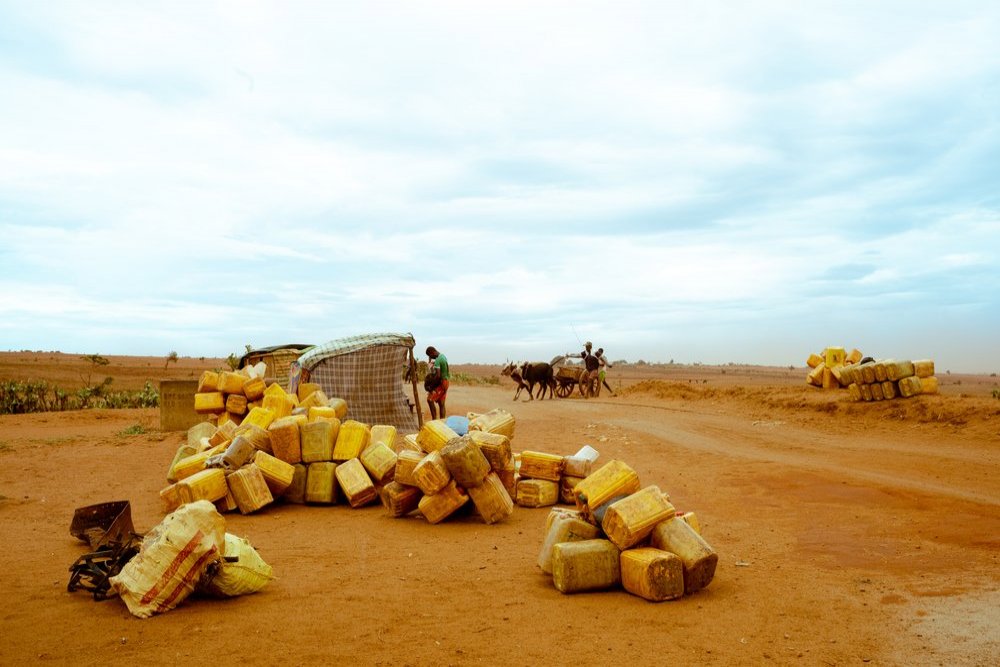 Ainga Razafy/MSF
At a crossroads on the national road, empty jerrycans await the arrival of a tanker truck to provide water for the families in the area.

In Ankamena and Ranobe, the first harvests are not expected before the end of June at least, and they look bad because of the drought and late rains, as well as the risks linked to locust invasions. 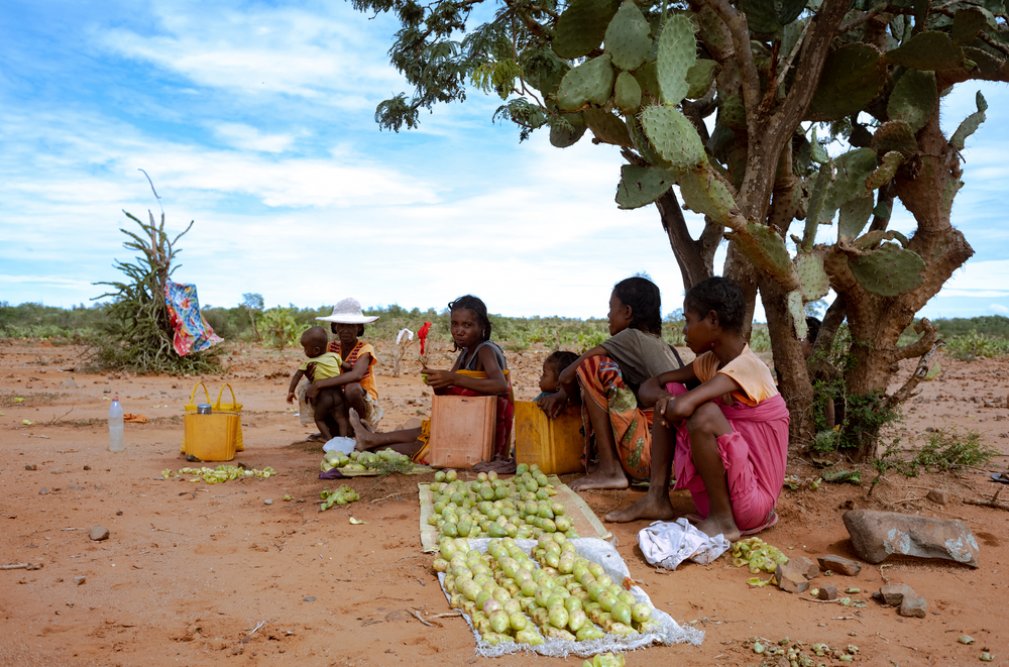 Ainga Razafy/MSF
Prickly pears are one of the last foods available in this austere environment. These women took a day's walk to collect these fruits which they sell on this stall, near a health center.

In the meantime, the food reserves usually consumed during the lean season, such as cactus fruits and eatable leaves, are running out, leaving many families unable to find food and dependent on distributions from the World Food Programme (WFP) and the state. 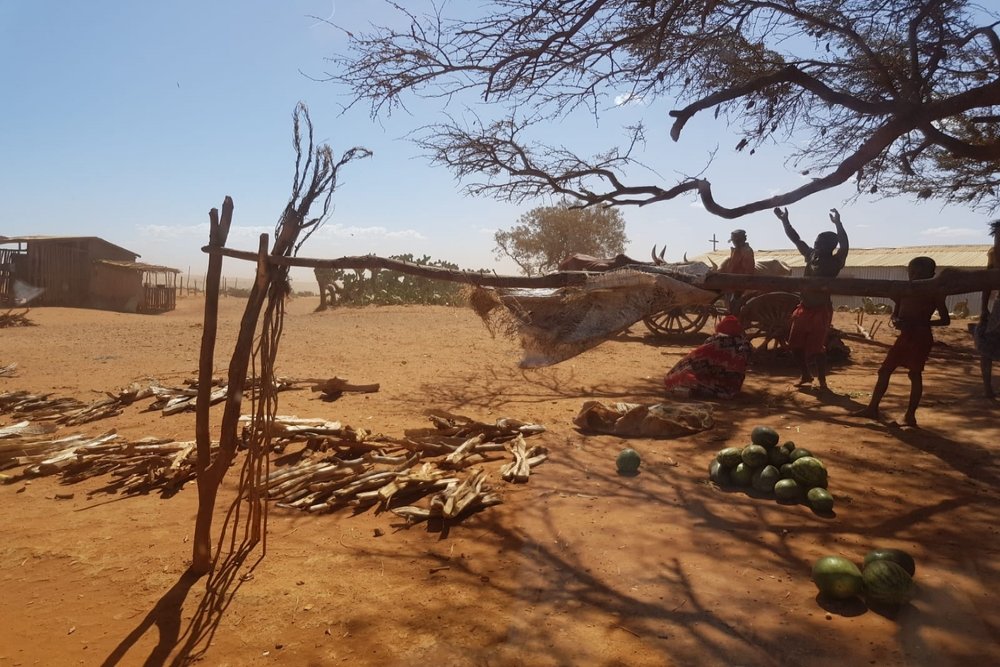 MSF's objective is therefore to support and expand the medical and nutritional care of children, adolescents and adults suffering from acute malnutrition in the district. 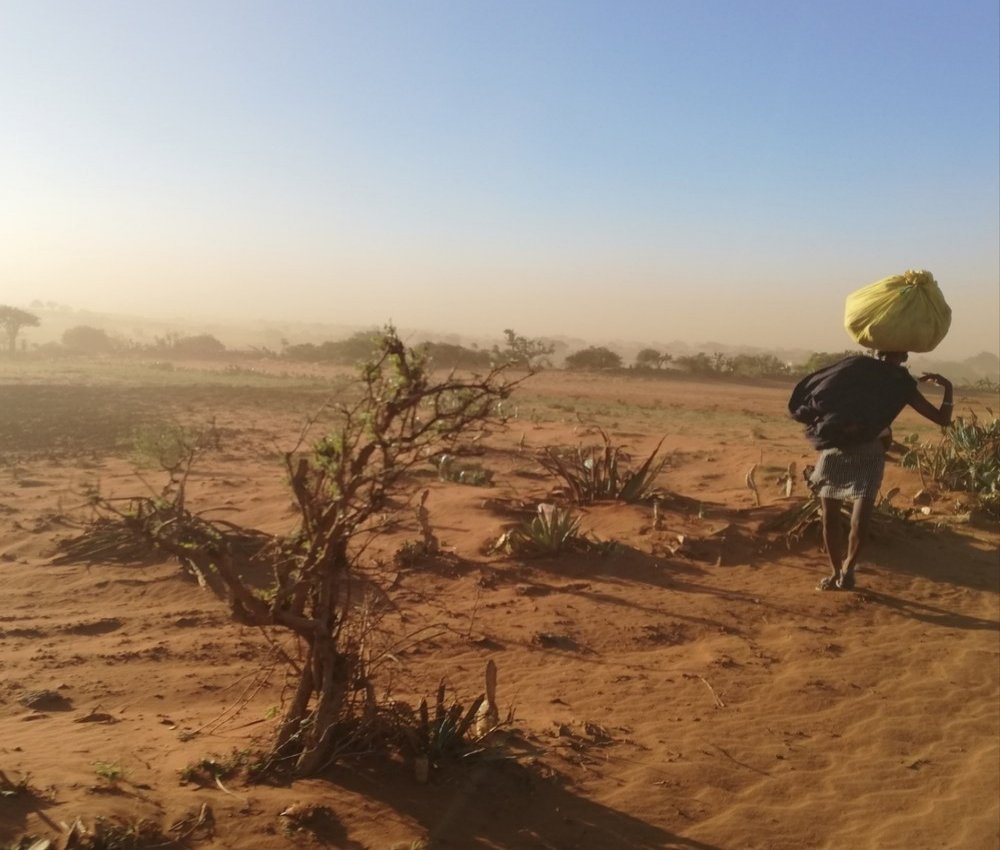 Improving access to and the quality of water will be an important area of work.

There is also an urgent need to strengthen the immediate coverage of basic food needs where they are most acute. 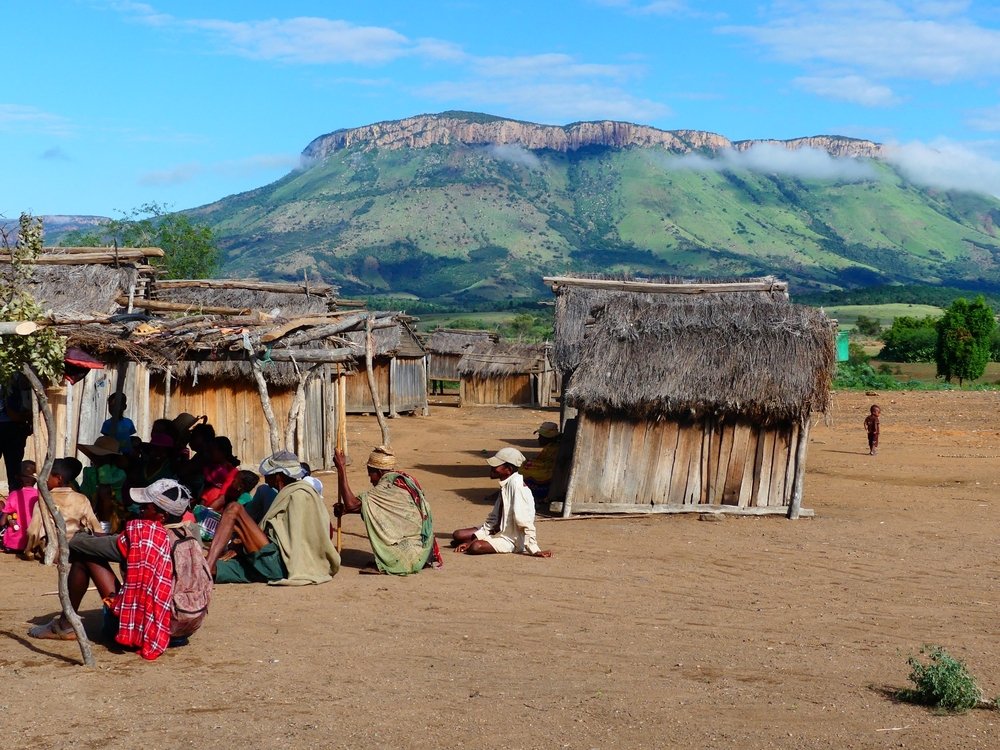 According to the WFP and the Malagasy government, in January 2021 the prevalence of global acute malnutrition among children under five in the three most affected regions (Androy, Anôsy and Atsimo Andrefana) was more than 10%, the second highest rate in the Eastern and Southern African region. 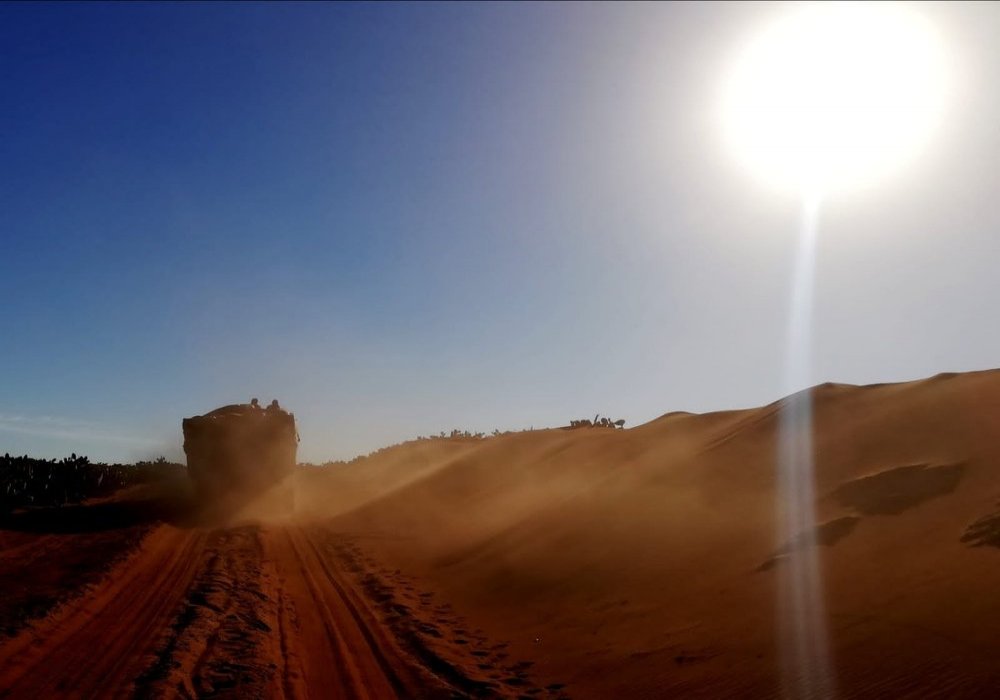