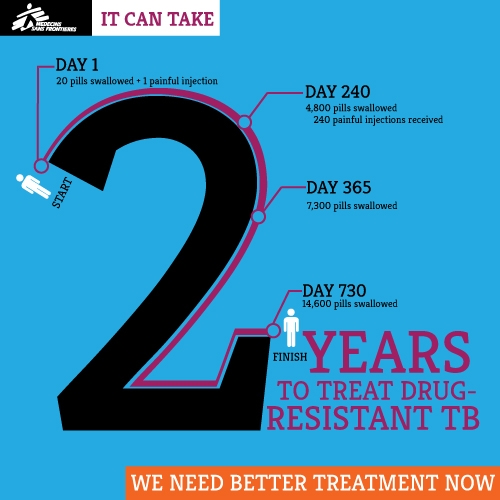 A new briefing paper by Médecins Sans Frontières/Doctors Without Borders (MSF) outlines why the alarming spread of deadly strains of drug-resistant tuberculosis (DR-TB) is one of the biggest global health threats we face today. It calls on governments, pharmaceutical companies and researchers to mobilise urgently to save more lives and find new treatments to stem the virulent disease. Jump to TB Manifesto video

Every year, around eight million people worldwide fall ill with tuberculosis (TB) and 1.3 million people die from the infectious airborne disease.   In Ireland in 2013, 384 cases of TB were reported* , representing on average one person being diagnosed with the disease every day.   TB is curable, but an inadequate global response has allowed drug-resistant TB to take a hold.

Around half a million new cases of multidrug-resistant TB (MDR-TB) occur every year and are reported in virtually all countries worldwide, with even harder to treat forms reported in nearly 100 countries. Now these deadlier DR-TB strains are spreading from person to person. Yet today, no matter where you live, there is no means to treat it effectively.

10,000 pills, 8 months of daily injections, only half of patients cured

The growing use of a new tool for rapidly diagnosing MDR-TB is helping to identify more and more patients. But, for these people, standard TB drugs don’t work, and doctors must turn to long, complex and expensive treatments that only cure half the patients at best.

For these terrible odds, people face a two-year ordeal which involves swallowing more than 10,000 pills and enduring eight months of daily injections. The treatments make many people horrendously ill, with side effects that range from nausea and body pain to permanent hearing loss and psychosis.

In spite of their utter inadequacy, the drugs alone cost health providers around US$4,000 per person, not including costs for the long periods of care and the management of side effects.

The inadequate and costly treatment is severely undermining the global response; with only one in five people who need it receiving DR-TB treatment today, the airborne killer is left to spread indiscriminately. The severity of the crisis has led DR-TB patients and staff worldwide to come together to call for urgent improvements in the ‘Test Me Treat Me DR-TB Manifesto’ – see: msfaccess.org/TBmanifesto

“Let us accept the fact we are faced with a TB epidemic,” says mother of two from Swaziland, whose daughter died of DR-TB and whose son is now infected with the disease.

“We need to get together and fight for our survival so that there can be a future for the next generation, because if we give up the fight now, the children are finished.”

Although two new TB drugs have been released recently – the first in 40 years – doctors and patients are years away from getting the revolution in treatment they need. To be effective, TB drugs have to be used in combination, and clinical trials combining the new drugs are not yet underway. MSF’s comprehensive briefing paper draws on its first-hand experience working on the frontline of the DR-TB crisis, and describes the need to diagnose and treat more people now, and the urgency for research to find new, much shorter, more tolerable and more effective treatment combinations to unlock the global DR-TB health crisis.