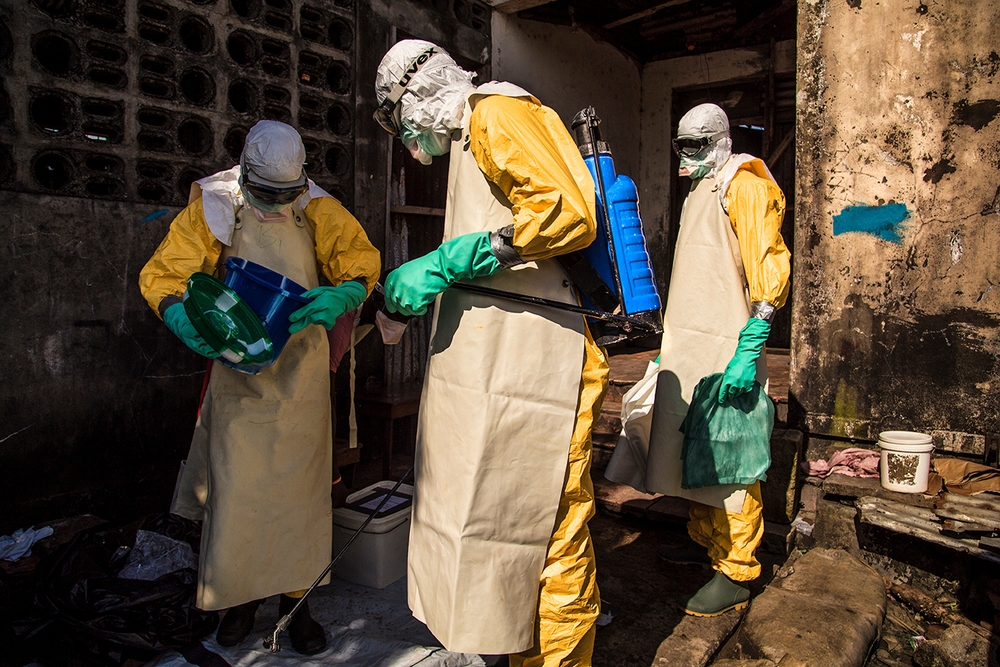 Ebola: A day in the life of a chlorine sprayer

The team collecting people who have caught Ebola – both living and dead – from communities in Monrovia face one of the most challenging tasks in the fight against this deadly virus.

The phone rings. There is a dead body in the neighbourhood and, as with every death in the city of Monrovia at the moment, Ebola is the suspect.

The body of an Ebola victim is extremely contagious and so it needs to be collected, and the home and belongings of the victim disinfected.

This task falls into the hands of B Sunday Williams, a Liberian chlorine sprayer, and his colleagues in Médecins Sans Frontières/Doctors Without Borders (MSF)’s outreach team in Monrovia. 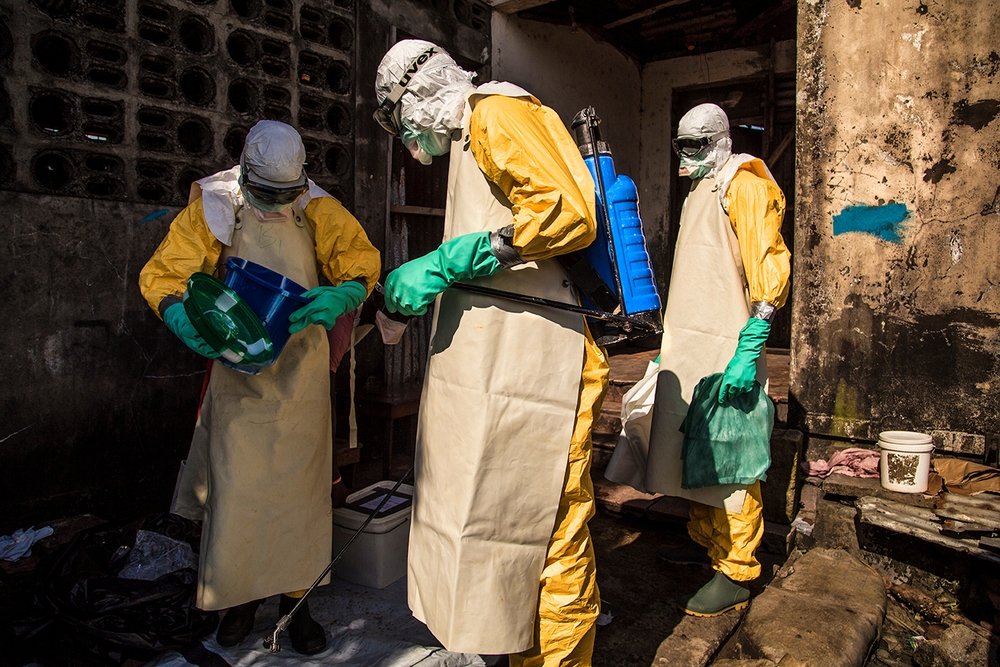 Agus Morales/MSF
B Sunday Williams is the sprayer of the MSF burial team in Monrovia. He disinfects the hosue before the rest of the team goes inside.

Caring for the community

“When I began this job I had lot of fear in me,” says Williams. “When I heard about Ebola, I was frightened; I was afraid to take a body. But now I’m no longer afraid, I feel protected.”

The outreach team is multi-disciplinary, made up of nurses, health promotion officers, water and sanitation experts and, of course, sprayers.

They take care of the entire community, both the living and the dead; transporting suspected Ebola cases to the treatment centre, disinfecting the homes of Ebola patients, providing information on how those left behind can protect themselves, and safely and respectfully removing the dead.

Williams and the other seven members of the team climb into a four-wheel drive vehicle outside MSF’s Ebola case management centre in Monrovia and head for Paynesville.

This suburb is on the outskirts of Monrovia, towards the airport and has been hit hard by Ebola in recent months. A small crowd, half curious, half agitated, waits for the team at the gate of the house. The team don’t blink an eye – they are used to the attention.

“Sometimes when we go outside, people are afraid of us, but we tell them they shouldn’t be,” says Williams. “I don’t touch anybody; I do everything to protect myself. Even when I’m wearing the personal protective equipment, I feel comfortable, protected.” 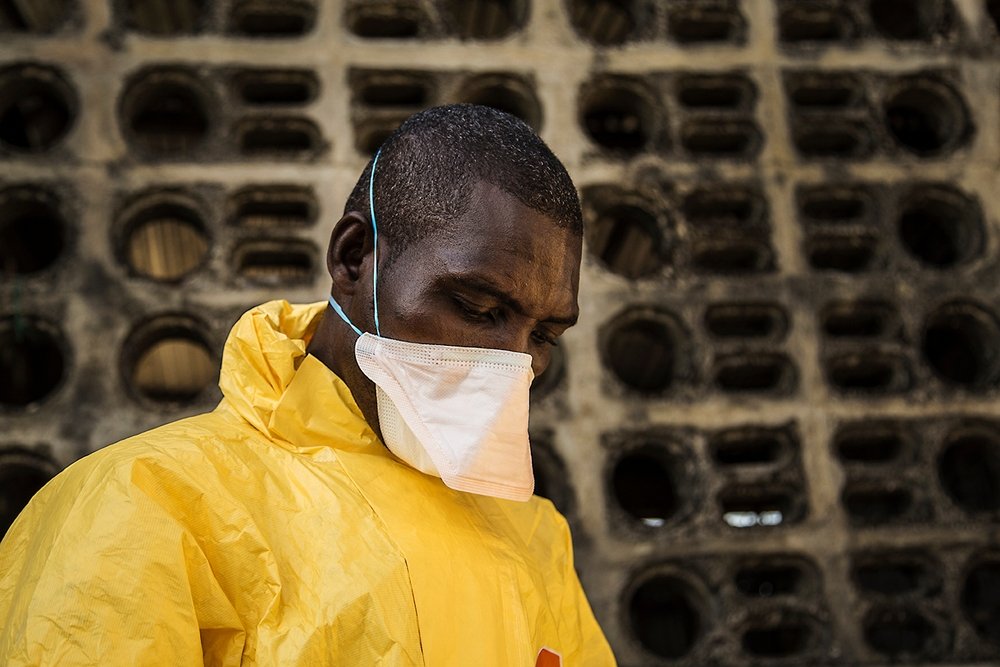 Agus Morales/MSF
B Sunday Williams is the 'guardian' of the outreach team: he protects them while disinfecting the houses where Ebola is suspected.

Guardian of the Ebola team

After talking to the family, Williams and the others put on their protective gear. The crowd continues to look on.

Even inside his yellow suit, Williams is easy to distinguish because of the blue bottle filled with chlorine he wears on his back.

“Sometimes when we go to disinfect a house, the place is dark,” he says. “You have to protect yourself and your teammates, because if the sprayer doesn’t do his job properly, it can harm the entire team.

“When one person is in touch with the virus, everyone’s safety is at stake.”

Williams’ role, one that did not exist in Liberia before the outbreak, is unique. He walks in alone while the rest of the team waits outside, methodically spraying the victim’s body as well as the surroundings with a 0.5 percent chlorine solution.

This kills the virus and makes it safer for the others to do the job of removing the body.

“The sprayer should be the one to make sure that the place is actually safe before the team enters the house,” he says.

Only when he comes back out, having been careful not to touch anything that he has not sprayed, do the others go in.

It is as if he is their guardian, providing them with safety and helping to ensure that they do not themselves become victims of the virus. 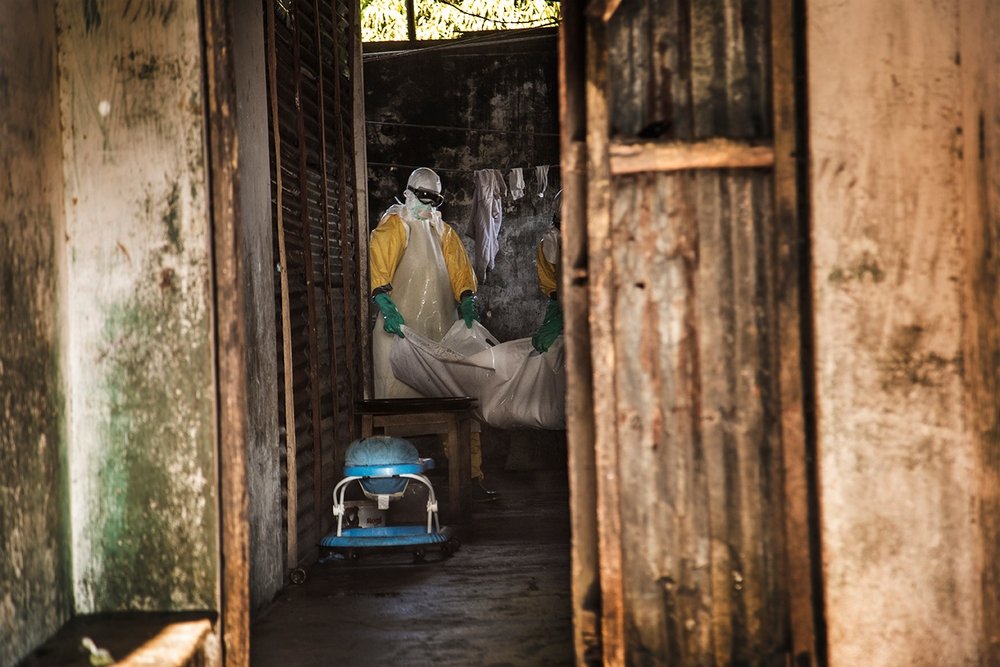 Agus Morales/MSF
The MSF outreach team collects the body of an 18-month-old baby in a house in Monrovia. Ebola is suspected.

The deceased is a baby of just 18 months and one of the workers must take a saliva sample from the inside of his mouth to confirm that the death was from Ebola.

His tiny corpse is then placed inside a white body bag, which is again sprayed with chlorine. When the bag is carried out, the crowd falls quiet, a silence interrupted only by the wails of grief from the family.

Once the work inside the house is done, the members of the outreach team must be disinfected repeatedly constantly as they remove every layer of their protective equipment.

It is a slow process and one which must be performed in exactly the same, methodical way every time.

The body is put in an MSF vehicle and taken to the morgue. There can be no traditional burial rites, which involve washing and touching the body because of the risk of infection.

This makes an already heart-breaking situation even worse for the family. They will never see the baby again.

This is but a few hours in the lives of the MSF outreach team. It is one of the most challenging tasks in the fight against Ebola, and Williams has no doubt about its importance.

“When I was asked by MSF to join the outreach team, it was not so easy to take a decision,” he says. “But little by little, with strength, you can make it. Today, I have a passion for the job.”