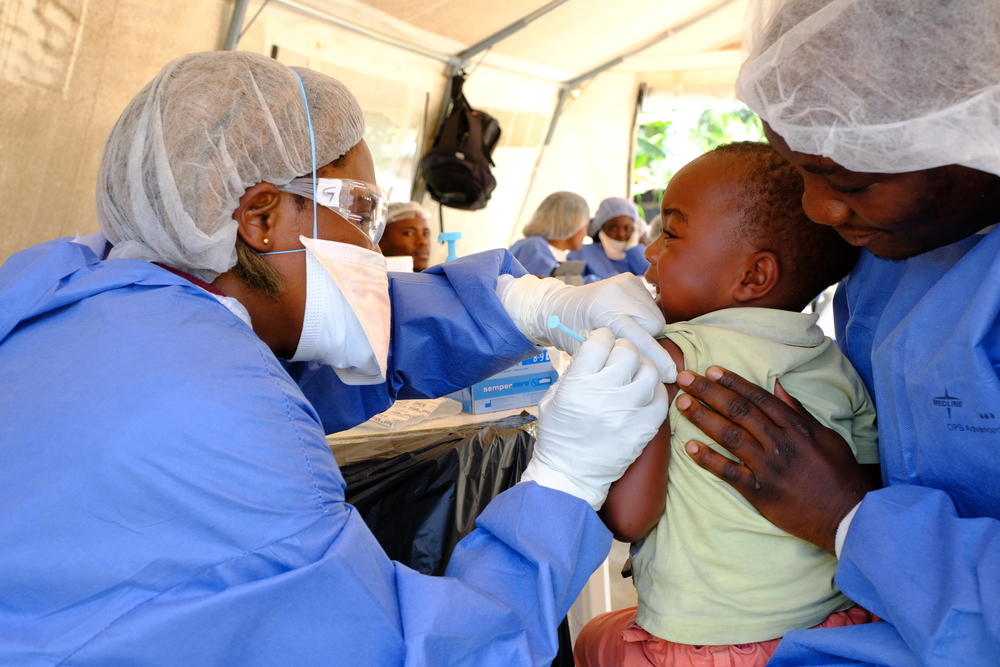 Ebola: Six things you need to know about the “promising” vaccine

Beni is one of the recurring hotspots of the ongoing Ebola epidemic in the Democratic Republic of the Congo (DRC).

For more than a year, the emergency response to Ebola has been in full swing in the city, found in the DRC's eastern province of North Kivu.

On the ground from the early days of the epidemic, MSF has recently started supporting a vaccination campaign – a promising tool in the fight against the virus.

However, reaching the right people in time is a complex endeavour.

1. The vaccine works for 95 per cent of people

In Kimbangu, a community in the southwest of Beni, Esther only winces lightly when a doctor from the vaccination team injects the trial Ebola vaccine – known as rVSV-ZEBOV – into her upper left arm.

Justin (not his real name), her two-and-half-year-old son, bursts into tears when he sees a new syringe being filled, only calming down a few minutes after receiving his shot. 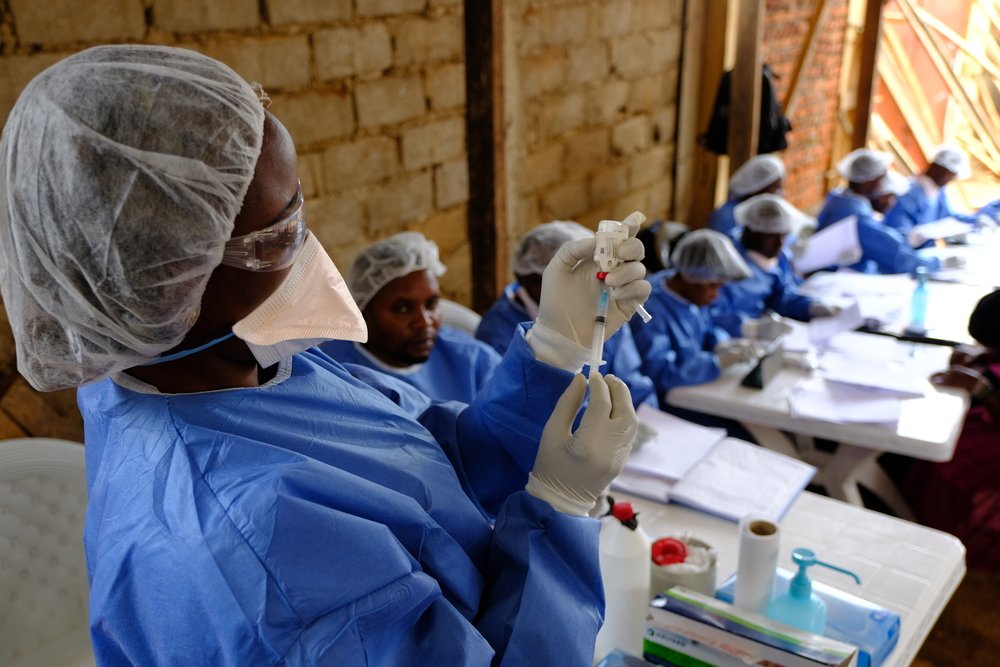 The vaccine feels painful in the arm, but side effects are mostly mild. But, most importantly, early results show the vaccine provides effective protection against Ebola for 95 per cent of participants after 10 days.

Esther and her son came to one of three vaccination sites set up by MSF every day in Beni, part of the latest combined efforts to contain Ebola alongside teams from the Ministry of Health and the World Health Organization (WHO).

“There were confirmed cases of Ebola in my neighbourhood and a surveillance team told me that we should get vaccinated as we could likely have been in contact with them,” says Esther.

2. Vaccination teams need to be a well-oiled machine

Setting up the vaccination sites is a highly coordinated routine.

A series of plastic tables are lined up next to a waiting area, registration and consent forms put into place, and the vaccination team put on their protective gowns. 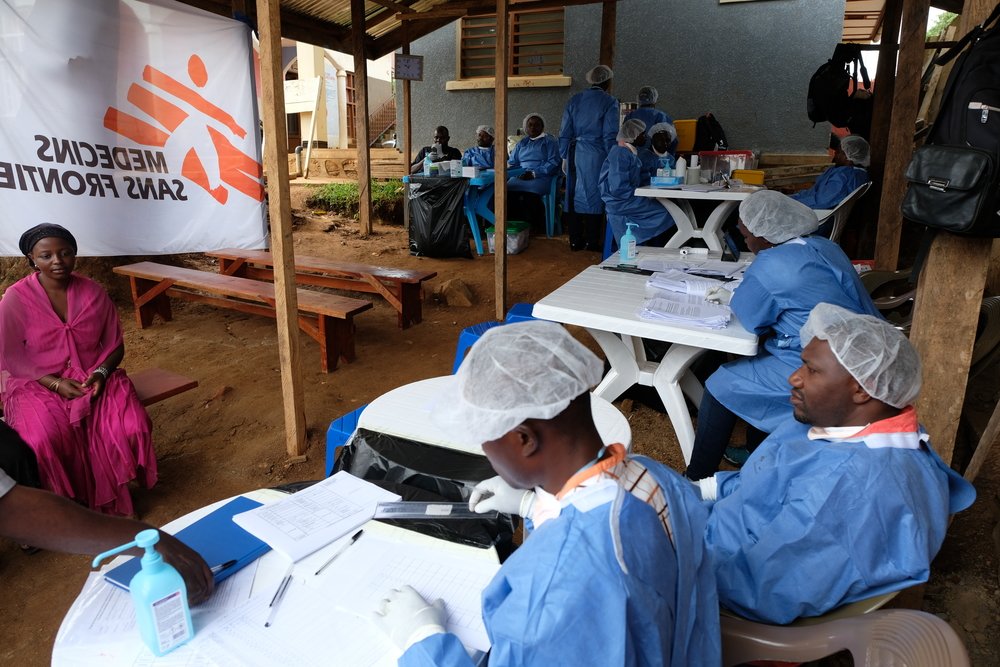 Then, an MSF vehicle delivers the first vials of the vaccine in a cooled container and a member of the surveillance team starts identifying people who are eligible to take part.

While Ebola cases have been on the decline in Beni since late August 2019, every day there are still new suspected or confirmed patients admitted to isolation areas in local healthcare facilities or the MSF-operated Ebola treatment centre.

Twice already, in December 2018 and June 2019, the outbreak seemed contained, only to soar again with even higher numbers.

3. Reaching patients in time is still a challenge

Despite the availability of a vaccine to prevent infections and new treatments for confirmed patients, over 3,100 people have been infected since the beginning of this outbreak – now the second-worst in history. 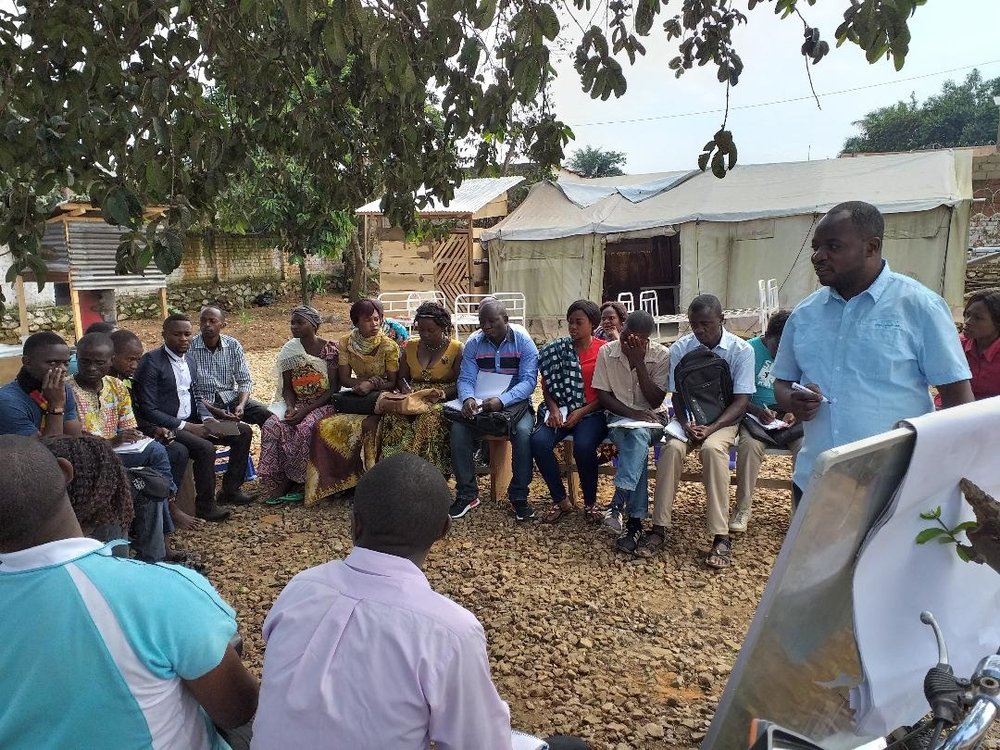 Laetitia Martin/MSF
Every day in Beni, our teams mobilise community leaders, influential community representatives and the population around the Ebola virus disease. That means providing reliable information, answering questions and considering people's recommendations. Putting patients and communities at the centre of the response is key to tackling the Ebola epidemic, which is still not under control.

Patients showing symptoms such as fever, diarrhoea or vomiting are highly infectious and should be isolated and treated as fast possible.

However, across North Kivu, the average time from onset to diagnosis is five days, during which patients often travel to and visit several health centres.

Identifying and vaccinating potential contacts like Esther and Justin is therefore crucial to protecting people at risk and poses one of the major challenges in containing the outbreak.

4. A better vaccination strategy is needed

The three MSF-teams in Beni supported 700 vaccinations in the first two weeks of the programme alone. Now, over 51,000 people in the area have been vaccinated by all the organisations involved in the Ebola response here.

Nevertheless, due to the restricted use and the “trial” status of the vaccine, the vaccination strategy in North Kivu is currently limited to a “ring approach”.

This means only direct and indirect contacts of suspected and confirmed Ebola patients, or frontline workers like doctors and humanitarian staff, are currently able to receive the vaccine. 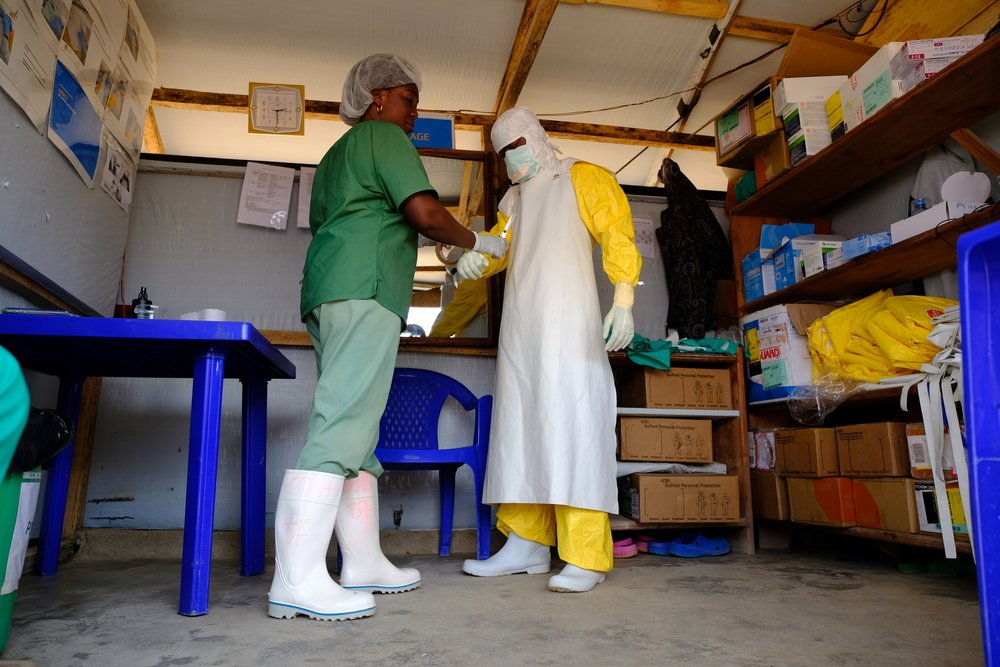 Samuel Sieber/MSF
A staff member prepares to enter the high-risk zone at the Ebola Treatment Center in Beni. MSF took over the well-equipped structure from ALIMA to ensure continuous capacity.
However, throughout the outbreak, surveillance teams have only managed to trace a quarter of confirmed and potential contacts of Ebola patients, meaning the majority remain unidentified.

To improve this, MSF has called for an international and independent committee to evaluate and extend the strategy, as well as to manage vaccine supplies with more transparency.

“We would like to broaden our vaccination strategy and be more flexible in responding faster to areas with confirmed Ebola cases,” said MSF activity manager Joseph Musakane.

“Currently we are limited to a fixed number of daily doses and working in pre-allocated vaccination sites.”

5. Building trust with communities is vital

Persisting fears and misconceptions around the vaccine in local communities have created an additional challenge for vaccination teams.

“Many people believe the shot causes impotence, mental illness, or even Ebola itself,” said Joseph MbokaniI Kambale, a community health worker with the national Ebola response.

“Others mistake Ebola symptoms for another disease or suspect poisoning. We often need to convince people to come and get vaccinated.” 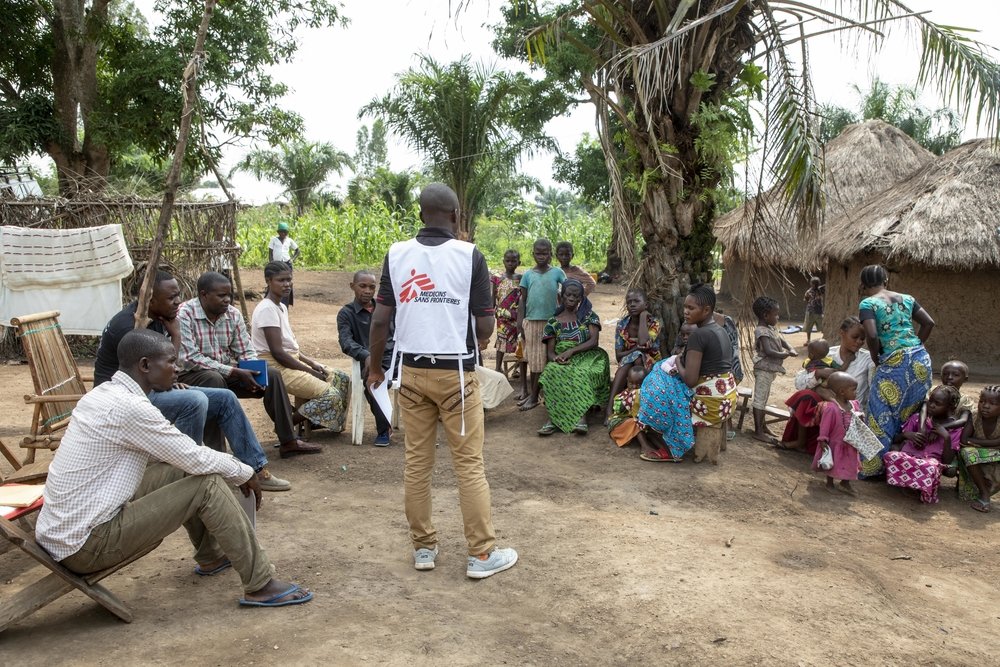 Pablo Garrigos/MSF
MSF Health Promotion Outreach team visits the communities to raise awareness about Ebola disease and to build a strong and trustly relationship between communities and health workers.
This means making treatment more accessible and building trust with the local community has proved incredibly important, particularly early in the outbreak.

At first, our teams were working at large centralised treatment centres for suspected Ebola patients but soon realised that these specialist isolation areas were much more effective when closer to the communities they were set up to help.

“We started integrating small isolation facilities into six of the 18 health centres in Beni, where patients felt more comfortable to approach us”, said Tristan Le Lonquer, emergency coordinator with MSF.

At the same time, MSF is helping by strengthening each health centres’ existing services.

“We support ambulance services and patient consultations, maternity care and laboratory capacities, which are much-needed services at risk of being neglected during this complex Ebola response”, added Le Lonquer.

6. There is no simple solution

A second trial vaccine, requiring two doses given 56 days apart, has just been greenlit for use in DRC as part of an extended clinical trial. MSF is part of the global group leading the rollout.

However, in Beni, ending the deadly Ebola epidemic remains a complex task, while MSF has only recently taken over a large treatment centre with 13 isolation units for emergency care, three large isolation wards for up to 40 patients, and over 160 staff.

“Breaking the chain of transmission requires us to extend our vaccination approach, provide integrated isolation and treatment options, as well as have a central treatment centre available,” says Le Lonquer.

“We also have to support other healthcare needs and build up trust with the local community. We need to be present on all fronts to win the complex fight against Ebola.”

OUR WORK ON EBOLA >