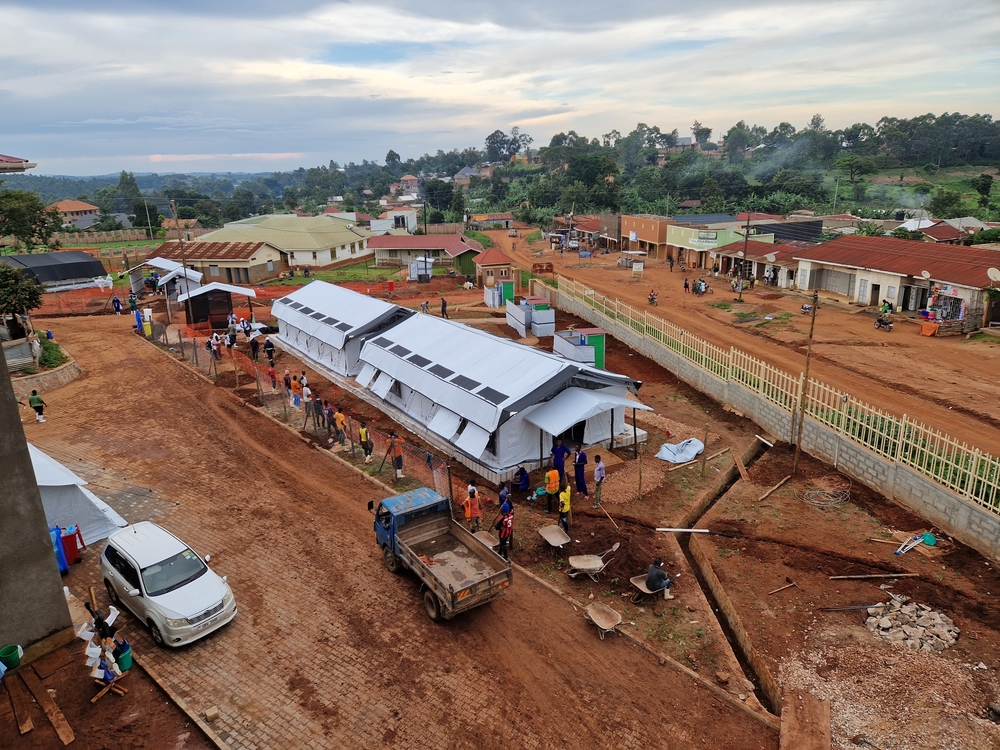 Ebola in Uganda: Four things you need to know

Since the declaration of the Ebola outbreak in Uganda on 20 September (and as of 2 October 2022), the Ugandan Ministry of Health has confirmed 43 cases of Ebola and reported 29 deaths (nine confirmed deaths from the disease and 20 probable). MSF is working with the Ministry of Health to set up an initial emergency response to help stop the disease from spreading further.

MSF has responded to various Ebola outbreaks over the past decade, including in West Africa (Guinea, Liberia, Sierra Leone) from 2014-16 and Democratic Republic of Congo (DRC) from 2018-20. These epidemics were caused by the Zaire strain of the virus and were followed by scientific advances, including the approval of two vaccines and an antibody treatment for the disease. The current outbreak in Uganda is caused by a relatively rare variant of the virus known as the Sudan strain, which raises a number of medical and operational challenges for the teams on the ground. The spread of the disease requires the rapid development of effective detection and treatment solutions in a country that has been relatively free of epidemics for the past decade. 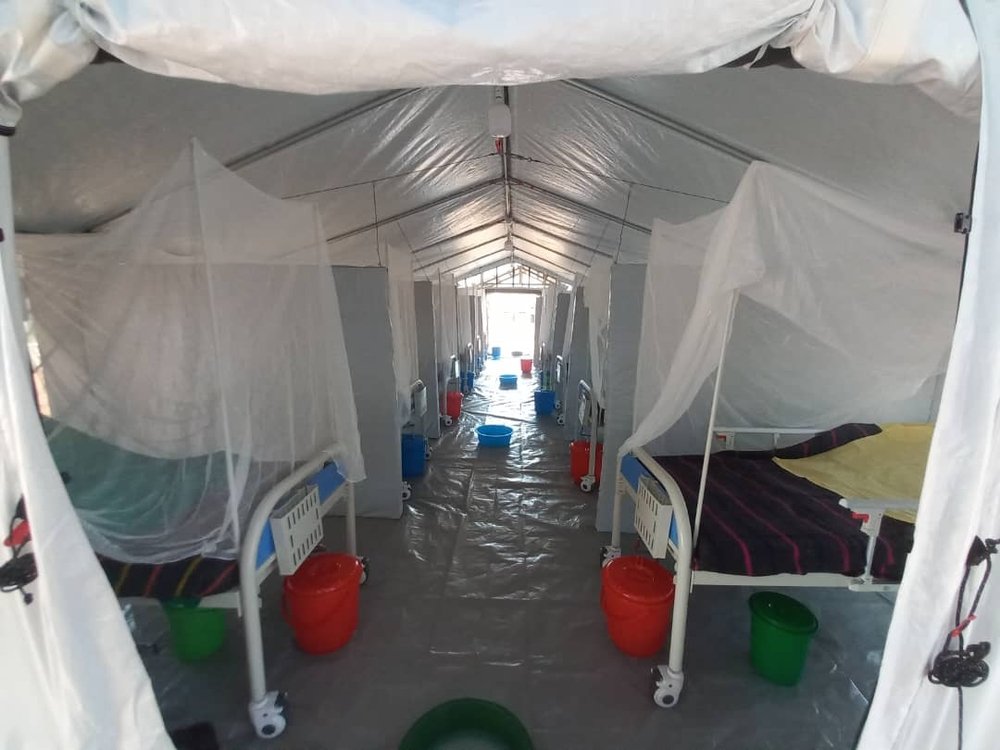 Augustin Westphal/MSF
In the context of the Ebola outbreak in Uganda, MSF has set up a 36 beds Ebola treatment unit at the Mubende hospital, for suspect and confirmed cases.

1. Are any vaccines available to tackle this epidemic?

There is no vaccine for the Sudan strain of the virus, which is responsible for the outbreak in Uganda. Discussions are underway at the World Health Organization (WHO) to determine which candidate vaccine could be deployed in a new clinical trial with a view to potentially getting it licensed for use. With no vaccine currently proven to be effective, much of the standard response needs to be rethought.

The rVSV vaccine, manufactured by Merck, is licensed for the Zaire strain of Ebola virus. In epidemics linked to this strain, it can be used to limit the spread of the disease as part of a "belt" vaccination strategy, vaccinating people who have come into contact with sick people, people who have come into contact with these people, and caregivers of patients. A second vaccine, manufactured by Johnson & Johnson, can be used during epidemics to protect people at risk of exposure to the virus, and can also be used as a preventive measure before an epidemic has been declared for people on the frontline of the response or those living in areas not yet affected by the epidemic.

With the current Ebola outbreak in Uganda, all health organisations involved in the response will have to do without this tool until trials have been conducted and an effective vaccine has been found. As with the clinical trials conducted for the Johnson & Johnson vaccine on the Zaire strain in DRC in 2019, Médecins Sans Frontières/Doctors Without Borders (MSF) is ready to assist in this research. 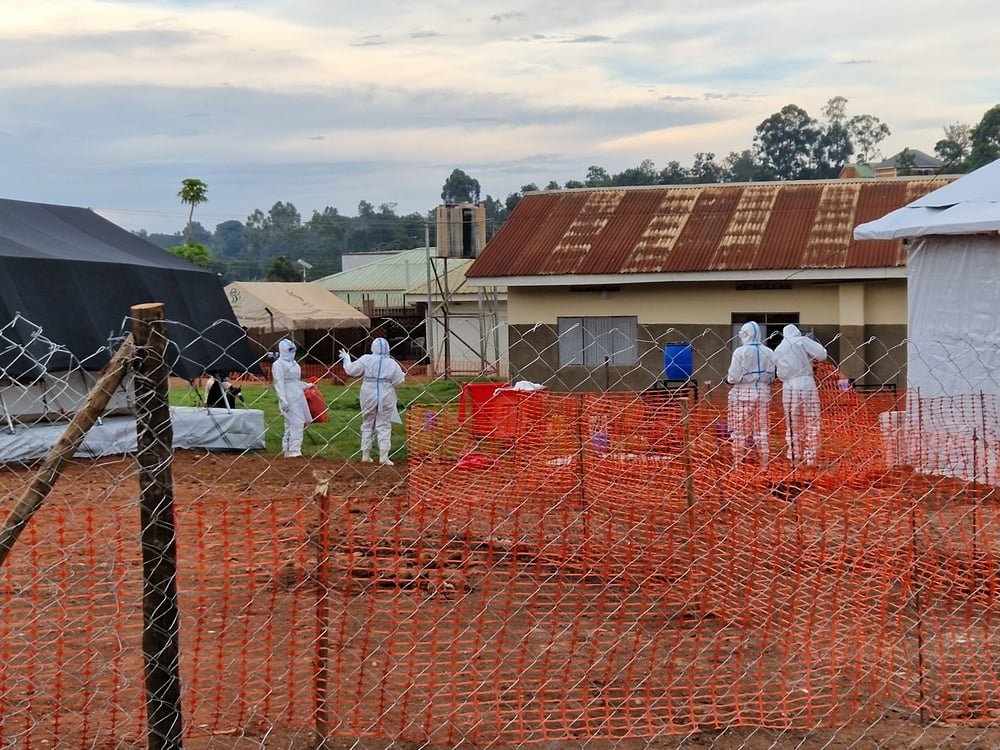 2. Is there a medical treatment available for the Sudan strain of Ebola?

Clinical trials conducted in DRC from 2018-19 have identified treatments based on the use of monoclonal antibodies, which are specific to a virus strain: Mab114 and regn-eb3. These allow a significative improvement in a patient’s chances of survival.

However, these antibodies are not effective against the Sudan strain of the disease. In the absence of this tool, treatment involves managing the symptoms of the disease and providing intensive care (including compensating for fluid loss, supplying oxygen, monitoring blood and cardiac parameters etc) in order to improve patients' chances of survival.

As in all Ebola epidemics, protective measures and infection control within health centres are of paramount importance.

"The protection of frontline health workers is a major concern for MSF,” says Dr Guyguy Manangama, MSF’s deputy head of emergency programmes. “We need to protect health workers to ensure the continuity of the health system by training them in infection prevention and control standards and by providing them with protective equipment."

Since the outbreak was declared, the Ugandan authorities have confirmed the deaths of two health workers, a doctor and a midwife. 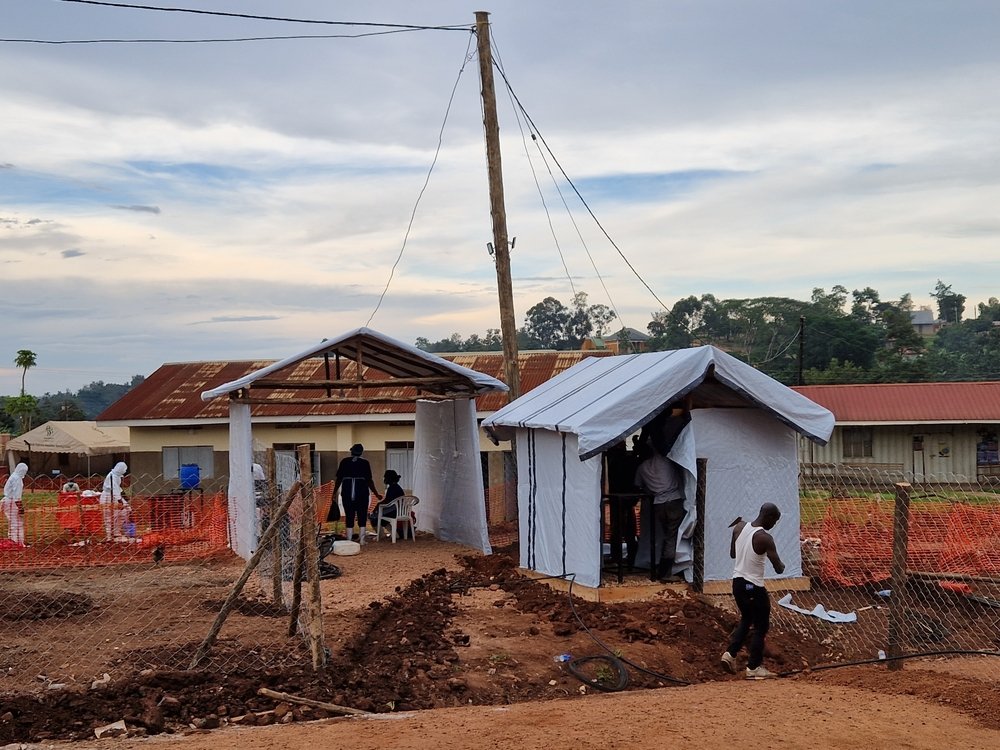 3. What kind of Ebola treatment facilities are available in Uganda?

During an Ebola outbreak, it is important that the medical response take place close to the affected communities. "We know that the earlier patients receive medical attention, the greater their chance of survival,” says Dr Guyguy Manangama. “As the initial symptoms of Ebola are not distinctive, being similar to those of malaria or other febrile viruses such as typhoid, the main issue is rapid access to information, diagnosis and care. In Ebola outbreaks, too many people still arrive at health centres with advanced disease or even die at home, infecting others in the process. This is what we need to avoid."

''As the initial symptoms of Ebola are not distinctive, being similar to those of malaria or other febrile viruses such as typhoid...too many people still arrive at health centres with advanced disease or even die at home, infecting others in the process. This is what we need to avoid.''

MSF recommends setting up small centres or isolation units where patients can receive first aid as close as possible to where they live. Meanwhile, larger referral centres can provide a wider range of care for patients in the advanced stages of the disease.

In past outbreaks, patients were often taken straight to large case management centres outside their communities, which in many instances led to rumours circulating within the community, hostility towards health workers and the rejection of the response.

MSF plans to support the response in Uganda by setting up small centres in affected sub-districts such as Madudu (the epicentre of the outbreak, located 20 km from the district capital Mubende), and setting up a larger 36-bed isolation unit with intensive care capacity for suspected and confirmed patients in Mubende.

MSF teams also plan to work with hospitals to enable them to become referral centres for health workers infected by the disease. 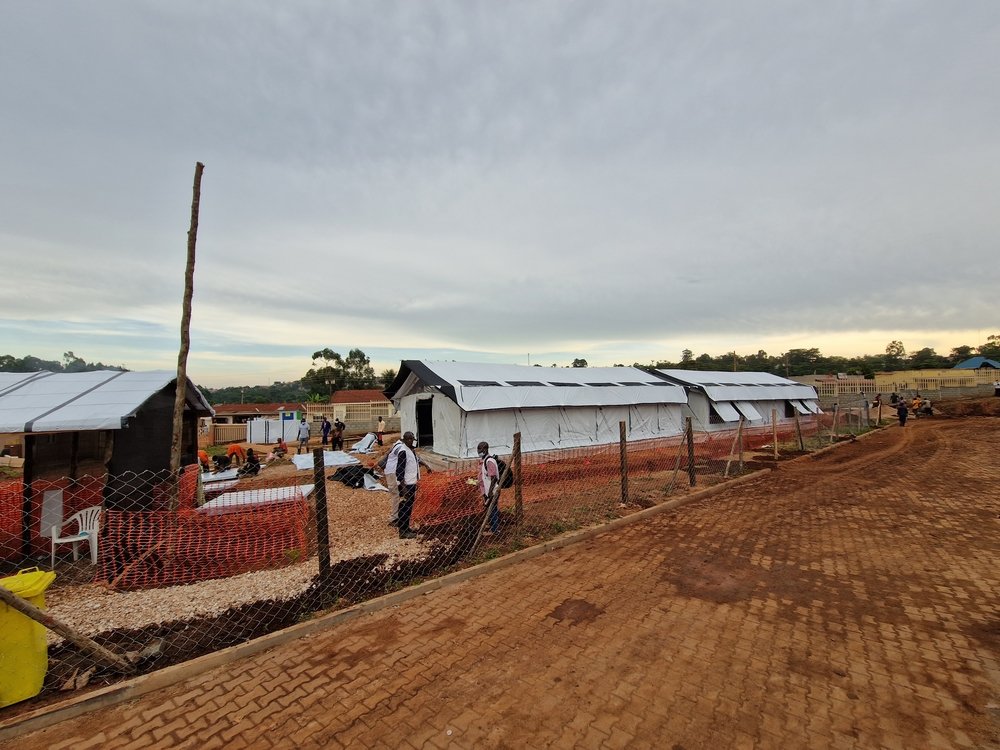 4. What is known about the spread of the epidemic?

To bring an Ebola outbreak under control, it is essential to be able to rapidly detect infected people and identify their contacts, who may have travelled far from the outbreak’s epicentre. In the current outbreak, cases have been confirmed in five districts of Uganda, so patients and contacts will need to be identified and followed up across a relatively large area.

Although the outbreak was officially declared on 20 September, a number of suspected deaths potentially linked to the disease were recorded as early as August in the affected region. As is often the case at the beginning of an Ebola outbreak, case-finding and contact-tracing lag behind the spread of the epidemic. It is vital to reconstruct the early stages of the epidemic as accurately as possible in order to screen people for the disease and provide medical care in the right locations. 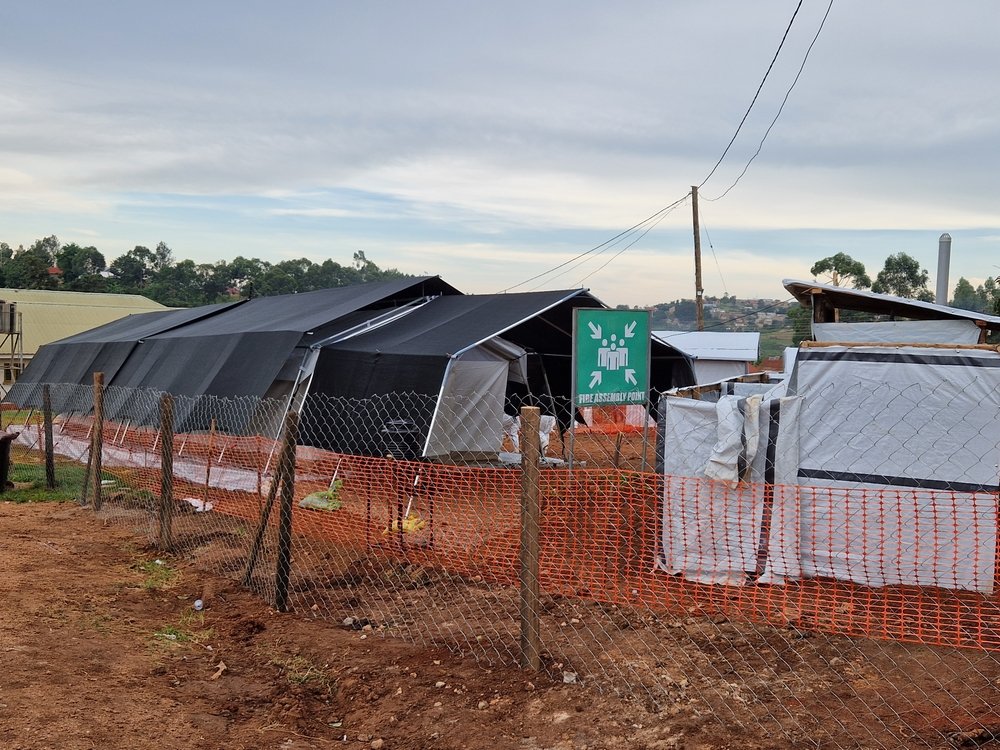 Augustin Westphal/MSF
In the context of the Ebola outbreak in Uganda, MSF has set up a 36 beds Ebola treatment unit at the Mubende hospital, for suspect and confirmed cases.

To tackle an outbreak effectively, it is also essential that people in affected areas have knowledge and understanding of the disease and are cooperative and involved in the response. Community-based surveillance activities and contact-tracing are needed to rapidly identify potentially infected people. Once identified, they and their families need to access appropriate healthcare or isolate themselves for 21 days. To facilitate this, social and economic barriers (such as the cost of transport to health centres, or costs linked to not being able to go out to work) need to be removed. This can be done by helping with transport costs, distributing food or kits to people self-isolating at home etc, and by offering psychological support to patients and their families.

IT tools can also facilitate real-time monitoring of the epidemic. During the 2018-20 Ebola outbreak in DRC, Epicentre (MSF's epidemiological wing) developed new tools to facilitate the coordination of epidemiological activities, including tools for systematic monitoring and collection of patient data, automated reports, and a web-based platform to visualise data on case management and the evolution of the epidemic. For the first time in an outbreak of this magnitude, the same surveillance tool was used at all patient sites, allowing for the efficient creation of a combined and comprehensive dataset on Ebola health facilities. MSF is ready to make these tools available to the Ugandan health authorities.

Ebola is a serious and often deadly disease with a mortality rate of up to 90 per cent. Initial symptoms are similar to those of many other illnesses: a sudden onset of fever, fatigue, muscle aches, headache and a sore throat. These initial symptoms may be followed by vomiting, diarrhoea, a rash, symptoms of kidney and liver failure and, in some cases, internal and external bleeding.