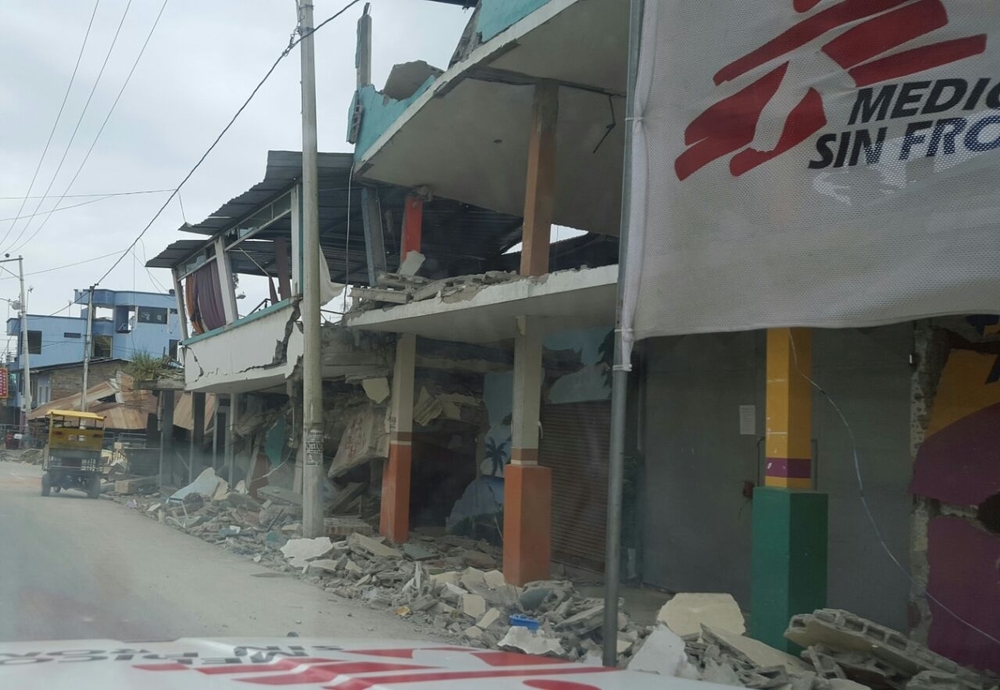 Ecuador: “People are very scared. Many have had to leave their homes”

Concha Fernández is the project coordinator for two of the MSF teams currently responding to medical needs in Ecuador following the 7.8 magnitude earthquake which struck the northeast of the country on Saturday, 16 April. According to the latest official figures, 525 people were killed in the earthquake.

The second team went by speedboat directly to Pedernales, in the Manabi region, on Monday.

Southern Esmeralda is a large region and the majority of buildings and much of the infrastructure was damaged by the earthquake. In some areas, between 70 and 90 percent of buildings were damaged. Fortunately in this area, there weren’t many deaths or injuries because people managed to escape their homes—many of them constructed from soft materials such as wood—before they collapsed.

People are very scared. Many have had to leave their homes. For example, on the island of Muisne, where 9,000 people lived, 3,000 have been evacuated to the mainland and are in four shelters. Portete Island, with a population of 322 people, has also been completely evacuated and people are currently living in two makeshift shelters in very precarious conditions.

In zones where homes did not collapse, people are erecting makeshift shelters on higher ground; they’re scared to sleep indoors or near the ocean. We have to keep in mind that there have been more than 400 aftershocks since Saturday and some have been very powerful. It’s also striking to see people who don’t want to leave their homes—in many cases these homes are extremely damaged and at risk of collapse—because they’re afraid they’ll be robbed of the few possessions they have left. These are mostly elderly people.

Psychosocial care in the aftermath

In southern Esmeralda, we’ve visited several areas to assess how we can respond. One of these places was Cabo de San Francisco, which we visited on Tuesday afternoon, and where we found 200 people living in makeshift shelters with almost nothing. They were very afraid and they asked to speak with our psychologist so we went ahead and began providing some psycho-social support with groups of women and children.

Our logistician was looking into water and sanitation issues and explaining to people how to best organize themselves while they were displaced, for example, by creating committees for key issues. In the end, we treated 13 people, including an asthmatic child and a woman suffering from an infected wound.

Part of the team that arrived in Pedernales went to the city’s main hospital and is ready to provide any donations of medical supplies necessary. The team arrived with a kit to assist 500 people, including first aid kits, basic medicines, etc., and are ensuring that the materials are stocked and available when needed. MSF staff and hospital personnel also went door-to-door in one of the most affected neighborhoods to provide mental health support and to try to convince people to leave their homes and go to area shelters.

Reaching Pedernales by road is almost impossible after the earthquake, but I plan on joining the rest of the team there soon.

For now, the most critical needs are mental health support, and water and sanitation. That’s why in the next few days, three psychologists and one logistician from the MSF team in Colombia will join us here. In Esmeralda, we will do small interventions in shelters in Chamanga, Muisne, Portete and Cabo de San Francisco.

Humanitarian assistance is definitely concentrated in Pedernales, but we think there might also be small neighborhoods around Pedernales where assistance hasn’t arrived. So we want to go to those neighborhoods to have firsthand information about the needs.

A third MSF team from Mexico has visited Manta, Porto Viejo, Chone and Flavio Alfaro, south of Pedernales. A fourth MSF team is on its way to Ecuador.