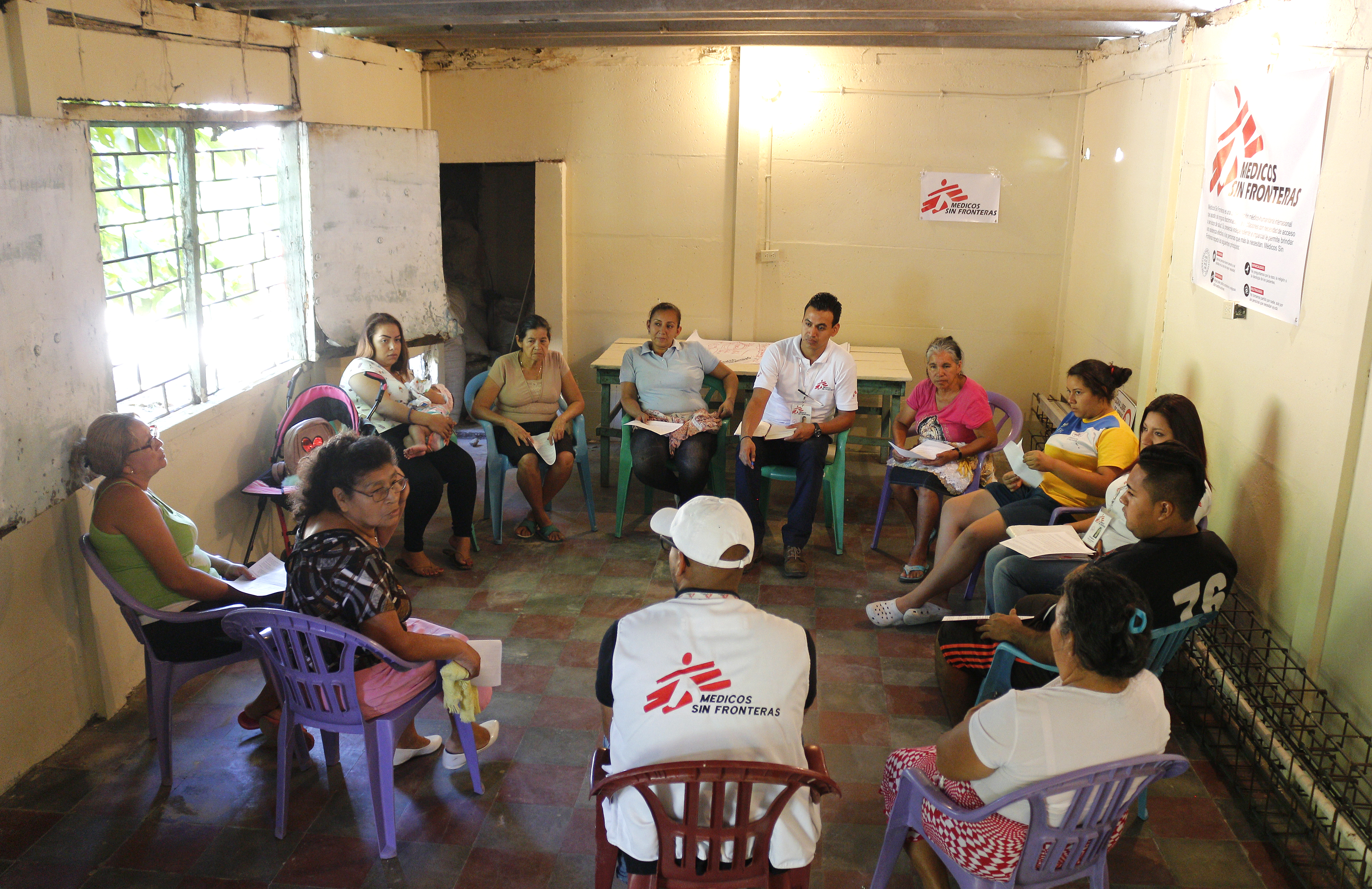 As part of its health promotion and community strengthening activities, Médecins Sans Frontières/Doctors Without Borders (MSF) facilitated the creation of its first health committee in the Peralta neighbourhood of San Salvador, the El Salvadoran capital. MSF’s community strategy is to establish more health committees in the municipalities of San Salvador and Soyapango.

For more than five years, the Peralta community in San Salvador was unable to access government healthcare services. The Ministry of Health (MINSAL) had suspended their services due to violent clashes between gangs and security forces. But now, MSF, other organisations and the community themselves have created the first local health committee to provide access to medical services.

“We were adrift for a while on the subject of our health. With the help of MSF and the creation of this committee, we have managed to keep the Barrio Lourdes Health Unit going with activities that benefit us. I am glad to know that we already know what to do in an emergency and how to prevent it, how to protect our health and how to maintain a clean community,” said Carmen, a member of the committee. 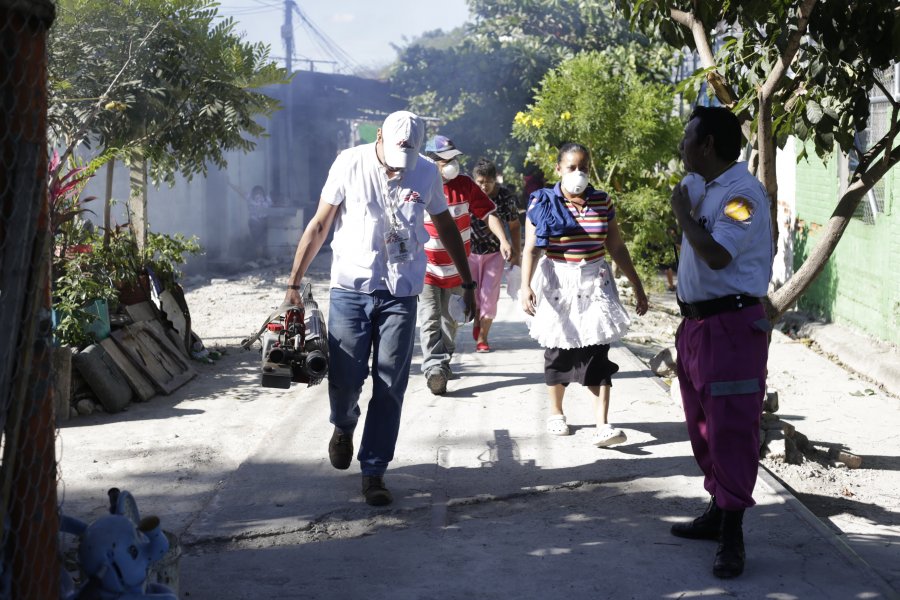 The health committees are MSF’s commitment to facilitating access to health, since they organise the community in health matters. To do this, health committees use a model proposed by MINSAL that establishes them as groups of people committed to local well-being, promoting healthy habits and disease prevention. In all, more than a dozen health committees are planned in communities across San Salvador and Soyapango where MSF is working.

“For MSF, the health committees are fundamental to overcoming the obstacles to accessing healthcare created by violence. Our goal is to facilitate access. We have seen that there is availability of all the parties involved,” said Stéphane Foulon, MSF Head of Mission in El Salvador, before members of the Peralta community health committee and representatives from health institutions.

The Peralta community is an area that had been excluded from access to healthcare because it sits within a gang territory. Community members had only limited access to health centres and struggled to receive medical attention.

In response to the community work by MSF health promotion officers, the participants of the health committee managed to develop activities such as water disinfection, fumigations, clean-up campaigns, mosquito-borne disease prevention days, first aid training and vaccination campaigns for dogs and cats, with the latter initiative being organised by the area’s residents themselves.

According to Flor Merino, MSF community health worker, the creation and strengthening of the committee has led to higher levels of participation among residents and a greater openness to new and future activities.

“With this health committee, MSF confirms that with joint participation, access to health in the communities is possible, helping to respond to the needs of a community that felt excluded due to the lack of medical care where vulnerable people live,” adds Merino.

La Peralta was created by families that were displaced by natural disasters and civil war, and were lured to the city by the possibility of finding work. The La Peralta community has been affected by violence, which has hindered access to health services. MSF teams began making regular visits to the neighbourhood four months ago and, little by little, the community, organised around a health committee, has managed to get the Lourdes Neighbourhood Health Unit restarting activities and visits to the area. MSF spoke with a group of residents, whose real names have been changed, about the problems they face.

Don Luís explains that the community was established in the 1950s when it was just empty land. “Now we have 222 houses. When the war started, more people began to arrive because they had fled and had come to settle here. First in small cabins, then gradually they built houses.”

“The main problem we have is a lack of sanitation and clean water. We do not have drinking water, there is no waste collection or sewage system,” explains Laura. She adds that, in general, the residents do not have problems visiting the health services at the nearby clinic, “but about five years ago the home visits for vaccinating and weighing children, or regular fumigations to control mosquitos were suspended. These were stopped because of the insecurity, because of the gang activities.”

Betty also lives in Peralta and explains the situation a little more. “We live in one gang area and the health unit is in another. We can go to the health unit, that is not a problem for us because we do not belong to any of that, but there are young women who are life partners of men involved in the clicas (small groups within a mara, a gang) and have not been able to get out; pregnant women who have not had prenatal care or children who have not had regular visits. Young men cannot leave the clinic neighbourhood either, due to the danger of them being linked to rival gangs.”

MSF community health worker Flor Merino explains that MSF helps the residents to arrange the necessary activities themselves “What we do is accompany them, help them to work as a team, promoting responsibility and cooperation.”

Gilmar Osorto, director of the Lourdes Community Health Family Unit, agrees that “if there is no strong community organisation in areas that are difficult to access, the health objectives cannot be achieved. It is important to strengthen the community; the more organised it is, the greater the chances of success for health projects in the area.”

As of May 2019, members of the health committee have been sworn in and its work is intended to be followed up by MSF and the Family Health Community Unit.

“There are always misunderstandings in a community, but with the health committee and the project to get potable water to the neighbourhood, we have become much more united. Our hope is also to be able to fix the civic centre, and have access to clean water and better healthcare. There are children who need psychological treatment due to their experiences in the community. They do not want to go to school. They do not want to leave the neighbourhood; they get bad grades and the teachers do not want them in their classes because of bad behaviour, because of the stigma of the neighbourhood,” says Ana María. She recalls a personal story, of a girl that she adopted. “The eight-year-old girl lives in her own world, no matter how hard we try. She does not have a mum or a dad. We treat her as if she were ours at home, but she is closed off inside her own world. Sometimes she understands, but then she gets lost. Her mother was murdered and her father died of natural causes. She was very young when her parents died, but if you ask her, she tells you everything as it happened.”

Laura says that another problem is the lack of opportunities for young people, who find it difficult to continue their studies in high school. “The problem is the neighbourhood and the difficulties that young people have to continue studying. From this street to another is one [gang]; from here to the next street, another. Those from here cannot go there and if they go, sometimes the other students attack them. I have a boy, he is15 and he stopped studying. They finish in the ninth grade and that’s it. Then they do nothing, they stay at home. Or they will sell sweets, fruit, cookies, whatever. Survival.”

Betty adds that they also need health services for their children. “As they are at that age, it would be very good to learn about sexual health and contraceptive methods. If they are girls, they can go to the Health Unit, but the boys cannot because men from the other gang are there. If any boy goes there, he will have a rough time. Girls do not experience any problems, but boys are in more danger. The girls who are closer to the gang members cannot go either. If someone ask our boys where are they from, they have to lie and say that they live in another neighbourhood. I always say to my son, ‘When they ask you, do not say Peralta’. This address is dangerous. I sometimes use my grandmother’s. When young people apply for jobs, if someone says they are from here, they discard their application, even if they are qualified. That is the position we are in. This community is a red point of reference for the police and here they have orders to react. Sometimes they mistreat the youngsters, even if they are not involved in gangs. The police are here to take care of children, even if they are from marginal areas. We forget that a beautiful flower can grow out of a puddle. From the thorns, roses rise.”

Between January and April 2019, MSF has carried out 3,511 medical consultations and 687 mental health activities. 3,275 people have participated in community health promotion and social networking activities in 11 areas of San Salvador and Soyapango where MSF works.