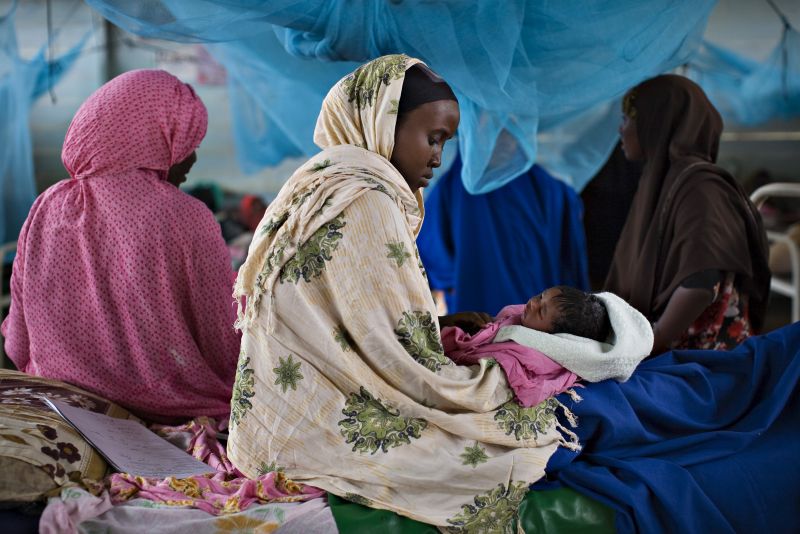 Escaping from war to an overcrowded refugee camp

Somali refugees, fleeing the fighting in their own country, continue to arrive in Dadaab, across the Kenyan border. The three vast refugee camps there are already too overcrowded to house them, and new arrivals have no choice but to construct makeshift shelters in the desert beyond the camps. MSF is helping the new arrivals by providing shelter materials and much-needed medical care while they wait for somewhere more permanent to live.

Click the banner above to hear Somali refugees tell their story

Jahara Ahmed Abdi, 35, recently crossed the border to Kenya with her husband and three surviving children, desperately seeking a place of safety away from the violence  that is tearing her country apart. The family had lived in the Somali capital, Mogadishu, but when Jahara’s eight-year-old son was killed by shelling, they realised it was too dangerous to stay. They paid US$150 – about half what a Somali family could expect to earn in a year – to be taken to the border, and found themselves in the arid desert near the refugee camp of Dagahaley.

Neighbours helped Jahara Ahmed Abdi and her family build a hut, while MSF handed plastic sheeting to make it waterproof ahead of the next rains.

Dagahaley is one of three refugee camps in Dadaab, in northeast Kenya. The camps were set up in 1992 to house Somali refugees, a year after the country had plunged into civil war. Originally built to accommodate 90,000 people, today Dagahaley has close to 300,000 inhabitants.

“Each week, we have 1,400 or 1,500 new arrivals from Somalia. This is making the camp very overcrowded, and it means there is less space and many more difficulties for those who are already living here,” says Mohammad Daoud, MFS’s field coordinator in Dagahaley. MSF has been working in the camp since 2009, running a 110-bed hospital and four health posts.With no end to the fighting in Somalia in sight, Daoud predicts that many more refugees will arrive. After travelling long distances, frequently on foot, refugees are often exhausted and suffering from a host of medical problems. The health needs in Dagahaley are huge, and MSF’s hospital and health posts are already overstretched. Currently 600 patients are admitted to the hospital every month, and staff carry out an average of 10,000 outpatient consultations.

New arrivals are forced to find somewhere to live outside the boundaries of the congested Dagahaley camp. When Jahara Ahmed Abdi and her family arrived in late October 2010, other refugees helped them build a hut to live in. MSF contributed plastic sheeting so they will have some protection when the next rains come. There are no latrines, and there is nothing but open scrubland behind their hut, and the threat of hyenas attacking their children is a constant concern. They have not yet received any food rations from the authorities, and are relying on neighbours to share what food they have.

At present there are 5,000 people living in the makeshift settlements outside Dagahaley. About 700 new families arrived between August and November 2010, all of whom are now living in dire conditions in makeshift huts and shelters. The area is prone to flooding, and when the first rains of the season started in early November, the temporary settlement was inundated. Many families lost their food rations and the few belongings they had.

The rainy season is likely to last until January. Living in such difficult conditions, without proper shelter, people’s health is expected to worsen. Stagnant water brings the risk of waterborne infections and diarrhoea, while children are at particular risk of developing respiratory tract infections. The MSF team is on-hand around the clock to help with the medical needs of new arrivals like Jahara Ahmed Abdi.

“We usually do a medical screening, we give them vaccinations, and we bring them to the hospital if necessary,” says Mohammad Daoud.

A new arrival from Somalia, exhausted from the journey, is looked after by one of MSF’s mobile team outside Dagahaley.

Daoud describes the plight of one recent arrival. “An old man approached us and told us that he had found a very sick man. We came upon a lone tree in the middle of nowhere. In the sparse shade was a tired-looking donkey, a donkey cart, two goats, five dust-covered children playing in the dirt, and a young man lying motionless on a blanket. The family had arrived that day, having travelled from Somalia. The young man’s wife had gone to look for help or for food, we weren’t sure. The young man tried to sit up, but couldn’t manage it without help. He hadn’t eaten for days. It was obvious he had a high fever and needed to go to the hospital. Fortunately, the old man offered to take care of the three small children until their mother came back.”

The following day, Daoud visited the young man in hospital. “He was still very ill, but the fever was gone. We went back to look for his family and found them with the old man, who had been just a stranger to them the day before. He had found them a small hut to sleep in and had shared his food ration with them.”


Since the flooding in November, when the rains began, the situation of the families living outside Dagahaley camp has improved slightly. Each family has a shelter, and some – but not all – parts of the settlement have been provided with clean water. There are still no latrines. For months people have been waiting to be relocated to a new camp – an extension to one of the existing camps – but this has already been postponed several times and is not likely to take place until January at the earliest. In November, MSF issued a press release calling on the Kenyan authorities and aid organisations to move the refugees to suitable accommodation immediately. Until that happens, the families continue to wait. And more refugees continue to arrive.