Ephraim is in one of the small counseling rooms of the MSF mental health centre in Hitsats refugee camp in northern Ethiopia. The arid and hot weather characterising this semi-desert area has given way to the respite of the cooler rainy season. A tropical thunderstorm is raging and the sound of water falling on the metal roof of the structure is deafening.

Although hard to hear through the noise, his voice is steady and his eyes show his clarity and determination. Being able to tell his story in detail, while remaining emotionally stable is an important step in his therapeutic process. “I was studying in 9th grade and I knew that I had to do military service soon. For some people it never ends and while you are in the military they pay you almost nothing,” he says.

For me it was clear that I did not have a future, not a future where I could freely choose what to do and be, and where I could provide for my family. So I decided to leave, like many other Eritreans.
Ephraim 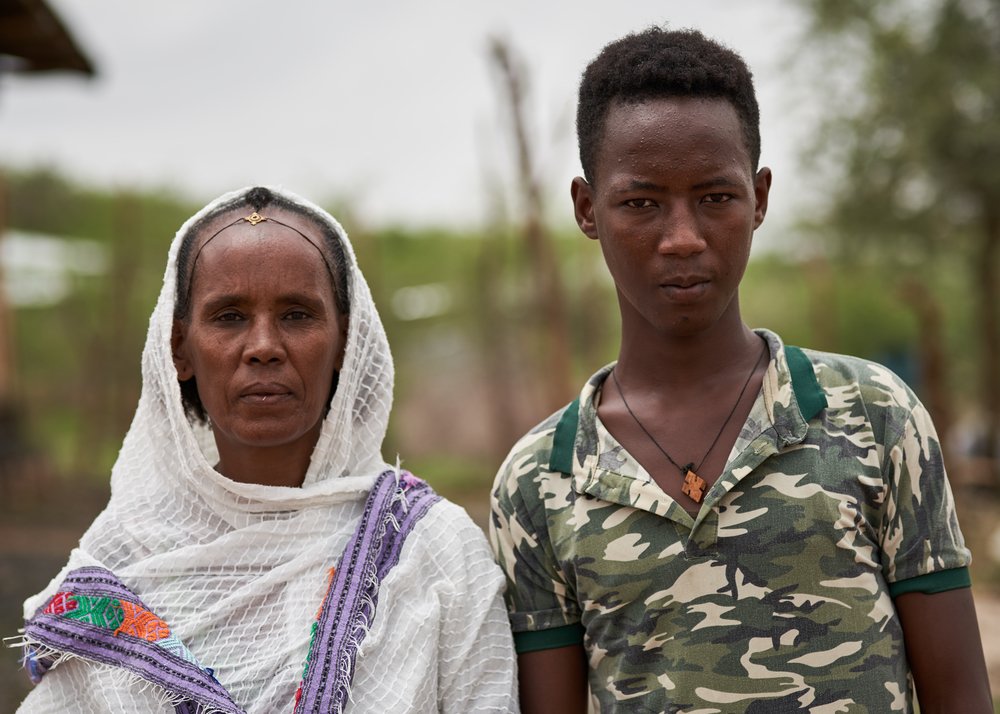 Afu, 49 years old, and her son Ephraim, 17 years old. Both are from Eritrea and are part of MSF's mental health program for refugees in the Tigray region

Each month, approximately 5,000 people flee Eritrea and many of them are teenagers just like Ephraim. The mandatory indefinite military service imposed on all Eritreans by an oppressive regime that deprives them of basic human rights is a major push factor for those who flee the country. For those who stay, the ‘choice’ is not without cost: arbitrary detention, violence and intimidation are known to be used against those who do not conform to the system.

Ephraim has had his fair share of abuse and detention, both in Eritrea and while on the search for a better life. At one point in his journey, he was caught in Sudan while attempting to reach Libya. With very little food and water, the 13 day long trip across the desert had almost killed him. Still, he was beaten and jailed for several weeks before being sent back to Eritrea where he was imprisoned again. “The prison in Eritrea was like a hole in the ground, with no windows and no lights. There were more than 80 people in the room with me. We didn’t have enough space to lie down so we spent every night sitting and taking turns to sleep,” he says. His mother managed to have him released and Ephraim tried to leave the country again.

The soldiers caught me at the border, beat me up badly and sent me back to prison. The injuries from the beating were getting worse. I started coughing and I couldn’t sleep because the floor was too hard and painful. I did not receive any medical help until things became pretty bad.
EPHRAIM

"At that point I was sent to the hospital. I was treated and sent back to the prison,” he concedes. Finally, on his third attempt, Ephraim managed to reach the refugee camps in northern Ethiopia.

Despite the extreme challenges, his story is not unique. Many other Eritreans have gone through similar ordeals. While experiences like these can surely cause physical problems, the mental health consequences are far more complex to identify and treat, and their impact can be devastating. In an effort to offer Eritrean refugees comprehensive health care, in 2015 MSF started a mental health project for the populations of Hitsats and Shimelba refugee camps. With around 2,300 new monthly arrivals, refugee camps in northern Ethiopia are one of the first destinations for Eritreans leaving their country.
Robel Araya, MSF Mental Health Supervisor in Hitsats camp, is very familiar with the situation faced by Eritrean refugees. “Most of the people that we see in the camps have been through traumatizing experiences. Leaving Eritrea is dangerous and some of them tried several times before succeeding. Many develop depression, anxiety and post-traumatic stress disorder linked to torture, violence and abuse. These conditions have a very negative effect on their lives. Our mental health services can help them get back on their feet,” he says.

MSF offers counseling, inpatient and outpatient psychiatric care and a wide range of therapeutic activities, including therapeutic discussions and psycho-education, where patients can discuss what they are going through and receive detailed information about their conditions and how to overcome them. Realizing that other people are experiencing similar problems helps them feel less isolated.

As is the case for the majority of humanitarian settings, children are one of the most vulnerable groups.

Around 40% of the camp population is under 18. Half of them are traveling alone or have been separated from their families.
Robel araya, msf mental health supervisor in hitsats camp

“Their situation is very delicate. They tend to suffer from separation anxiety and in some cases they had difficult or confusing early sexual experiences. Here we have activities specifically designed for them, like sport, drawing and theater sessions, as well as specialized counseling,” Robel Araya says. 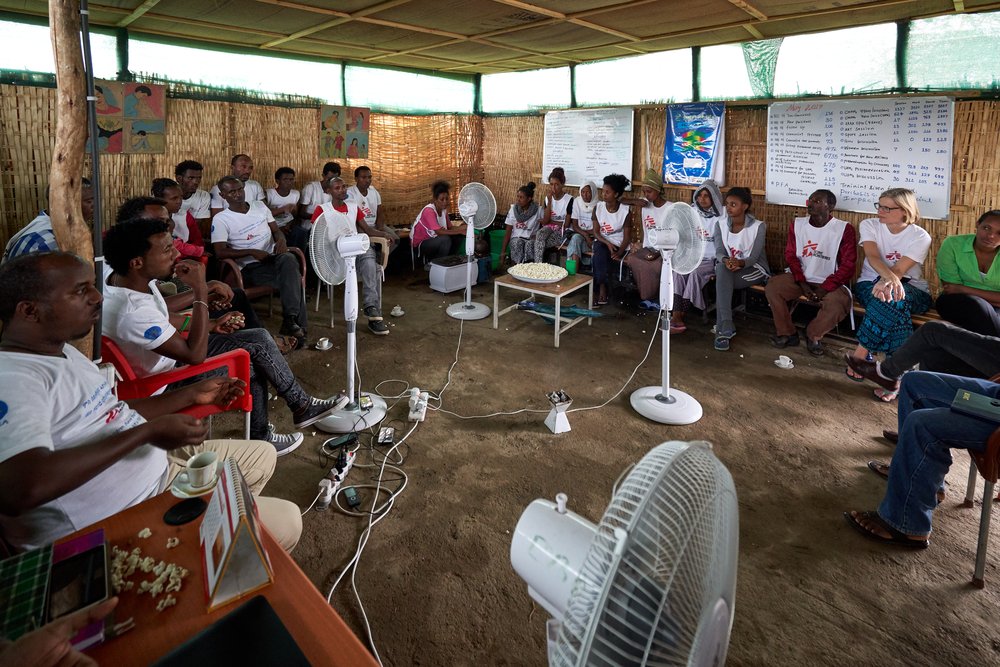 Gabriele François Casini/MSF
The MSF mental health team in Hitsats camp – composed of supervisors, counsellors and incentive workers – meets weekly to discuss the main challenges and issues that they encounter throughout their work with refugees and the host community.

The population in the camps is very transient. It is estimated that around 80% of Eritrean refugees will continue onwards through Sudan and towards Libya along the Central Mediterranean route within 12 months of their arrival in the Ethiopian refugee camps. The harsh living conditions in the camps, the lack of future perspectives, the desire to reunite with family members in other countries and the young average age seem to greatly contribute to these secondary movements.

“Our outreach activities in the community need to be constant because the population is always changing. The few who stay for the long term do so because they do not have the money for further movements. We also see people who tried to leave but were caught in Sudan or Libya, where they have seen and experienced horrible things, and were sent back to Ethiopia even more traumatized than before,” Robel says.

One of the main challenges is convincing people to seek support. The fear of being labeled as ‘weak’ or ‘crazy’ by the community prevents many from coming forward. “At first we encountered a lot of difficulties talking about mental health with refugees. So we decided to hire Community Mental Health Workers (CMHW’s) from the refugee community to provide door to door culturally appropriate awareness raising, education and de-stigmatization of mental health” he says. Every day, the CMHWs go from shelter to shelter and explain in detail how mental health issues manifest themselves, that treatment is available and why it is important to seek help. These sessions usually involve a whole family at one time, and in their native language.

Now we have a team of 26 very motivated CMHWs. It helps that many of them are our former patients and have experienced first-hand the benefits of counseling and treatment.
ROBEL ARAYAMSF Mental Health Supervisor in Hitsats camp

Being Eritrean, they know how to properly address the topic with the rest of the camp’s population. Their commitment comes from wanting to help their community,” Robel Araya explains. 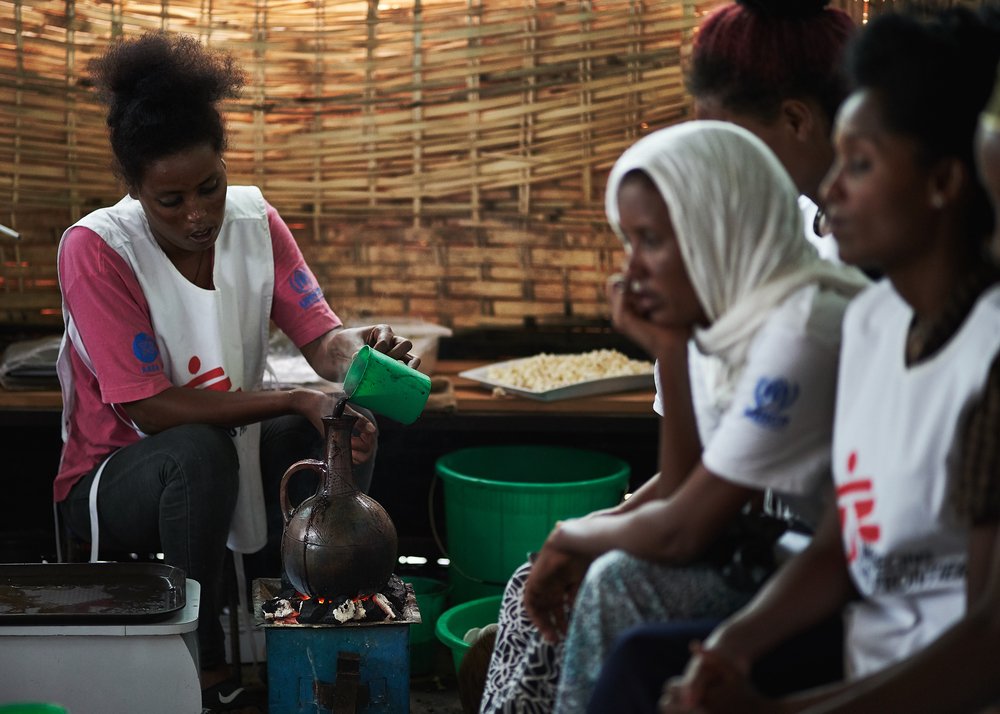 Simon is one of MSF’s CMHWs in Hitsats camp. Like the other members of the team, he is an Eritrean refugee and a former patient. “When I first arrived in the camp, I was not doing well. I was constantly reliving all the things that I experienced when first trying to cross the border, and while in jail, like the shooting, the torture and the abuse. The counseling really helped me get my life back together and I realized that this is something I could help other people with,” he says. “Working as a social worker in the MSF mental health program here in Hitsats camp is the only thing that gives me stability and motivation. Having a purpose has helped me not to think too much about further movements and the fact that I miss my family, my friends and my home. A lot of people here suffer from trauma and mental health problems. When I see that they get better also because of the support I provide through my work, I feel like staying here is worth it. Even if I didn’t manage to become a nurse like I was dreaming when in Eritrea, I am still able to help people and this makes me very happy,” Simon states proudly. 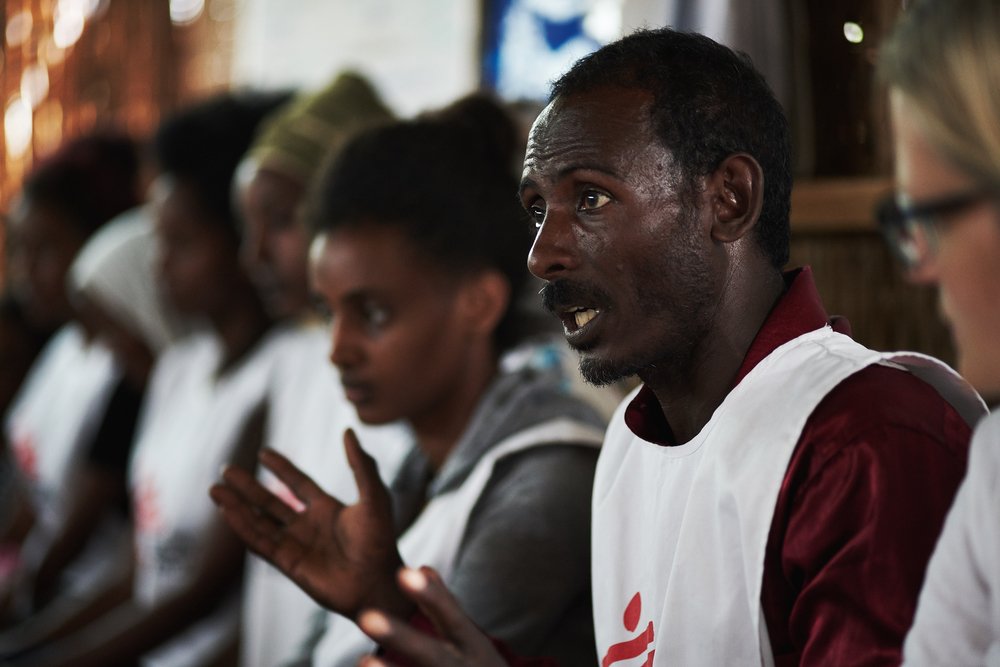 Hitsats and Shimelba refugee camps host respectively around 10,000 and 6,000 people. There, MSF provides around 2,800 individual counselling sessions and 3,600 psychiatric consultations per year. In addition to the mental health component, MSF offers primary and secondary healthcare services, including a 24/7 inpatient care in Hitsats refugee camp in partnership with the Ethiopian Administration for Refugee & Returnee Affairs (ARRA) and  ambulance referral services for emergency patients to the nearby Shire hospital. Reproductive health awareness and HIV prevention are also provided at community level.