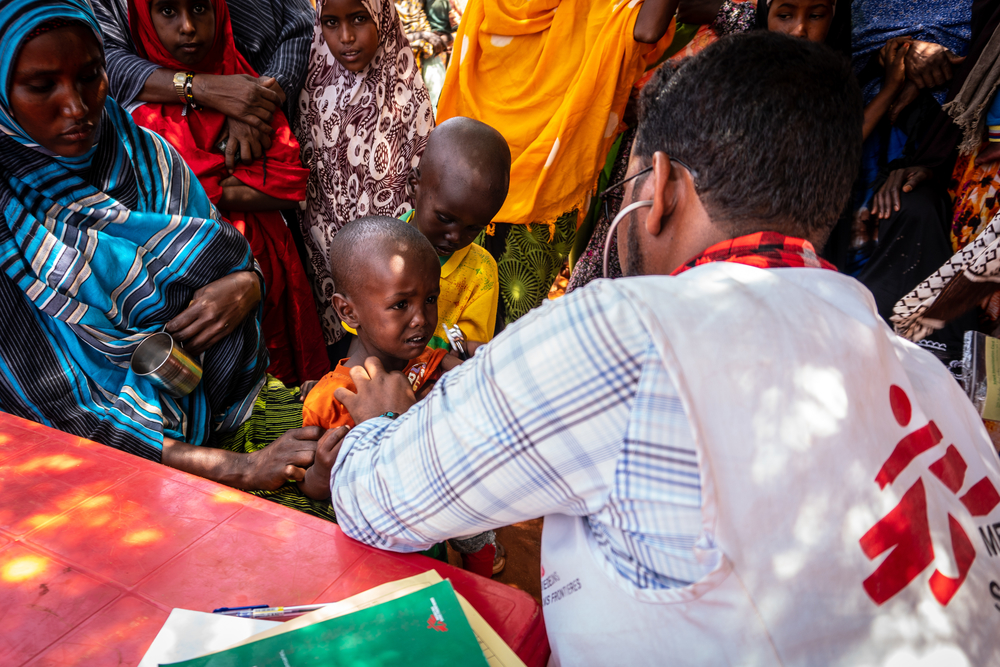 Early Thursday morning an MSF mobile clinic teams leaves Wardher town with two landcruisers in the direction of Ton-Habalan, a remote village a two-hour off-road drive away on red sandy roads. Three mobile clinic teams, made up of a nurse activity manager, an outreach supervisor, a nutrition assistant, a midwife, clinical officers, a pharmacist and drivers, provide primary health care in 17 remote locations in Doolo Zone, a vast and sparsely populated arid area in the most eastern part of Ethiopia’s Somali Region, bordering Somalia.

The vegetation along the route is dry in shades of grey-brown. The water scarcity is palpable all around. It is the end of March, the hottest and driest time of the year, when temperatures rise quickly over 40 degrees Celsius in the arid region. Hardly any vehicles commute, and from time to time, the convoy passes camels and goats. Over the radio, the driver of the first car frequently alerts the following car in Somali to drive cautiously, to not scare or hit the precious livestock. “Geel, geel, geel,” the driver warns for camels, “adhi, adhi, adhi,” for goats; only once does he say “gaariga” for an approaching car.

Pastoralist life in the Somali Region means moving from place to place, searching for water and pasture to feed the livestock. With hardly any access to reliable water sources unaffected by the arid climate, every aspect of life depends on the main seasonal rains, which are usually expected in April. The rains, when they arrive, collect in ponds called ‘berkit’, providing water for both humans and their animals. The rains also bring pasture to feed the livestock, who in return provide milk and meat, the staple food in the region. Camels and goats are central to Somali culture and survival in extreme and harsh climatic conditions.

Shortage of water is a daily reality in Doolo Zone. The MSF convoy occasionally passes a child or grownup with a yellow plastic canister, on their way to fetch water. A young boy stops the cars and asks for water to drink. He looks dehydrated and he still has a march of roughly 25 kilometres ahead to the closest not yet dried up berkit, to fetch water for him and his family.

Two hours later the team sets up their mobile clinic under a wide tree in the village of Ton-Habalan, a rare sight in the arid environment. The tree’s grey-green leaves provide shade to the team and their patients in the rising and increasingly stifling heat. The weekly mobile clinic is the only health service in the area, providing primary health care, antenatal and maternity care, child malnutrition screening, and distributions of monthly therapeutic supplement food to the families of malnourished children.

The village is home to maybe 420 households and many more pastoralist families live scattered in the surrounding bush, who come regularly to the village to trade basics like sugar, tea, water, tools and simple cooking items in exchange for animals, milk and meat. Many conversations among patients this morning circle around empty berkits and the anxiously-awaited rains, and what could happen if they fail again. 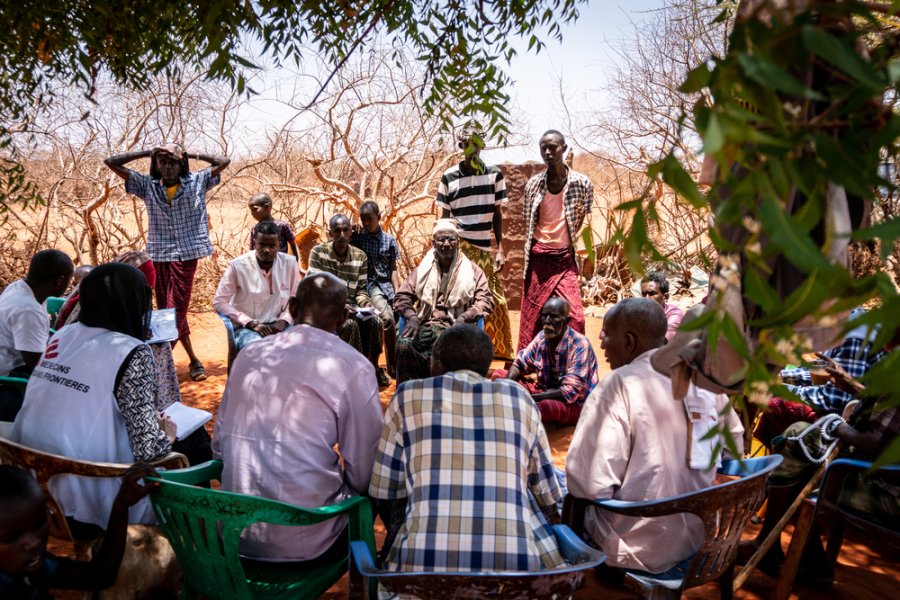 Heat and lack of water makes for difficult conditions

Thirty-eight-year-old Muhabba walked for two hours with her small son to the clinic. The previous week the boy was too sick and weak with fever and a throat infection to walk. The fever abated so he could make the long walk this time.

“The previous droughts eradicated much of our livestock,” Muhabba says, while she waits for her son’s consultation. “In the bush, we were all affected. Only a few animals survived. I am lucky I could raise some of my herd again. I now have 18 goats. It is all I have. We need the rains to survive. We are hoping for God to bring us good rains this year so that our animals and we stay alive.”

During the devastating drought in the Somali Region in 2017, 75 percent of livestock were lost. Since then, most livestock herds have not recovered to their size from several years ago.

MSF clinical officer Abdi Abdullahi Abshir checks on a little boy with tonsillitis. “Some of our patients walk as far as three hours to reach us,” he says. “Most health complaints these days are related to the hot and dry climate, the difficult living conditions in the bush and scarce and dirty water. Today the team saw mostly upper respiratory infections. We also treated many women with urinary tract infections.”

It turns out to be one of the busiest days since MSF started providing healthcare in Ton-Habalan in 2018. Communities increasingly know about the services and every week more patients come. By 2pm, the team has seen 208 patients, when it is time to conclude and pack up for the day, and return to the MSF base in Wardher town.

On the way back, the convoy picks up a former patient. “The young man has insulin dependent diabetes and was treated by MSF when we were working in Wardher hospital last year,” says MSF Nurse Activity Manager Maren. “Now we give him a ride whenever we pass him on his walk from his village of  Wal-Wal to Warhder. The remaining days of the week, he has to walk 12 kilometres to the hospital to get his daily dose of insulin, which needs to be cooled in a fridge. It is impossible for him to keep insulin at home as his village has no electricity.”

In this isolated region, even under normal circumstances, it is near impossible to get timely emergency care. The existing health care system does not cater to pastoralists, who are continuously on the move. Distances to health care are overwhelming and can be life-threatening. People have to move for hours on foot, or sometimes, but rarely, on camels.

Only a few ambulances serve a population of more than 300,000 in Doolo Zone, who are dispersed over a vast area without any paved roads, most of the time they are broken down or used for other purposes by the authorities. It forces people to find alternative means of transportation, which often involves having to pool funds to fuel private vehicles which are not available in most locations and are rare. With no public transport or money to pay, the poorest and most vulnerable are unable to access timely care. 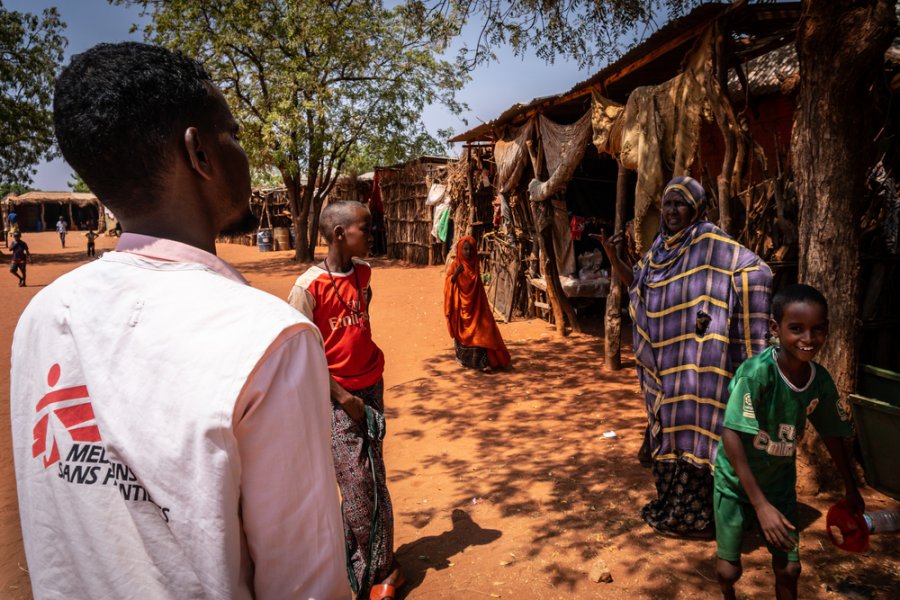 Susanne Doettling/MSF
MSF tea team health promoter supervisor speaks with people in the community in the village of Kurtunle, all mention the lack of water, and how it affects their lives.

MSF provides flexible mobile primary healthcare services in 17 mobile clinics, like the one in Ton-Habalan village. The mobile set up permits the teams to move locations quickly, following the pastoral communities to places where no health posts exist. Since beginning of 2019, the number of patients consistently increased. A good indication that we reach the right sites and communities. By the end of March, MSF teams treated over 4,500 patients, mostly for upper respiratory tract infections, skin infections and urinary tract infections. The number of pregnant women coming for antenatal care has doubled to more than 400 consultations in March. MSF’s ambulance referred an average of five emergency patients per fortnight to the hospital in Wardher town. Many emergency referrals are pregnant women with complications or with obstructed labour.

Failing rainy seasons over the past years have caused prolonged and persistent droughts. Affected pastoralist families began traveling long distances in search of water, food and grazing grounds. Unstable and unreliable food and water sources, unhygienic living conditions in cramped sites for displaced people near villages and towns, in combination with the poor coverage of health services, led not only to tensions, but resulted in disease outbreaks, malnutrition, and the loss of lives and livestock. If the rains fail again this year, the fragile balance could quickly turn into an emergency, endangering the health and lives of the most vulnerable in Doolo Zone, nomadic pastoralists and displaced communities.

MSF has worked in the Somali Region of Ethiopia since the 1980s, supporting various government health facilities.

In Doolo Zone, MSF was working in Wardher hospital and health centres in Danod and Lehel-Yucub since 2007. MSF handed over activities in these facilities to local partners in 2018. Since then, activities focus on comprehensive primary healthcare through mobile clinics, community engagement, surveillance and health promotion activities to an extensive area and to remote populations, in addition to emergency preparedness and disease outbreak response management. MSF runs 17 mobile clinics, which offer outpatient medical services and runs 30+ surveillance locations in remote areas for early disease outbreak detection, and a timely response to emergencies.