Ethiopia: Once mango season is over, crocodile season begins

Canadian nurse Rebecca DeBruyn is supervising the emergency room of Gambela hospital in Ethiopia. She shares her experience working in the busy emergency room and finds parallels between doing an Ironman Triathlon.

When Rebecca DeBruyn left the Canadian city of Peterborough, Ontario, in the end of February it was a shivering minus 17 degrees Celsius in her hometown. Snow covered the streets and people were muffled up in thick winter coats. “Well, here in Gambela we have 45º Celsius at noon. I am sweating a lot and I am drinking a lot of water,” she says two weeks later, when asked how she is coping with the staggering 62º Celsius temperature difference, beads of sweat on her brow. 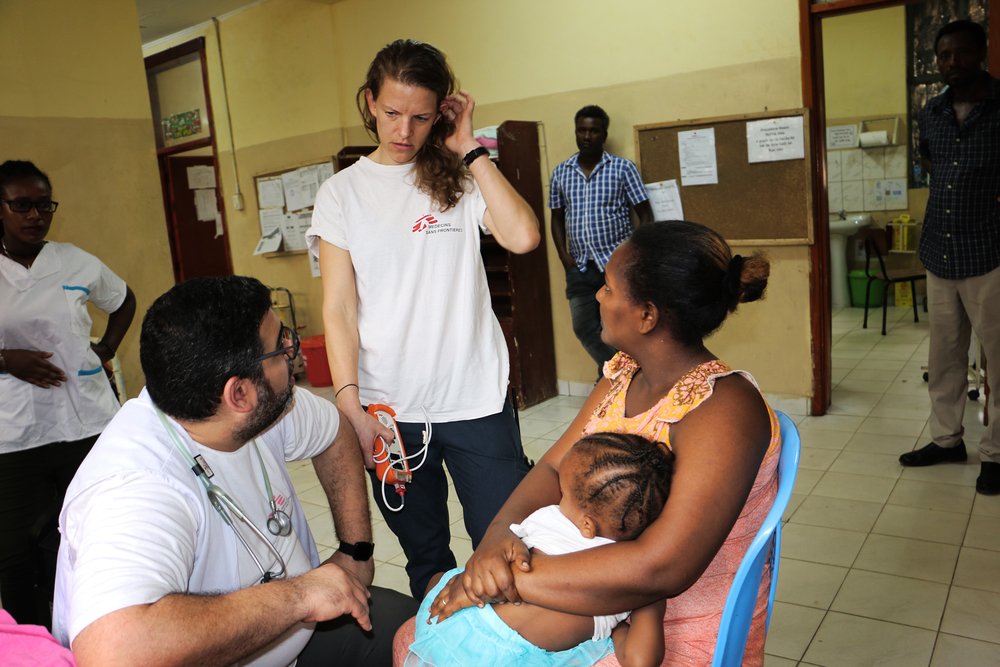 Markus Boening/MSF
MSF nurse supervisor Rebecca DeBruyn and a colleague talk with the mother of Mersif, aged 18 months, who was admitted to the emergency room of Gambela hospital the previous night with respiratory problems resulting from a bacterial infection.

The new-to-MSF nurse is listening with her stethoscope to the fast-beating heart of Mersif, an 18-month-old girl who was brought in last night to the emergency room of Gambela hospital in western Ethiopia. Mersif has a bacterial infection, causing a respiratory problem that can be treated with antibiotics. “She is already much better, and the parents are really attentive. We will continue to observe her for a few hours and then she can go home,” suggests Rebecca to her Ethiopian colleagues, before deciding who is the next priority in the busy department.

The emergency room of Gambela hospital sees a minimum of 50 emergency cases every day. The hospital is the only referral centre in the most western region of Ethiopia, which hosts more than 400,000 refugees from neighbouring South Sudan. MSF started supporting the health facility in early 2017, working in the emergency room, maternity unit, operating theatre and surgical inpatient ward. Since then, the number of patients has increased constantly, as MSF is providing free and quality medical services, which are well accepted by the host population and refugees alike.

“I actually went into nursing to do humanitarian work,” Rebecca explains when asked what brings her from Canada to this hospital in the Horn of Africa. “That was always my motivation. I had worked already in the remote areas in the north of Canada. With MSF I respect the principle of being uninfluenced by the powers that be. I like its independence – we’re not influenced by money from sources we might not agree with.”

She remembers her first patient in Gambela: a small boy aged just two months. When he came into the emergency room he needed resuscitation. He had severe watery diarrhoea and was completely dehydrated. No normal intravenous access was possible, so they had to put an intra-osseous in his leg instead. “The poor boy had lost so much volume so quickly. For four days we kept him in to treat the acute gastroenteritis – he would have died without it. He went home, chubby and smiling,” Rebecca says with a smile on her own face.

What strikes her most about this new environment are the finite resources and the lack of diagnostic instruments. A cardiac monitor, for example, is not standard in this kind of setting, so it is difficult to follow a patient´s heart rhythm. “I’ve never worked like this before. You do your best possible clinical diagnosis, and treat, but you can be wrong and you change. It’s okay when you are in a situation where you have that time, but if not... When you are resource-limited, you have to trust your clinical judgement,” she says with a touch of self-doubt on her face.

While still reflecting about what she just said, Rebeccas’s gaze wanders along the iron cradle beds and rests on a boy who was recently brought in. Language is a problem, and she asks an Ethiopian colleague for help. Meer is a little boy from a refugee camp near Gambela. The doctor expected acute gastritis and her colleagues have already put in an IV line. Rebecca checks again on the lethargic boy and makes sure the instructions of the doctor have been followed correctly. 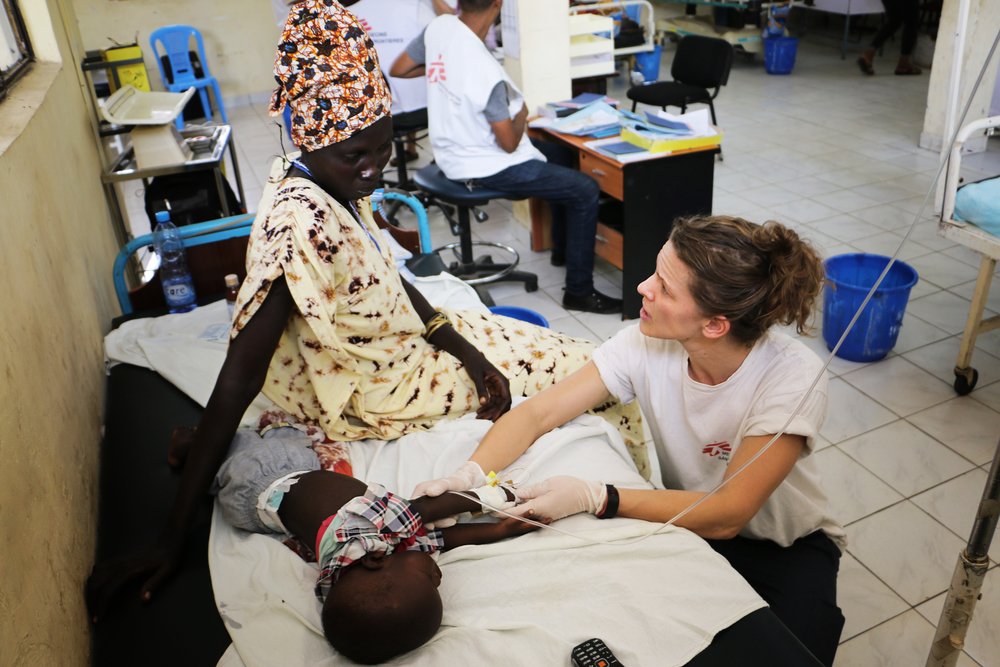 Markus Boening/MSF
Meer, who has suspected gastritis, is cared for by MSF nurse supervisor Rebecca DeBruyn while his mother looks on, in the emergency room of Gambela hospital, Ethiopia.

She admits that she didn’t expect such a huge part of her work to be managing her staff and the department rather than being hands-on with the patients. “My steepest learning curve has been the managerial aspect,” she says. “But I am so impressed with the commitment shown by many of the local staff. Many of them come from other places in Ethiopia and see their family just three times per year. They may have been working several years with MSF – this is people´s whole career.”

Rebecca pays a quick visit to the laboratory, asking for some malaria results. The disease is a huge problem, and cases at this time of year are increasing quickly. “But it’s not only malaria season now,” she says, peeling a mango during a short break. “Currently we have many mango-related injuries, especially with older children climbing the trees and falling down. We have a lot of fractures because of this – five in the past two weeks. Luckily there is an orthopaedic surgeon.” She bites into the fruit and takes a deep breath in the sizzling heat. “I have a daily mango here. That helps me cope with the heat – at least that’s what I believe.” 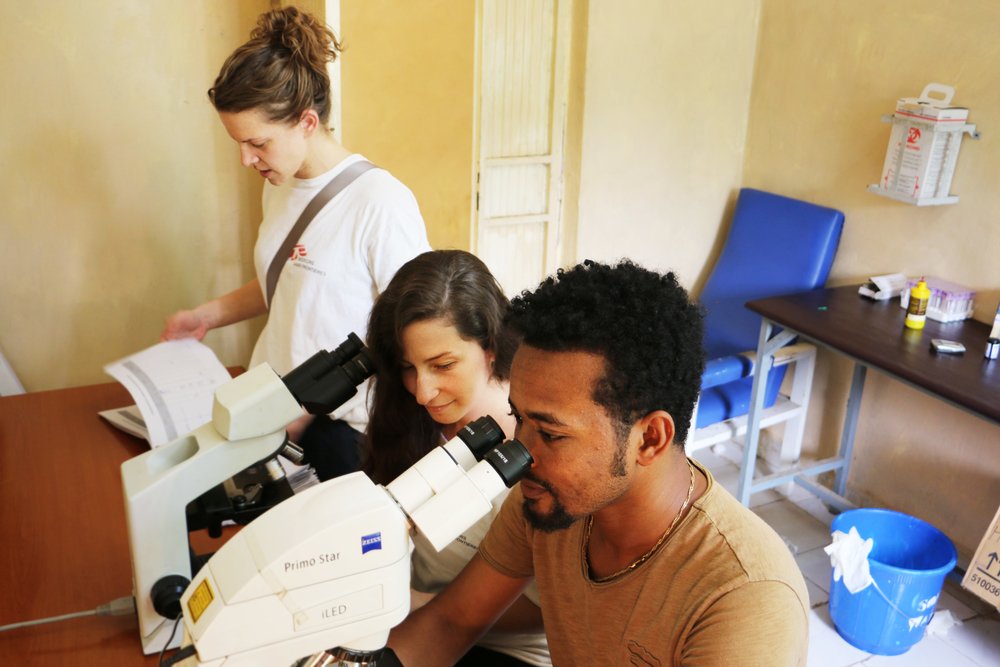 On the far horizon, big dark clouds are collecting and the smell of rain is in the air. Rebecca looks into the darkening sky. “Apparently once mango season is over it becomes crocodile season, towards May. That's when the river water rises after the start of the rainy season, and the crocodiles get closer to the riverside, where people are bathing and washing clothes. So attacks by crocodiles will be on the new agenda in the emergency room.”

After her break, Rebecca takes the chance to visit Bantol, in the surgical inpatient ward. Bantol is a 12-year-boy who fell off a tree and needed a fixation on his lower leg. She wants to know if he is going to climb after more mangos once his leg is fixed. The question makes him laugh and shake his head. 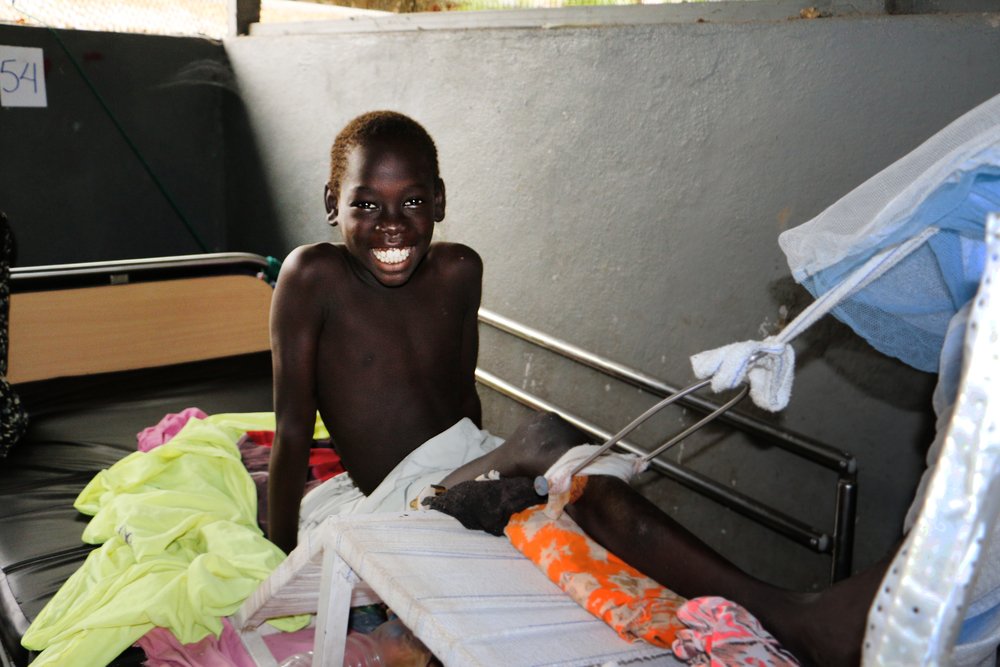 Markus Boening/MSF
Bantol, aged 12, was climbing a mango tree when he fell, injuring his leg. He is being treated at Gambela hospital, Ethiopia.

After the short visit, Rebecca rushes back to the emergency room. Her job is stressful, but she is bursting with energy. “We all have our stressful moments when we feel unprepared or full of doubts, but I have no regrets about being here. There are moments that seem way over my head, but at the same time I have the feeling of picking up the game. I love being here.”

When Rebecca helps a patient up, her biceps show under the MSF T-shirt. She did an Ironman Triathlon in the past. “I only did one. But I see a lot of parallels between an Ironman and my job here. It is a huge goal to accomplish and it is not going to happen in the first stage. It is all about pacing, knowing your strengths and weaknesses – knowing when you can really give, when you need to just get through it. And you have to look at the whole span. If you focus too much on the first hour, you’ll never succeed.” Being with MSF for the first time in Gambela hospital’s busy emergency room seems to require exactly the same endurance and stamina.