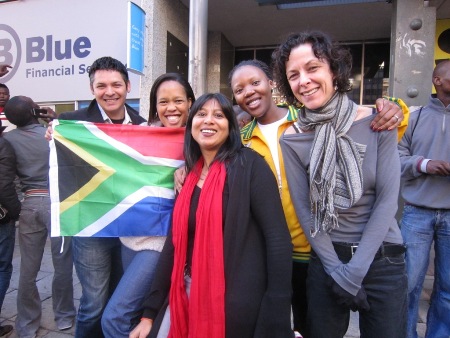 Extra Time Blog Post 2: The South African Samba, can you feel it?

Post 2: The South African Samba, can you feel it?

The World Cup spirit is felt everywhere here in Khayelitsha! Since I arrived a year ago from Brazil to work for MSF in this impoverished township near Cape Town, I have never seen the patients so proud as today! They come to the clinic wearing their yellow and green Bafana Bafana jerseys, so excited about their national team playing in the opening match today in Africa’s first ever and their very own World Cup. Football is the most popular sport in Khayelitsha and you can see children kicking a ball on almost every street corner! This sport is so central to these communities.

I often feel at home here, given the similarities between my country, Brazil, and South Africa. On Wednesday, we had a huge “vuvuzela break” during the lunch time. You couldn’t hear anything else but the blaring sound of vuvuzelas! Everybody keeps on asking: “Can you feel it?!” The excitement and patriotism of our patients really resonate through the sound of vuvuzelas!

In Africa alone, 500,000 children died because of AIDS in 2005. And today, we know that millions of African babies won’t live to see their second birthday. It’s a sad reality that none of us should forget. Nonetheless, the great sport event that kicks off today is a good opportunity to raise awareness about HIV/AIDS not only in South Africa but over the world as well!

Even if Bafana Bafana do not win the title, they will have proved how much energy people in this country can dedicate to a cause. I believe South Africa is making all possible efforts to win the battle against HIV/AIDS epidemic and this is really impressive. In Khayelitsha alone, we have 14,500 patients on antiretroviral treatment for HIV/Aids and hope to finish the year with 20,000 patients. The success of this township in its fight against the disease has been made possible thanks to the concerted effort of South Africans but also because of additional funds received from outside sources such as Global Fund. The concern now is that if funding dries up, these successes will be reversed and maybe the situation will worsen again.

South Africans have a burning passion inside them that can produce incredible changes. The World Cup has just highlighted this for me. I wish them all the best in keeping that passion alive through this long walk they have embarked on.

P.S. I am supporting Brazil and South Africa and will be very happy if one of my favourites win the trophy this year. :-)

Medecins Sans Frontieres (MSF) has been running an HIV/AIDS programme in Khayelitsha in partnership with City of Cape Town health authorities since 2000.