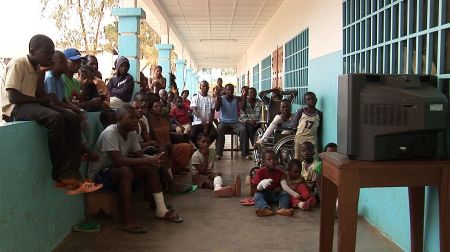 Patients in the MSF-ward of the hospital in Akonolinga, Cameroon, watch their national football team competing in the Africa Cup, January 2010. Photo by MSF.

In January this year I travelled to Cameroon to make a health promotion film that featured Sylvestre, a patient who motivates others to seek treatment. Sylvestre is a soft spoken man in his 30’s and at the hospital in Akonolinga town in East-Cameroon he is the master of the television set – especially when there is football to be watched. During my visit the national football team was competing in the 2010 Africa Cup of Nations in Angola.

Outside the hospital ward built by MSF, around 50 patients suffering from the rare skin disease Buruli Ulcus were huddled around Sylvestre’s TV to watch Cameroon’s compete in the 2010 Africa Cup of Nations in Angola. There was an almighty cry and shout at every shot at goal, but their pride and hope was not rewarded. Cameroon was defeated.

Sylvestre is an ardent football fan and he loves to talk about his hero, Roger Milla, once voted Africa’s best player. It seems that for Cameroon, every decade holds a challenge and a possible victory. In the 1990 FIFA World Cup, the national team surprised the football world when then 38-year old Milla scored four brilliant goals, securing Cameroon’s place in the Quarter Finals. Never before has an African team performed better in the World Cup tournament. Before Milla’s and the Cameroonian team’s performance on that year, naysayers wrote off African teams as serious contenders. “No discipline,” said some. “No endurance,” said others.

Ten years later Cameroon stood facing a far larger challenge, a challenge against all odds. And here MSF was able to play its part. In 2000, MSF set up its first HIV treatment programme in Cameroon’s capital Yaounde and delivered proof: those first patients leapt at the chance of a new lease on life and stuck to their treatment with determination.
Naysayers again said Africa had no money and no medical facilities, and they thought that African patients lacked discipline to adhere to treatment.

Now in 2010, the Les Lions Indomptables (The Indomitable Lions) and people living with HIV/AIDS (PLHWA) in Cameroon are facing new challenges again both on the field and in the treatment clinics. In football Les Lions Indomptables are qualified to be around the best of the world. But in the match against HIV/AIDS, Cameroon still has a long way to go. At present only half of the people in need of ARVs receive treatment. So to use a football metaphor: For 11 people on the field battling HIV with ARVs, there are another 11 on the bench, waiting desperately for treatment.

But one out of 11 players develops resistance to ARV drugs. Patients face the old barriers of second-line HIV treatments being too expensive and complex to administer. Again, MSF together with Ministry of Health set out to deliver not only treatment, but proof that it is possible yet again.

As Cameroonian football fans prepare to cheer on their team to victory, scores of patients are sure to huddle around Sylvestre’s TV again in Akonolinga. And as Cameroonian Lions find the back of the collective roar will go up signaling the pride and hope of a nation for their team and for people living with HIV and AIDS.

find out more about msf's work in cameroon