April 11th 2022 - “The severity, scale and speed of the war in Ukraine have created simply enormous needs and suffering,” says Dr Joanne Liu, an experienced paediatrician and member of MSF’s emergency response team who is just back from Ukraine. 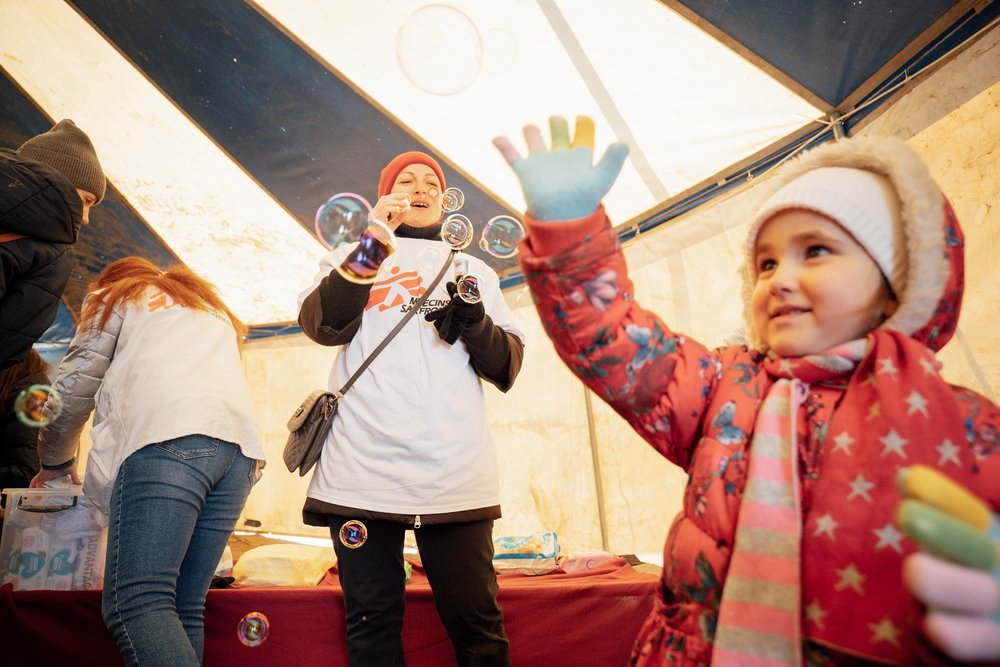 “It is clear that the Ukrainian medical system is robust and its capacity to rise to the challenge is impressive,” says Dr Liu, who visited Ukrainian hospitals to help assess their needs and discuss how MSF can help.

“The best thing we can do is listen closely and understand the specific areas where our support can provide real added value. We have identified several key areas where our humanitarian and medical support can be of real, practical and sometimes directly lifesaving benefit.”

From the start, there was a clear need to get the right medical supplies to the right hospitals as quickly as possible. This began with urgent calls received from hospital staff close to frontline fighting and bombing who mostly needed surgical, trauma and wound care medicines and supplies. Lately this has widened to include medicines for diseases such as asthma, hypertension, HIV, hypothyroidism and tuberculosis. 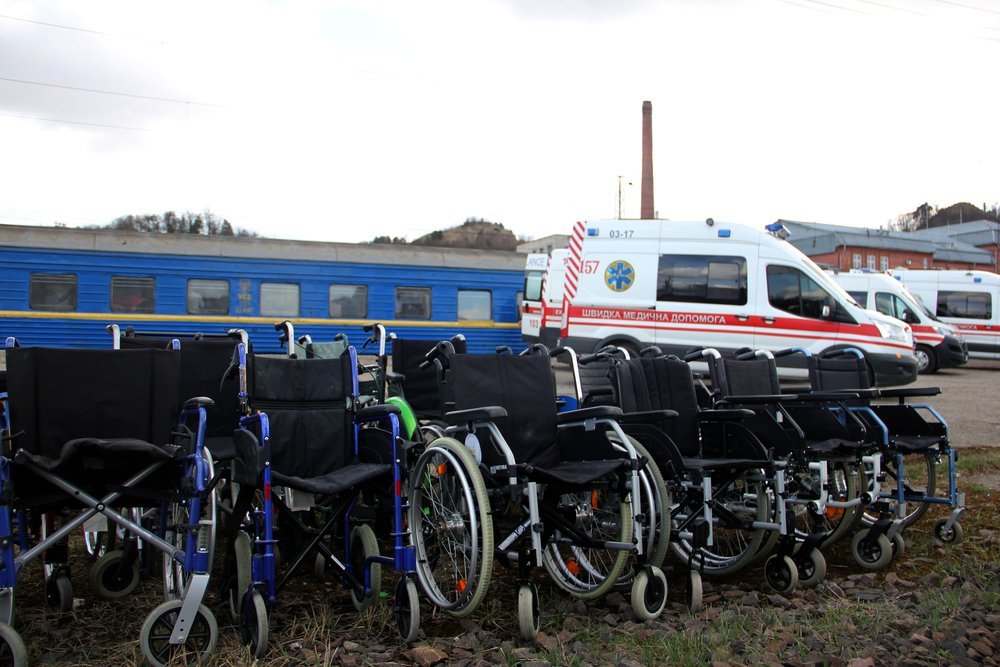 Maurizio Debanne/MSF
MSF, in cooperation with the Ukrainian railways and the Ministry of Health, has just completed a new medical train referral of 48 patients, coming from hospitals close to frontlines in the war-affected east of the country. (April 2022). To date, MSF has evacuated a total of 114 patients. The details for this fourth referral are: Fourth train referral: 09 and 10 April 48 patients medically evacuated from near to Kramatorsk 1 patient referred to a hospital in Kyiv en route 47 patients transferred in Lviv Patients brought by road from Bakhmut hospital, near to frontlines in Donetsk region, and from Sloviansk hospital, also in Donetsk region Some elderly patients from long-term care facilities, but majority of patients trauma wounded

MSF opened a major distribution warehouse in the western city of Lviv and subsequently opened other warehouses in other locations in Ukraine.

To date, MSF has brought more than 225 metric tonnes of medical and relief supplies into Ukraine, much of it already dispatched to hospitals and health centres, or to the Ministry of Health for onward transport to the places where it is most needed. Moving supplies around a country at war is not easy, but our teams have found the Ukrainian Railways to be invaluable.

Further distributions of of relief essentials

We have also brought in five shipping containers filled with thermal fleece blankets, sleeping bags, warm clothes and hygiene items (such as toothpaste, toothbrushes, soap and towels) and given them to local civil society organisations in Lviv to distribute to people arriving in the city from elsewhere in Ukraine or making their way towards the country’s borders. We have done further distributions of relief essentials in Kyiv, Kharkiv and other locations. 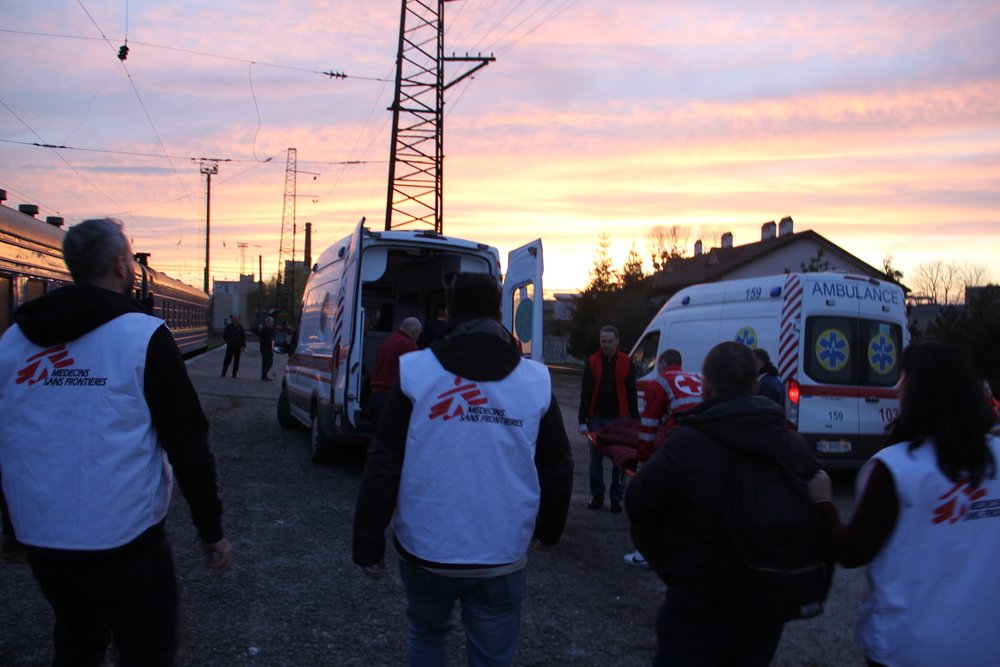 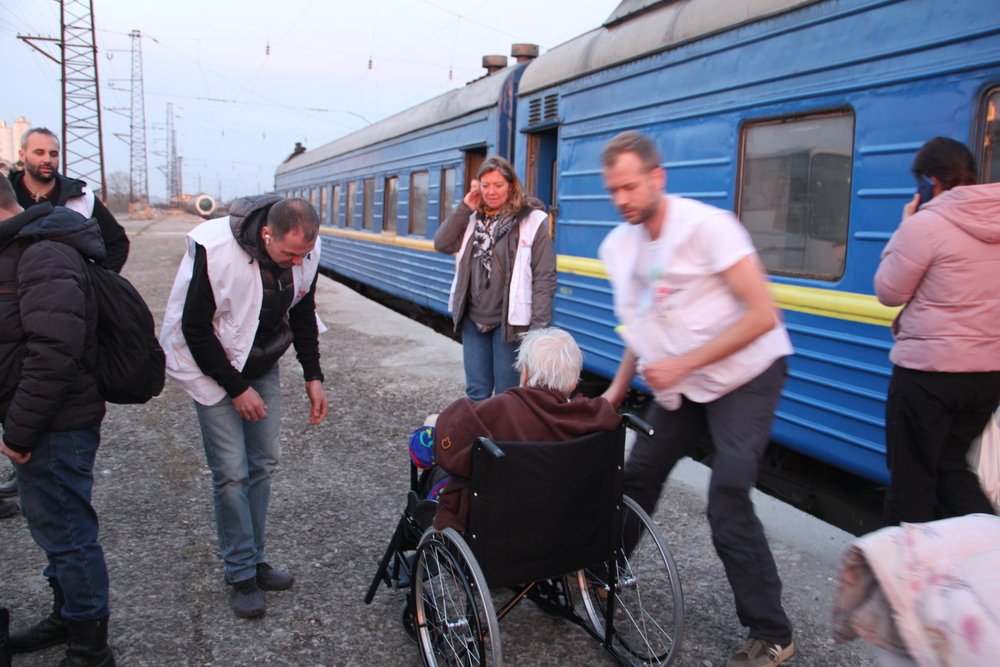 Three further referrals by this train were from hospitals close to frontlines of the war in Donetsk and Luhansk regions. A total of 114 patients have been medically evacuated to date, with their family members. Further medical referrals by train are planned as the urgent requests from hospitals in the east continue to grow, while a larger and more highly medicalised train is being got ready for use.

“When a hospital receives many patients at one time, we call it a mass casualty situation – when you don’t have enough resources and the patients have too many needs,” says Barbara Maccagno, Emergency Medical Coordinator in Ukraine. 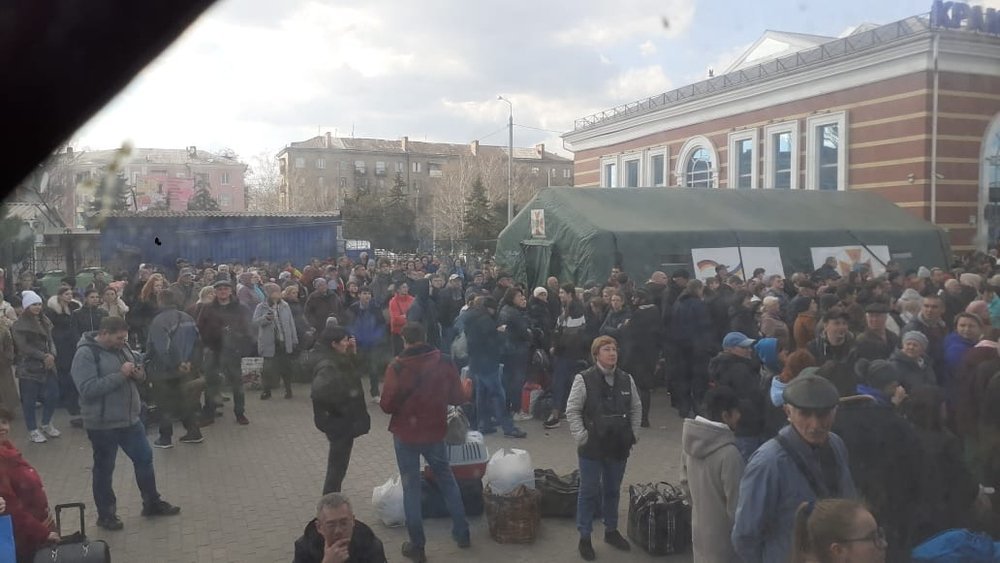 “One of the most effective ways to save as many lives as possible is to have systems to help you quickly triage the most severe patients who need to be treated right away, and the patients who are less severe and who can wait a bit longer. It can be learned quite easily, but it does have to be practised, as it is different from the usual way that hospital admissions work.” 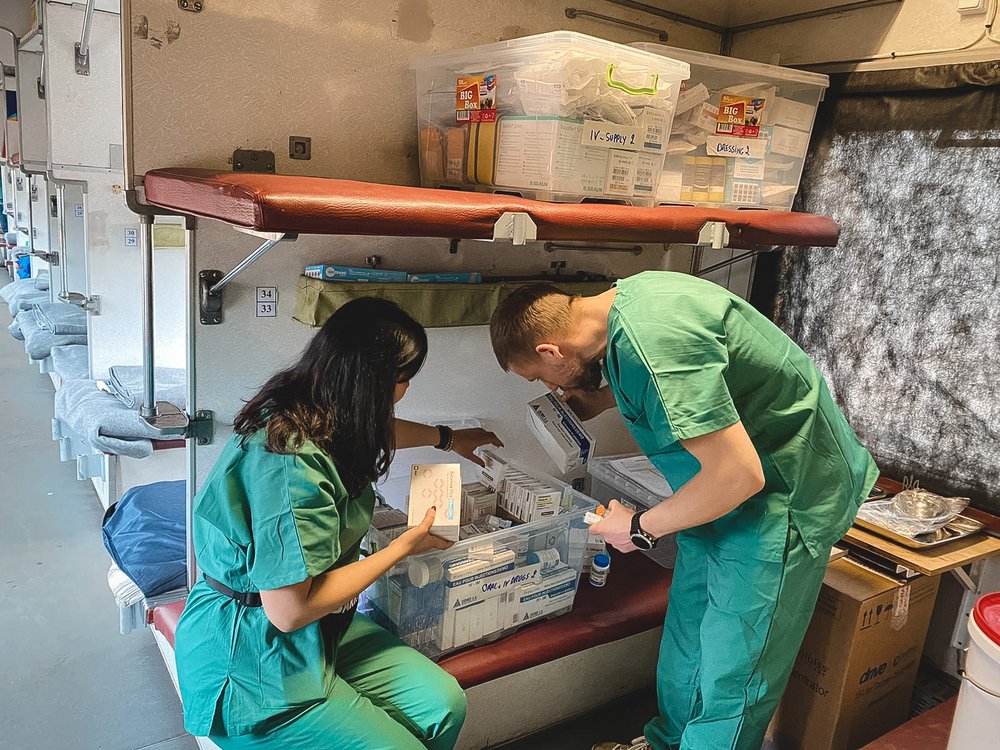 /MSF
Part of the MSF medical team on the train, preparing to admit patients in the town of Zaporizhzhia. (April 2022).

We have conducted these mass casualty trainings in hospitals in Berehove, Bila Tserkva, Dnipro, Kharkiv, Kyiv, Lviv, Mukachevo, Odesa, Orikhiv, Vinnytsia, Zaporizhzhia, and in hospitals in and around Zhytomyr.

Some of the MSF training teams have included experienced war-trauma surgeons who have given additional hands-on practical training in surgical techniques for extraction of bullets and shrapnel and wound cleaning.

Before the war started, we were treating tuberculosis patients in Zhytomyr; we will continue to seek ways to support them in their treatment, although this is challenging when people are on the move. 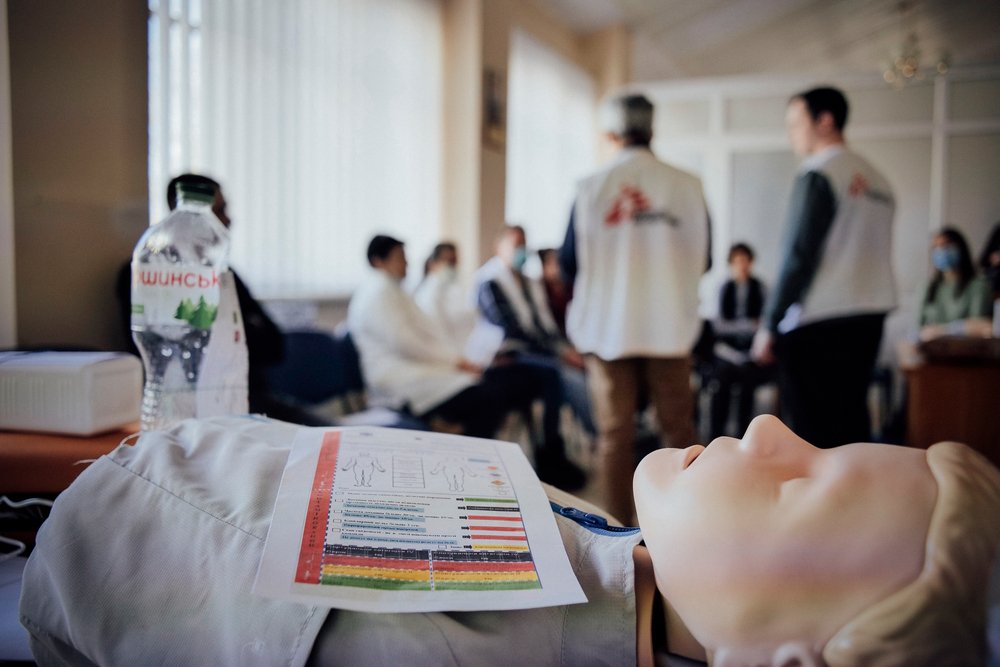 MSF/PETER BRAEUNIG
View of a training to manage mass influx of wounded given by MSF Staff. (March 2022).

In Kyiv, MSF has established a telephone hotline for people with non-communicable diseases, which can be used by elderly and vulnerable individuals to get their medication delivered at home. In Kharkiv we are running mobile clinics for people sheltering in metro stations, many of whom are suffering stress and psychological trauma due to the war.

In Chernihiv, we provided a substantial donation of medical supplies to one of the hospital in the city. We have also set up mobile clinics in neighbouring villages and in the city to respond to health needs. 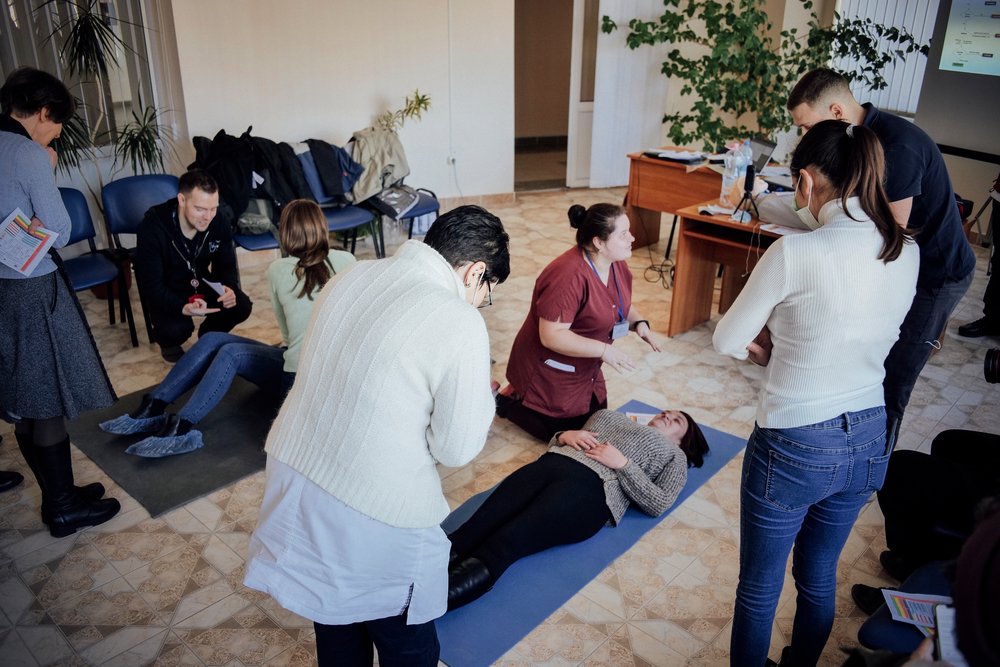 Our teams are also starting to provide mental health support to people who have fled areas of more active fighting and have gathered in Kyiv, Vinnytsia and Berehove or are transiting through Zaporizhzhia. In and around Dnipro, we are providing essential relief items for people who have managed to escape Mariupol and the Donetsk region.

The greatest needs are undoubtedly in places with active warfare that our teams cannot reach. Civilians trapped in besieged cities need safe passage to locations of their choice. 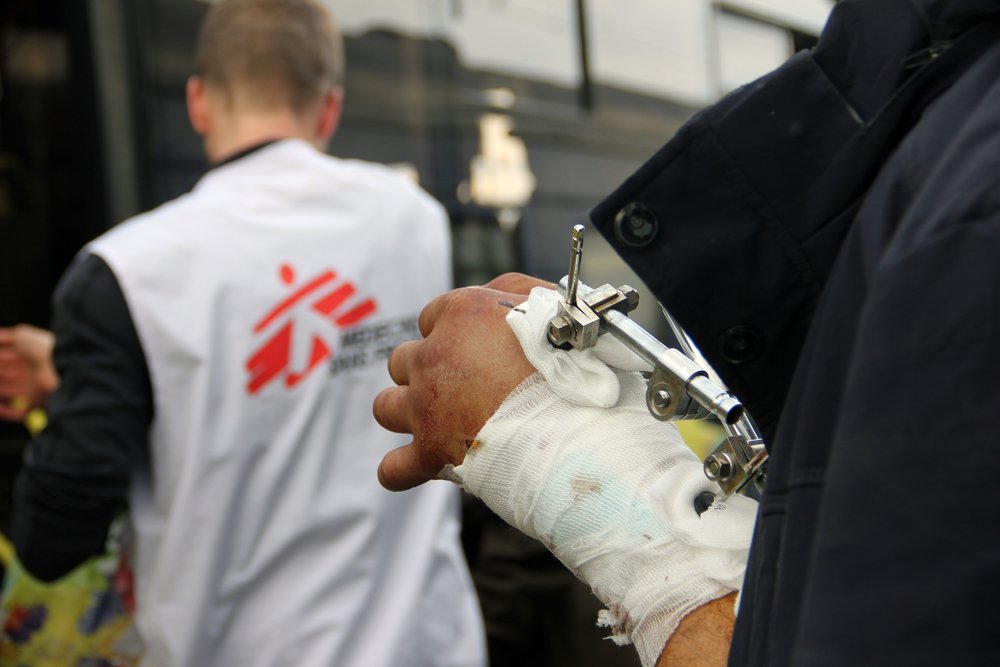 Humanitarian supplies must be allowed to reach areas where civilians are in dire need. Civilians must be protected under the rules of war and international humanitarian law, in all places and at all times.

More than four million refugees have fled Ukraine for neighbouring countries, according to UNHCR. In most of these countries, there is massive solidarity to welcome and provide assistance for Ukrainians, and we do not intend to duplicate these activities. 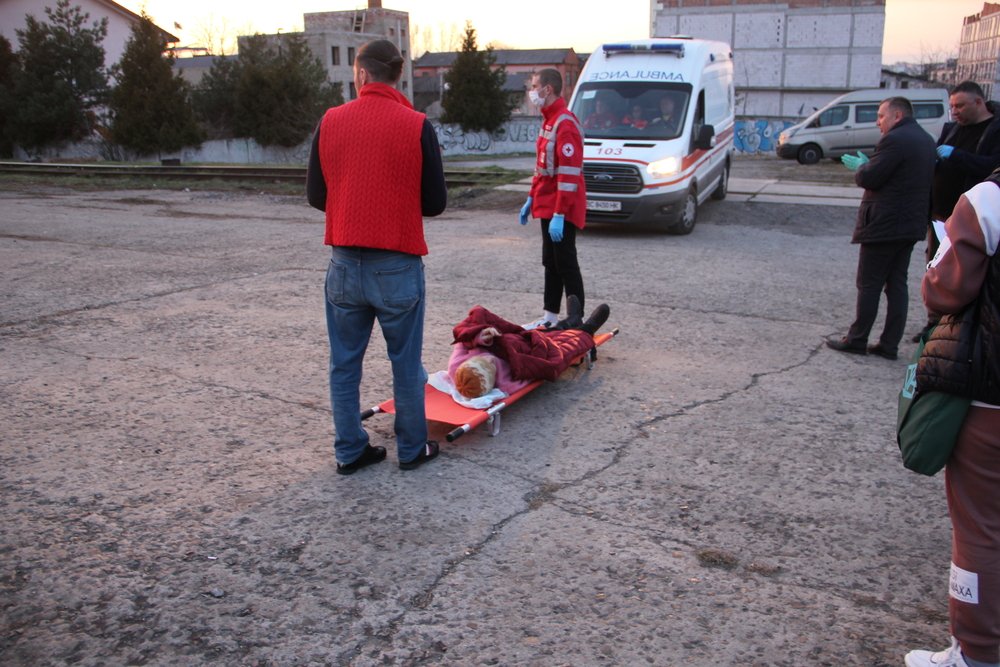 Maurizio Debanne/MSF
MSF’s third medical train referral in Ukraine: arrival in Lviv. 06 and 07 April – 40 patients evacuated by train from #Kramatorsk. One transferred in #Kyiv and 39 transferred in #Lviv This follows after another evacuation the previous day of 17 patients from Kramatorsk to Dnipro. We heard the horrific news on the morning of 08 April that Kramatorsk station had been hit by one or more strikes. “I am horrified by reports of bombing or missile strike today on Kramatorsk station. We were there yesterday, and we saw hundreds of people crowding the station, trying to leave. The hospitals had been urgently calling us to evacuate their patients by train. Most came from #Sievierodonestk and other towns in #Luhansk region. We were just in time with this train. Big questions whether we will be able to go back to evacuate more people.”

In countries bordering Ukraine, our teams are running clinics providing medical care and mental health support at border crossings and sometimes on both sides of the border; we have made donations of medical supplies; and we are supporting local civil society groups, for example by training them in psychological first aid. 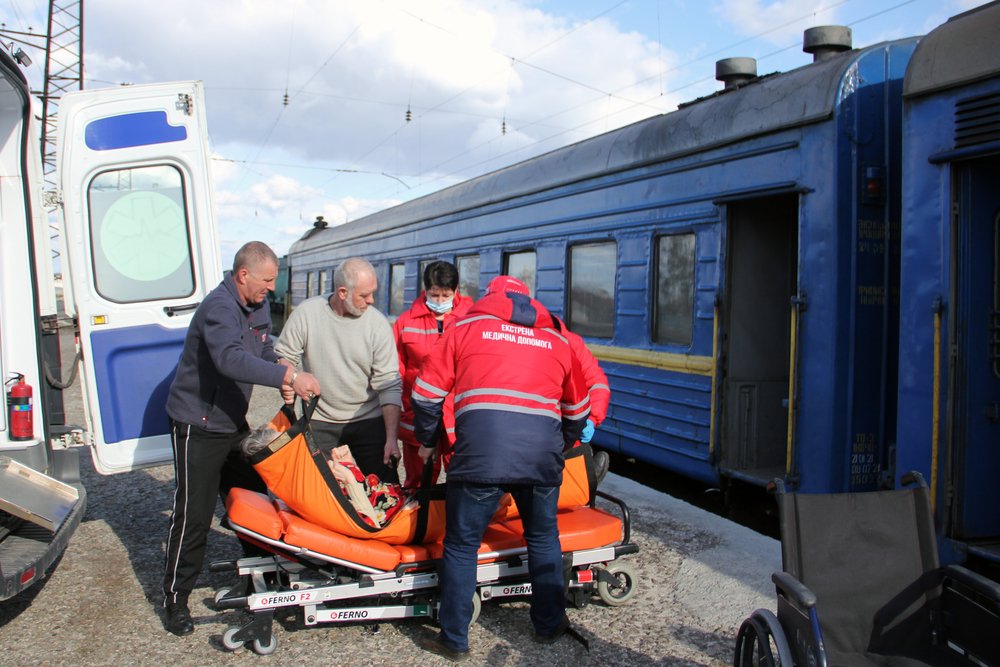 Maurizio Debanne/MSF
New medical train referral of 48 patients, coming from hospitals close to frontlines in the war-affected east of the country. (April 2022).

While it is heart-warming to witness the solidarity shown to Ukrainian refugees by individuals, we note with distress that the governments of EU member states continue to demonstrate strongly repressive approaches to safe passage for refugees of other nationalities arriving in Europe. We urge safe passage and dignified reception to be extended to all people arriving in Europe as migrants, asylum seekers or refugees, wherever they arrive and by whatever means.