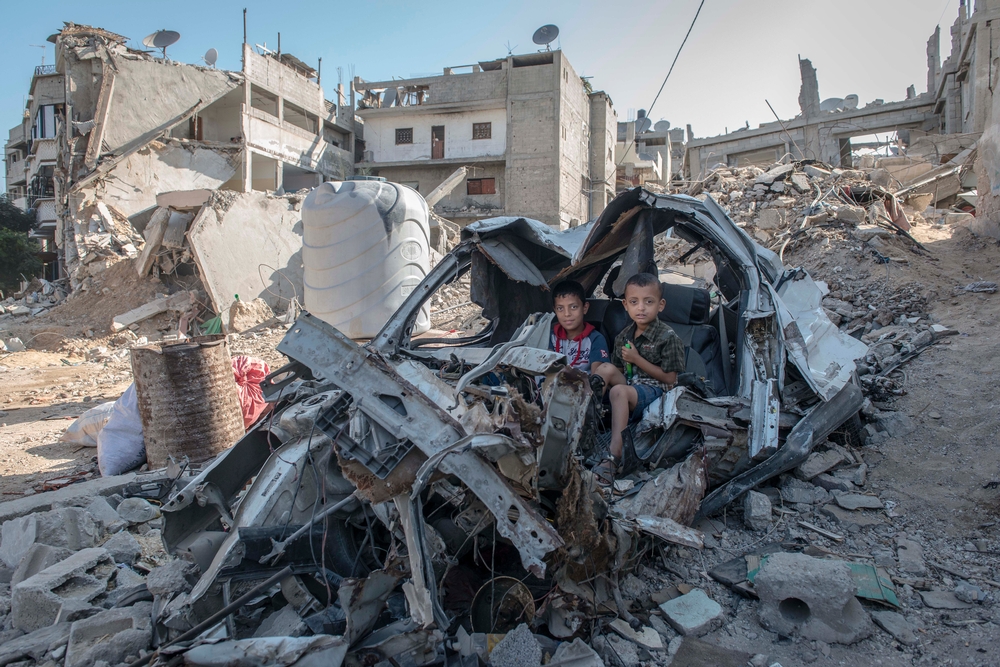 Gaza: between relief and pessimism

With bombs falling since July 8, the Palestinian Territory returned to a semblance of calm on August 26. The human and material damage is immense and the political and economic situation does not give cause for optimism.

When the unlimited ceasefire was announced, the streets of Gaza – until then travelled only by heroic ambulance drivers – filled with jubilant crowds. Students returned to their classrooms without delay, businesses resumed their activities and fishermen went back to the sea.

The residents of the enclave were still dazed by 50 days of intense stress and emerged to discover that the area had been mutilated. The hundreds of thousands of displaced people who took shelter in schools or hospitals returned home; that is, if the building was still standing.

While Gaza City was relatively unharmed, certain areas, such as Beit Hanoun and Shejaiya, were nearly annihilated.

Dozens of residents are now crowded into housing designed for a single family, without running water or electricity. “We are seeing an increase in domestic accidents, such as burns and electrocution, that are associated directly with damage to housing,” explains Dr. Abu Abed, Médecins Sans Frontières’ medical coordinator in Gaza.

MSF has been providing support to Al-Shifa hospital, the largest hospital in Gaza, since the confrontation began. Dr. Kelly Dilworth, a pediatric anesthesiologist, describes the situation.

“What was most difficult was going from one sleepless night to the next, treating seriously-wounded people who arrived by the dozens, without knowing when it would all stop. Our Palestinian colleagues did amazing work, but that was just too much.”

The teams are still struggling to take a much-needed break.

“The most seriously-wounded patients will need dozens of operations in the coming months,” says Dr. Jan Swinnen, a vascular surgeon. “There are many people who experienced multiple traumas. They’ve suffered mangled limbs, severe burns, internal lesions and neurological problems, not to mention the psychological aspects.”

Views from Shejaaia, most affected by the bombings of all northern Gaza neighborhoods.

The Palestinian medical community is also a victim of the blockade. Practitioners in many specialties, such as reconstructive plastic surgery, have been unable to maintain their skills.

Nearly 200 patients have already been admitted to the post-operative care clinic in downtown Gaza City, which MSF has managed since 2007. A second clinic is opening in Khan Yunis, 20 kilometers south, where the needs are similar. The rooms where dressings are changed and physical therapy is provided are always full.

Amal Daban brings his 5 year-old son, Mohammad, there every other day. The boy’s injuries require specialized care. The wall of his bedroom collapsed on him when the building was hit by a shell, breaking his femur. He will soon be evacuated to Germany for osteosynthesis, an operation that is not widely available in Gaza, relative to the enormous need.

However, few patients have that opportunity.

Of the more than 2,000 deaths registered during Operation Protective Edge, more than 500 were children. The survivors’ psychological after-effects are palpable. They range from abnormal agitation to profound silence. Bisan Daher, 7, lived in Shejaiya with her parents, three brothers and two sisters. On July 21, an aerial missile struck their building.

Rescued after more than six hours buried in the rubble, she is the only survivor.  The doctors are not worried about the wound on her forehead anymore, but everyone’s attention is focused on the silent child.

Psychological trauma, especially amongst the youngest, is a major post-conflict concern.

“I can’t stop crying when I think about her,” says nurse Mohammed Wadi, his voice breaking. He has worked with MSF in Gaza for seven years. “I see my own daughter.”

“In any other conflict, civilians would have taken refuge en masse in a neighboring country,” says Nicolas Palarus, MSF’s activity manager throughout the period of fighting.  “In Gaza, there’s nowhere to go to be safe. Everyone becomes a potential target, which explains the high proportion of children among the victims.”

Gaza’s Palestinians are now condemned to rebuild their own prison which, given the buzzing drones swarming overhead, cannot even be described as open-air. The limited local industrial sector, most of which was built along the border with Israel, was hit hard.  The economic impact on production and employment is severe and will only increase Gaza’s external dependence.

While everyone is taking advantage of this long-awaited respite, the sense of pessimism is widespread.

“Nothing has been resolved politically and the situation in Gaza is only more precarious,” says Nicolas Palarus. “In people’s minds, this isn’t a post-war period. It’s a period between two wars.”