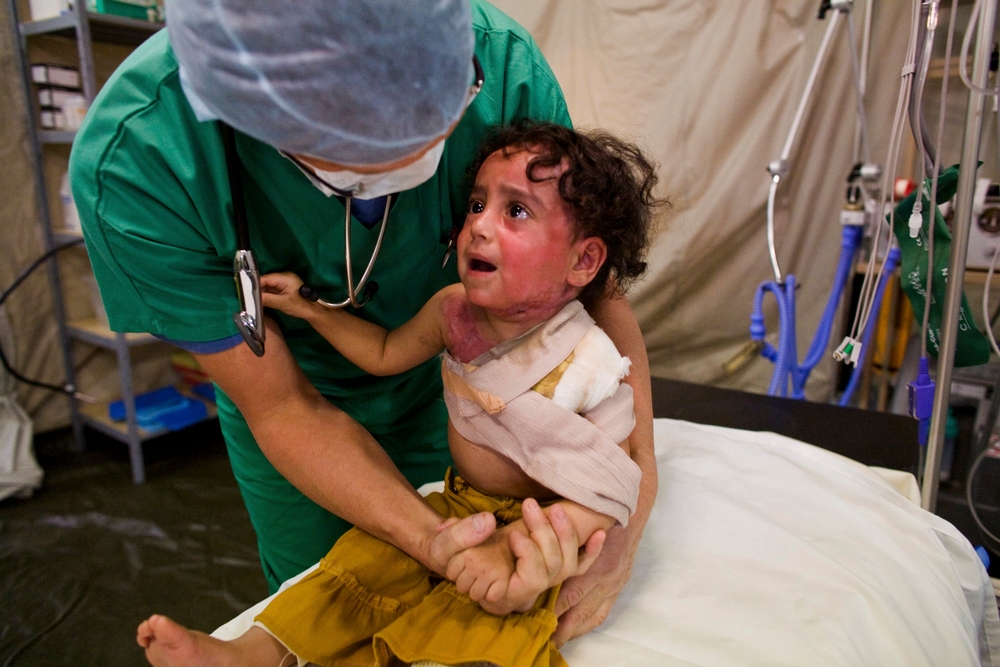 As a five-hour humanitarian ceasefire ended on 17th July, explosions were heard in Gaza City near a clinic run by the international medical organisation Médecins Sans Frontières/Doctors Without Borders (MSF). Earlier that day, MSF succeeded in sending an additional medical team into Gaza to reinforce its emergency response.

For the first time since Israel launched its military offensive, Operation Protective Edge, ten days ago, the streets of Gaza City were bustling with life yesterday.

Gaza city had not looked and sounded like that since the beginning of Operation Protective Edge ten days earlier, when shops were closed and streets completely deserted.

28 patients managed to reach the MSF clinic in Gaza City on Thursday, nearly three times more than the daily attendance numbers of the previous 10 days. MSF staff in Khan Younis and Rafah was also able to distribute dressing kits for patients living in the south of the Gaza strip.

“With this cease-fire, we have been able to reach most of our dressing patients in need of follow-up care. It may have been a breathing space of 5 hours for the people of Gaza, but it is certainly not protecting them from indiscriminate bombings during the other 19 hours of the day”, said Nicolas Palarus, MSF field coordinator in Gaza. A few hours later, a ground offensive was launched.

Bruno Stevens
From the wall, and after a mile of walking along a long grillage corridor, the ruins of the destroyed Hamas checkpoint welcome you at the entrance to Gaza. Unfortunately, it seems that more journalists than humanitarian workers are able to get in.

“Our surgeon was blocked on the Israeli side shortly after the first team entered because of paperwork delays at the checkpoint, while TV crews were able to quickly get clearance and come in for their day-trip to Gaza,” lamented Nicolas Palarus.

As a result, the courtyard of Al Shifa hospital is full of cameras and mobile studios with big satellite dishes pointed at the sky, here to cover the war show, hoping to film severely wounded children in the emergency room.

On the Egyptian side, it is not much better, as even journalists can hardly get in though the Egypt-Gaza border. The Rafah crossing point is closed most of the time, contributing to the sealing-off of the people of Gaza, and curbing the access of humanitarian workers and supplies.

The MSF team has come to support the Palestinian Ministry of Health staff in Al Shifa hospital, where most of the wounded are being admitted.  Al Shifa is the biggest hospital in Gaza, with about 250 inpatient beds and 8 operating theatres.

The surgical teams do 24 hour shifts. But on Thursday, the emergency room was not busy with severe cases. After 2pm, though, everybody started looking at his watch – the countdown started before the ceasefire expired.

One Palestinian surgeon confided that he is depressed, and told the story of a little girl admitted to his ward who had lost her mother and sister in and air strike. Her father and brother were in intensive care, but did not make it. “Yesterday, she was crying asking for her mother and sister”.

There was no need to wait for too long after 3pm. Sirens, helicopters and drones’ buzzing, echoes of detonations, usually far away, sometimes much closer, and the cycle of retaliation resumed.

More than a hundred missiles were fired from Gaza and 8 Palestinians killed in air strikes within a few hours.  And at 9.30pm, the news came -  a ground offensive has been launched.

Thankfully most of the additional surgical team managed to get into Gaza earlier, and MSF is working to get the surgeon in as soon as possible. Unfortunately, Al Shifa emergency room should be busier today.