MSF teams were ready to take care of hundreds of injured people on 30 March in Gaza as the weekly protests there had their one year anniversary. More than 190 have been killed and 6,800 shot and injured by the Israeli army during the protests. In the end, “only” four people were killed and 64 injured by live fire on 30 March. MSF’s Field Communications Manager in Jerusalem, Jacob Burns, reflects on what it means when such a devastating toll of injuries comes to be considered a “good” day.

The day was well set for drama – a storm blowing in off the Mediterranean, the sea white and the air full of dust in defiance of what was supposed to be spring. At al-Aqsa hospital in the middle of Gaza Strip the wind was whipping through a tent set up in the grounds, chilling the nurses and doctors dressed in their scrubs. This tent had been set up as part of a triage system, a way of managing the expected arrival of many wounded from protests at the fence that marks the boundary with Israel. It was March 30, the first anniversary of weekly demonstrations in which more than 190 have been killed and 6,800 shot and injured by Israeli forces. The whole of the Gazan health system was on alert, ready to receive hundreds of injured in a few short hours, just as it had done in the worst days of spring and summer last year.

At around half past two the radio crackled and the word came down: ten cases were on their way. The first siren of the afternoon cut the air and the orange and white ambulance pulled up and discharged its wounded: one young man clutching a bandage to his neck, cut by shrapnel perhaps; a still man on a stretcher, his head hit by a rubber bullet; and another youth with a bullet in his foot hopping into the tent, grimacing. The afternoon continued like that, with patients arriving together in little bursts of pain, MSF doctors and nurses assisting the Ministry of Health and another NGO with their assessment and treatment. Many had gunshot wounds to the leg, with red blood pooling on white bandages, nurses strapping splints behind the shin to keep broken bones immobilised. Some people were moaning and crying, others were silent, and others – affected by tear gas – were shaking and vomiting.

And yet an air of relief gradually spread amongst the medical teams assembled. This was nowhere near as bad as they had thought it might be after a week marked by Palestinian rocket fire, Israeli bombing and rumours of war. Egyptian efforts to negotiate calm between Hamas, the Palestinian group that controls Gaza, and Israel seemed mostly to have succeeded. It was nowhere near as bad as March 30th last year, or May 14th, or other lesser-known dates when the hospitals were overwhelmed and patients were left waiting for treatment in the corridors.

What would be unimaginable elsewhere has become normal here in Gaza. A day on which four people are killed and 64 shot with live ammunition is one on which we feel almost happy because it was not the two or three hundred – or even more – we had feared it might be. 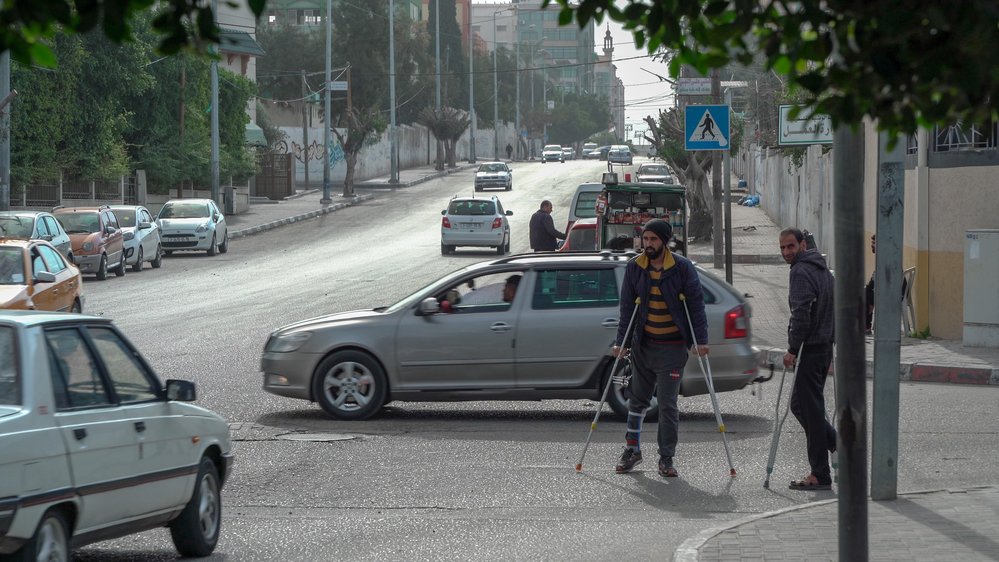 Simon Rolin
View of the street adjacent to the MSF clinic in Gaza City. February 2019. Gaza.

We must fight against this sense of normality. It is not normal to see so many young people arrive at hospital all at once with bullets in their legs. It is not normal for our surgeons to work on a 25 year old man who needed all his blood replaced because a bullet tore through both the main artery and the main vein in his chest. It is not normal for them to remove the kidney of a boy because to try and save it would mean he bleeds to death. It is not normal for our emergency doctors to listen to the lungs of a patient, hit in the throat with what was apparently a tear gas canister, fill with blood. It is not normal for us to discharge a patient from our clinics, and then to readmit him when he is shot again, only then to have his family tell us that he went back to the fence yet again and was killed.

The crossing between Gaza and Israel is now open again for the lucky few that can use it. There is talk of Israel providing more electricity and more space for Gazan fishermen in which to ply their trade. Israel expects calm from the Palestinians in return. The world’s media that came to see what would happen this weekend will mostly go home again, and Gaza will once again drift out of the headlines until violence sparks again. In the meantime, however, Gaza will continue to suffer in circumstances that its inhabitants have become used to: an economy in freefall, a health system all but broken by the Israeli blockade and Palestinian political infighting, thousands of gunshot wound patients waiting, hoping that they will heal.

We at MSF will go back to our usual activities this week, working in our clinics and hospitals across Gaza. We will admit more gunshot wound patients and continue treating the nearly 1000 that remain on our books, a living reminder of the suffering that Gaza has gone through over the last year. However, as we return to the routine we all have to do our best to remember – despite the small hope that an agreement could partially change the situation of the Gazans – that this is not over and that this is not how people should live. This is not normal.